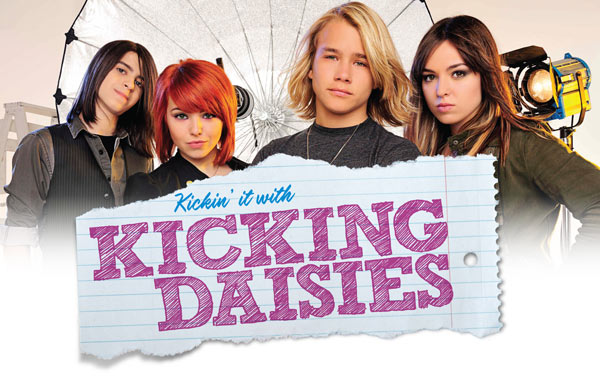 Recently named Radio Disney’s “Next Big Thing for 2010,” Kicking Daisies has a lot to be thankful for these days. The band members—Duran Visek, 15, vocals and guitar; Ben Spremulli, 14, lead guitar; Carly Kalafus, 15, vocals, guitar and drums; and Caitlin Kalafus, 18, bass and vocals—have been making music together since 2008 and are on the fast track to celebrity stardom. Ocala Style recently caught up with Duran Visek to find out about what life has been like since becoming The Next Big Thing.

Congrats on being named The Next Big Thing for 2010. What was that like?

We got the phone call December 3 from Ernie D. He’s Radio Disney’s number-one DJ and it was really amazing. We were actually playing a sold-out show in our hometown that night so it made the show extra awesome.

How did you get involved with The Next Big Thing?

We had a bunch of videos online on YouTube, and they found us and asked us to be involved in the competition. They took five artists from around the country and promoted each band for two weeks. After each artist had their promotion period, people had the opportunity to vote for their favorite artist. That’s how we won.

And now you guys have a video on MTV? I imagine that’s crazy for a group of teenagers.

Was the video as much fun to make as it looked?

We filmed the video in mid-September. It was like a big party. It was also a lot of “hurry up and wait,” but that’s pretty much how everything is when it comes to the music business.

Being teenagers in the music  business, I bet you all have really supportive parents.

Ben, the youngest, lives 15 minutes away from everyone in the band so his parents, for the past two years, have been going back and forth to practices. There’s a lot of support all around and our parents really believe in us.

Only two more years until he gets his license, huh?

I checked out your website and each one of you listed Paramore as the band you’d most like to tour with. How would you compare your music to theirs?

We have a lot of fast-paced songs and we put a lot of emotion into it. Paramore has been doing it for so long that it comes to them naturally. I think we like to model our show after them. They’re good role models for a band. We actually played at Bamboozle [Festival] in New Jersey when Paramore played and got to meet them after the show.

Since being named The Next Big Thing, have you done a lot of traveling?

We have! We’ve been to Los Angeles four, almost five times, and we’ve been to Florida twice.

How do you guys juggle school with your band responsibilities and traveling?

We do work in our spare time. It’s actually a bit tough to get all the schoolwork in, but it happens. Caitlin and Carly’s aunt teaches us and we do online stuff at home.

You’re obviously a great young musician. Were you one of those three-year-olds who would walk around belting out tunes?

That was me. My dad had guitars hanging on the walls when I was growing up. I basically got into music from The Cure, Marilyn Manson. I listened to everything my parents listened to. Green Day is actually what really turned me on to wanting to be a musician.

Radiohead is a big influence, Jack’s Mannequin. Alice in Chains was always huge. The list goes on. I’m open to everything really. Based on rock ‘n roll, though.

Caitlin and Carly are sisters, but were the rest of you friends as well? How did Kicking Daisies form?

It started with Ben. He was playing in local bars and shows. He met Mike Mangini, a producer who did Joss Stone, the Baha Men, the Jonas Brothers. Ben wanted to start a band of his own. He found me through a list of connections. At the time I was in Florida basically doing some online stuff. I came up to meet Ben, and he was 12 or 13 at the time and shredding like crazy on the guitar. He had long hair and was a tiny little kid. We clicked immediately and wanted to start a band. We found Caitlin on YouTube. She had two million hits. It was crazy. Started jamming and writing some songs. We needed a bass player, so Caitlin convinced her sister Carly to come and learn to play bass. She learned in an hour and we’ve been a band ever since. That was in 2008.

How did the band get its name?

We were trying to figure out something that would represent there being two girls and two boys in the band. Our tour manager said, “Guys, I have something really cool. It’s like a light-heavy theory—Kicking Daisies. What do you think?” We thought it was awesome so we stuck with it.

I know you guys play your own instruments, but do you also write your own lyrics?

Caitlin and Carly write all the lyrics, and Ben and I do the music.

It starts with Caitlin most of the time. In my opinion she’s like a musical genius. She brings lyrics to rehearsal and they’re always so consistent and good. We’ll write it up and that’s it. There’s a Kicking Daisies song.

We’re all looking forward to seeing Kicking Daisies at Kidfetti later  this month. Have you ever been to Ocala before?

I lived in Cape Coral, Florida, for 10 years. I’ve passed through Ocala. We went to Ginnie Springs.

What are you most looking forward to with the Kidfetti show?

I’ve heard it’s a very uplifting, spiritual event. It’s going to be a great time. We plan to play a lot of new songs and have a lot of fun.

No doubt music takes up most of your time. What else do you enjoy doing?

I’m not even joking, when I’m not playing or practicing music I’m making music. I play video games, but I’m just based around music.

So what, in your opinion, is the hardest thing about being in a band?

There’s a lot of rules. You have to wake up early, you have to warm up, be consistent, be on your game 24/7, be respectful, be good with fans, you gotta be on time. The hardest part is that you always have to be on your A-game.

Do you recall your first big “holy cow” moment as a band?

The first big event we ever played. It was sold out at a local theater and it was so amazing. We had been waiting to play the show for like three months and when we rushed the stage the crowd just went crazy. It was a huge moment for us. Immediately after we won the NBT, we played Celebration, Florida, for like 17,000 people. Easily the biggest crowd we’ve ever played for.

Do the crowds make you nervous?

I’m actually more nervous when it’s a smaller crowd. It’s a little more intimate and you have to be more spot-on. It’s a big adrenalin rush.

Where do you see your band in, let’s say, three years?

Hopefully we’ll be on and off tours. Right now we’re just having fun. I’m sure we’ll still be together in three years, though. That’s for sure.

Center Stage
Check out the acts that will be performing alongside Kicking Daisies at this year’s Kidfetti show.

Hailing from Music City, USA (that’s Nashville, Tennessee), daughter of former NFL player Mike Jones and vocalist Javonda Jones, Coco Jones is a force to be reckoned with. Performing since the age of nine, Coco’s self-titled debut album became a best-seller on iTunes and eBay. She was also a finalist for Radio Disney’s 2010 Next Big Thing.

Inspired by the greater artists of yesteryear, brothers Jordan and Josh Garneau have successfully fused the old-school styles of blues, jazz, funk and R&B with a fresh combination of guitar and drums. The Ocala residents recently completed their debut album Road With No Signs, produced by five-time Grammy winner Bruce Swedien.

Diagnosed with autism at two years of age, Gina Marie Incandela was helped by early intervention music therapy to realize her passion for singing. The little girl, who couldn’t speak until age three, is now one of the nation’s most in-demand anthem performers. Not only has she performed the national anthem at major sporting events across the country, she has just released her first CD, I Dare To Dream.

Kidfetti Activity Booths open at 9am