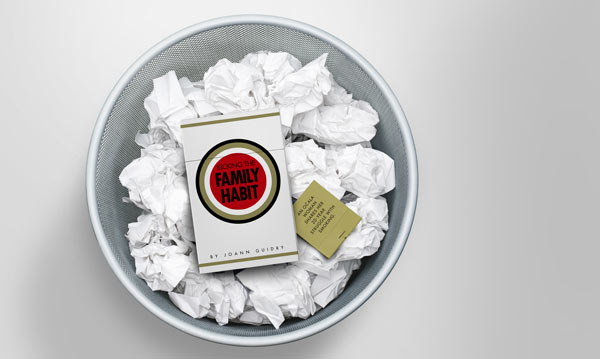 “When I was growing up, everyone smoked. It was just the way it was,” says Stephanie, 35. “Family and friends would come over to our house for a weekly card game and our house would just fill up with smoke.

And Stephanie remembers that her parents did try to stop smoking many times.

“My mother would gather up all the cigarettes in the house, including the butts in ashtrays. She’d put them in glass Mason jars and fill those up with water,” she recalls. “And then she’d put them around the house to remind her and my father how nasty cigarettes were. My mother would then have my sister and I wash all the walls in the house. I remember the brown streaks running down the walls and how dirty the water in our buckets would get.”

But all of her parents’ attempts at quitting smoking failed. And the house would soon fill up with smoke again.

Despite the fact that Stephanie’s parents were smokers, they told her she couldn’t smoke until she was 18. But Stephanie smoked her first cigarette when she was 14 at a friend’s house. The friend’s older sister, who smoked, “gave us each a cigarette and we thought we were cool.” After that initial cigarette, smoking became “a weekend social thing to do, hanging out with friends.” But soon the addiction took hold.

“By the time I was 16, I was hooked on cigarettes,” says Stephanie. “My parents would buy their cigarettes by the cartons, and I would steal a pack when I could. When my father took a nap, I would steal one out of his opened pack on the bedroom dresser.”

When she turned 18, Stephanie bought herself a present—a pack of cigarettes.

“After that, I was officially a smoker,” she says. “During the day, I smoked a cigarette every three hours. I smoked a cigarette with my morning coffee, after I ate a meal, with a drink, when I was stressed. And my closest circle of friends were smokers, too. Smoking was just part of my lifestyle.”

The only place Stephanie didn’t smoke was on the job.

“When I started working in offices, I never smoked in front of people. I became a closet smoker,” she says. “And when I smoked out of sight, I made sure that I used breath mints, chewed gum and washed my hands before I went back into the office. It didn’t occur to me that people could probably smell the smoke on my clothes or in my hair. But no one ever said anything, and I kept smoking.”

But Stephanie knew that smoking was a deadly addiction, and she wanted to stop. Now married, her husband was not and had never been a smoker; he urged her to stop smoking. Her parents had divorced, and when her mother got married again, this time to a non-smoker, she managed to finally quit. At 58, her father developed such a severe case of pneumonia that he lost 25 percent capacity in one lung. Since diagnosed with chronic obstructive lung disease (COPD), he now has to regularly use a rescue inhaler, as well as oxygen at night. And he still smokes, albeit down from his two-pack-a-day habit to half a pack a day.

“Every couple of years, I would try to stop smoking,” says Stephanie. “I even called the Florida Quitline one time, got nicotine patches and a counselor. The nicotine patches made me ill, so I stopped them. I’d get down to two to three cigarettes a day and, then I’d start smoking all over again.”

But if Stephanie could take smoking’s negative effects on her own health for granted, she couldn’t when it came to an innocent life.

“In May 2008, when I was 30, I found out I was pregnant,” she says. “And after being so excited at the thought of being a mother, my next thought was that I had to stop smoking. I felt this wave of guilt wash over me. I knew to keep smoking while pregnant would just be so selfish and unfair to my baby.”

Stephanie tried to quit cold turkey and was “overwhelmed by horrendous withdrawal symptoms.” Then she made a bargain with herself; she would have one cigarette in the morning, leave the pack at home and have another one in the evening. Keeping it from her husband, she would go outside and hide by the garbage cans to smoke.

“I did that until I was 16-weeks pregnant, and then one day, it hit me that what I was doing was so wrong,” says Stephanie. “That was it. I quit. And I was so thankful that my son was born healthy.”

And Stephanie thought she had finally kicked the smoking habit. But when her son was 10 weeks old, family members came over to visit and everyone went outside where smoking was allowed on the patio. A few whiffs of the smoke and next thing she knew, Stephanie asked for a cigarette. And, just like that, she was back on the smoking addiction train.

“I switched from lights to ultralight cigarettes and kept it to about a half a pack a day. I never smoked in the house and around my son,” she says. “I would go outside to smoke. I actually would put on a jacket to go outside and smoke. Guess that was my smoking jacket. And then I’d take it off before I came back into the house.” 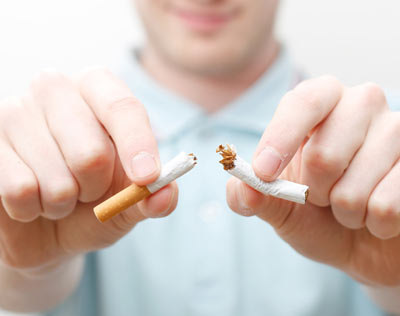 “I quit the day I found out I was pregnant, and I’ve never smoked again,” she says. “It took me six times before I managed to quit for good. I know smoking is an addiction. I know if I ever pick up another cigarette, I’ll start smoking again. Quitting was the hardest thing I ever had to do.”

And while the smoking temptation is still there, Stephanie thinks of her sons.

“My sons are 5 and 10 months now. I don’t want them to see me smoke,” she says. “I want to stay healthy and active for them. I want us to be a happy, healthy family, and that means no smoking.”

*EDITOR’S NOTE: Stephanie Smith is a pseudonym for the woman interviewed for this article.