Colin Barrett and James Newkirk have been on a mission to make Marion County public schools as energy efficient as possible. It’s working—three years and thousands of reminder slips later, they’ve saved the district $3.5 million. And with energy prices rising every month, there’s no telling how much more they’ll save.

Turn it off. Better yet, unplug it. In a nutshell, or rather in a kilowatt, that’s the best way to be energy efficient. The sage advice comes from Colin Barrett and James Newkirk, officially known as energy education specialists with the Marion County Public School District. Unofficially, let’s just call them the Energy Police.

If it has to do with public school utilities—electricity, water, sewer, and natural gas—Barrett and Newkirk play good cop/bad cop. As part of the school district’s Energy Management Department, the duo can zero in on any of the county’s 50 school sites via a computer system. With a few key strokes, they can see the numbers, charts, and graphs of energy usage for any school. They monitor utility bills with an eye out for any unusual spikes in energy use.

There’s no hiding from the Energy Police.

If Ms. Jones isn’t turning off the lights and computers in her fifth-grade class, she may find a note on her desk encouraging her to do so. On the other hand, if she is, then she’ll find a thumbs-up sticker thanking her for doing so.

“Through our Energy Management System, the school district’s climate control system is on a computerized timer—on at 6am and off at 4pm,” explains Barrett. “Now, if there is an extended-day or after-school program, then we are made aware of that and arrangements are made. But it’s up to the teachers to turn off lights and computers in their classrooms.” 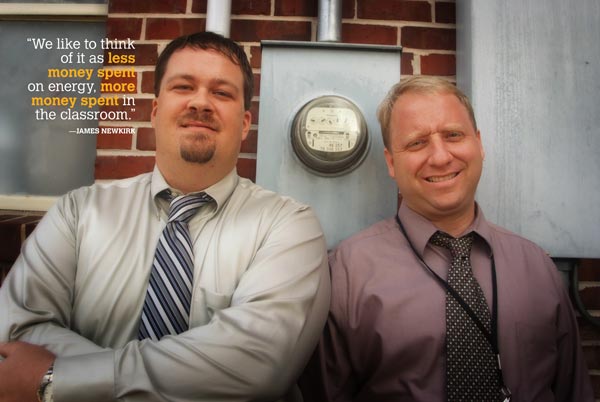 Colin Barrett (left) and James Newkirk keep the Marion County school district on its toes through the Energy Management Department.

To which Newkirk adds, “It may seem like such a little thing to turn off the lights and computers. But you multiply that by hundreds of classrooms and it adds up. We like to think of it as less money spent on energy, more money spent in the classroom.”

Barrett and Newkirk aren’t just energy nerds, but former teachers as well. And according to Jim Yancey, superintendent of Marion County Public Schools, it’s also why they were chosen for their positions.

“When we decided to start the Energy Education Program, we wanted to put people in the positions who understood how teachers think, how a classroom functions, and how a school operates,” says Yancey. “Who best but someone who had been a teacher to fill that role? We’ve been very happy with the results so far and think it’s a very positive program. It’s something everyone in the public schools systems is involved in and can be proud of. ”

And even Yancey doesn’t get a pass when it comes to being energy-wise. 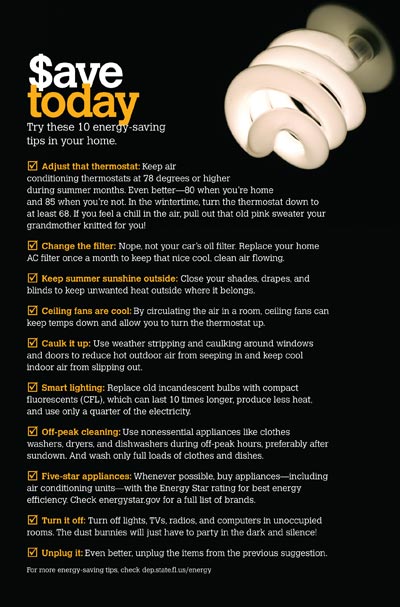 “I have to adhere to the program, too,” says Yancey. “When I leave my office for an extended time, I shut off my computer and lights, and adjust my thermostat. Once you get in the habit, it’s easy to do.”

In their previous lives, Barrett and Newkirk were science and English teachers, respectively, at Lake Weir Middle School. Already energy-conscious, the two even used to carpool from their Ocala homes to class. When Barrett heard of the fledgling energy education program, he immediately told his carpooling buddy.

“One of my strengths is my ability to communicate with a wide variety of people,” says Barrett. “That’s a big part of what we do in this program. We work with principals, teachers, custodians, anyone who uses energy in the school system.”

Newkirk agrees, saying, “People want to do the right thing. They just need to know what that is. That’s where we come in.”

After receiving extensive training from Energy Education Inc., a Dallas-based company that develops customized energy-conservation programs for organizations, Barrett and Newkirk earned their energy badges. The Marion County School District’s Energy Education Program began in January 2006. An annual Energy Management Program for the school district is developed by Barrett and Newkirk. Once approved by the Marion County School Board, the program is then put into effect, overseen by the Energy Police.

“We divide up the schools and do our checks mostly during the night and on weekends,” says Newkirk. “Summer and holiday breaks, especially Christmas and New Year’s, are busy times for us. A school like West Port High can take six hours to go through.”

While school is out during the summer, the Marion County School District continues to conduct business with a staff of 12-month employees. This past summer, a four-day-a-week, 10-hour-day schedule was implemented with energy conservation in mind. With the energy management program still in place as well, Yancey estimates a utilities savings close to $250,000.

Since the implementation of the Energy Management Program in 2006, an estimated $3.5 million has been saved in utilities costs for the Marion County School District.

Pleased with the EMP results thus far, Barrett and Newkirk also know their work is ongoing. 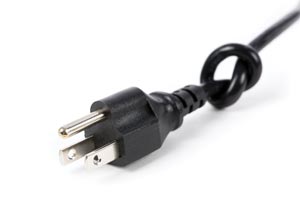 “We stay informed about new energy conservation methods and tools,” says Barrett. “Light-motion sensors have been installed in school bathrooms, and as new schools are built, they are being constructed to be as energy-efficient as possible.”

As well as keeping abreast of energy innovations, the duo also has to contend with rising energy costs.

“It’s a balancing act,” says Newkirk. “We have to be dedicated and vigilant.”

Or as Yancey so succinctly says, “Who would think that doing something as simple as turning off the lights could save millions of dollars?”