The cooking showdown Culinary Combat will be hosted by the Hilton Ocala, where chefs will don their jacket and apron like gladiator gear as they struggle to complete a three-course meal, consisting of an appetizer, entrée and dessert, in one hour. For each dish, the chefs must incorporate a secret ingredient that won’t be revealed until match day. Net proceeds from the event will benefit the Shriners Hospitals for Children.

Two-time Culinary Combat winner Rick Alabaugh will defend his title against challengers James Schumann and Chuck Hurley. These North Central Florida chefs are the cream of the crop, but only one can be this year’s champion.

We rounded up Florida’s finest for a quick Q&A to learn about their plan of attack and played a little word game to get their creative juices flowing.

In 1980, you earned an associate degree in criminal justice at the University of West Virginia. What made you become a chef?
I took a wrong turn probably. I don’t know (laughs). I grew up in West Virginia and worked in the kitchens at The Greenbrier during the summer. I wanted to be a trial lawyer, but you find you have other passions in the world. Working at The Greenbrier was an eye-opening experience.

What were the previous years’ secret ingredients?
The first year was challenging. The secret ingredient was wild boar. For dessert, I had to step back and say, “I’m not a chef anymore. I have to be some kind of scientist and break down the molecules.” The second year was red grouper. It’s hard to use a protein like that. Everyone wants to think so hard, but food is simple. We do a lot of intricate dishes, but at the end of the day, it’s still food.

Do you think good things come in threes?
I guess. I’m very confident in my food. It’s got to taste phenomenal. I could make food look like a million dollars, but it’s all about taste.

Tell us about your sous chef Guirellmo Lopez.
He was my partner for the last two combats. He has been with me since I worked in Birmingham (14 years). I’ve trained him from the ground up. I can’t say enough about him. He can make grown men cry.

Message to challengers:
Have fun doing what you love. Go into it thinking that way. Cook from your heart. If you do that, it all comes together.

It’s time for a round of our favorite word game. We say a word and then you say the first thing that comes to your mind. Go!

OS: Egg. RA: Sunny side up. 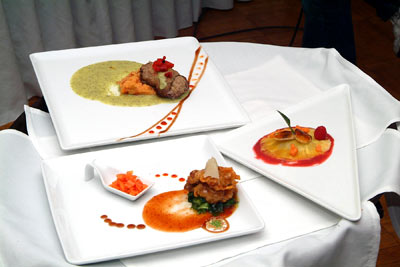 Tell us about your cooking background.
I was interested in cooking since I was 16. I studied at the Culinary Institute of America in Hyde Park, New York, in 1988. I’ve been working for Cuvée for almost two years now.

What is your strategy for the competition?
Fall back on familiar items and techniques, such as classic French style methods of cooking, keeping with sauces. I can dig deep on any product that comes across the table. I’ve cooked with anything you can name.

Why do you think you would win?
As an executive chef, I’ve always been hands-on. I’m also on the same page with my sous chef. We think very much alike.

Tell us about your sous chef Jeremy Zajack.
He’s an excellent chef with a lot of skills, extremely fast.

Biggest challenge of the challenge?
Kind of being the new kid on the block.

Tell us about your start.
I’ve been in the culinary field for 19 years and had non-institutionalized training. I didn’t want to get a “real job” and found cooking to be natural. I started out up north and then left everything in New York except for my car and my knives.

Why do you think you’ll win?
I’m just incredibly versatile. Give me a pack of instant coffee, shoelaces and a tin can and I’ll make you the best hobo stew you ever had.

What is your worse kitchen injury?
I ripped fat out of my hand. I was cutting a piece of 18-month old Parmesan that was 120 pounds. At the hospital, I videotaped being treated.

How do you spend your time outside the kitchen?
I fish as much as I can. It’s more of a hobby. I catch and release when I fish in freshwater. In salt, I eat everything.

Do you have a strategy for the combat?
I’ve been talking to a lot of people. Everybody is wishing me luck, but as far as strategy, right now I’m still working on that.

OS: Rick. CH: Is that the dude’s name?