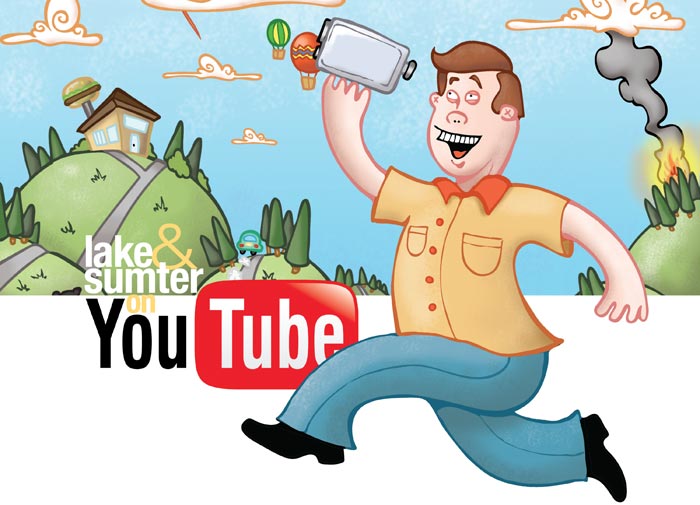 What do a rap video, a tornado touchdown, a bear crossing, and a moldy alligator all have in common? Time’s up. They’re each Lake- and Sumter-based videos posted on YouTube for the whole world to see. Check out these 20 local favorites from one of the Internet’s biggest cultural phenomena. It might just be the wackiest hour—or two or three—you spend online this week. 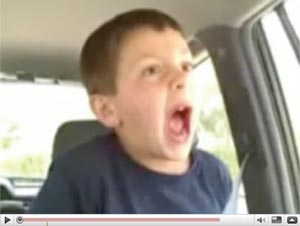 ‘David After Dentist After Remix’
Posted By: tobuscus • Time: 1:16

The YouTube clip “David After Dentist,” a video of a 7-year-old all hopped up on novacaine after a dental visit, has become this year’s “Don’t taze me, bro” cultural phenomenon. And to think it all started when Sorrento’s David DeVore got out his camcorder to ease his son’s anxiety. The Internet sensation received more than 10 million views in a little over a week and has spawned a series of parodies, including a very funny one called “Chad After Dentist,” which deals with Chad Vader (Darth’s brother) after a visit to the dentist. The best one, though, is this “remixed” version of the original, set to a techno beat. I can’t wait till he gets his first filling.

‘Drop Kick Me Jesus Through The Goal Post Of Life’
Posted By: Gomerlump • Time: 2:47

This clip of the Bobby Bare country classic — or travesty, depending on your point of view — features Blackwater Creek performing at the Haines Creek First Baptist Church Summer Festival in Leesburg. This bluegrass-inspired version has zero production value — no close-ups or editing — just a song so terrible you have to hear it to believe it. “End over end, neither left nor to right, straight through the heart of them righteous uprights,” the song goes, finishing with, “All the departed dear loved ones of mine, stick them up front in the offensive line.” Kinda makes me yearn for the poetry of a Vanilla Ice B-side. 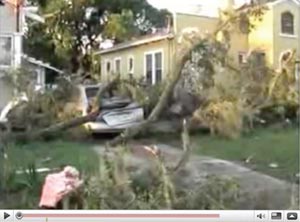 Short interview footage from the devastating tornadoes from two years ago. This professionally edited clip from the award-winning newspaper has excellent production value and quality interviews. Most importantly, though, it reminds us all to appreciate what we have.

Who needs American Idol? Two years ago, British pop star Lily Allen jump-started her own career by posting her covers of well-known pop tunes on YouTube. When she started getting millions of viewings, the record labels took notice. Locally, check out this touching Rascal Flatts tribute from a young bride to her husband in Iraq. She’s a cute girl with a nice voice who keeps the clip short and sweet, something other YouTube’ers should emulate more often. Could she be the next Kelly Clarkson? You decide. 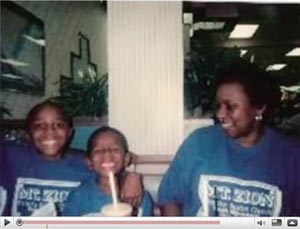 This touching video tribute is just in time for Mother’s Day. Yes, the production value is low with the audio being especially low-quality, but the simple slideshow of images somehow makes up for the technical shortcomings. The whole “I love you, Momma” refrain is especially touching. Don’t agree? Go visit Whoville to find your heart.

Another tornado video, this time a blend of moving and still images from the devastation in Lake County. Using “Praise You In This Storm” by Casting Crowns as a soundtrack, this clip is simple but effective, and emphasizes the religious overtones of the tragedy. By the time the lyric, “And though my heart is torn, I will praise You in this storm” plays, you’ll be a believer, too. Powerful. 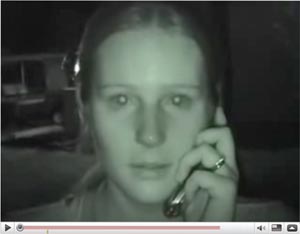 ‘Hurricane Charley At The Daily Commercial’
Posted By: mykolm • Time: 8:44

More storm footage, this time how the Leesburg daily handled the onset of Hurricane Charley. Admittedly a little long at over eight minutes, this clip really shows the difficulties the paper had to overcome in getting to print on time. You remember that storm, right? We just had to deal with the rain and winds — they had to do their jobs, too. Although I’m an admitted newspaper junkie, this should appeal to storm chasers and local newshounds as well. 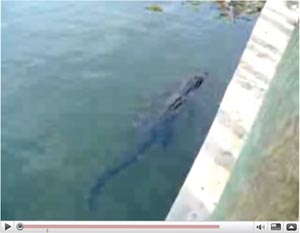 Chevy Chase and Beverly D’Angelo are nowhere in sight, although their careers are probably low enough for a Family Vacation direct-to-DVD sequel set in Lake County. No, this clip features an unnamed family on vacation in Central Florida at Lake Sumter Landing in The Villages. The best part? When the mother says, “Kinda moldy looking, isn’t he?” John Hughes couldn’t write gold like this. Call Hollywood now. 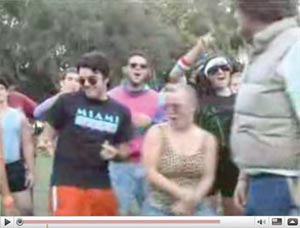 A short highlight of some of the best parts of the Warren W. Willis United Methodist Summer Camp in nearby Fruitland Park. While not nearly as exciting as Meatballs, this clip shows kids doing what kids do best — working together, having fun, and acting goofy — especially the best part, the first two minutes. 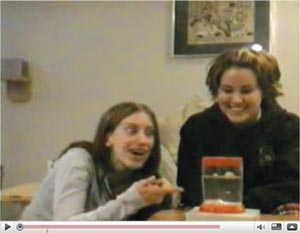 Parody videos are to YouTube what getting-hit-in-the-crotch videos are to America’s Funniest Home Videos, so this one is admittedly not exactly unusual. It is, however, very funny. OK, maybe not Saturday Night Live commercial parody funny, but you get the point. This relatively short clip, which is probably about a minute too long, compares sea monkeys to other high-maintenance animals—dogs, cats, and reptiles—and answers the questions on everyone’s mind: “Do you need a friend? Why not a sea monkey?” The best part is the closing, “And, if you act within the next 10 minutes, you get three times the monkeys!” For anyone who read a comic book in the last 20 years and saw the ad for the tiny, exotic creatures on the back page, who can resist an offer like that? 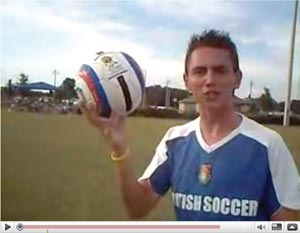 Just one word is needed to describe this too-cool Leesburg submission—GOOOOOAAAALLLLLL! 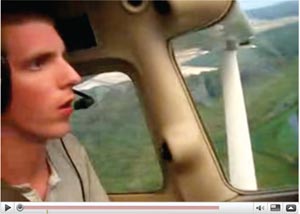 Sometimes you don’t need any video trickery for a compelling YouTube entry. Take “Diversion Into Leesburg,” for example. This clip shows a small plane en route from Cedar Key to Daytona that has to make an unplanned landing in Leesburg due to the weather “not looking good.” The pilot also describes a “squall line from Ocala to Orlando” heading southeast ahead of an approaching cold front. With very little narration and no background music, viewers are given a rare, pilot’s-eye view of the approach and landing. 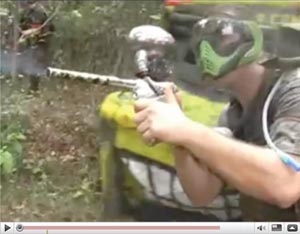 Imagine Oliver Stone’s Platoon with plastic weapons. That’s how serious paintballers take their sport and this is proof. Using jittery hand-held camera work and occasional graphics, this video features lots of hard-to-follow action and serves as a window into another lifestyle. With nearly 60 paintball scenario teams and 11 paintball tanks playing the 24-hour scenario paintball game, this video will provide lots of entertainment in just under six minutes. Flashbacks not included. 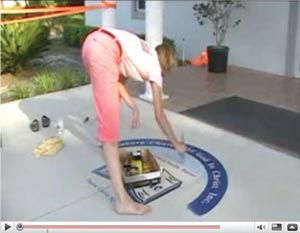 Yes, this one’s a commercial YouTube entry, meaning that she hopes to get business from the Internet audience. Still, it’s very cool to see Kim Hurst’s time-elapsed video of her painting a mural on the entranceway for the Leesburg Church of God in Christ. Set to “Shackles (Praise You)” by gospel group Mary Mary, Kim demonstrates her technique in a quick and efficient manner. If you’re curious for more, she has a total of 14 videos posted on YouTube, including signs for well-known local landmarks like Vic’s Embers, Ramshackle Café, and Gator Harley-Davidson. Her everyday art is worth the time. Now you know. 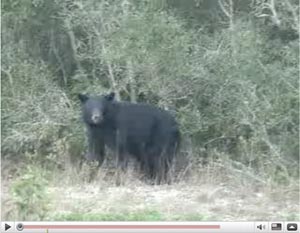 What would you do if you were whizzing down SR40 and saw a Florida Black Bear watching you from the road’s shoulder? Well, the couple in this clip got out the video camera for a fleeting glimpse of this threatened species before he bounded back into the protective enclave of the dense thicket. I don’t think I’ll drive that same stretch of road the same way ever again after seeing this brief reminder that we share our planet with many other amazing creatures—and that their fate is often in our hands. 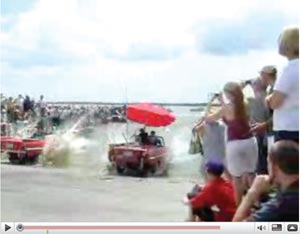 You get to see about a dozen of the wacky autos/boats take to Lake Dora during this big annual event. While the clip features no background music — maybe the theme from Titanic would’ve been appropriate? — this is still a cool glimpse into an avidly pursued culture. Want to see more? Put “amphicar” into the search box and your boat will be floatin’ for hours and hours. 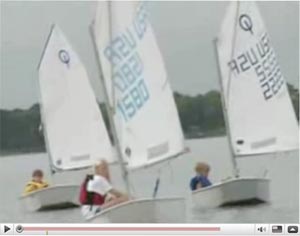 This pastoral video shows many of the best parts of Lake County — the Donnelly House, Christmas in Mount Dora, and the annual boat show. If you haven’t been to these picture-postcard events recently—or ever—this short clip may inspire you to check out your own backyard a little better. The best part comes at the 2:10 mark, with a brisk, driver’s-eye-view of an oak-draped scenic road. 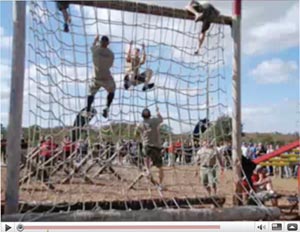 Not quite Battle of the Network Stars with Jamie Farr, Farrah Fawcett, or Richard Hatch. No, this slightly-too-long clip documents the Lake County team at the SWAT Roundup International Obstacle Course on December 5, 2008, in Orlando. Watch the inductees climb a giant log ladder, crawl through what looks like a chain-link fence set six inches off the ground, and scale a larger-than-life net more deftly than Spiderman. With a nice mix of stills and video and some vintage ‘80s metal as a soundtrack, the only thing missing is Howard Cosell’s nasal play-by-play and Fawcett’s signature ‘do. 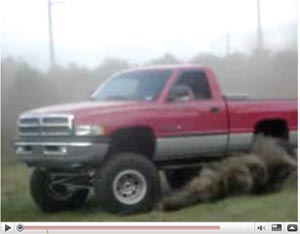 A somewhat pointless, but nonetheless entertaining video of a self-described “bad-ass” Dodge truck owner. The fire-engine-red truck spins in circles like a four-wheeled Tasmanian devil, kicking up dirt and grass into a funnel cloud of debris. Then, 23 seconds later, it’s over. Need more pointless truck action? Check out “Burn Out,” nine seconds of screeching rubber meeting the road. Yee haw! 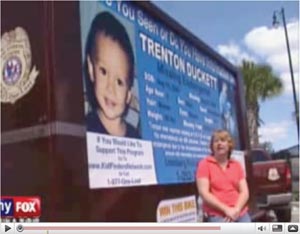 A FOX35 clip that shows an organization that specializes in bringing awareness to missing children cases. The rolling billboard showed missing Lake County toddler Trenton Duckett in an attempt to stir interest and raise more evidence for local officials involved in the case. Yes, it’s a news clip. Yes, it’s not that new anymore. But it was a quirky diversion to a case that’s transfixed anyone who still wonders what happened to that little boy.