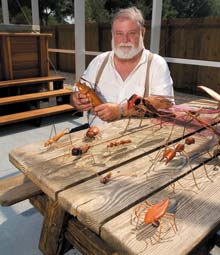 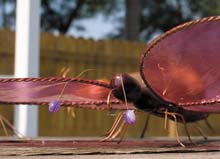 They call him Larry the Cable Guy after the well-known comedian. It’s sort of the first thing that comes to mind when you learn Larry Brown actually works as a broadband technician for Cox Communications in Ocala. But that’s where the similarity ends.

This Larry loves to create insect art from wood and wire, so maybe he should become known as Larry the Bug Guy instead. The hobby started after he was sidelined by a back injury in 1999. With time on his hands, he started whittling, but his first project was born of necessity followed by creativity.

“I needed a cane,” he says. “And I started carving faces on it.”

He’s not sure what finally led him to bugs. It was certainly not a childhood fascination.

So he made one. Then another. And another. He gave them away to friends mostly and that’s when he really got the bug, expanding to mosquitoes, dragonflies, beetles, scorpions, grasshoppers, and butterflies.

The simplicity of his designs, plus a reasonable adherence to the anatomically correctness of his subject matter, gives Larry’s insects a uniqueness. He uses a dremel tool to form the torsos.

“I tried carving them with a knife,” he says, “but I cut myself quite a bit.”

His favorite woods are red cedar, cherry, and pine.  Once carved, he coats them with polyurethane. The appendages that form the wings, legs and antennae are made from wound 12-gauge copper electrical wire.

The largest sculpture Larry has done is a three-foot dragonfly. The smallest individual unit was three, two-inch ants designed to look like they were crawling up a wall.

Larry still carves walking sticks and has added hobbyhorses, turtles, tree swings, candlestick holders, bowls, and other non-insect creations to his collection. His latest project is creating Mr. Potato Head-like facial elements and attaching them to tree stumps. He spends what free time he has, mostly evenings and occasional weekends, working out of a utility shed he’s turned into a shop behind his home in the Ocala National Forest.

“It keeps me out of honey-dos,” he says, chuckling.

Larry says he’s not given much thought to selling his creations at arts and craft shows.

“I get more thrill out of giving them to people,” he says. “I’ve never done it for profit.”

Another more immediate problem is a lack of inventory.

“I’ve given them away so fast,” he explains, “I never developed an accumulation.”

In fact, Larry has sold only two of his sculptures. He is not sure how many bug sculptures he’s made, although he thinks it may number in the hundreds.

“I have eight of his pieces and I‘ve probably given him at least a dump-truck load of wood over the years,” he says. “Mostly red cedar.”

As for Larry, his personal favorites are his ants.

“It’s the quickest and easiest.” he says. “Normally, I see a head in a piece of wood with the knots in the right place for eyes.”

Insects notwithstanding, knots have also played a part in some of Larry’s slightly naughty, almost life-size and miniature replications of the upper human female form. He says he’s given away at least a dozen of those wooden sculptures. Like his comedic namesake, Larry has a slightly warped sense of humor. As a joke he once made a miniature three-legged milking stool for a friend to give to his doctor who had order him to bring in a stool sample.

Although he doesn’t rule out marketing his bugs on the Internet, Larry, at least for the moment, is content just giving them to friends and relatives.

“I like to see the expressions on their faces.”