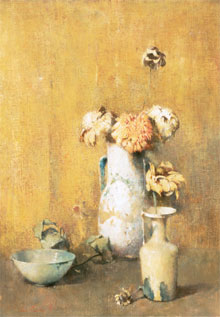 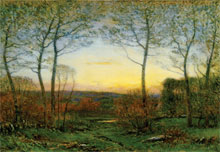 By nature most people are creatures of habit. Our tendency is to resist change and look fondly back to the past even if the past wasn’t what we wanted or liked in its present form. When the world as we know it begins to change, there are those who instinctively rebel.

The American Impressionist painters at the turn of the 20th century felt the tug of change. The industrial era was changing their world. The gentle cadence of horse-drawn carriages pulled on cobblestone drives was being replaced with the sounds of machinery and engines. As the change sparked apprehension among these artists, it also inspired their creativity. The result brought about the American Impressionists works.

A glimpse into the art these emotions and study produced are on exhibit in Ocala as the Appleton Museum of Art presents American Impressions: An Arcadian Vision, Paintings from the Akron Art Museum. This exhibit opened on December 18, 2004 and continues through February 27, 2005.

James Rosengren, Coordinator of Finance and Administration of the Appleton Museum, is excited to have these works in Ocala.

“This is such a significant exhibition,” he states. “It is such an interesting comparison to the mainstay works of our museum. Most of our painting collection features the works of 19th century academic artists where brushstrokes were rendered invisible. The impressionist movement really brought about the technique where each stroke almost jumps off the canvas.”

The core of this collection comes from industrialist Edwin C. Shaw, who amassed more than two hundred works. Shaw, like other members of Ohio’s elite, benefited from a booming U.S. rubber industry that allowed them to assemble beautiful, turn-of-the-century landscapes, portraits, and still lifes.

While industrialist executives embraced cutting-edge technology and urban living, they also sought to uphold America’s cultural history. They collected and in turn donated these paintings to the Akron Art Institute (now Akron Art Museum) when it was founded in 1922. The patrons of the Akron Art Museum understood that the paintings’ lyrical expressions of beauty and refinement would provide pleasure to visitors through the industrial age and beyond.

The American Impressionists didn’t want to paint what they saw happening in their quickly industrializing nation. Instead, they often employed European impressionistic techniques to convey pastoral beauty. They painted tranquil landscapes and dreamy portraits of women, aiming to fulfill the widely held belief that art should delight the senses and elevate the spirit.

Nearly every artist featured in this exhibition traveled to Europe for instruction and inspiration, although their inspiration was often tempered with their criticism. In 1877, artist Julian Alden Weir described an exhibition of French impressionists as “worse than a chamber of horrors.”

Many American artists found the high-keyed colors and forceful brushstrokes of artists such as Monet and Renoir unsettling. Instead, Weir adopted small brushstrokes, subtle hues, and crisp forms in delicate landscapes such as White Oaks. As with any educational experience, these artists gleaned ideas from the European artists and then created their own style.

After initial resistance, many American artists did employ impressionistic techniques. In Bedford Hills, Childe Hassam used diagonal strokes of green, blue, and yellow paint to capture the play of sun and wind over a lush field in upstate New York. Frederick Frieseke’s dazzling Through the Vines depicts dappled sunlight with brilliant flecks of primary color falling across a woman and her parasol drifting leisurely below.

Six artists represented in this exhibition — Weir, Hassam, Willard Metcalf, John Twachtman, William Merritt Chase, and Thomas Wilmer Dewing — exhibited together as part of a group called the Ten American Painters, dedicated to promoting newer styles such as impressionism. These works appealed greatly to urban-based collectors who saw in them evidence of the restorative power of nature.

Other American landscapists sought instead to express mood and subjective feelings through their images and drew inspiration from the Barbizon painters, a group of French artists who lived and worked in a rural community outside of Paris. Simplified compositions, blurred forms, and a limited range of colors characterize their technique, called tonalism.

By merging figures with the landscape, tonalists expressed their belief in humankind’s essential spiritual connection with nature, an idea introduced into nineteenth-century American culture by authors/naturalists Ralph Waldo Emerson and Henry David Thoreau. Tonalist artists were never organized as a formal group, but most who painted in the style knew one another and shared similar points of view.

Nature was not the only source of pleasure and inspiration for the artists in this period. Many found in the female figure an ideal emblem of enlightenment and beauty. Impressionist painter Fredrick Frieseke summered in Giverny, France, where Monet lived, and specialized in depicting figures bathed in sunlight.

William Merritt Chase is best known for his society portraits of women rendered with bravura brushstrokes and deep, rich colors. His courtly Girl in White, a portrait of Florence Irene Dimock (the daughter of a Connecticut-based silk merchant) captures the baroque-era style he was taught when studying at the Royal Academy in Munich, Germany.

Cincinnati native Frank Duveneck also studied in Munich. The meticulous brushstrokes and icy colors in his portrait of his sister, Molly, represents the classical style that developed later in his career.

Paintings by Thomas Wilmer Dewing reveal his distinctive and sophisticated vision of women.

“These artists somewhat rebelled against the confinement of the Academy and brought this new form of art to America,” Rosengren concludes. “The paintings are just scrumptious. I can’t wait for everyone to see them.”

The Appleton Museum of Art