The kids are out of school, and family fun is on everyone’s agenda.

Take advantage of the downtime to enjoy one—or five—of our area’s many December-themed events. 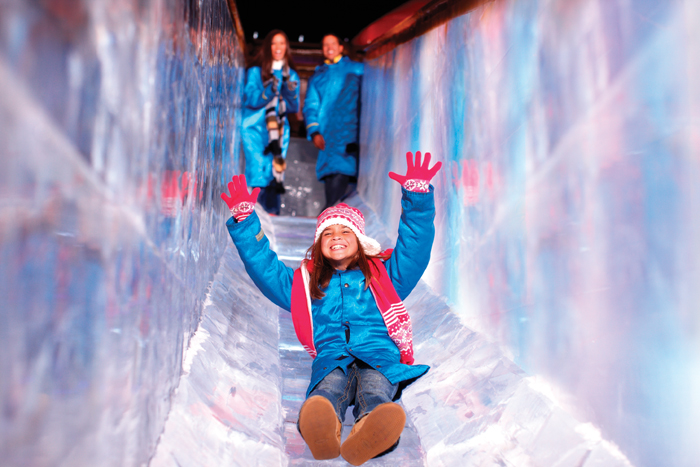 Mickey leads the celebration with this fun, winter party, featuring a traditional mix of live entertainment (including Anna and Elsa from Frozen), fireworks and a special parade. Also at the Magic Kingdom are the live shows Here Comes Mickey and Santa and Mickey’s Most Merriest Celebration.

Holidays Around the World

Celebrate the month as Epcot always does, with traditions spanning the globe. Highlights include the International Yuletide Extravaganza (featuring traditions from the 11 World Showcase nations), Candlelight Processional (the story of the season told through celebrity narration, a choir and 50-piece orchestra), and IllumiNations, a special fireworks display.

Kirby’s is celebrating its fifth year running its Christmas Express train, the most popular holiday train in Florida for the past two years (so reserve your tickets early). The 20-minute ride takes visitors throughout the illuminated Kirby Farm, powered by an authentic, historic locomotive. (There are just three of its kind still active.) There’s also an imported Italian carousel for family rides, live entertainment, and a live show provided by Dance by Shelia. The farm also boasts craft and gift vendors as well as delicious food.

Visitors can enjoy both the Dickens Villages and many of the Urban family’s themed trees scattered throughout. Additional community decorated trees will be displayed on the second floor. The Appleton’s “Family Day” takes place on December 3, when admission is free and families can enjoy making art, photo opportunities and hopping on carriage rides.

With music and comedy at center stage, this show should please even the Grinchiest member of the family. Set in Whoville’s whimsical wonderland, the expansive production is a live retelling of the classic television special.

Want the excitement of downtown skating without all that messy snow and frostbite? Ocala offers an outdoor, synthetic ice rink for skating. Check in at ocalafl.org to keep up to date with all of this year’s theme nights.

Jam on! Rock and roll along with some squealing electric guitar, seriously heavy bass and eye-popping visuals, as these best-selling performers make their traditional return to Florida.

Here’s a fun take on history: a survey of the past 100 years of toys, tracing the development of board games, dolls and other go-to Americana toys. Toytopia boasts life-size toys and the world’s largest Etch-A-Sketch standing at 8 feet tall. Guests can also step into a larger-than-life dollhouse, which stands 20 feet and two stories tall—big enough to walk inside and play! There are toys to build with (LEGO, Lincoln Logs, K’nex), as well as a Retro Arcade featuring Donkey Kong and Missile Command. And before you leave, play a tune on the floor keyboard just like in that memorable movie scene from Big.

Cookies for Santa is a super fun toddler (ages 2-4) baking class starting at 6pm and limited to just 20 students. While cookies bake, families watch A Christmas Story and enjoy some “warm” chocolate (for young mouths). Rumor has it that Frosty the Snowman will be on hand to supervise! In case you miss this event, Toddler Time is hosting a similar class with gingerbread houses and Twas the Night Before Christmas on December 21.

Movie On The Lawn: The Polar Express

Only in Florida can you enjoy an outdoor movie during December. Snuggle under a warm blanket, roast a marshmallow by the fire and then kick back with a classic movie on an outdoor screen.

The Sharon, The Villages

Enjoying the beauty of the season calls for a stirring concert not once but twice with a matinee and evening show. Attendees are sure to be moved by the beauty of this renowned orchestra’s work.

The Sharon, The Villages

Nebraska Theatre Caravan is staging this Charles Jones adaptation of A Christmas Carol, rich with ensemble music and exquisitely staged with Broadway-style scenery and costumes. Listen for classic tunes like “God Rest Ye Merry Gentlemen,” “Away in a Manger,” “Greensleeves” and more.

Whether you can’t take the chill of an outdoor activity or just want to kick back with a tub of popcorn and laugh with the family, here’s the skinny on the top movies this season.

•Fantastic Beasts and Where to Find Them: OK, it’s not exactly a Harry Potter movie, but this J.K. Rowling work is a sort of prequel to the series.

•Rogue One—A Star Wars Story: A spin-off from Star Wars: The Force Awakens, the film follows a group of rebels trying to steal the plans for the Death Star.

•Sing:Called the family/animated/musical comedy version of Birdman, the film takes you backstage at a theater run by a koala and a black sheep.

•Trolls: A musical comedy about Troll dolls? Yep. Justin Timberlake and Anna Kendrick explore what life is like outside of the troll community.
Posted in Ocala Style Features