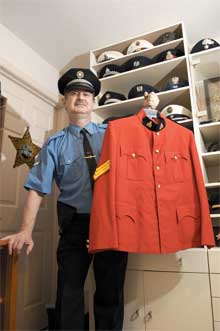 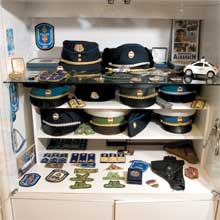 Eugene Fodor’s interest in law enforcement collectibles began in 1996 with a trip to Hungary, his parent’s home country.

“I was given Hungary police patches to take back to the United States,” Eugene recalls. “I gave them U.S. patches as a trade.”

And so began an 11-year trading career that has resulted in thousands of patches and badges from police departments from all over the world.

“As I trade items back and forth, it’s like I have a group of pen pals,” Eugene says. “It’s nice to correspond with someone who was in the same field in a different country. Everyone’s experiences are so different.”

Eugene and many of his pen pals belong to the International Police Association, an organization founded in the early 1960s in England to promote friendship among world police officers.

Eugene concentrates his collection on foreign items because he says they are so different from what the United States forces have to offer. He has plans to collect U.S. memorabilia later.

“The items from other countries are true works of art,” Eugene says. “Each item shows a different coat of arms, is colorful, tells a story of that country or city.”

Eugene’s goal is to collect a patch, hat, and badge from every country in the world. And he’s well on his way to achieving this goal. Keep in mind that although he could purchase these items from sellers, Eugene instead favors trading for his items.

“I could tell you who gave me each piece in my collection,” Eugene says. “I keep a copy of all the letters and correspondence. It makes each piece more special. Because I prefer to trade, I realize reaching my ultimate goal will be a difficult one.

“Many of the countries don’t have the technology to allow me to get in touch with fellow collectors,” he continues. “I used to use the regular mail for correspondence, but today I mostly use e-mail, which some countries don’t have. And many small countries change rulers quickly; therefore, the items aren’t in existence very long. I’m working on it, though.”

So far he has items from Canada, Brazil, Hong Kong, Africa, Spain, Norway, and Italy, just to name a few.

His most prized possessions come from Hungary.

“It’s a collector’s dream to have some of the Hungarian pieces,” Eugene says. “Many of the patches and badges are numbered, making them very original and very collectible.”

Some of Eugene’s items date back as far as the 1800s, including Jerez, Spain’s first-issued police badge. His collection includes every badge Jerez, Spain has issued since, as well. Eugene describes them as “museum-quality” pieces. According to Eugene’s estimates, his collection is worth more than $50,000. He doesn’t keep the pieces for their monetary value, though; he keeps them because each one represents a piece of history.

Some of Eugene’s more unique items include a 1940s era hat from Mussolini’s reign in Italy. He traded a U.S. sheriff’s star to a museum curator/owner in Slovenia to get it. Also in Eugene’s possession is a Carabinierin, or an officer’s parade hat from Italy’s oldest police force.

“The helmet is from when the Nazi’s were no longer ruling Germany,” he says. “It’s a post-World World II helmet and comes from the berlin Police Force when the force was re-established. There’s a lot of history in this hat.”

Like any avid collector, Eugene finds it hard to narrow down his list of favorite items. Since the early days of collecting, Eugene always wanted a Bobby helmet from England. Today he has several, including the first he received.

As compensation for his transactions, Eugene often trades memorabilia from the Marion County Sheriff’s Office. With permission, he purchased several hundred shoulder patches for the sole purpose of trading. Just as Eugene enjoys collecting pieces from foreign countries, officers from other regions particularly enjoy U.S. memorabilia.

One of his trading partners, a gentleman from Canada, has sent Eugene a Royal Canadian Mounted Police tunic, one piece at a time.

“It’s certainly one of my more unique items,” Eugene says of the bright red uniform.

Eugene’s collection has become so massive that it has taken over a spare bedroom in his Ocala home. Each item is neatly displayed and many are labeled. Eugene admits with a smile that he could spend hours talking about his collection and where all of the pieces come from.

“This hobby really does help you create a worldwide friendship with other police officers,” Eugene says. “Politics don’t matter. The cops from each country respect one another and just want to trade items with as many other officers as they can.”

Eugene Fodor has been collecting police memorabilia from around the world for more than a decade. Many of his items are rare and historical.

Eugene can be reached at sgtrodofe@cox.net