Here’s the script for welcoming the Ocala Civic Theatre’s (OCT) new artistic director. Cue the backstage crew. Dim and then raise the lights to signal the audience. Curtain up and spotlight on Katrina Ploof. 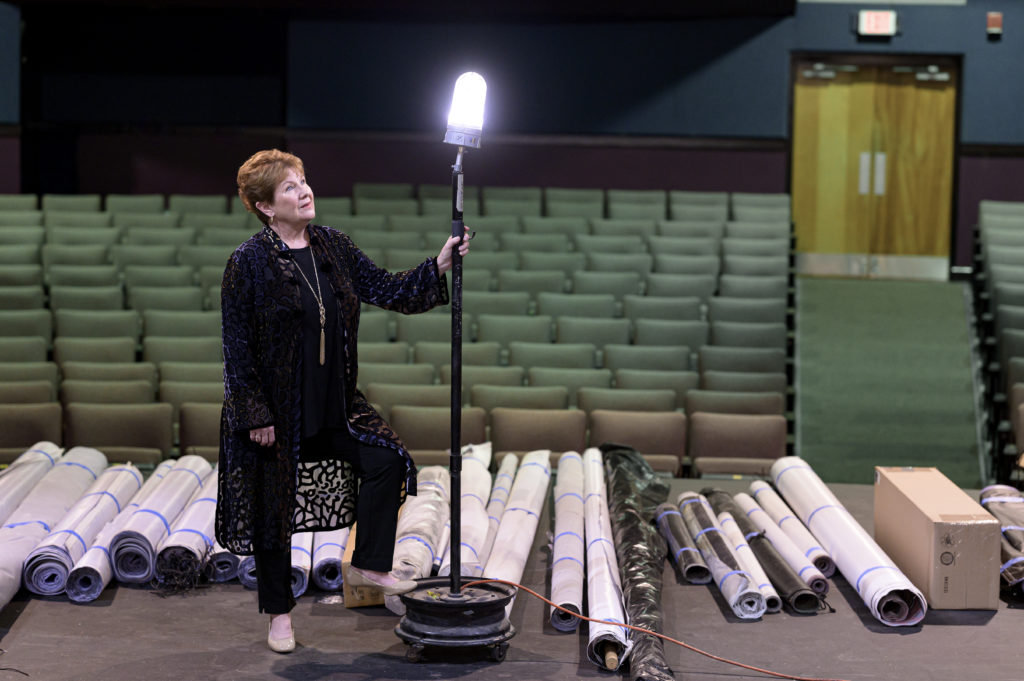 Ploof, a native of Maine, is the daughter of a music teacher and a vocalist, so it’s no wonder she gravitated to the theater. She has performed on stages across America and Canada, and has directed and choreographed more than 200 productions thus far.

In the last quarter of 2019, following the death of the theater’s longtime executive director, Mary Britt, the board of directors brought Ploof on as interim executive director and then reorganized leadership roles and named her artistic director.

“We at OCT are very pleased to welcome Katrina as the permanent artistic director. Before Mary passed away, she suggested we contact Katrina to help us transition,” says George Kirkland, president of the board. “She began helping us in late spring. It was obvious to us all immediately why Mary had suggested her. Her background, skill set and enthusiasm were felt the first day.”

“After evaluating how we would organize for the future, we made an offer and were pleased that Katrina accepted the position,” Kirkland adds. “Katrina’s enthusiasm has already encouraged the very talented and hardworking staff at OCT as we complete the 2019/2020 season. The soon-to-be announced schedule for 2020/2021 will demonstrate her skills and creativity to all theater lovers in North Central Florida.”

The current season continues through June with productions of Always…Patsy Cline, Father of the Bride, To Kill a Mockingbird and Brigadoon, giving Ploof plenty of opportunities to showcase her directorial talents, and she also will play an important role in organizing what could be a record shattering special event.

From March 29th through April 2nd, in honor of its 70th year, OCT will attempt to break the Guinness World Record for the longest continuous theatrical performance.

“The time to beat is 78 hours, 45 minutes and 16 seconds,” notes Larry Kiernan, director of marketing and promotions for the theater.

He says the 3 1/2 day undertaking, “79 for 70!,” will be a community event involving hundreds of participants and volunteers.

“It would be a new world record to commemorate the hundreds of shows, thousands of songs and 1 million-plus patrons of the last 70 years at OCT,” he offers, “and launch the beginning of 70 more.”

With so much going at OCT, we wanted to learn more about Ploof and her future plans.

What is your background in theater?

It feels like I’ve always been in a theater somewhere my entire life. I started out as an actress and made my living for over 20 years performing in everything from community theater to national tours. I was a pit-singer (performing off-stage) in New York, worked as a milliner for a ballet company part-time and ended up designing costumes. I’ve been a dancer and a singer in more musicals that I can count. I’ve designed sets and built props and choreographed and directed. I’ve stage managed plays and written and produced plays. I’m happiest now directing, and of course the best version of that is to be an artistic director of a theater, which is not something I’d ever thought I’d be lucky enough to achieve.

The book Audition, published in 1979, has been kind of a bible for theater people. It was written by the great casting director and teacher Michael Shurtleff and there’s a quote in the book that pretty much defines my life: “If you have a choice and could reasonably be happy doing something else, by all means go at once and do something else. Acting or writing or directing in the theatre…is only for the irrecoverably diseased, those who are so smitten with the need that there is no choice.”

So, I’m one of the diseased ones—I have never felt like I could make any other choice. I’ve also been one of the lucky ones, and I try and remind myself of that every single day.

I’ve happily spent 54 years in the dark. It’s the only place I’ve ever wanted to be. This is my last incarnation. This is the kind of place you want to end your career.

How did you arrive at this juncture?

I didn’t have a formal education in theater. I studied psychology in college so, for me, the love of the art form came, as it does for many theater folk, from the teachers and mentors I had.

I worked as a young actress with a very traditional director, Eugene Casassa, who was a fiery Italian, a passionate theater artist. He was a stickler when it came to detail; everything had to be perfect. I got my obsession with specifics and the fine points of a play from him.

Pam Thompson continually gave me new material to read and study, and instilled in me a love of language and story. She taught in my small high school in Maine, but the values she instilled in me about text I’ve taken all over the world to every project I work on. 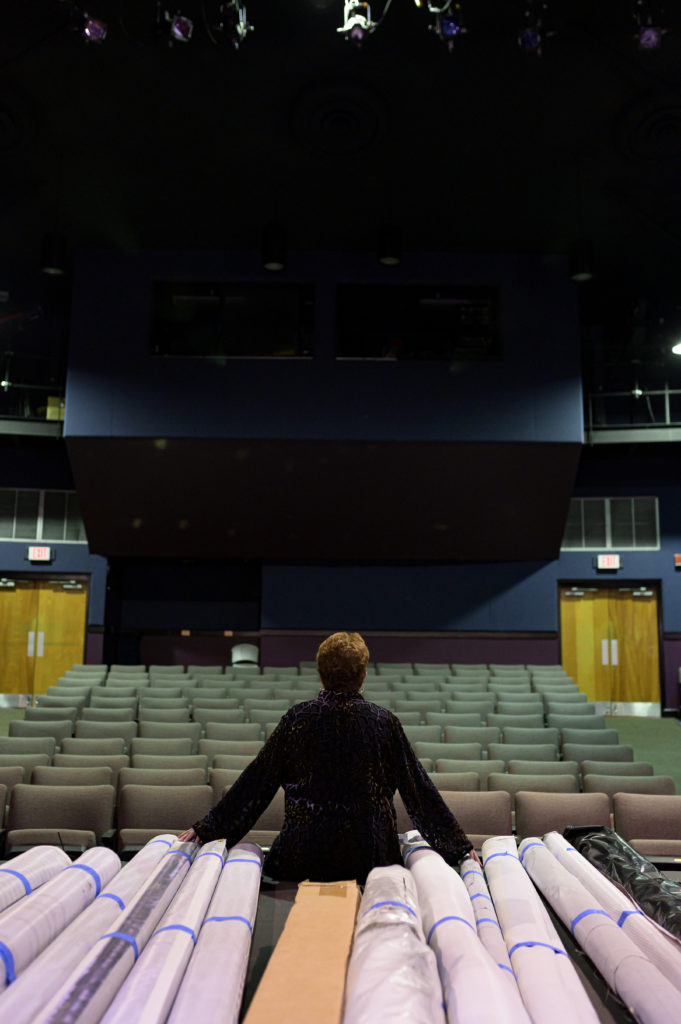 Director Michael Fortner was probably the most important adult mentor I had. He passed away recently, and I’ve spent the last year trying to honor him with the work I do. He was really funny and generous and great with people. I try to emulate that every day now in my new position with OCT.

Norman Small is a producer I’ve worked with for almost three decades. I still ask him for advice when I get stuck. He has produced theater in Florida for 50 years, so he gets it.

And, of course, Mary Britt. Although I met her later in my career, she was the only woman I had ever known who was running a theater by herself. She was instrumental in helping me understand that I wasn’t limited just because I was female, that I was capable and deserving of responsibility and that I had the skills to lead in the art form.

Without these people, and so many more, I don’t know that I’d have had the courage to embark on theater as a life choice. But now I can’t imagine doing anything else.

What is your vision for the future of OCT?

When I dream about the Ocala Civic Theatre I want to see in five years, my dreams always include the beautiful front windows of our building. I love them, because so much of what makes the city of Ocala special can be seen from our windows. The natural world surrounds and shelters our theatre, which as an organization has remained a vital part of Ocala for 70 years. And I love those windows from the outside too, especially when our lobby is filled with children or actors or, most importantly, our audience.

When I dream about a day five years from now when we celebrate 75 years in this community, I always see those windows. I see the doors open wide to a diverse and enlightened audience of all generations. I hear the buzz of conversation at intermission, with our friends and neighbors enjoying the good company of a great story brilliantly told.

I dream about a theater that truly reflects the community it serves and helps lead that community into the future with bold and insightful productions that spark imagination and thought.

I want an audience that is both entertained and challenged, an audience that comes to us to see the world with fresh eyes, to walk in someone else’s shoes, and to leave with a new understanding of both our own community and the larger community of humans we share the planet with.

What are the challenges in producing
community theater?

One challenge is perception. The Little Theatre Movement, which is the DNA of our present community theater tradition, started because over 100 years ago folks decided they’d get together and act out some stories. People performed in their living rooms and churches and schools, and of course there was every level of talent involved. Frankly, some of the shows and the performances, weren’t very good. And so now, a century later, community theater still carries with it this kind of stigma that it’s just your neighbors and friends up there, and you shouldn’t expect too much. 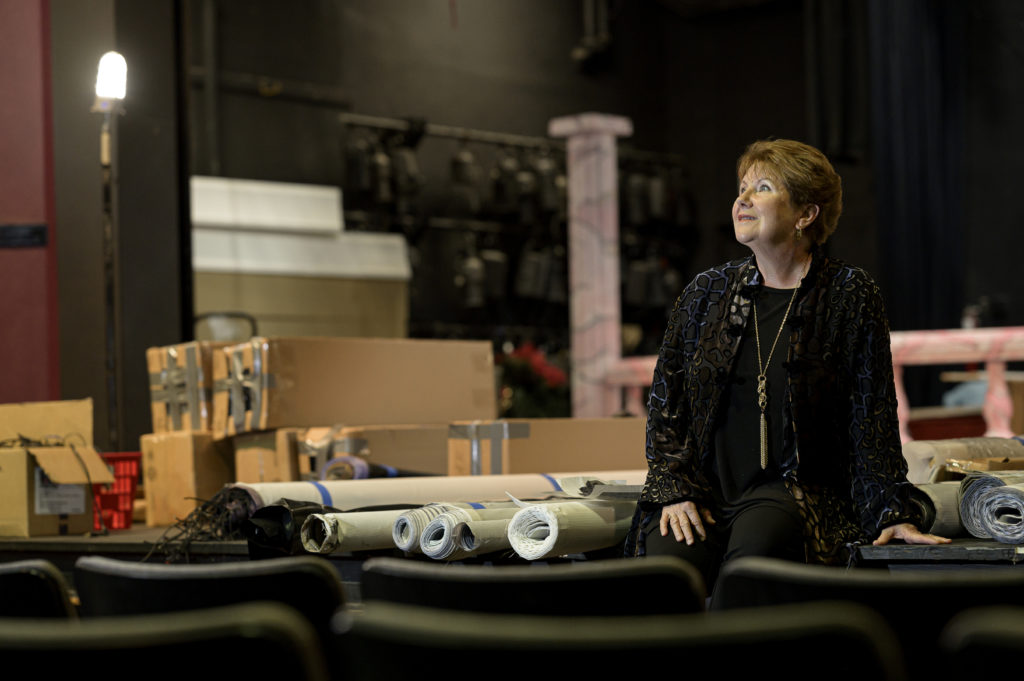 Ocala Civic Theatre is one of the top 10 community theaters in the nation. We have an incredible talent pool in Ocala, and in Florida, and our actors, designers and directors are some of the best in the region and indeed in the country. Our budget is healthy enough that the technical quality of our productions is top drawer. We beat out even the regional equity theater in Gainesville with our production quality. Where else can you go and hear a musical with a full live orchestra and a cast of 30 or 40 people? Making sure the community knows that about us is really important. Word of mouth about the quality of our work is our best marketing strategy.

Another challenge is funding, because we do so much more than just plays on our stage. We have a vital and growing education department. Hundreds of children go in and out of our building in a year. We have a volunteer base of over 500 people. And a 30+ year-old building that constantly needs care and tending. So, money, of course, is always on my mind.

But, honestly, the absolute pleasure and delight of running this theater far outweighs any challenges. I continue to believe we are vital to this community and that at the end of the day, if we do great work, the community will continue to support us.

How can people help?

We will always welcome financial help and any
amount is welcome.

A pair of good dancer tights costs $12 and most dancers in a musical can go through three to four pairs of tights during the run of a show. So, a $100 donation pays for two dancers’ tights for a musical, and that is no small thing.

Many ways to help us are free. You can volunteer for the box office, you can usher, you can paint scenery or work with carpenters in the scene shop. You can sew on buttons or polish shoes. The opportunities to volunteer are really limitless.

Most importantly, you can buy a ticket, come to our shows and talk about us on social media, in your community groups and to your friends and neighbors. You can spread the word about us. That’s the best support the community can give us.