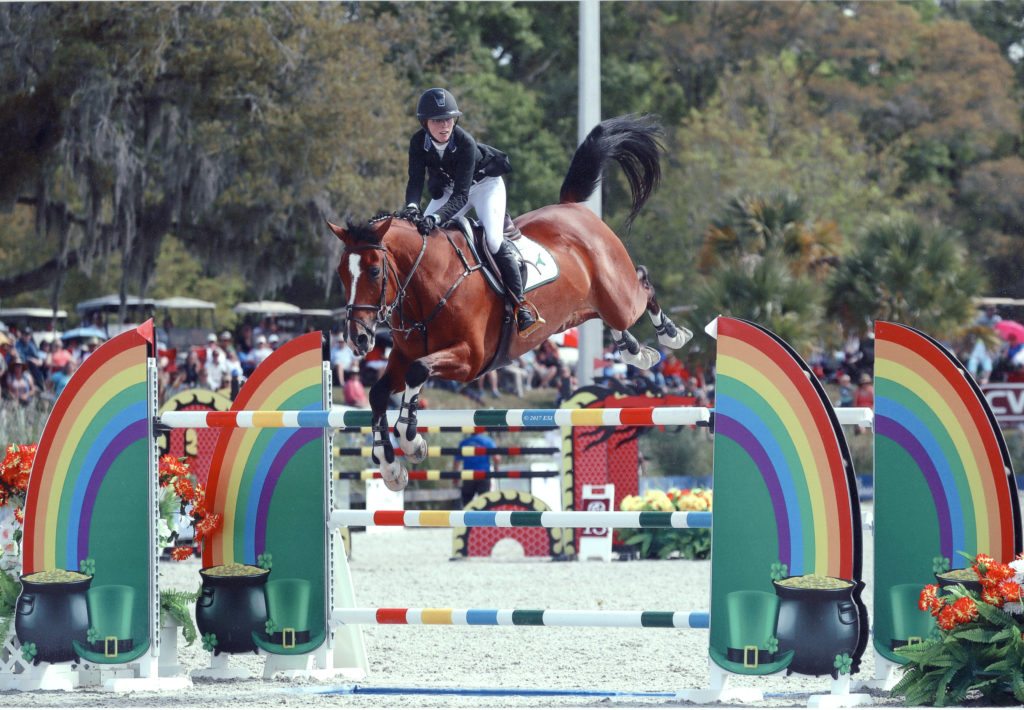 Hayley Waters has been competing at HITS Ocala all of her life—all 21 years of it.

“While I don’t have any memory of it, I showed in my first leadline class at HITS when I was just 1. I do remember later leadline classes and being strapped in pretty good on my pony,” says Hayley, who graduated from Trinity Catholic High School in 2014. “In leadline, you’re led around on horseback by an adult. You’re judged on your seat, leg and hand position while the horse walks and trots. My dad, mom or family friend Lauren Schreiber usually led me around.”

Hayley’s dad and mom are Chuck and Dana Waters, who also showed jumpers competitively.  Dana, who competed at HITS Ocala for more than two decades, was the 1991 National Champion Amateur Owner Jumper. The Waters own and operate Waterworks Farm in Sparr, just northeast of Ocala.

From those early days of being strapped in the saddle, Hayley has gone on to become an accomplished horsewoman. Although her victories in the show ring are too long to list, here are a few significant highlights: 2008 National Champion Green Large Pony Hunter; $250,000 Jr. Amateur Grand Prix at 2015 HITS Saugerties (New York); $50,000 Grand Prix at 2016 HITS Ocala; $25,000 Smart Pak Grand Prix and $25,000 U-Dump Jr./Amateur Prix at 2017 HITS Ocala.

“I ride every day at our farm, usually seven to 11 horses,” says Hayley, who competes as an amateur in jumper classes. “In addition to my parents’ guidance, Daniel Damen has been my trainer since 2012. We plan out the shows, around 25, we’re going to compete in for the year. HITS Ocala is always on my calendar, and it’s great to have it here where we live.”

Hayley currently has a stable of seven horses she rides in shows during the year. She notes that “the best jumpers are consistent and competitive.” Reluctant to pick a favorite, Hayley admits a particular fondness for Qurint, a 14-year-old Swedish warmblood mare.

“Qurint and I have a great bond,” says Hayley. “She’s really fast over the jumps but also a very careful and clean jumper as well. She tries hard every time, and she’s such a good girl.”

Although she is taking online college accounting courses, Hayley has no career plans that don’t include horses.

“I have no plans to become an accountant,” says Hayley with a laugh. “I just thought an accounting education would be good to apply to the horse business. Horses will always be at the center of my life.”