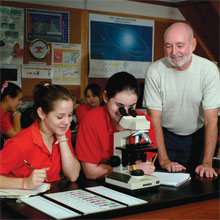 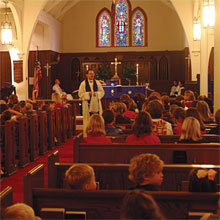 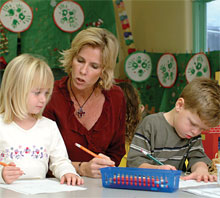 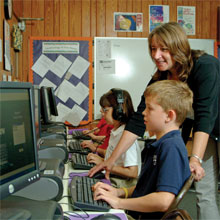 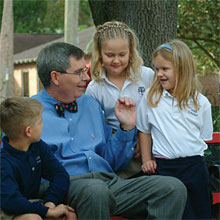 Accredited by the Florida Council of Independent Schools and the Florida Kindergarten Council, Grace Episcopal School offers a well-rounded curriculum for grade levels K3 through eight. With a 47-year legacy and only 230 students, there is an abundance of one-on-one time for teachers and students, something that’s becoming harder and harder to come by in our overcrowded public schools.

“Here at Grace, the most common greeting between a teacher and their students is a hug,” Head of School Edward England says. “The teachers truly care for their students and the students obviously have a great affection for their teachers.”

As head of school, England is very involved with both the faculty and the student body. On most days, you’ll find him greeting students at the gate to begin the school day, and just like the students, England often dons the school uniform.

“I’ll look out the window during lunch and there’s Edward, sitting with all the children,” Administrative Assistant Debbie Bruni says. “The kids love it.”

England is new to Grace this year, but you wouldn’t know it after seeing his interaction with the students and staff.

England has spent his entire adult life working in various school settings, most recently in Georgia as head of Stratford Academy, and he says he’s especially impressed with Grace.

“Our teachers are remarkable,” he says. “I try to spend about two hours a day in the classrooms. We have the most can-do faculty that I’ve ever had the pleasure to work with. The teachers keep their children actively engaged — they talk with their students instead of talking at them.”

The instructors at Grace expose the students to a religious tradition, but one that preserves a family’s religious heritage.

In general, the faculty and parents of Grace set their expectations very high for the children, and the kids continually meet and surpass those expectations. At Grace, they believe involved teachers, parents, and staff are the keys to success.

Consider that each year, students from Grace Episcopal School make a strong showing at the Florida State Science Fair. In fact, three graduates have even been awarded a trip to the International Science Fair. Forty to 50 percent of all Grace seventh graders qualify to participate in the Duke University Talent Identification Program, and since 1998, six of the seven valedictorians in Marion County high schools were earlier graduates of Grace. These are all impressive statistics and are an indicator of the caliber of teachers and students at Grace.

However, even after half a century of academic excellence, the Grace family still celebrates some of the school’s most cherished traditions. Each school day is begun in the courtyard — a place to share birthdays, special news and stories, and group prayer. Courtyard always ends with the Pledge of Allegiance.

“We’re in the process of building our new campus on County Road 475 and we built a replica of our courtyard into the new plan to keep a sense of familiarity for our students.”

Each school year, students participate in a character education program. The “Fruits of the Spirit” program based on Galatians 5:22 encourages patience, goodness, self-control, gentleness, love, joy, peace, kindness, and faithfulness. Children who best exemplify these traits are acknowledged throughout the year.

Grace school also emphasizes nurturing relationships between the elementary and middle school students with “Big Buddies, Little Buddies.” There’s also “Donuts with Dad,” a Mother’s Day tea, various plays and holiday programs, and a complete junior varsity and varsity sports program. The students at Grace are encouraged and expected to be actively involved.

Debbie Bruni also serves as the athletic director and she says there are no team tryouts. If a child shows up and is ready to play, they’ll be put on the team.

“It’s not about winning all the time here at Grace,” Debbie says. “We stress sports in a very different way — it’s about working together and being part of the team. Our students have a good time and are loved no matter what the outcome.”

Former Grace parent Cheryl Fante has nothing but good things to say about the school.

“Our children, Laura and Joey, attended Grace School from K4 through eighth grade,” she says. “They both credit much of their educational successes to the learning experiences they had at Grace.”

“Was it the science projects, the importance of reading and math, or the emphasis on respect for God and others?” Cheryl asks. “Maybe the caring attitude of the faculty and staff is what made the difference. Perhaps it was a combination of all those. Certainly, the friends they made while at Grace School are still their best friends.”