This father and son challenged each other to take their educational endeavors to a higher level. 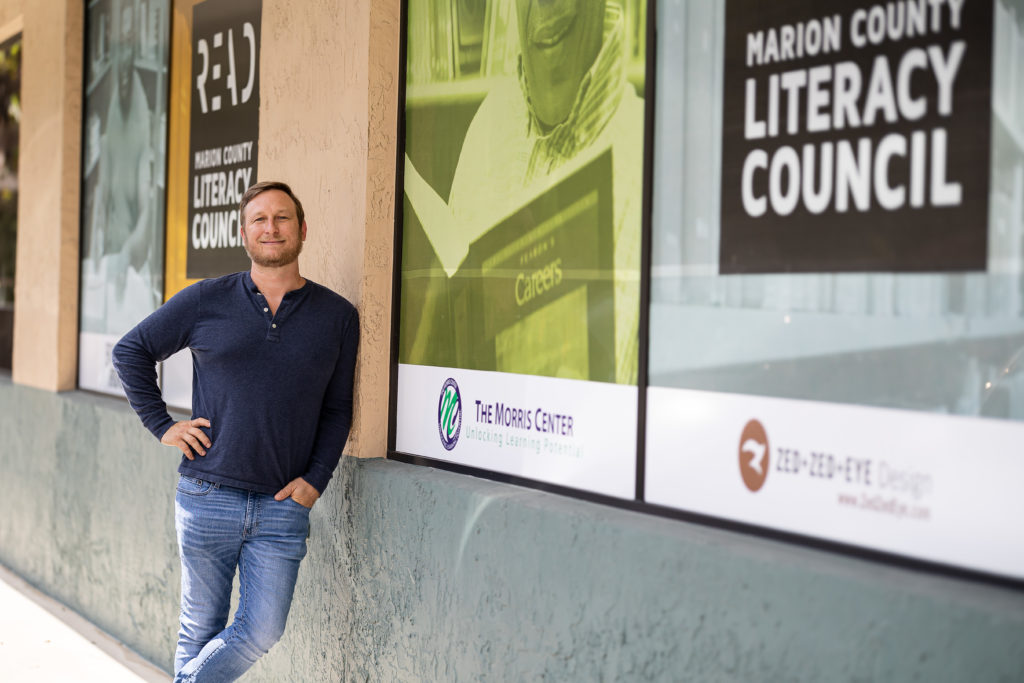 When Adam Volpe was attending Lake Weir High School in the late 1990s, he had no trouble learning when it involved subjects that engaged him.

He loved music: So, he joined band and learned how to play the drums. He loved cooking almost as much: So, he worked at restaurants and trained as a chef.

But the brick-and-mortar, traditional school environment didn’t engage Volpe nearly as much. On the contrary, he felt as if he was drowning in its sea of ever-widening expectations.

At the time, everyone else seemed able to swim towards his or her own brighter horizon with much greater ease—whereas Volpe could only find safety and acceptance on his nearby island of music.

“I struggled with everything else in school,” Volpe, now 40, recalls, “but never music. Music engaged me the most, more so than the school system.”

In school, he felt out of place. But in band, he felt welcomed and appreciated.

“I was always like the section leader,” he recalls. “I had a little bit of responsibility at that age. I had the camaraderie with the drum line and then the rest of the band. It really was its own kind of microcosm inside of the school system that I could escape to.”

Volpe would ultimately choose to drop out of high school and follow his passion for music—wherever it took him.

“I just gave up,” he admits. “I wasn’t getting any enrichment or nourishment anywhere else. And I was doing things outside of school, like playing music and performing and things like that, which was fulfilling. So, I just kind of went on and kept doing that.”

Music—and food—took him first to New York City: the mecca, according to Volpe, of his two biggest passions. While there, he would work in as many high-end kitchens and upscale restaurants as he could. At night, he’d hit the jazz club circuit and soak up the sounds.

“The sun would come back up in the morning and I’d do it all over again,” Volpe says with a laugh. “And, of course, at 18 years old, that’s the time to do that.” 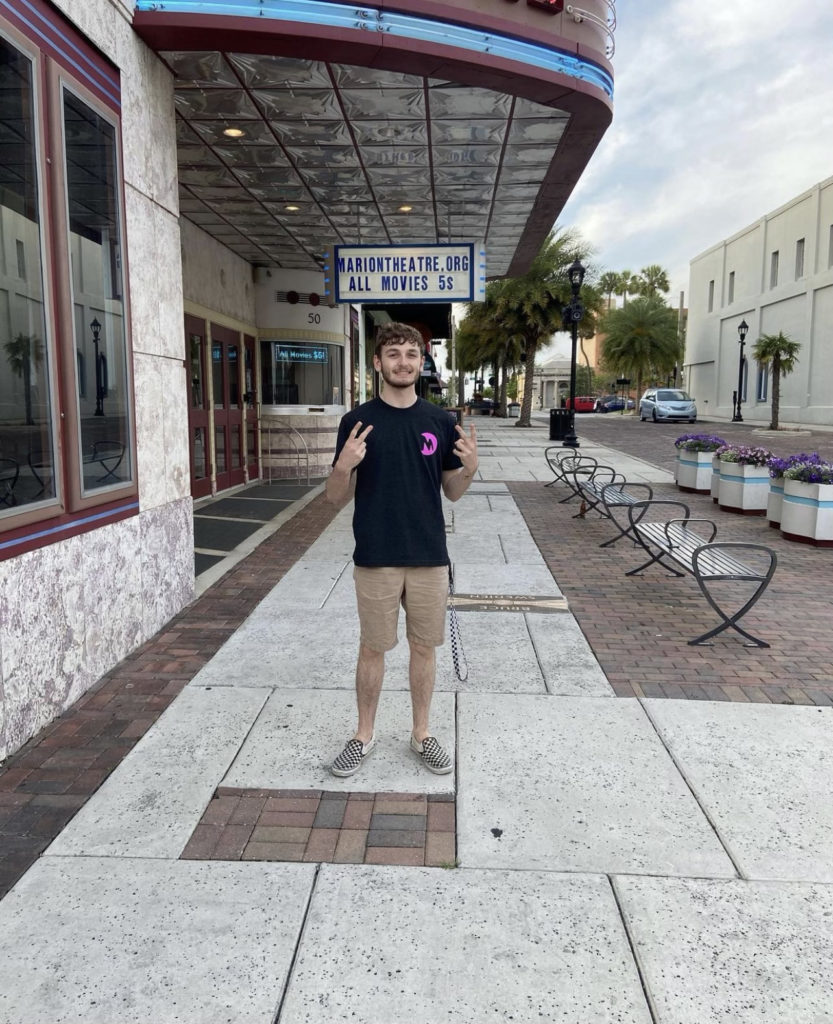 He would live in New York City for a couple years.  After his son, London Stewart, was born in 2001, Volpe moved back to Florida. Following a brief sojourn in Tampa, he returned to Ocala.

Volpe admits to living with his decision to drop out of high school rather well over the next 20 years.

It was a slight weight on his back, he also admits, but nothing too heavy. It never stopped him from living his life the way he wanted to, the way he always had.

“I’d never really ran up to a situation where I needed a diploma or a GED certificate, for whatever reason,” Volpe explains, “but I knew that I should have gotten it.”

Volpe’s lack of a diploma became relevant in his life when his son, then a sophomore at Forest High School, found himself in similar scholastic waters as his dad some 20 years before.

“I saw a lot of repetition in school,” says Stewart about his life in 2019. “A lot of things didn’t really seem to matter to me or weren’t made to feel important in a way that I understood.”

He was barely getting by with low Cs and an even lower GPA. He says he could see no light at the end of his high school tunnel.

“Obviously, I didn’t want to be a dropout,” Stewart shares, “but I wasn’t motivated to do the work and it just didn’t really make sense to me to keep going. It felt useless.”

Then one day, sitting with his dad in the kitchen, Stewart told him everything on his mind and said he didn’t want to go to school anymore.

“I understood how he felt,” he recalls. “But, as a parent, I also felt confusion. Do I put my foot down as a father and say, ‘No, you’re going to graduate?’ But that’s also so hypocritical.”

Before dropping out, Stewart tried Florida Virtual School—splitting school between online and in-class learning—but that didn’t work for him either.

“Then, I don’t remember how I convinced him,” Stewart offers. “But I told him something along the lines of, ‘If you let me drop out, I’ll get my GED before the end of the year.’”

Volpe made a deal: his son could get his GED, but there was going to be a deadline. Also, Volpe would be getting his GED at the same time—and he planned to get his first.

“It was really more a competition between us,” Volpe says with a laugh. “That was just the way I think it had to happen. And I think that me doing it was really…at least, though he wouldn’t admit it…but it was a motivator.”

R.J. Jenkins is one of Volpe’s longtime friends and president of the board of the Marion County Literacy Council. It was Jenkins who helped his friend reach the decision to hit the books once again.

“I basically said, ‘If you are adamant that London gets his GED, maybe you can commit to earning yours as well as a kind of collateral to make sure that he does what he’s supposed to do,” Jenkins remembers.

“And Adam, he hesitated on that a little bit,” he adds, “but, to his credit, he ultimately decided that he would do it.”

“It’s very courageous to admit to not having something like your GED,” Jenkins asserts. “Or any kind of credential, really.”

At the Literacy Council, Jenkins tutored both Volpe and Stewart. To get a GED in Florida, one has to pass tests on four main subjects: math, English, science and social studies. Volpe and Stewart had to score at least 145 points on each test (no fewer than 580 points overall) to earn their GED diploma.

Stewart flew through the course, earning his certificate in roughly two months. He started in September 2019 and graduated in November. Volpe graduated in January of this year.

“I wasn’t too far behind.” he laughs, while suggesting playfully, “There may have been some foul play there. I don’t know if R.J. secretly slowed my process down intentionally for London’s benefit. I don’t know. We’ll never know.”

Stewart, now 20, is currently attending the State College of Florida, Manatee-Sarasota. Becoming a college student is something he genuinely didn’t see himself doing prior to earning his GED diploma.

“Well, I never wanted to go to college,” he admits. “I was always against it, just like, you know, high school was to me. But getting my GED sort of maybe opened up a window for me where there had previously been a locked door.”

Stewart considers it a leap he took and he doesn’t know how it’ll turn it out just yet.

“Who knows how it’ll go?” he offers with a laugh. “Who knows if I’ll ever even graduate? But I like it so far.” 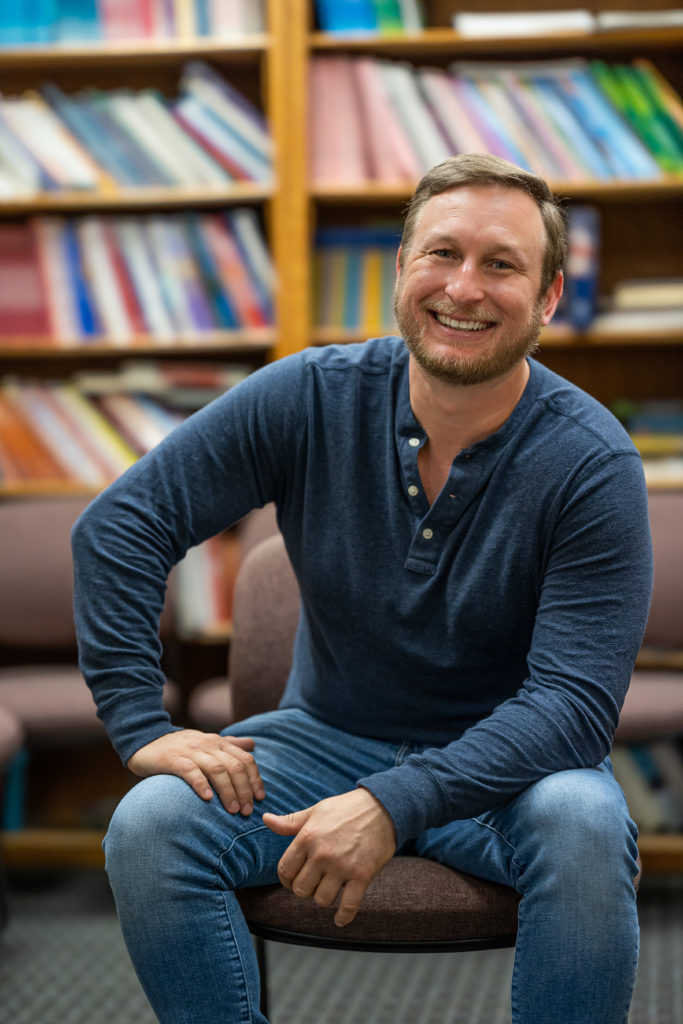 Volpe says he has seen so much growth in his son over the last six months.

“I think he always had it in him. He just needed to find that out in his own way,” Volpe shares. I think getting through this GED process with the Literacy Council showed him that there might be a path forward in the world. And then the process of getting accepted to school again at college…there’s just more and more affirmations.”

These days, Volpe has created for himself in Ocala a world not too dissimilar to the one he created in New York—a world of music and food.

When he isn’t playing in his two bands—The Voltran Collective and a Beatles cover band called The Glass Onion—he is director of operations for the Marion Theatre.

He also has a few businesses of his own. He started Adam Volpe Imagery last year, photographing real estate among other things. He also started a fermented vegetable business called Funky Pickles, which can be purchased at Stella’s Modern Pantry and the Juniper General Store.

“That’s another of my passions,” Volpe confides. “Fermenting vegetables and food preservation in general is something I’ve always really loved and enjoyed.”

Nothing major has changed in Volpe’s life since he earned his GED diploma, he says, but he does feel a palpable sense of relief. He hopes that his and his son’s example will help inspire others.

“It’s never too late to finish what you started, when you’re ready,” he says. “And the non-traditional path is a viable path.”

For information about the many programs of the Marion County Literacy Council, go to marionliteracy.org