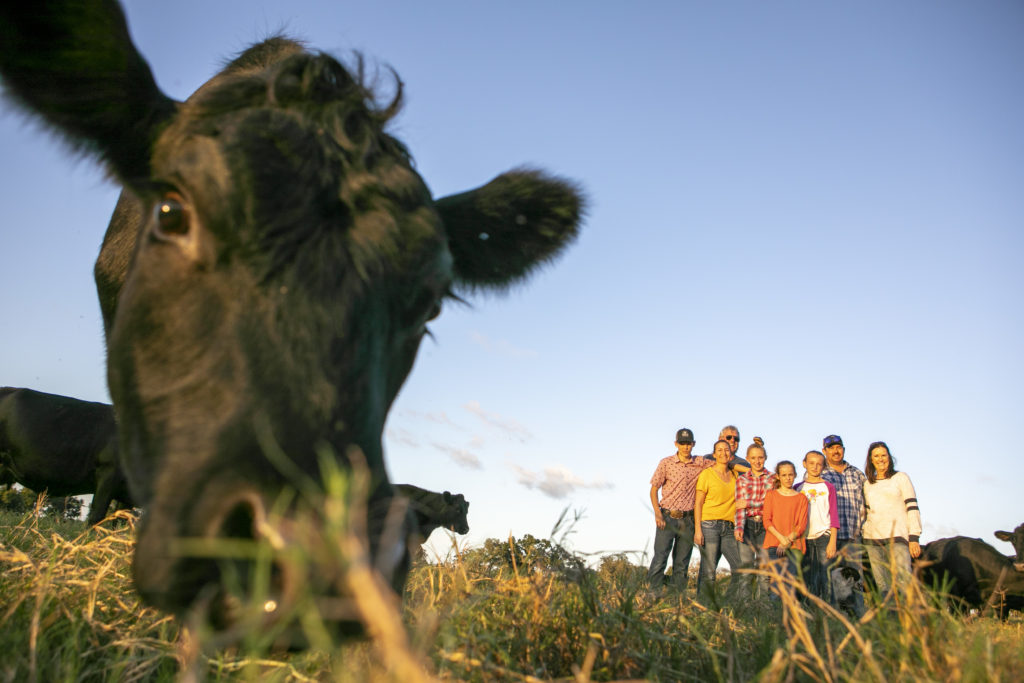 With the help of a childhood rural newspaper route, the late Leroy Baldwin parlayed his love of cows into an internationally recognized brand. Today, several generations of Baldwin’s family carry on his legacy. On a recent afternoon, “Butter Face,” the heifer, herded some members of Leroy’s family for a portrait. From left: Michel Baldwin, Erin Baldwin, Alan Baldwin, Leila Baldwin, Bailey Baldwin, Ellie Damron, Austin Baldwin and Joy Baldwin Papy.

Driving along the narrow, winding, tree-lined country road, replete with numerous blind spots, the fear of being lost is at last allayed by a street sign that bears the name Leroy Baldwin Road. It leads to the 574-acre Baldwin Angus Ranch, located in a nook of northwest Marion County. A well-maintained dirt lane skirts the perimeter of the wide-open pastures, populated by grazing Black Angus cattle, and leads to the equipment barn, where we meet up with the Baldwin siblings.

Growing up on the ranch, daycare for Tony, Alan, Joy and their late brother Mike was riding with their father on the tractor before they could walk. By the time they were 5 years old, kindergarten was helping to feed the cattle and walking behind the hay baler to gather up any wayward hay.

“Our father believed in waste not, want not, and he didn’t want to waste any of that hay,” says Alan, 60, with a grin. “We picked up the loose hay that the baler spit out with our hands and threw it back in.”

“Keep in mind that the hay field was half a mile long and a quarter mile wide,” adds Joy, 59, who is regarded as the organizer of the family. “We were only 5 or 6, but we were expected to buck up and work.”

Tony, 62, chimes in, “We were getting up at daylight to help feed cows as soon as we could walk. I showed my first steer at a livestock show when I was 4. The first thing I learned to drive was a tractor. I was 5.”

“We all showed steers in 4-H and played sports in high school,” Alan recalls. “But we still had to do our chores before and after school and sports activities.”

Indeed, Leroy Baldwin passed on his work ethic to his children. Tony, the unofficial family historian, likes to tell the tale of how his father got his start in the cattle business.

“Our father’s family was not in the cattle business; his father worked construction for the Florida Department of Transportation,” Tony offers. “But for some reason, our father loved cows. When he was 6, he had a rural newspaper route of 17 houses that he walked. He saved up his money and bought a calf, raised it and then re-sold it. Then he’d buy another calf. That’s how he got started.” 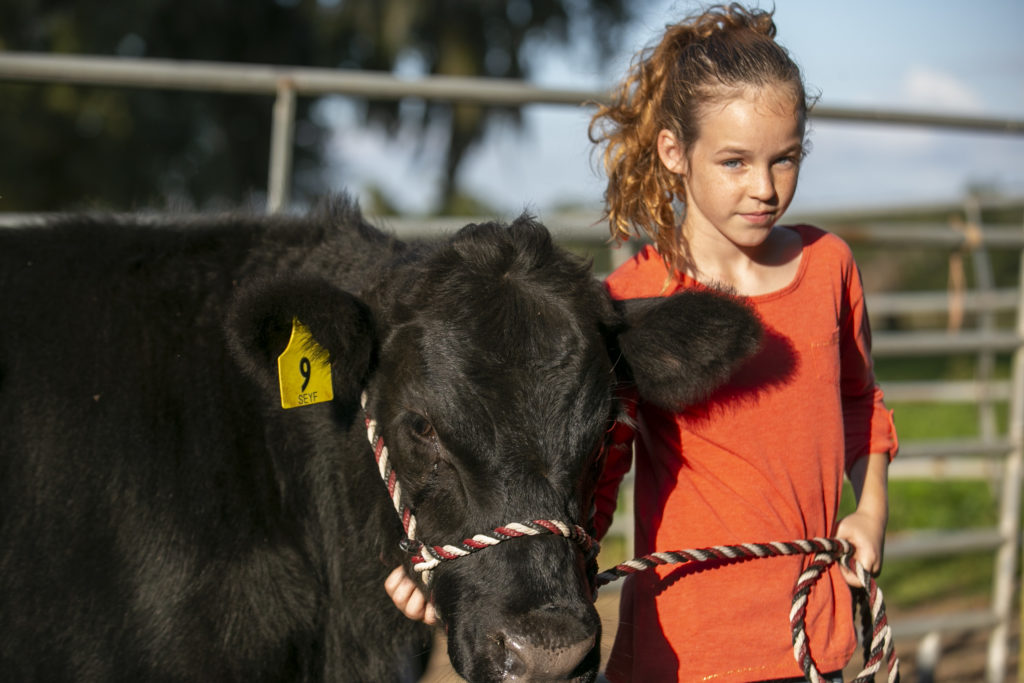 The elder Baldwin was able to expand his route and therefore earn more cow money thanks to Trigger.

“He was 9 or 10 when he got a pony named Trigger,” recounts Tony. “The family story is that Trigger quickly learned the route and when the last paper was delivered, he automatically turned around and went home.”

In 1947, at the age of 15, Baldwin bought his first two registered Black Angus heifers, young female cows. It was those two cows, who were bred and their offspring sold, that the family considers the official beginning of Baldwin Angus Ranch. When the Korean War began, the cattle business  was put on hold as Baldwin served in the U.S. Army from 1952-1955. When he returned to Ocala, he wasted little time in reviving his cattle business dreams.

“Our father worked as a carpenter and other odd jobs to save up enough money to buy cows and land,” Tony explains. “In 1955, he bought the first 40 acres of this ranch and then just kept buying any surrounding land when the opportunity came up. At one point, the ranch was 600 acres and he ran 500 head of registered Black Angus cattle.”

Along the way, the elder Baldwin was a pioneering innovator when it came to the cattle business. By trial and error, he helped develop a strain of drought-resistant crimson clover and perfected a method of using anhydrous ammonia in winter feed to increase protein value. Baldwin worked with the American Angus Association in the late 1970s to create the U.S. Department of Agriculture’s Certified Angus Beef label. In January 2018, in celebration of the 40th anniversary of that accomplishment, the Certified Angus Beef label was painted on the red Baldwin Angus Ranch barn that fronts I-75. Forty ranches across the country were chosen for the honor, and the Baldwin Angus Ranch was the first.

“Our father was a tireless promoter of the Florida Angus cattle industry. He visited more than 20 countries around the world and helped create an international marketplace not just for Baldwin Angus Ranch, but for all of Florida livestock,” says Alan. “Here at home, he worked with schools, 4-H groups and colleges to encourage youth involvement in agriculture. It was his passion.”

Baldwin, who passed away in December 2016, was involved in every local, state and national cattle association and received numerous honors throughout his lifetime. A sampling includes 1993 Southeast Farmer of the Year and a 1995 induction into the Florida Agricultural Hall of Fame. All well-earned accolades for a 6-year-old boy who loved cows. 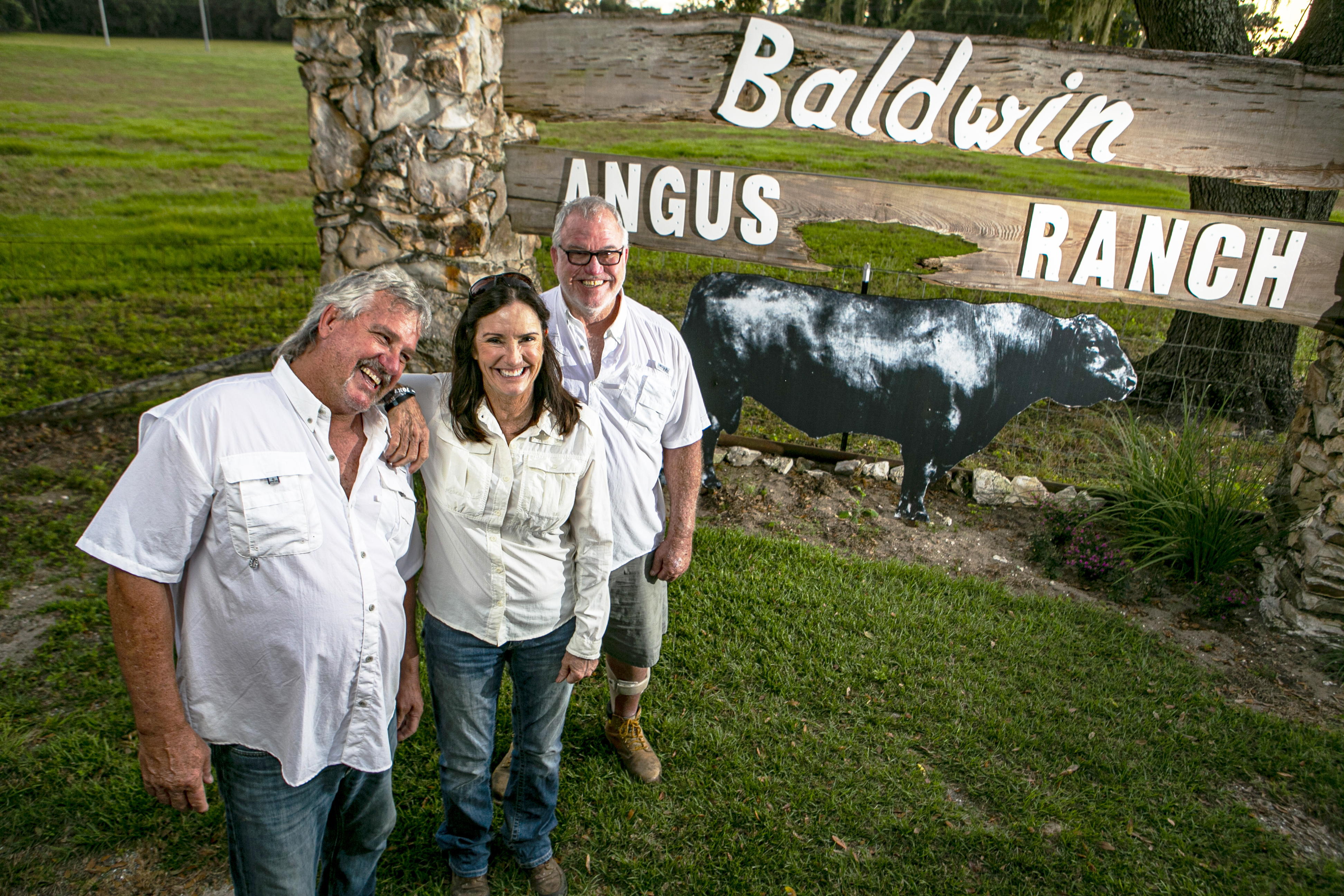 Today, the Baldwin Angus Ranch operates as a corporation, made up of Tony, Alan, Joy and their children. Some of the children are involved in the day-to-day operation, while others are not. Tony’s son Asa (18), daughter Christine (37) and Alan’s son Austin (34) are the most involved. About 20 family members currently live on the ranch.

The ranch is a cow-calf operation, raising Black Angus stock for those who want to start their own cattle businesses, both small and large. The Angus is a breed of small, hornless beef cattle of Scottish origin. Adult males typically weigh more than 1,800 pounds with females tipping the scale at more than 1,200 pounds. The ranch herd numbers 200, including 85 to 90 mama cows, and two breeding bulls.

“We sell weaned calves, young heifers, to people all around the country. We do occasionally sell young bulls as well. People come to the ranch to pick up cattle or we’ll bring them to them,” says Alan. “In my father’s lifetime, we exported cattle to other countries, but that stopped when mad cow disease struck. Now our business is only in this country. Our reputation and word of mouth has kept us in business.” 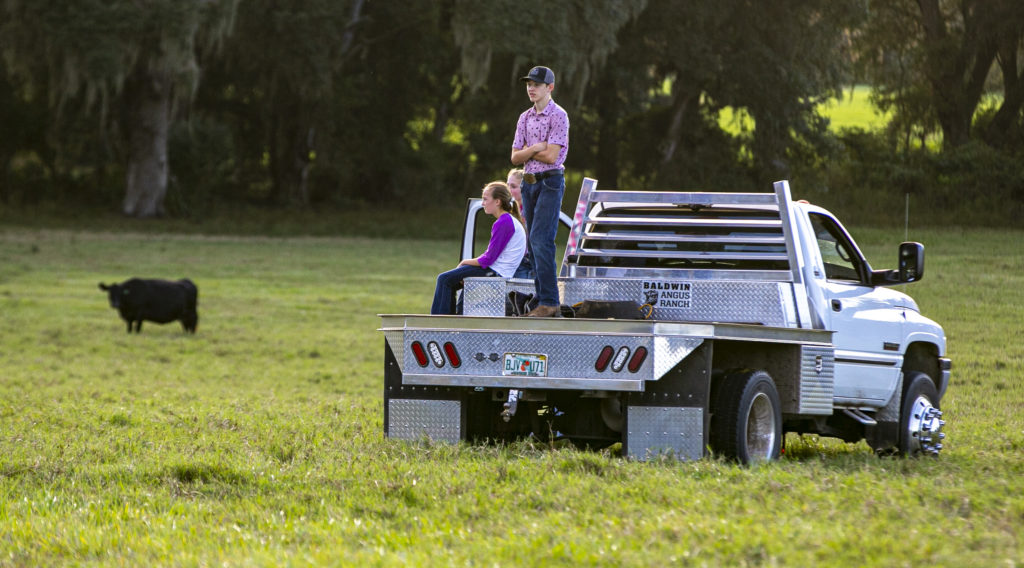 The Baldwins still get up at daylight to feed cattle, seven days a week.

“We feed grain to our bulls regularly, as well as to our weaned babies and heifers for about a year,” explains Joy, whose husband Wyatt Papy works in construction and pitches in when needed on the ranch. “We order 25 tons of grain three times a year.”

Of course, cows are grazing animals. The Baldwin Angus Ranch pastures are planted in Coastal grass, which is a hybrid of Bermuda grass known for being drought and pest resistant. In the summer, the pastures are mowed for haylage. The baler distributes the hay into a special machine that wraps it into long spiral white plastic tubes. Four feet in diameter and 200 feet long, the 225 haylage tubes sit across the pasture like an invading swarm of giant caterpillars.

“That haylage serves as high-protein forage for the cows in the winter,” says Alan. “Tony, who’s a phenomenal mechanic, made us a special tool that we use to open up a haylage tube.”

For winter grazing, rye grass is planted and the cattle graze on that for two hours a day before being brought to the holding pasture. There the mama cows are checked if they are ready to be bred again. Then the cows are turned out in the haylage pasture overnight.

“Rye grass is very high protein,” says Tony. “So you don’t want your cattle out on that all day long.”

When it’s time to bring the cows in from the rye pasture, Joy’s border collie Lou is up to the task.

“All I do is open the gate and Lou goes to work,” says Joy. “She’s a herder; she never barks. When the mama cows see her come into the pasture, they know it’s time to go. She brings in the whole herd all by herself. She’s my girl and if I could give her a seat at our dinner table, I would.”

Ranches run on seasons. Breeding begins in January via artificial insemination; calving is from October through December; weaning is in June with the babies being tattooed and registered with the American Angus Association. Then the whole cycle begins again. 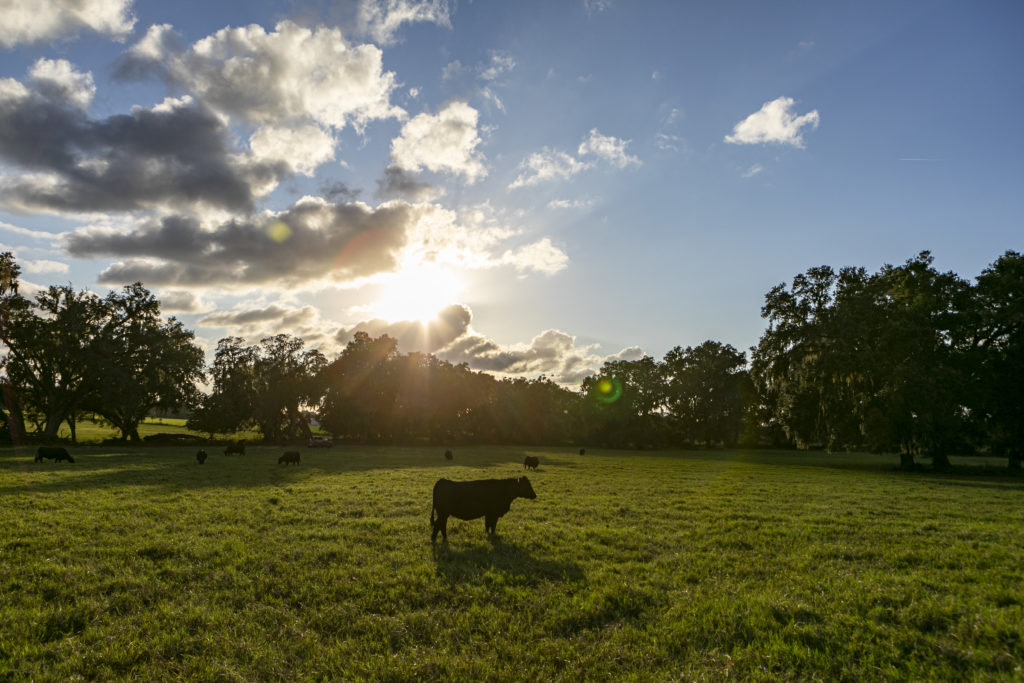 “I love the calving season,” says Joy. “I really enjoy seeing a new crop of newborn babies and watching them grow up.”

Born out in the pastures, those new babies are the life’s blood of the operation and are protected by a guard donkey.

“Newborn calves are easy prey for coyotes, but with a guard donkey we don’t have that problem. Donkeys are territorial and have a natural aversion to canines, so they will chase off coyotes,” Joy explains. “We’ve had guard donkeys on the ranch for 20 years. April, our current guard donkey, lives with the mama cow herd and helps keep the babies safe.”

And like the multiple generations of cattle on the farm, a new generation of Baldwins is in the mix, including part-timers Asa and Erin (who is known to spoil the cattle with treats), and Alan, Tony and Austin who work there full-time. Members of the youngest generation, Ellie Damron, along with Michael, Leila and Bailey Baldwin, are showing cattle in the Southeastern Youth Fair in February.

No matter the season, there’s always work on a ranch: fences to mend, water troughs to keep clean and full, equipment to fix, mowing, weeding and cows to doctor.

“It’s a lifestyle that’s not for everyone,” Tony admits. “I drove a semi-truck for a while. Joy went to Texas and made a good living showing cows. Alan is an excellent carpenter and has done well with that. But one by one, we came back to the ranch full time.”

“The ranch is our life,” Joy asserts. “We consider ourselves fortunate to be able to do this as a family.”

“Our father’s goal was to raise the best quality Angus cattle possible,” Alan adds. “It’s his legacy and we’re carrying it on.”