In making her historic mark on the bench, this Ocala judge says it is important to follow your passions and to help others along the way.

Judge Sandra Edwards-Stephens Champ’s path from her birth in Chicago to serving as a senior judge in Florida’s Fifth Judicial Circuit included practice as one of the few female African American attorneys in the state and becoming the first female and first black judge in the circuit.

This intrepid trailblazer has practiced law with the Florida Department of Transportation, with law partner Elmira Conley, with Legal Services of Greater Miami and the University of Central Florida, and represented the United States with the Center for International Projects in Russia, Estonia, Hungary and the Czech Republic.

She credits her success to her own tenacity, having “next step” and long-range plans, and a strong network of supporters.

Her work has earned her honors including, in 2018, the biennial award to an outstanding legal professional, bestowed by the Fifth Judicial Circuit Professionalism Committee. The circuit covers Marion, Citrus, Lake, Hernando and Sumter counties. 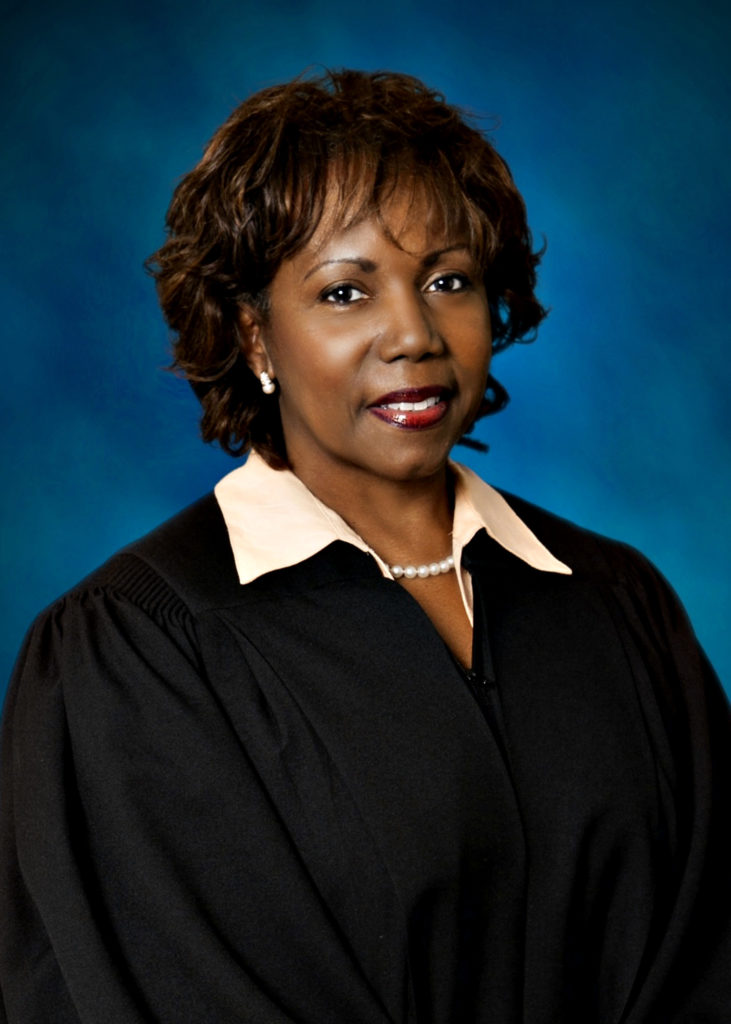 Along with honors and awards from, among a lengthy list, the NAACP, Florida Bar Journal Editorial Board and Delta Sigma Theta Sorority, Champ was inducted into the Marion County Black History Museum Hall of Fame and received the Distinguished Service Award from the Florida Council on Crime and Delinquency.

And, there is a street named for her, which runs past the courthouse in downtown Ocala. 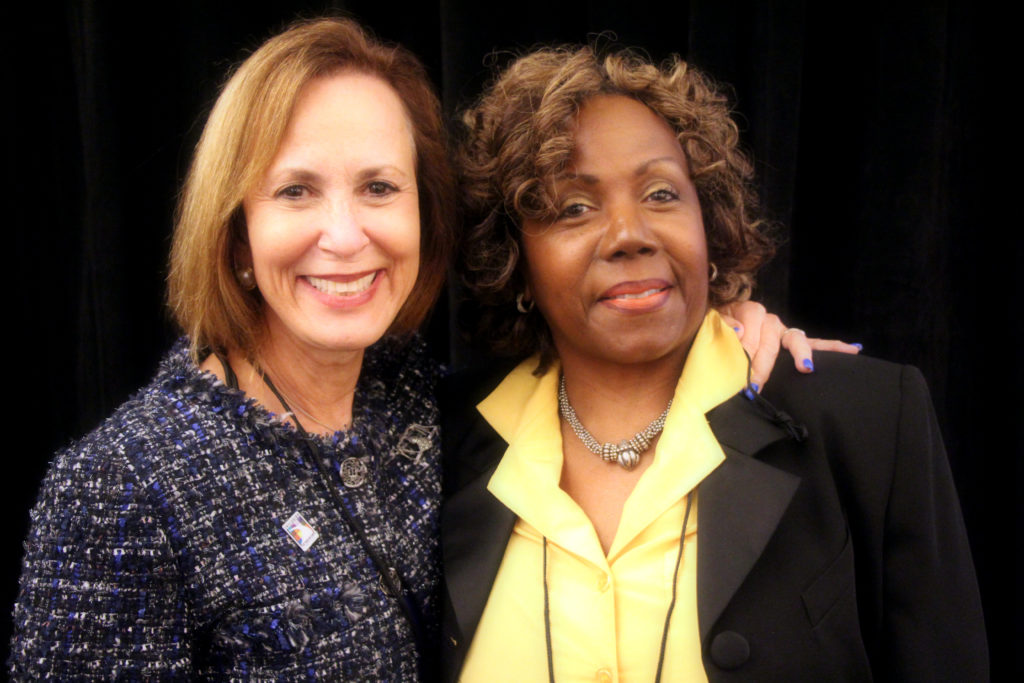 “I was very proud when they named a street after me, and did it during my lifetime,” she says, adding that the “award for professionalism from the circuit was truly an honor because I always worked to be the ultimate professional and I always try to exhibit that in the courtroom and outside the courtroom.”

Champ, who was known for many years as Judge S. Edwards-Stephens, which is the name on the street sign, earned her bachelor’s degree in special education from Southern Illinois University and law degree from Nova Southeastern University Shepard Broad College of Law. Most recently, doing the work after hours and over a span of time, she was proud to earn her master’s degree in Biblical Studies from the Moody Bible Institute in Chicago.

Champ came to Florida with her then-husband, a pastor, in 1972 and was teaching in Broward County when she decided to pursue a degree in law.

“It was about 1978 and we were assigned to a mission church in Key Largo,” she recalls. “I had been teaching special education in the public schools of Broward County for seven years and knew it was time for a career change. Some of the parishioners at the church had legal problems but were afraid of the legal system. I was led at that time to pursue a legal career.”

She relocated to Ocala in 1989, when her husband was appointed as pastor of St. Paul African Methodist Episcopal Church. 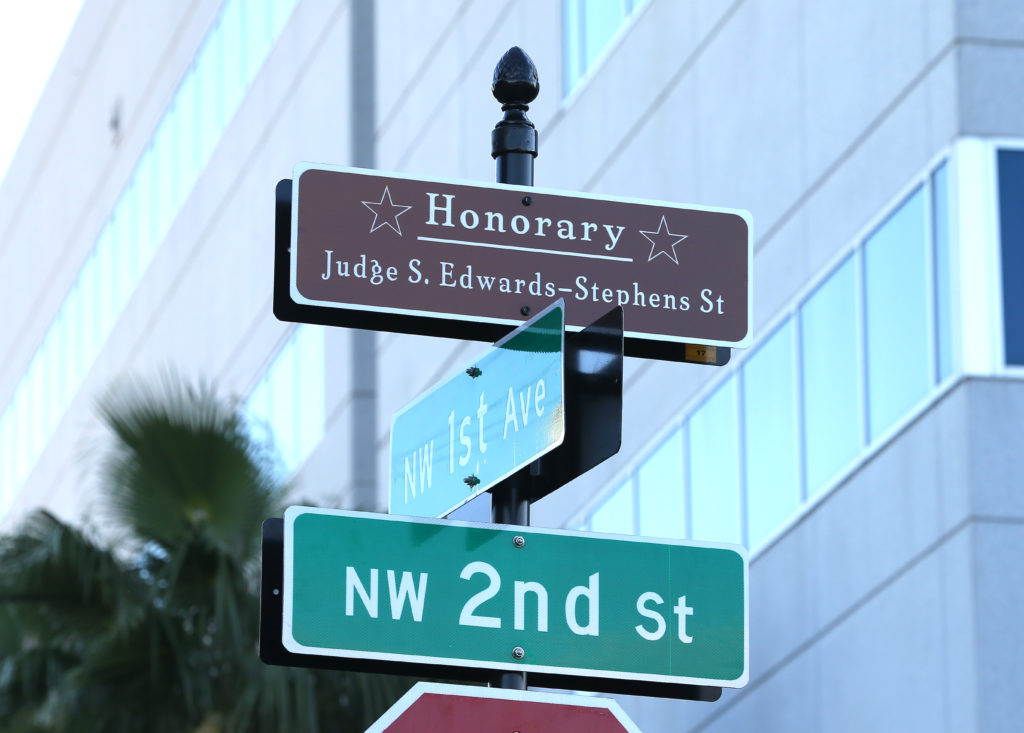 By then, she was “working as an attorney for the Department of Transportation with the district in DeLand, commuting to Ocala every day,” she says. “I was a senior eminent domain attorney.”

She was elected to the bench in Marion County in 1990 and was appointed to the circuit by Governor Jeb Bush in 2000.

“They had no women in the Fifth Judicial Circuit before me and no African America judges either, so I knew I had to put the best foot forward, as my mother would say,” she recalls. “And now they still don’t have any African American judges. I am doing senior judge work, but that’s not the same as being actively on the bench.”

Champ says that when a judge retires from the bench, the Florida Supreme Court can appoint them, if they so desire, to be a senior judge.

“And then you work throughout the state as called and as you’re willing. You fill in for an active judge, or for a circuit, such as I did when I was covering telephonic hearings for the Fourteenth Circuit in Panama City as a result of their overload of cases resulting from the hurricane in 2018,” she explains. “You’re like a substitute teacher, but you’re a substitute judge.”

“Sandra Champ was my mentor when I first became a county judge many years ago,” offers Circuit Judge S. Sue Robbins. “She has always had that extra something that separates the extraordinary from the rest. She has passion, perseverance and stamina. She continues to inspire us. Her undeniable beauty is not only on the outside.”

Champ also extols the virtues of the role models who helped her achieve her phenomenal success. 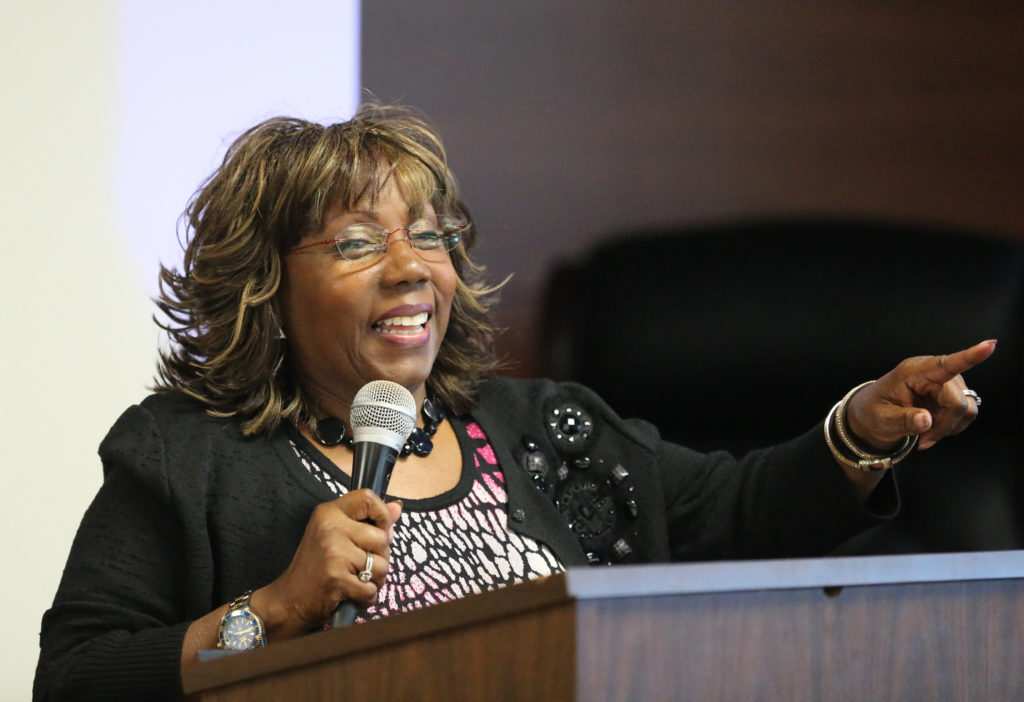 “I had a lot of encouragement for sure. My mother, who lived the last 14 years of her life in Ocala, was very supportive, more psychologically and emotionally, and in how she taught me and was an example,” she shares. “My brother Ozzie, one of four brothers, was very encouraging. He was a humble person but accomplished so much. He got his doctorate and taught at the University of Michigan and Harvard, then went into the ministry following his passion. He pastored for about 20 years and was just a great example. My partner in law, Elmira Conley, was 10 years my senior. She was licensed in three states and came here to Florida and we opened an office in Winter Park in the 1980s. She was very encouraging.”

In lamenting the current lack of diversity in the Fifth Judicial Circuit, Champ says she hopes Ocala attorney LeAnn Mackey Barnes will someday make a successful bid for a seat on the bench. And, in offering advice to all younger women pursuing a career, she says the first thing she would tell them is to have a “go-to” source in life.

“We all need spiritual, emotional and psychological strength and guidance. My go-to source is God,” she avows. 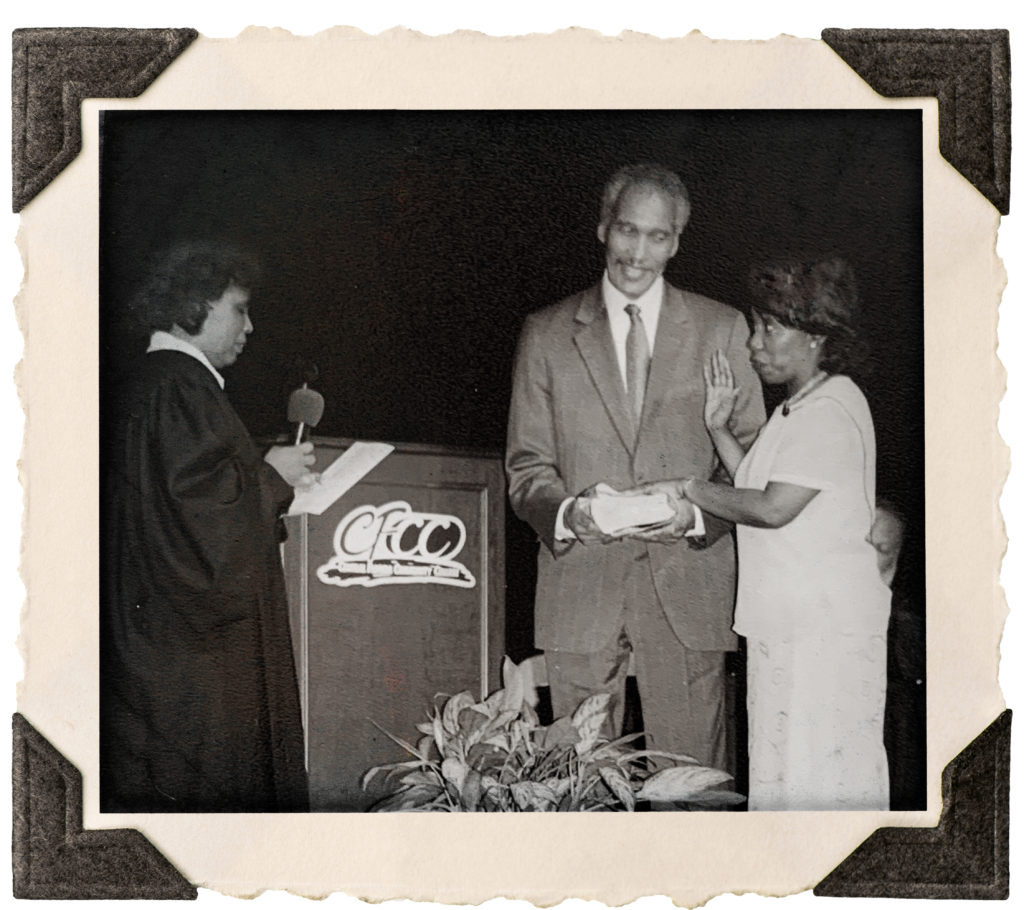 “And I would advise they have a ‘What’s my next step?’ plan as well as a long-term plan,” she adds. “The long-term plan and goals sometimes change and you can’t see every step of the way—you never will—because typically we’re not in total control of our life and our plans, but you can have a plan, and you should always be questioning, ‘What is my next step?’”

She suggests taking things “moment by moment, day by day, week by week. And then take some action when you can, on that next step, and never stop improving. Never stop working toward becoming more proficient and better in every area of your life. You’re not going to be perfect and you’re going to have lows and highs, you may have some regressions, but you’ve got to go forward. And keep going.”

Champ is a fan of Ocala as a place in which to raise a family, but wishes there were more opportunities for younger professionals.

“It is a peaceful place. It is more rural and reminds me of my home life as a child after we left Chicago,” she notes. “It has a little bit of just about everything to offer and is in a good location.”

Champ notes that she and her husband of 15 years, Thomas Champ, a retired naval lieutenant commander, are active in Ocala, especially in their church. She says their chance meeting was a “miracle” from God. 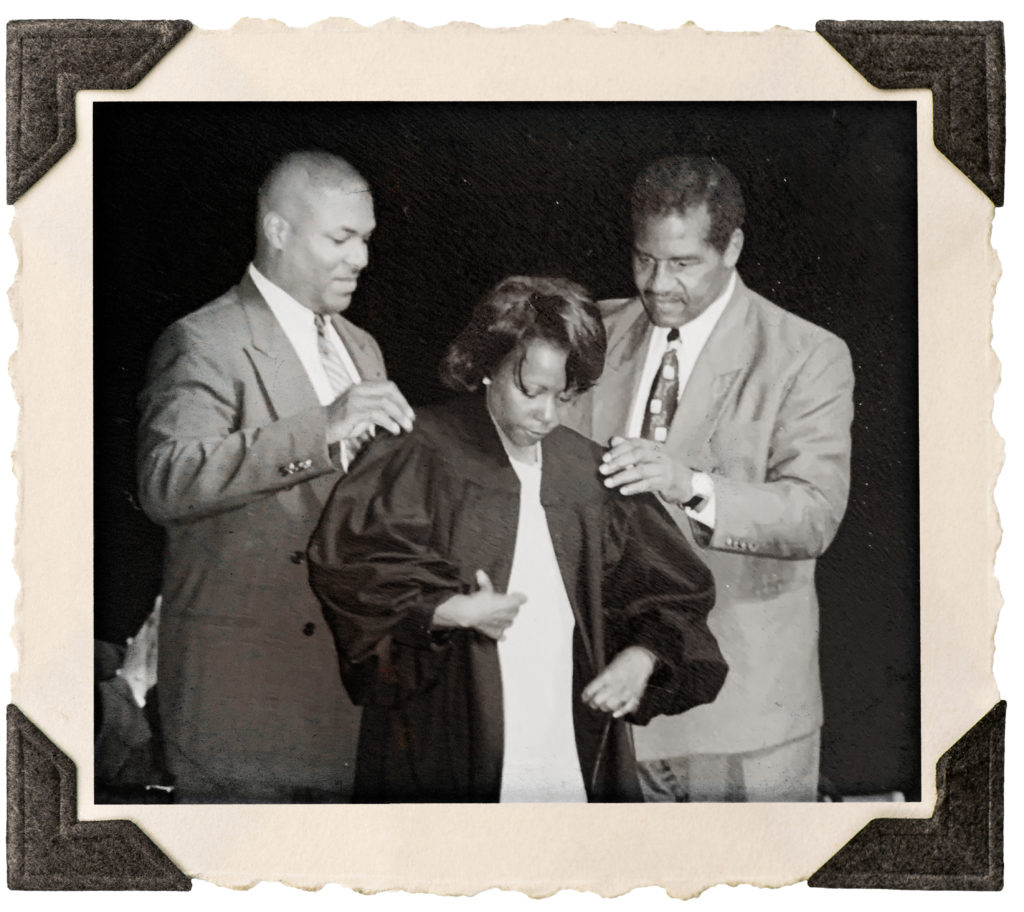 “It was at the airport in Orlando,” she offers with reverence. “I was on my way to Chicago, to the Moody Bible Institute, he was on his way to the islands. We just started talking. We kept in touch. After two years, he asked me to marry him.”

Between them, they have four children and six grandchildren, ranging in age from 3 to 25.

For fun, the judge loves to be outdoors, “just enjoying being there.” The one thing that makes her heart soar, though, is singing.

“I like to sing, but it’s more than that; it’s my passion. And it’s not that I think I can sing really well, although some people say so, I just enjoy it for myself because it lifts my spirits,” she reveals, her voice lilting a note higher. “I sing in church, and sometimes solos for events, or with jazz artist Rudy Turner. I just enjoy singing. It’s very uplifting.”

She also loves to travel and she and her husband recently notched off an item on his bucket list—visiting the historic Machu Picchu site in Peru.

“I encourage people to do what they enjoy, what they have a passion for. Don’t miss out on that in life,” she offers. “And lift someone else up when you can.”

In observing the beauty that exists in the here and...

Ocala native Brittney Mahaffey is not only praised by her...

Guardians of the Natural World

Environmentalists Guy Marwick and Bob Knight are using their expertise...

The Secret is in the Sauce

This month I am sharing my secrets about two Italian...

What is a curator? Appleton Museum of Art’s Cura

It would seem that many experts agree that educati

A meditation session a day keeps the anxiety away!

With a naturally jubilant attitude towards life, S

All local, all the time. The Ocala Gazette, a new

Home care or assisted living…how do you decide?

Many of us do not consider the reality of cognitiv

Environmentalists Guy Marwick and Bob Knight are a

At long last, Dave Schlenker is diving into the se

Shot on location at the historic Coca-Cola bottlin