Every journey begins with one step. For Claudia O’Brien, a unique artistic journey began with one photograph. One afternoon about two years ago, Claudia was reviewing digital photos on her computer screen that she’d taken earlier that day in an ornamental garden. As she admired a Tropicana plant’s striking, multi-colored leaves in one of the images, she imagined how a single leaf would look isolated from its busy background. 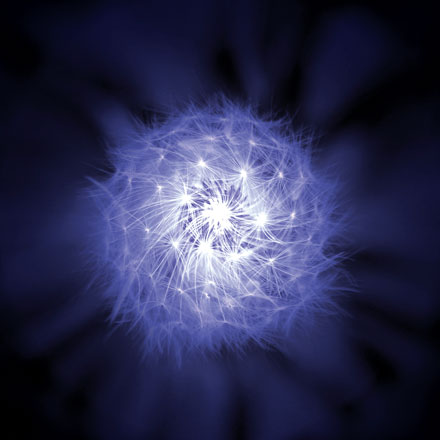 “I imported the image into my photo program and started experimenting,” says Claudia. “I found that by judiciously adding color, light, and texture, I could convey my personal feelings about the subject.”

She spent many hours on the image until she was finally satisfied. The process and its result launched her in a surprising new direction.

From that initial image, Claudia’s portfolio has grown into scores of digitally modified photographs that she calls “Lightations.”

At first, she printed the images out at her desk and framed some of them as gifts for family and friends or put others on the walls of her own home. Gradually, through word of mouth, she began to sell some of them. 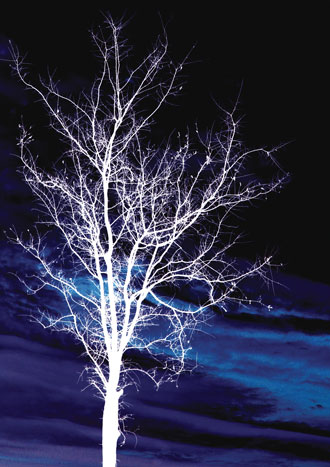 Sometimes there will be an unlikely pairing such as
Tree by the Sea, a barren, illuminated tree set against the backdrop
of a purple blue sea.

“My family has been so supportive,” she says appreciatively. “My son’s gift to me that first Christmas was a check to cover the expenses of having large canvases made of some of the favorites. That made it possible for me to take the next step.”

Claudia’s work is shown at the SIM Gallery of Fine Art in Cape Coral, near Fort Myers, and at the Crabtree Creek Art & Floral Gallery in the mountains of North Carolina. 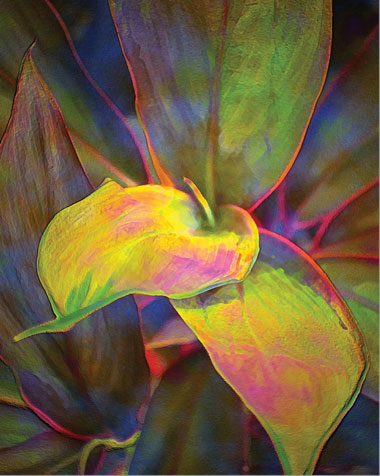 “I found that by judiciously adding color, light, and texture,
I could convey my personal feelings about the subject.”
—Claudia O’Brien

Earlier this year, one of her images was a winner in the “Through the Lens” competition at www.floridaseden.com. The program encouraged photographers to show the natural beauty and resources of our 30-county region in North Florida, in accordance with its comprehensive plan to build a prosperous and sustainable future for both the region and its artists. Claudia’s winning Flower of the Sun and five of her other digital photographs were displayed with the works of five other accomplished female photographers at the Hippodrome State Theatre in Gainesville. 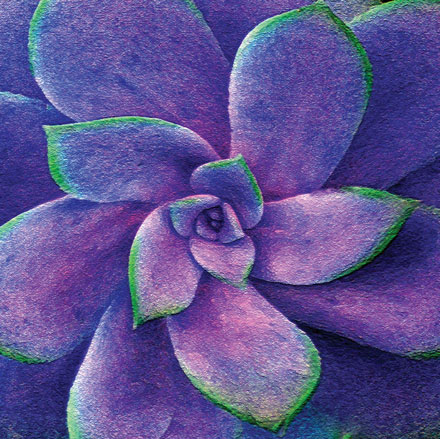 Color in the Desert

She’s been invited to show several works in the Mount Dora Center for the Arts annual photographers’ exhibit. This summer, she’ll have her first full North Carolina show at Crabtree Creek in Micaville. Closer to home, selected prints and canvas giclées are available at The Veranda Gallery & Tea Room in Ocala, at the All About Art Center in Belleview, and at Marion Cultural Alliance’s new gift shop at Brick City downtown. 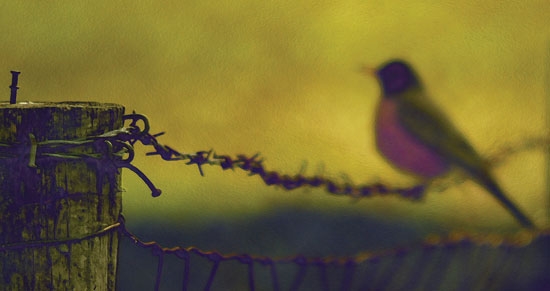 Waiting For Spring is probably Claudia’s signature image. The colors are
rich and textured, the picture so intriguing, that it doesn’t really matter
that robins aren’t really that color.

Claudia says that one of the best things about the development of her art has been getting to know other artists in the area. 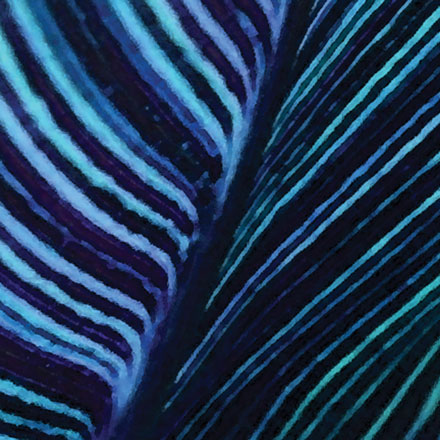 With a nod to what seemed an almost Zen-like discovery,
as well as homage to the leaf’s clear mid-line, she named
her first creation The Middle Way.

“I feel fortunate to have my pictures shown in the same room as theirs,” says Claudia. “I’m really just beginning this journey—I know I have a long way to go and so much to learn.”

Public reaction to her work has been very positive. For Mollie Turner, owner of the SIM Gallery of Fine Art, her response was immediate. 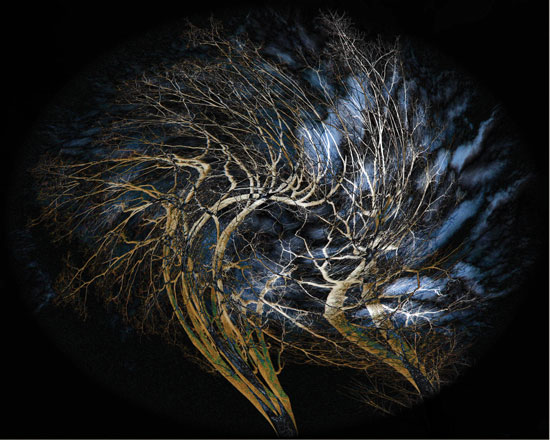 “A woman looked at Storm Trees and said, ‘Oh my, that picture just sets
my soul on fire.”— Donna Damato

“I’m very particular about what I accept for the gallery,” Turner recalls, “but I loved Claudia’s work the moment I saw it. She truly captures the essence of her subjects.”

Donna Damato has heard an earful about Claudia’s work on display in her All About Art Center gallery. 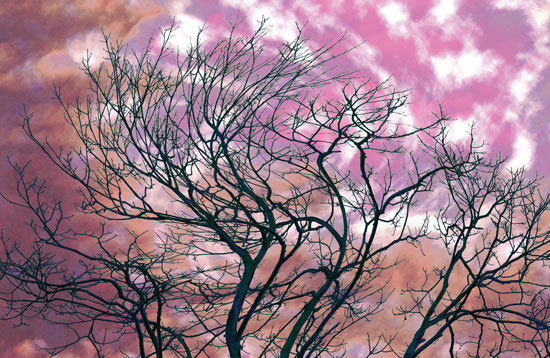 “A woman looked at Storm Trees and said, ‘Oh my, that picture just sets my soul on fire,’” Damato remembers. “Of course she bought it.”

Having made her living in the more practical worlds of journalism and public relations, the foray into a decidedly more artistic side of creativity has caught Claudia a tad off guard.

“At first, it was mostly a way to de-stress after coming off monthly writing deadlines,” she says. “But then I found myself stealing time away from the writing to take more photos and create more Lightations.”

Claudia and her husband, Steve Floethe, earned degrees in media from the University of Miami back in the ‘70s. After the couple moved with their two children to Florida’s west coast, Claudia took photography courses at what is now Sarasota County Technical Institute.

Like most shutterbugs, Claudia always enjoyed taking family and vacation photos, especially when her children were small. Later, she integrated her burgeoning photography skills into her journalistic and public relations work.

That began to change when Steve, himself a veteran journalist/broadcaster and accomplished photographer, bought Claudia “a very nice digital camera” for her birthday a couple of years ago. Like a kid with a new toy, albeit a hi-tech one, she began to take photos with a more artistic eye.

Parade in the Shade on a Hot Afternoon

“Sometimes I take a photograph and know just what I want to do with it,” says Claudia. “Other times, the process takes over and I’m very surprised at the end result.”

In her Ocala home, Claudia displays her newest works in a room with plenty of natural light.

“My experimental wall,” she says. “I hang new pieces there to get feedback from family and friends.”

The first phase of Claudia’s work is infused with bright, bold colors and light. She attributes that affinity to “having grown up in the neon colors of Miami in the ‘50s and ‘60s.” Her childhood also influenced her early attraction to the work of Georgia O’Keeffe.

“I’ve always loved her strong, saturated colors,” says Claudia. “Some of the colors I like to incorporate seem to be ones she liked as well.”

Waiting For Spring is probably Claudia’s signature image. A slightly out-of-focus robin, with a color-enhanced black head, purple breast, and dark green wings, is perched on a barbed-wire fence against a muted golden sky. The colors are so rich and textured, the picture so intriguing, that it doesn’t really matter that robins aren’t that color. An added bonus, the bird seems to be waiting for something. 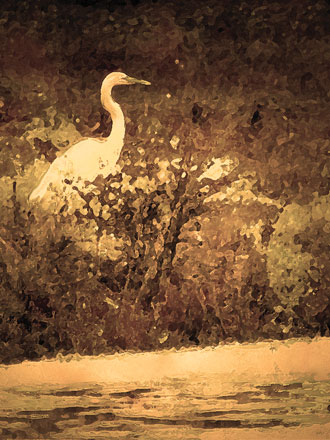 Claudia remembers the cold winter morning she took the original photograph of this particular image that hints at a kind of visual eavesdropping. Thanks to her skill, we also become silent witnesses to a private moment of bird watching.

“I’m having so much fun,” Claudia concludes. “The very best part is having a practical reason to take the time to really look at what we see every day. I feel like the whole process has given me a gift I never expected.”