Meet seven people in our community who have made health and fitness a lifestyle. Each of them does something different, but they all have one thing in common to keep them going. Their secret? They love what they do. 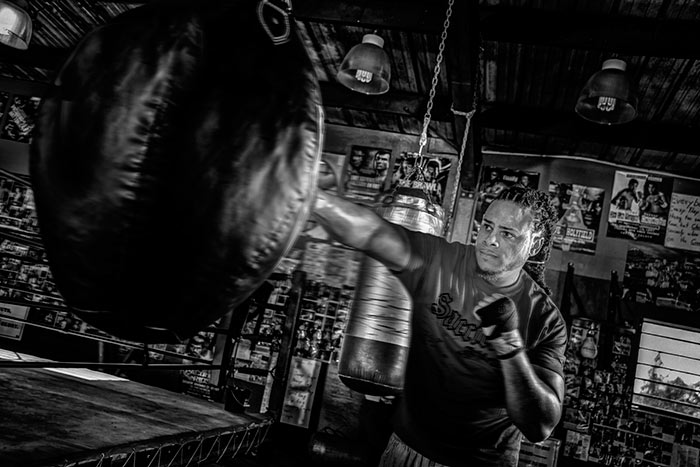 Eye Of The Tiger

Behind IHOP on Pine Avenue, there’s a warehouse with two garage-style doors open and several sweaty fighters jumping ropes, punching bags and sparring. On this particular morning, it’s 9am and 32-year-old Kahlil Smoot walks into the John 3:16 & 17 Boxing Club, turns up the music and starts working out on a speed bag.

There’s a boxing ring, several duct-taped bags hanging from the ceiling, and benches and weights in the background. Below the speed bag is a sign that reads: “If you want to box, train. If you want to win, train harder.” And, if you’re going to train with the gym’s owner and trainer, Tito Ocasio, you better be prepared to work hard. >>

Kahlil’s a heavyweight fighter, and he trains with Ocasio in the mornings and works on cardio in the late afternoons. He says the goal is to train hard enough that the fights seem easy, but boxing is still an intense sport whether you’re training or fighting.

“It’s the hardest sport in the world,” Kahlil says. “You’re gonna take hits in the face.”

Kahlil thanks God and the man who’s been like a father to him for making him a better fighter. He remembers watching his older brother box as a little kid and feeling that’s what he was supposed to do. So, when he first walked into a boxing gym in his early 20s, he knew that’s where he belonged. He’s been fighting ever since, and just last year, he went professional. His record stands at 23-4, and his next fight is scheduled for January 23.

“Kahlil is strong. He’s strong,” Tito says. “He’s got a lot of skills, and his attitude is awesome.”

When he steps into the ring before each fight, it’s not just the confidence built by his training that keeps him strong; it’s the support from his wife, Felicia, too. Instead of getting nervous for him, she gets pumped and starts yelling, “Hit him! Hit him!” 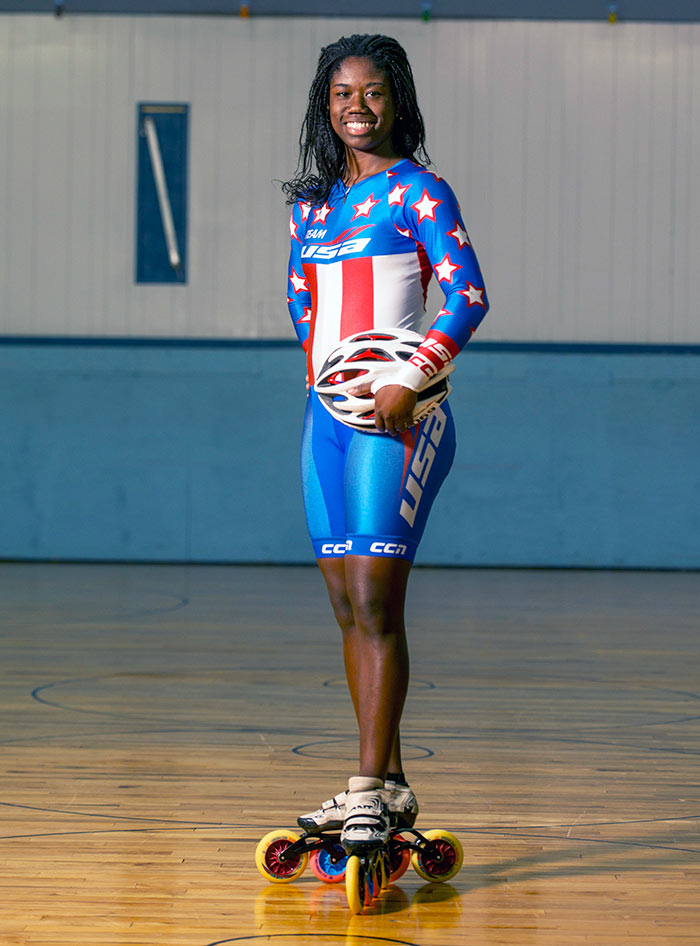 At the coach’s whistle, 23-year-oldErin Jackson speeds from the starting line, bent over and gliding so fast that she grazes the ground with her fingers. It’s speed skating practice at Skate-A-Way South for the Ocala Speed team, and Coach Renee Hildebrand yells, “Go, go, go!”

Born and raised in Ocala, Erin grew up skating. She spent her summers at Skate Mania’s camps and attended the weekly open-skating sessions. At 11 years old, she started speed skating when her mom ran into Coach Hildebrand and told her how much Erin loved skating. The coach invited Erin and her mom to a get-together at the rink.

“After that, I was hooked and joined the team,” Erin says.

Now she has several medals under her belt, and she skates on three different speed skating teams and a roller derby team in Jacksonville. Both skating styles are high intensity workouts, demanding lots of cardio, core and leg strength, and Erin practices between seven and 14 hours each week.

Because she’s been skating most of her life, Erin has developed a close family of skaters and finds it normal to wear spandex most of the time. Though this 23 year old plans to pursue an engineering career and earn her master’s degree in materials science, she also hopes to achieve her goal of winning senior world champion in The World Speed Skating Championships one day.

“The most rewarding part is just having a great time doing something I love,” she says. 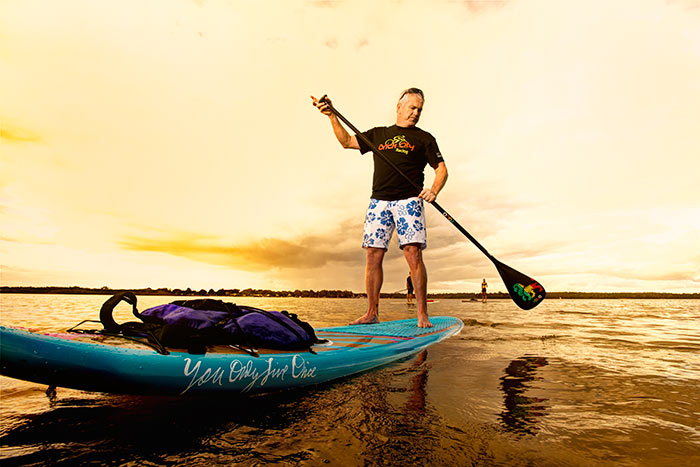 Jon Todd Frobish has been paddle boarding for three years. He’s 52 years old, one of the owners of Brick City Bicycles and the director of sales at Nobility Homes in Ocala. He got into paddle boarding when he was looking for a way to cool off after riding his bike.

“With a paddle board, you can hop in the water and get back on the board anywhere,” he says. “It’s environmentally friendly, and it’s not too expensive.”

Brick City Bicycles sells paddleboards and keeps a sign-up sheet for paddle boarding trips, so Todd often takes people out on the weekends. Although paddle boarding does require some balance and coordination, he says it doesn’t take long to learn.

“It definitely makes a difference in your core and upper body,” he says.

That’s another reason he likes paddle boarding. Because he gets a lower body workout when he rides his bike, paddle boarding gives him an upper body workout, not to mention allows him to cool off in the water. It’s also a fun activity that he, his wife and their two daughters can do together.

“It can be as strenuous as you want it to be,” Todd says, admitting that he’s even taken a nap on his board before.

He usually travels to Crystal River, Rainbow River, Salt Springs or the Silver River for his outings, and, for Todd, the scenery is what makes paddle boarding worthwhile.

“The Silver River is my favorite place to go,” he says. “You never know what you’ll run into.” 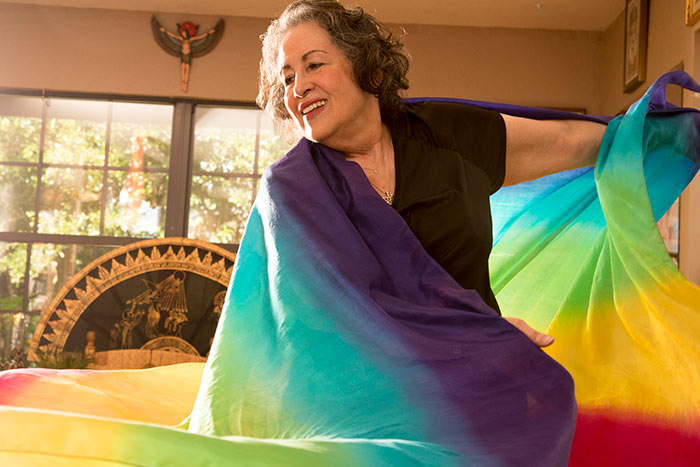 Millie Blonder holds out her hands. There’s not one wrinkle.  “I’m 80 years old,” she says. “I’ve been dancing for 45 years.”

She leans forward as if to share a secret, “It’s all this belly dancing. It keeps you young.”

She turns back to the group of three women in her exotically decorated home studio, flips on Egyptian music, claps and counts “five, six, seven, eight.” Her students line up, and Millie sits, beating a small drum. When it’s Millie’s turn to enter the dance, she moves with ease and skill.

It all started for Millie as a young girl. Born in New York in 1935, she loved watching Maria Montez in the movies.

“I wanted to be her,” she says. “Her hands were so soft and pretty.”

Millie worked for a phone company in New Jersey and didn’t start dancing until she was in her 30s. Her mother told her about Ibrahim Farrah, a performer and teacher of Middle Eastern dance, and Millie ended up studying under him for 17 years. She took the name “Zuhela” and danced in restaurants and clubs, admitting, “I came from a different world.”

When Millie retired from the phone company, she moved to Florida. She went to week-long workshops, learned choreography and taught classes at CTAE for 15 years. She’s never had to advertise, adding that her husband, Chuck, always wonders how people find her. She just laughs it off, “They just find me.”

She’s taught from her home for five years now, and she praises dance for its many health benefits. Her doctors tell her it’s the best thing she can do. Though she’s gone through back and knee surgery, a shoulder replacement and breast cancer, she’s shockingly limber and healthy.

“This dancing pulls arthritis away from you,” she says. “Especially women should dance.”

Millie plans to keep dancing for the rest of her life. And from the looks of it, it’s going to be a long one! 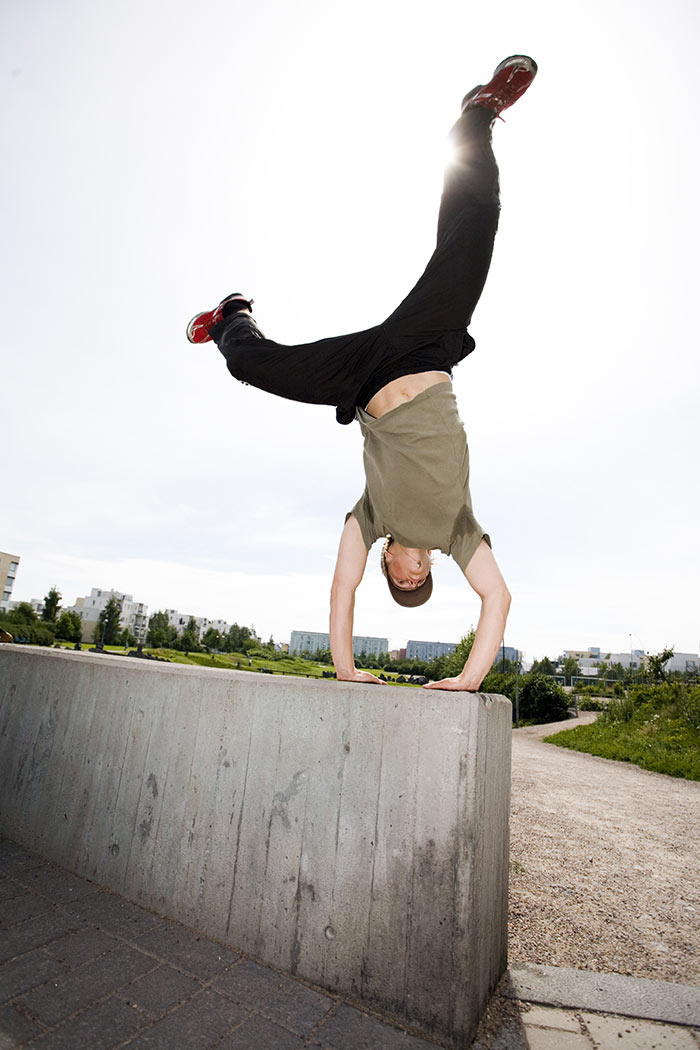 Jasper Webb jumps, grabs onto a high rail, turns his body sideways and swings through to the other side, like it’s nothing. He and two friends, Corey Banta and Corey Nickels, met on the University of Florida campus this evening for a specific purpose: parkour.

At 41 years old, Jasper stays in shape by running along walls, jumping precisely onto small targets (like a curb from a high ledge) and swinging himself on, over or through obstacles. When he’s not teaching psychology classes at Vanguard High School or doing parkour at UF, he’s instructing kids between the ages of 5 and 16 in the art of parkour.

“I’m naturally uncoordinated, so I break it down into steps,” he says as he demonstrates the moves involved in doing a vault jump.

Jasper describes a sphere of ability that everyone has. Though levels of physical ability and body awareness can be obstacles in parkour, fear can also get in the way of doing certain things.

“Sometimes the fear will actually cause you to mess up,” he says.

Banta, 24, explains that practice and confidence can help overcome those obstacles. Both he and 22-year-old Nickels remember how they started compared to what they can do now. Jasper and Banta are part of the statewide parkour association, Florida Parkour (FLPK). The name of their group, Gainesville Parkour, was created to bring together anyone interested in parkour. They’re not an official club, but they use their Facebook group to set up places and times to meet.

“It’s like skateboarding without a skateboard,” Jasper says. “You can do it anywhere.”

That’s what attracted Jasper to this sport. He’s been doing it since 2010 after his friend showed him a parkour video. He immediately saw that it was challenging but also like an art form. As an avid skateboarder, he loved that he didn’t need to buy any equipment for parkour.

“All you need is a solid sole in the front [of your shoes] and comfortable clothes,” he says. 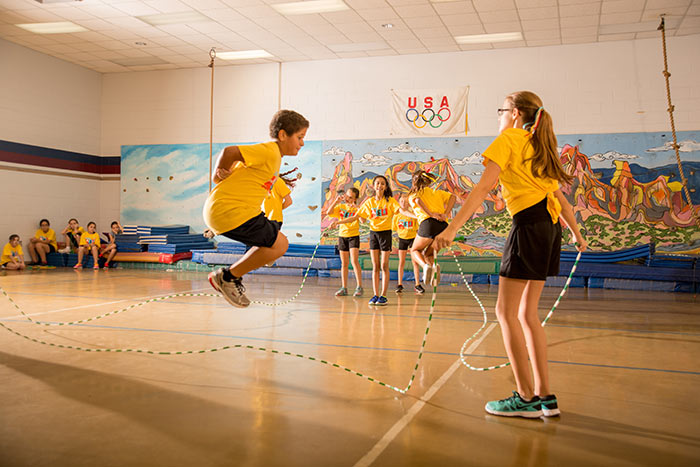 Katherine Hatfield is 57 years old and does something she never pictured herself doing. She coaches the jump rope team at Ft. McCoy School.

She’s been the school’s physical education teacher for 18 years, but she got involved with Jump Rope for Heart through the American Heart Association 12 years ago. She learned how to coach the team through workshops, conferences and training. Now her team performs about 10 times each year.

“The kids are very committed to the team, the school and the sport of rope jumping,” she says. “My work with the Ft. McCoy Jump Rope team has been one of the motivating elements that keeps me going each and every school year.”

Katherine has about 30 students between third and eighth grade on her team, and she holds practices two to three times a week for a couple of hours. She starts beginners off with single jumps before teaching them the more complicated ones. Jumping skills and techniques include partner jumps, long rope, group routines, power jumps and cartwheels.

Jumping rope is a full body workout for Katherine and her team, and she’s noticed feeling healthier and more active because of it.

“Depending on jumps, you can really get your heart beating,” she says. “Fifteen minutes of jumping burns off the calories of one candy bar.” 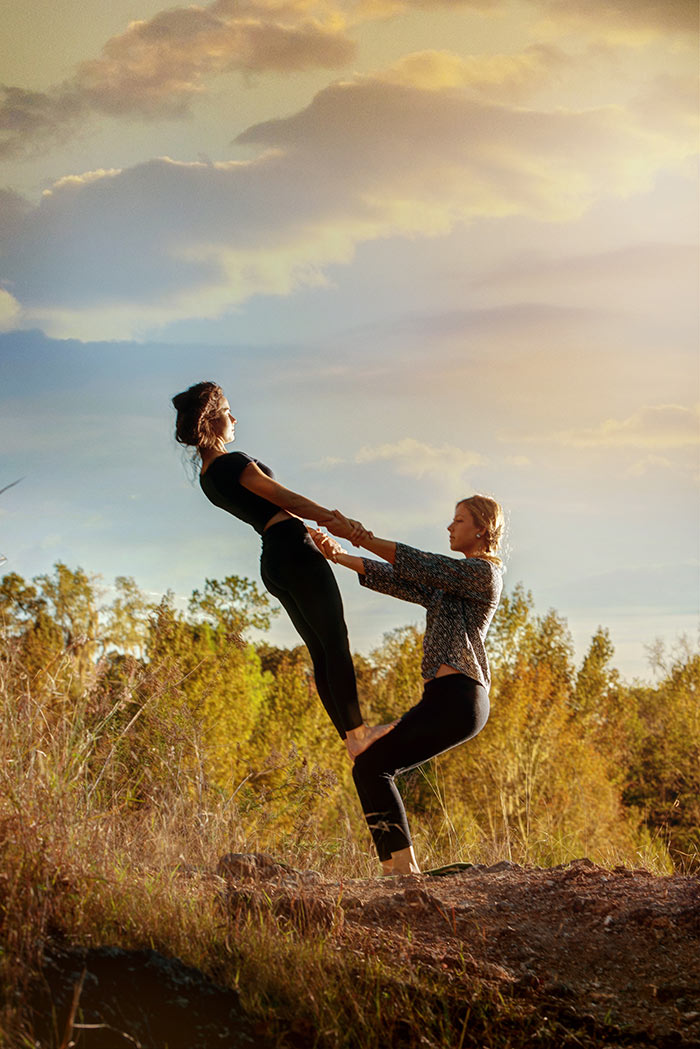 For 29-year-old Chris De Vilbiss and 22-year-old Holly Saitta, acroyoga is all about connecting with others.

“The mental connections that are made with others during partner yoga have brought me joy and a sense of connectedness,” Holly says.

One person acts as the base, lies on their back and balances their partner on their hands and knees. The partner balancing on the base is called the flyer.

“At the advanced level, the flyer is active and performs an array of acrobatic movements while balancing on the base’s hands, feet, knees, shoulders, etc.,” Chris says.

Holly’s been doing acroyoga for two years and is trained in lunar acroyoga and Thai massage. Chris is certified in Sadhuana Yoga Chi and has been practicing acroyoga for four years. Now they teach a weekly acroyoga class at My Yoga Connection in Gainesville.

Techniques like stability, balance and communication are necessary, but the intensity of the exercise really depends on the style of acroyoga and the people doing it.