Turtles and full-time RVers have a lot in common. The ultimate definition of “self-contained,” both take their homes with them wherever they go.

Although there are no concrete numbers as to how many full-time RVers there are in the United States (various RV clubs put the figure at about 1 million, but it’s impossible to nail down), we do know a few demographics. There are some couples with children (typically home-schooled) who have chosen the full-time RV lifestyle but most are retired and in their 50s and older. 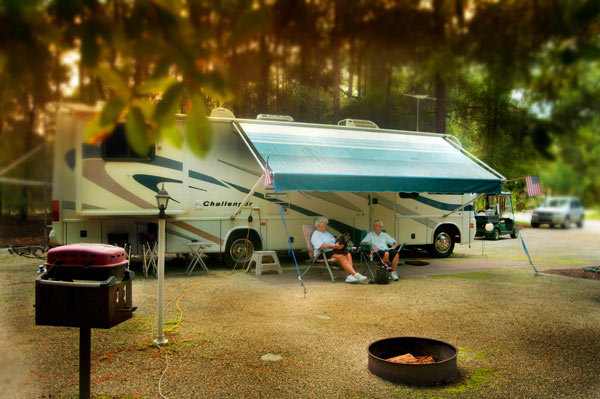 “The typical full-time RVer is generally of retirement age, although we’re seeing more and more people mobile commuting, so they’re living and working out of their RVs. These are people who have careers where they are not location-based. With satellite technology these days, you can pretty much wire them (the RVs) and be plugged in anywhere,” notes Thom Vanderklipp, marketing director for Lazydays RV Center, with locations in Tampa and Tucson, Arizona.

When it comes to going full time, Vanderklipp says most people who make this commitment have already owned more than one RV.

“These are typically buyers who have bought multiple RVs and are fairly comfortable before committing to it full time,” he says. “Full-timers tend to buy the larger fifth wheels and class As. They’re definitely free spirits, maybe a little bit rebellious. It’s the Harley-Davidson set meets the yachting set; it’s not a small investment in those larger fifth wheels and motorhomes.”

So, just who are these full-timers? When you learn more about their lives, you may just want to hit the road, too. 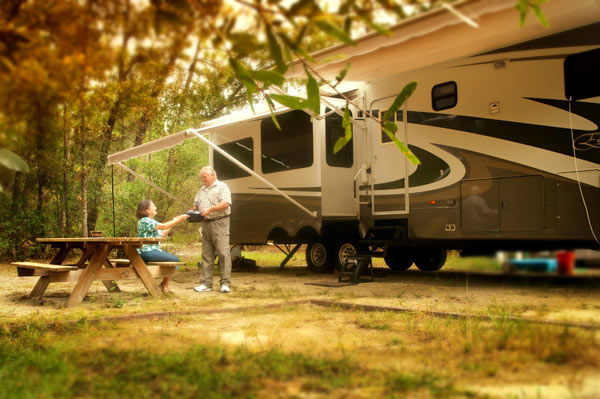 Don, 62, and Nancy Tucker, 59, originally from Crystal River, have been RVing full time since 2004. Before they retired, Don had his own landscaping business for 20-plus years and Nancy put in 25 years at Publix.

Married for 42 years, the Tuckers and their two sons were always into camping. They started with a tent, moved on to a pop-up camper and, over the years, worked their way through five different RVs to their current 39-foot fifth wheel with three slide-outs.

When the hurricanes came through Florida in 2004 causing such destruction and upheaval, the Tuckers were living in a concrete block two-bedroom home in Spring Hill. Now, when a storm is coming, they can simply leave, taking their RV home safely with them.

“The decision to go full time is a big deal. You really need to try it first; it’s not for everyone,” notes Don. “It’s really not advisable to get rid of your home before you try it.”

If at all possible, the Tuckers recommend renting out your home for a few months and trying the RV life before you bite the bullet and go full time.

Deciding to sell your home may not be the toughest task… getting rid of all the stuff you can’t fit into an RV is the real challenge.

“We told our sons to take whatever they wanted, and then we sold the rest at yard sales,” recalls Nancy. “We had a whole room of Coca-Cola collectibles, and we sold them all. We ended up with enough stuff to fill a closet-sized storage unit, and we even got rid of that. When we hit the road, everything we owned was in that RV.”

“On our first trip, I was thinking about something I forgot, and Nancy reminded me we didn’t own that anymore,” chuckles Don.

The Tuckers purchased a lot at an RV park in Crystal River, so, unlike many full-time RVers, they actually have a permanent address, even though they may only be there a few months out of the year. At that lot, they have an 8×10-foot storage shed where Don still has a few tools. (“Some men miss having a work shop,” admits Nancy.)

2012 marks Don and Nancy’s second year of being campground hosts at Silver River State Park, an unpaid volunteer position. As hosts, they have about 20 weekly hours of light duty chores; in exchange, they get a free camping spot with electric. One of the things they like most is meeting new friends along the way.

“You can live in a residential neighborhood for years and not know your neighbors, but with RVing, there’s a lot of camaraderie, whether you’re in a big Prevost motorhome or a tent. You all have things in common,” says Don.

The Tuckers have traveled to Canada and all but six states in the U.S. and plan to see those soon. Glacier Park in Montana has been on their “wish list” for a while, and that’s their next big trip.

“There are lots of rallies and RV clubs. You can take tours and travel across the country as a caravan,” says Nancy. “A lot of campgrounds have dinners and other forms of entertainment, even water aerobics at the pool. We like to take day trips to check out the surrounding towns, and Don does a lot of fishing. You can have as busy a social life as you want or as laid back and relaxed as you want. It’s a simple lifestyle; you’re basically living in a resort.”

Indeed, their fifth wheel has all the amenities they need, including a full-size refrigerator, washer and dryer, satellite dish, HD antennas to pick up local channels, wireless Internet via their cell phone provider and a generator capable of running the whole show if they aren’t in a spot with electric. 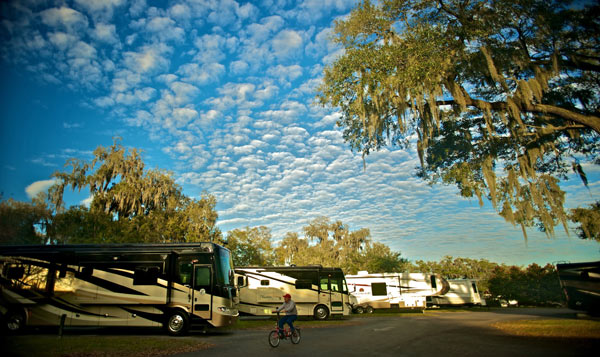 When Danny, 72, and Georgia (“Gee”), 69, Johnson roll into a campground, they have a short ritual that ensures their new surroundings will soon feel like home.

After parking their motorhome and “plugging in,” they put a large shade across the windshield. The awning is unfurled and an American flag is displayed at each end. Georgia puts out their two potted plants and hangs her wind chimes. Danny unrolls the 6×18-foot outdoor rug and the rope light. Next, the couple puts out folding chairs and two small folding tables. Finishing touches include the welcome sign Danny made that looks like a miniature railroad crossing sign and the carriage light on a post that can be turned on and off using a remote from inside the RV. Voila! It only takes a few minutes to create the familiar setting no matter where they are staying.

Originally from the Daytona area where they’d lived in the same three-bedroom home for 37 years, the Johnsons had always loved camping and finally went full time in 2007 after retiring.

“We had a lot of yard sales, but the people who bought our place had nothing, so we left our home furnished and that made it a lot easier. We even left them our linens and vacuum cleaner,” recalls Georgia. “I used to really decorate for Christmas; now we have a two-foot-high tree that sits on the dash.”

Their home on wheels is a 34-foot class A motorhome with two slide-outs, and their two small dogs, Bonnie and Clyde, travel with them. The Johnsons pull a compact-size Nissan on a car dolly behind their motorhome; that extra vehicle makes it easy to explore the area wherever they’re camping.

The Johnsons—who, like the Tuckers, stay at one campground for three or four months and volunteer at various campgrounds, including Silver River State Park—have come a long way since they started camping with a tent in the ‘70s. Since getting their RV, the couple has certainly done their fair share of exploring the U.S. While they’ve covered a lot of territory, they admit their favorite place so far is probably north central Arizona, in particular Sedona and Prescott. They have focused on parks in Florida over the last few years, but wherever they go, Danny and Georgia meet others who love the RV lifestyle.

“We keep up with the couples we meet along the way,” says Georgia. “Sometimes, we actually meet up, but mostly we stay in touch through emails and calls.”

“The first year we did this, we were on the road for eight months straight. We get seven miles per gallon, so we went through about 35 gallons if we did 300 miles a day. Gas prices definitely impact RVers,” says Danny.

A model railroad buff, he hasn’t given up that hobby; he’s currently building an “N” gauge train set and village on a 2×4-foot board.

“We’re more active now than when we lived at home,” notes Georgia, “and I have a lot less housework.”

Like most full-time RVers, the Johnsons have no regrets about their on-the-road lifestyle.

“We don’t miss anything about not having a home,” says Danny. “We love the freedom!”