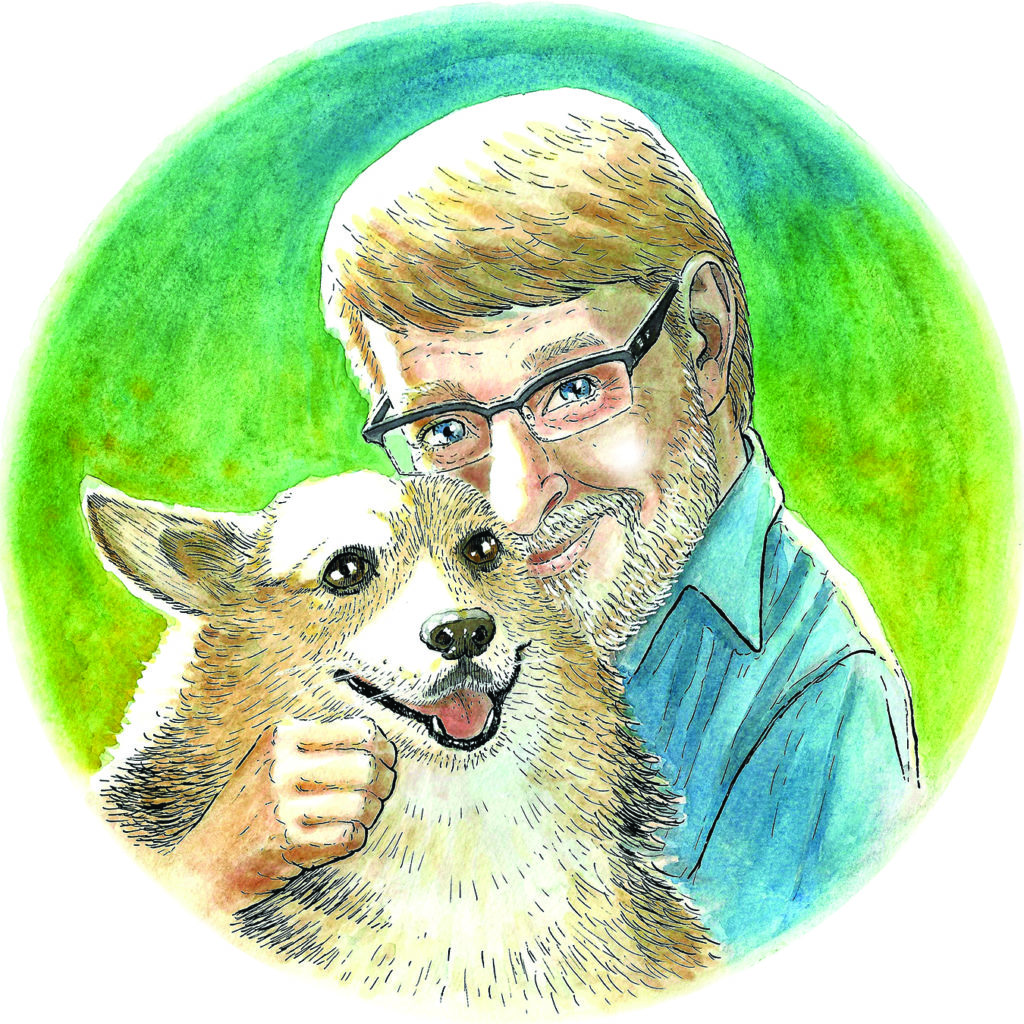 In 2007, our neighbors saw something they can never unsee: A pale, middle-aged, unwashed, barefoot chunk of agitation in an old bathrobe sprinting through their yards.

It would have been terrifying if not for the adorable Pembroke Welsh Corgi puppy gleefully outpacing the Sasquatch in a bathrobe.

That schlub, of course, was me, and the corgi was Abbey Tubesox, an ear-heavy ball of euphoria named for the Beatles’ Abbey Road.

Abbey adored the chase. If she saw daylight, she was off to the races.

Cause and effect: She bolts, old dude follows. Good times. For 14 years, she owned those streets–knew every curve, every smell, every neighbor.

On a recent Thursday night, Abbey hit those streets once again, only this time she was following me. I pulled her in a blue wagon. With a dangling tongue savoring the August air, she surveyed her kingdom one last time.

She had not been able to walk for a month. Her back legs were props and the tumors grew fast. I carried her everywhere and held her as she did everything.

It was tough. It was an honor.

She barked a lot in her final days. I think she was telling us she was ready, whether we were or not.

Amy and I kissed her and wept when she finally went to sleep. Gracefully. Indeed, she was ready.

When she passed, I held her one last time and started rubbing her back. Overwhelming sadness. Then, oddly, comfort.

I figured it out quickly. Abbey had been in my arms for more than a month. But this time, her muscles did not quiver, her rear did not quake, her bones did not protrude.

For the first time in a very long time, she was not suffering. Her body was at ease, and her spirit…well, who knows what snacks she is stealing or whose butts she is sniffing up there. I just knew she was at peace.

We’ve all been through the loss of a pet–not just a pet, but the pet. The one who raised your kids like a nanny. The one who rushed you when you entered a room. The one who always knew you were sad.

The one who would sucker you into a belly rub when you had no time to rub a belly. When Abbey would roll over, expose her undercarriage to the world and give me that look, I was powerless.

“I cannot resist a corgi belly,” I’d tell the girls. “If Abbey robbed a bank, she could just roll over and all would be forgiven.”

I write these words hours after we kissed Abbey goodbye. There is a glass of wine to the left of my laptop and, as sad as we are, I raise my glass to all lost pets and the humans who adored them. Here’s to a long life of love, mischief, bubbles, silliness, treats, wild chases and, of course, belly rubs.