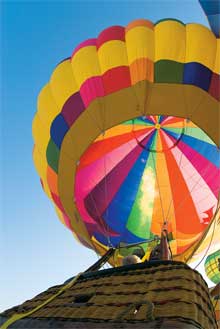 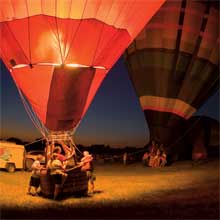 Get ready for a big surprise. Long before the Wright brothers launched their historic airplane flight in 1903 at Kitty Hawk, man had actually already flown.

How long before? Try 120 years before.

The first recorded manned flight took place in 1783 in Paris — in a hot air balloon made from paper and silk by French brothers Joseph and Ettienne Montgolfier. With American representative Ben Franklin reportedly looking on, two noblemen from the court of Louis XVI and Marie Antoinette ascended 500 feet above the city. Their flight lasted for about 22 minutes before landing miles away in a vineyard.

And the Wright brothers can’t even lay claim to the first manned flight in North America, once again being outdone by a Frenchman. In 1793, Jean-Pierre Blanchard accomplished that feat when he piloted a hot air balloon over Philadelphia.

But in all fairness to Orville and Wilbur, some explanation is due. The Wright brothers are credited with the first-ever flight in a powered heavier-than-air machine. Two years later, they developed their prototype flying machine into the first practical fixed-wing aircraft.

HOT AIR BALLOONS, which are powered by hot air generated by an on-board propane gas burner system, are classified as “lighter than air” by the Federal Aviation Administration. Completely dependent on calm wind currents, balloons cannot fly upwind or crosswind. That’s why they launch just before sunrise or just prior to sunset because that’s when the wind is the calmest.

But 30 years ago when David Justice walked out of his house to get a Sunday morning paper and saw several hot air balloons overhead, he knew nothing of their history. He just knew that he’d always been intrigued by them. Seizing the opportunity, Justice dashed back inside to change, jumped in his car, and followed the balloons until they landed.

“I parked and walked into the field where they had landed,” recalls Justice, who was in the commercial construction business at the time. “I asked the pilots a hundred questions about the balloons. Taking a balloon ride was just something that interested me. I never realized then that you could own a balloon.”

As fate would have it, the owner of a restaurant that Justice was building happened to have a hot air balloon. His first flight was in that balloon. Six months later, his second flight was in his own craft.

“We plan to have 30 to 35 balloons at the Dunnellon event,” says Justice. “Some will be our balloons; others will come from other companies and some private owners. A real special treat will be the Energizer Bunny corporate balloon. It’s in the shape of the bunny.”

Weather permitting, there will be balloon ascents on both Saturday, May 5, and Sunday, May 6, just before dawn. Gates will open at 6:30am for those wishing to view the ascent. In the evenings just before sunset on both days, there will be the traditional balloon glow events. In the latter, the burners of the tethered balloons will be fired up to showcase the vivid colors of the balloons.

HOT AIR BALLOONS consist of three parts: the envelope, the burner, and the basket. The colorful envelopes are made of rip-stop nylon, sometimes polyester, with the lower portions made of fire-resistant material.

“We had a heavy fog on one morning last year and couldn’t launch,” explains Justice. “Hopefully, the weather will cooperate with us this year. People have to understand that balloons can only fly in light or calm winds on a clear morning or evening. We are very weather-dependent in this regard.”

No public rides in the balloons are planned at this writing, but the balloon pilots will be participating in some friendly competitions. One is called hare and hound, where one balloon takes off first and then the others give chase. There is another where pilots are scored on how close they can get to a pre-determined target. They drop small weighted markers at the targets. The challenge here is that because balloons drift with the wind, the pilots do not have direct control of the balloon.

“The competitions give the public a chance to see balloons taking off and landing at different times,” says Justice. “In the evening during the balloon glow, spectators will be allowed to get close to the balloons and ask the pilots questions.”

JUSTICE HAS PILOTED thousands of balloon rides and the word he hears most often of the experience is “awesome.”

“People are just amazed at how gentle a ride in a hot air balloon is,” says Justice. “Many first-timers don’t even realize we’re up until they’re looking down at tree tops. Most flights last about an hour and we cover anywhere from five to ten miles.”

A chase crew in a ground vehicle follows the balloon, staying in constant radio contact with the pilot to rendezvous at the landing site. Once the hot air balloon lands, the balloon is deflated and packed onto the chase vehicle. Following that is the traditional champagne toast with the passengers and sometimes with the landowner who permitted the landing.

Asked how the champagne toast originated, Justice tells this tale: “The story is when that first balloon landed in that Paris vineyard, it was attacked and destroyed by the farm owners who were frightened by this bizarre thing landing in their fields,” he says. “So the next time the Montgolfier brothers took a balloon up, they brought along a bottle of wine to share with the landowners once they landed. That seemed to make everyone happy.”

And no doubt saved many a balloon from being destroyed.

Purchase of this ticket will allow admission to all three days of festival.

Gates Open at 6:30am both days

All day — Celtic pipe bands & entertainment; Battle of the Bands