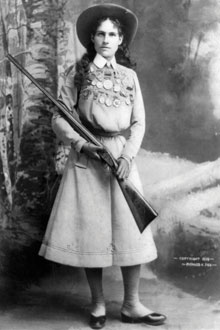 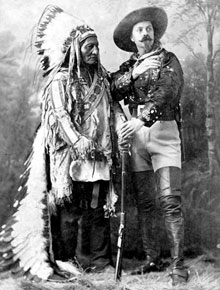 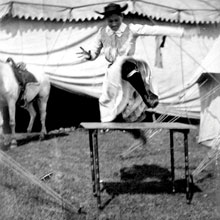 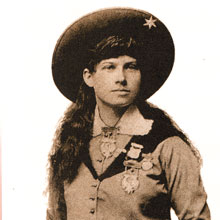 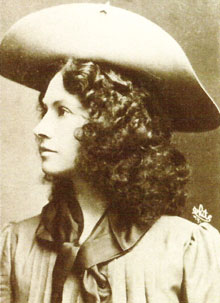 When she was born, her name was Phoebe Ann Mosey; she became Mrs. Frank Butler when she married. But most of the world knew her as the incomparable Annie Oakley.

During the early 1920s, Annie lived off and on in Leesburg, enjoying the hunting in the bountiful woods around the town. Many people didn’t even realize they had a celebrity in their midst as she preferred to be addressed as Mrs. Butler in her private life.

“She used to do shooting exhibits on Sunday afternoon,” says former Leesburg Mayor Bob Lovell. “She and Frank stayed at the Lake View Hotel, which used to stand on the corner where the new library is.”

Lovell is a student of local history and has hoped for years to see something done in Leesburg to honor the famous sharp shooter, who visited Leesburg frequently during her retirement years. At long last, he’s getting his wish with the new bronze statue of Annie and her faithful dog Dave, which will go in the children’s area of the new Leesburg Library.

“Dave was like a member of her family, and he also starred in her show,” Lovell says. “He’d sit perfectly still with an apple on his head, and Annie would shoot it off.”

Petite and attractive, Annie wowed audiences around the world with her skills with guns. Standing only five feet tall, Annie taught herself to shoot with her father’s old Kentucky rifle. After spending her formative years in a community poor house, Annie began shooting to put meat on the family’s table.

In addition to providing food for her family, Annie also shot game that was bought by restaurants. The chefs loved her because she was such a sure shot, she always shot the animals in the head, which meant the meat was never ruined by the ammunition.

Annie Oakley’s life changed forever the day she borrowed money to enter a shooting contest against well-known sharp shooter Frank Butler. Annie had already been banned from participating in local turkey shoots because she’d won too often, but the townspeople were eager to see what she could do in this situation.

Butler was amused when he saw the spunky young girl who would be competing against him. However, his amusement turned to respect and admiration when he shot 24 of 25 targets and Annie hit all 25 of hers.

The two began a relationship after the shooting contest and eventually married on Aug. 23, 1876. Annie began traveling with Frank, though not a part of the show for at least six years. After working one night when Frank’s partner couldn’t make it, she quickly moved into performing.

Frank immediately recognized not only his wife’s incredible skill with guns, but also her showmanship. She presented an image of a shy, demur schoolgirl, but her shooting was always perfect. She captured the audience’s attention with her stage presence and their hearts with her skill.

Annie and Frank’s early shows were similar to Vaudeville, but certainly not as risqué in dress and performance. Always fearful of being accused of impropriety, Annie made sure her clothing was ladylike. She made her own dresses, which were modest but attractive. Though she could shoot more accurately than a man, she was very aware of her femininity and appearance. Still, she was a complicated woman and often difficult to understand.

“Even though Annie rallied to get women equal pay with men, she took no part in the suffrage movement of the day,” Lovell says. “In fact, she didn’t think women should have the right to vote. She was never called Annie Oakley during her personal time. It was always Mrs. Frank Butler.”

It was after Annie and Frank joined “The Wild West Show” with Buffalo Bill Cody that Annie began to receive top billing. Frank, realizing their future lay with his wife’s talents, became her manager, and their time with the Cody’s show was prosperous and enjoyable for both of them.

In March of 1884, Annie met the famous Sioux warrior Chief Sitting Bull, who was the victor over Custer at the Battle of Little Big Horn. Sitting Bull was so taken with the diminutive woman that he adopted her and called her “Little Sure Shot.”

Another highlight of Annie’s career was appearing in Cody’s show during Queen Victoria’s Golden Jubilee.

“Queen Victoria was very fond of Annie, and she had tea at the palace with the queen,” Lovell says. “She stayed for months overseas, traveling through England, Italy, Spain and Germany. There’s a story that she shot the ashes off a cigar while Kaiser Wilhelm II held it in his mouth, but the truth was he held it in his fingers.”

Annie’s tricks included shooting while she viewed her target through a mirror, using multiple guns without breaking her shooting rhythm, and shooting equally well with either hand. Women especially enjoyed Annie’s exhibitions. Cody often had her demonstrate the safety of shooting as a sport for women.

Tired of living in hotels and feeling like nomads, Annie and Frank built a home in Nutley, N.J. Though they enjoyed the idea of establishing a home, both of the Butlers acknowledged Annie’s lack of domestic skills. She was considered a lousy housekeeper and frequently argued with and fired servants.  They eventually sold the home in 1904.

The Butlers left the Wild West Show in 1901 after Annie was in a train accident and her back was severely injured. She required five surgeries to correct injuries to her spine. It was a difficult time for Annie, but she came back, her skill with guns intact.  The couple continued to perform and they eventually joined “The Young Buffalo Show” in 1911.

Generous to a fault, Annie quietly gave to charitable causes and provided money for her family. She frequently gave away free passes to her show. To this day, this type of pass is referred to as an Annie Oakley.

When the Butlers decided to build their retirement home in Cambridge, Md., in 1913, Annie took an active part in its design. The kitchen sink and work area were designed for a five-foot woman, and she was very specific about closets and room shapes.

Annie took up writing during this period, authoring a book titled, “Powders I Have Used,” and writing articles for magazine about her love of shooting and encouraging women to learn shooting as a means of self-defense. Annie also offered to organize a regiment of women volunteers to fight in World War I, but her offer was not accepted.

After they retired, the Butlers made many trips to Leesburg, staying at the lovely Lake View Hotel with their faithful English Setter Dave, which they acquired in 1914.

“She was in a bad automobile accident in 1922, and she did her recuperating in Leesburg,” says Lovell. “In February 1925, Dave was killed when he ran out in front of a car in front of the hotel. Annie went out on Highway 468, which is the Red Road, and buried Dave and put a cement headstone over him. She never felt good about this town again.”

Annie and Frank eventually returned to Ohio to be closer to her family. Her health became bad, and she died of pernicious anemia on Nov. 3, 1926. Frank died of natural causes within three weeks on Nov. 21.

Lovell wanted the statue of Annie Oakley in Leesburg because he didn’t want her to be forgotten.  The Friends of the Leesburg Library raised funds to have sculptor John Bennett create the life-size statue of Annie with her dog Dave, which is the City of Leesburg’s first public art project.

“I learned to fly when I was 15 years old, and every time I went to Taylor Field in Ocala I’d see a memorial to Freddie Lund. I’d ask everybody who he was, but nobody knew,” Lovell says. “I remembered that the other day and searched the Internet for him. I found out he was a stunt pilot from Minnesota who did an air show in Ocala. He died when his plane was clipped during an air show in 1931.”

Lovell pauses, giving thought to what he was saying. “The point is, a 15-year-old boy saw the memorial and wondered who that man was. At 70, he got the answer. Someday a child will walk by that statue of Annie Oakley and wonder who she was; then maybe he’ll look it up and learn all about her.”

A Shooting Star Shines On

Nancy King, a writer in Leesburg, has created a DVD to present the story of Annie Oakley for local school children. It’s called “Shooting Star,” and features details about Annie’s time in Leesburg.

“I prepared it with help from the Friends of the Leesburg Library,” Nancy says. “I did all the illustrations and graphics. I didn’t want to just tell a story; I wanted to give them an experience. I feel like I did that with the shooting demonstration in the opening scenes.”

Copies of the disk have been given to schools throughout Lake County and to the library.

“My main objective was to give them some kind of feeling for her talent,” Nancy says. “That’s why I compared Tiger Woods to her. Annie was probably the very first superstar, someone who outshined everyone with her skills.”

A significant part of the DVD is the short film Thomas Edison made to showcase Annie’s shooting skills. Edison was fascinated with her and was especially interested in seeing if his camera could follow the course of the bullets.

Annie was devastated by the death of her beloved dog Dave, who was buried in a remote area in Leesburg. Nancy was able to talk with Eloise Pemble Morris, who was 12 years old when she attended the funeral for the pet. Eloise said she was excited to attend a funeral for a dog because she’d never done that before.

“Eloise said she had no idea who Annie Oakley was at the time, she just knew the lady as Mrs. Butler,” Nancy says. “I worked for hours restoring the photos from the funeral so the quality was good enough to distinguish who was is in them.”