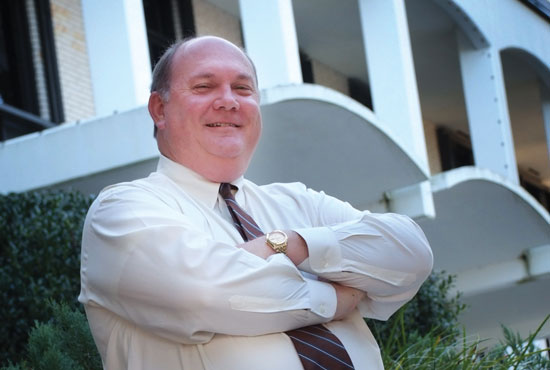 Ricky Horst doesn’t plan to manage Ocala from behind his desk in City Hall. A day into his new position as city manager, Horst’s full calendar had him making the rounds, shaking hands, and introducing himself without even the benefit of a business card. He hit the ground running so quickly that his on-order business cards hadn’t yet arrived.

“Of course, I understand that the job does require some office time,” says Horst who at 50 has spent more than half his life in public service. “But what I do best is solve problems and to do that I have to get out in the city. I have to be in touch with the city’s employees and the community. That’s the only way I’ll really know what’s going on.”

And when he is in the office, expect the door to be open to all. That accessibility ties into Horst’s belief that “local government is the purest form of government for the people.” His resume provides the substance behind the quote.

Horst’s involvement in municipal government includes stints as a parks and recreation director, public utilities director, economic development consultant, and city manager. The last 10 years, Horst has been plying his profession in Utah—city manager for two years in Santa Clara and the past eight in South Jordan.

Under Horst’s guidance, South Jordan was recognized as one of the fastest-growing cities in Utah with double-digit growth per year during his tenure. A key facet of that growth was Daybreak, a 5,000-acre planned community that garnered South Jordan national recognition in TIME and BIG BUILDER magazines.

“I was very impressed by Ricky Horst and what he accomplished during his time in South Jordan,” says Rich. “He believes in economic development, which was very evident by what I saw. He also knows that he can’t do it all alone, so he listens to his staff and the community. I know he’ll do a great job here in Ocala.”

Horst, whose size makes you think he was a football lineman rather than the trombone player he was in high school and college, says “it was time for a new challenge.”

He was a finalist for the city manager’s position in Fort Smith, Arkansas, as well as the Missouri cities of Springfield and Lee Summit. But once he interviewed for the spot in Ocala, Horst withdrew his name from consideration in the other cities.

“I’m a Florida boy,” admits the Crestview native. “As much as I loved living in Utah, I missed the ocean, the beach, and the green forests. And one visit to Ocala had me convinced that this is where I wanted to be, both professionally and personally.”

The Ocala that Horst visited was different than the one he remembered as a boy stopping in “for a bag of oranges and a box of divinity candy at the Stuckey’s on the way to South Florida for vacation.”

“During my interview visit, I realized that Ocala had changed tremendously,” he says. “Ocala is a great city to live in, and it’s poised for an even brighter future. The trick is to grow into that future and still retain what makes Ocala unique. I believe we can do it.”

Horst ticks off some of the positives that the city has going for it: north central location in the state, available reasonably-priced land, and most importantly, com-munity-minded, hardworking people.

“The people of Ocala are what impressed me the most and finalized my decision to come here,” says Horst. “A city ultimately is a reflection of its people, and I like what I see in Ocala and what I can foresee.”

While believing that a city manager must allow for flexibility in planning, Horst already has a basic agenda of moving Ocala closer to that foreseeable future.

“Diversifying the economic base is critical,” he says. “I believe the city can and should be a stronger partner with the Economic Development Council. I love Ocala’s downtown area and think it’s something we have to do more with it. The core of a city is its heartbeat and if you lose that, you see a city deteriorating from the inside outward. I don’t see the people of Ocala letting that happen.”

Horst isn’t planning on that happening either.

“A city has to connect with people, with their emotions,” he says. “And to do that, we have to build places worthy of our affection.”