Live in Florida long enough and you’ll hear the term “Cracker.” Depending on who says it, calling someone a “Cracker” can be either derogatory or a respectful acknowledgment of heritage. If someone refers to himself or herself as a Cracker, they’re letting you know in one simple word that their claim on Florida is generations old—and they’re darn proud of it. 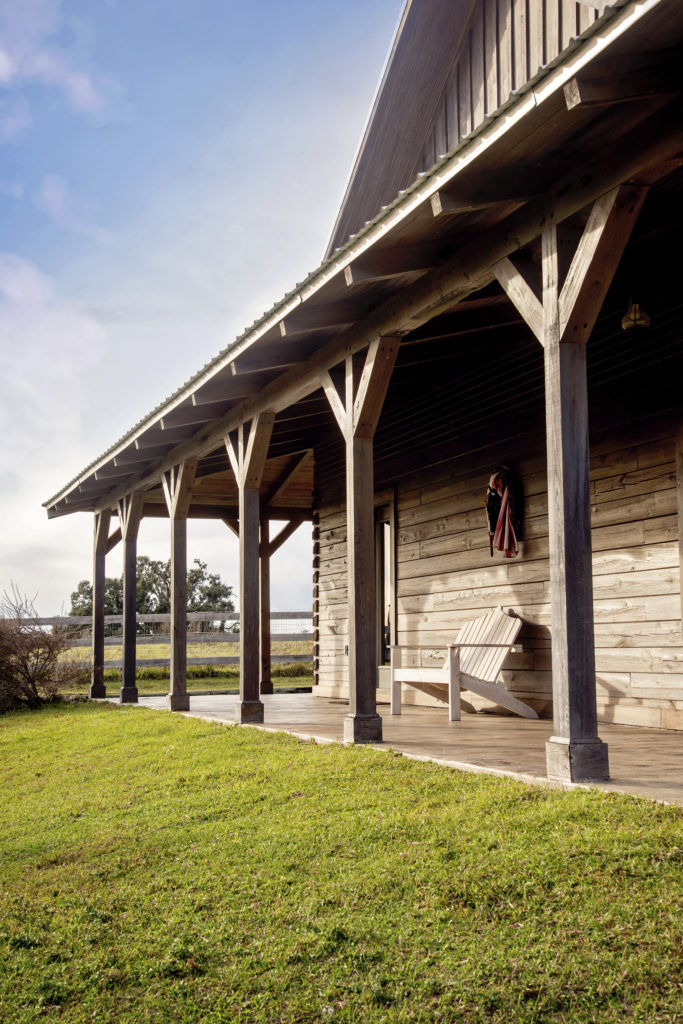 Although there are a few theories about the origins of the word, many old-time Floridians believe it traces directly back to the state’s earliest years. Spanish explorers brought the first cattle to our shores in 1521, and they turned into massive wild herds over the centuries. Native Seminole people ran large herds of cattle numbering in the thousands.

As more and more white pioneers found their way to the territory that would become known as Florida, some of them took advantage of those cattle and rounded them up to sell. They helped supply the Confederate Army with beef during the Civil War and also shipped cattle to Cuba.

No matter how talented a man was with a rope, when those wild cattle headed into thick scrub, swamps and heavily wooded areas, roping them was impossible. So these scrappy “cow hunters,” mounted on equally tough little horses, drove the cattle out using dogs and long, braided whips. The distinctive cracking sound of those whips led to the term “Cracker,” and it stuck. (For the record, some modern Florida cowboys are fine hands with a whip and still use them when moving cattle.)

As these cattlemen and other pioneers settled Florida’s wild and challenging country, they turned to the land to supply what they needed to build homes as quickly and efficiently as possible. 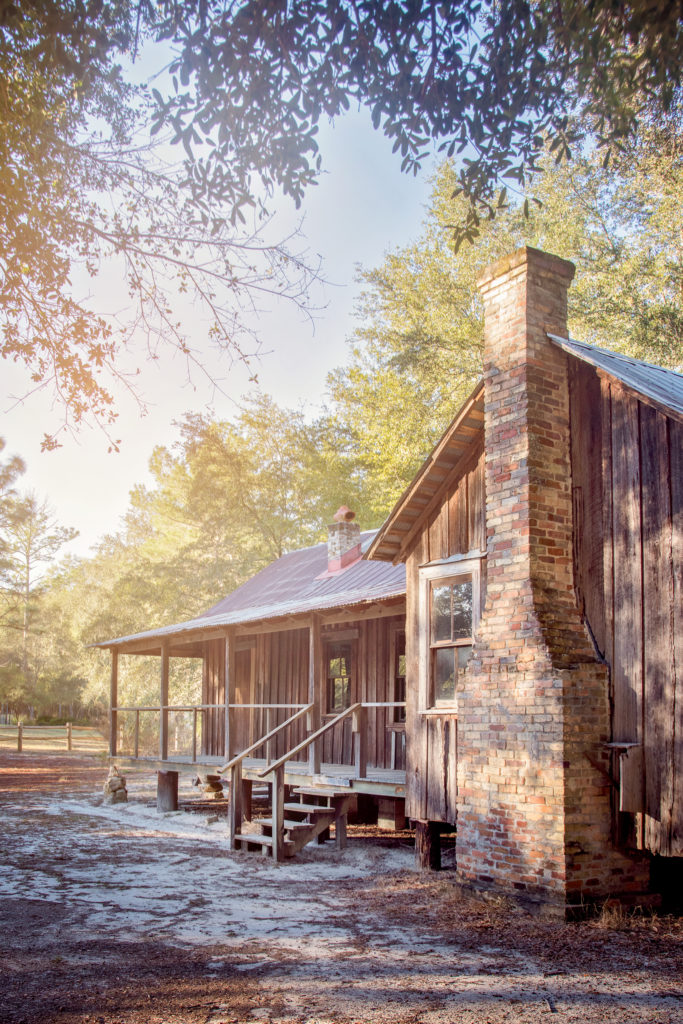 Large windows could be opened throughout the house, while a cupola and/or clerestory was sometimes included, not for looks, but to provide an escape for rising warm air and to help cool the interior. For safety’s sake and to spare the living area from the heat of cooking, the kitchen was typically built as a smaller separate structure behind the main house.

Cracker homesteads evolved over time as homeowners expanded on the original structure, which was typically a “single-pen” house consisting of one square room with a fireplace and a chimney, all surrounded by wide, covered porches. As the family grew—and funds allowed—the home was added onto. There were different ways of doing this. 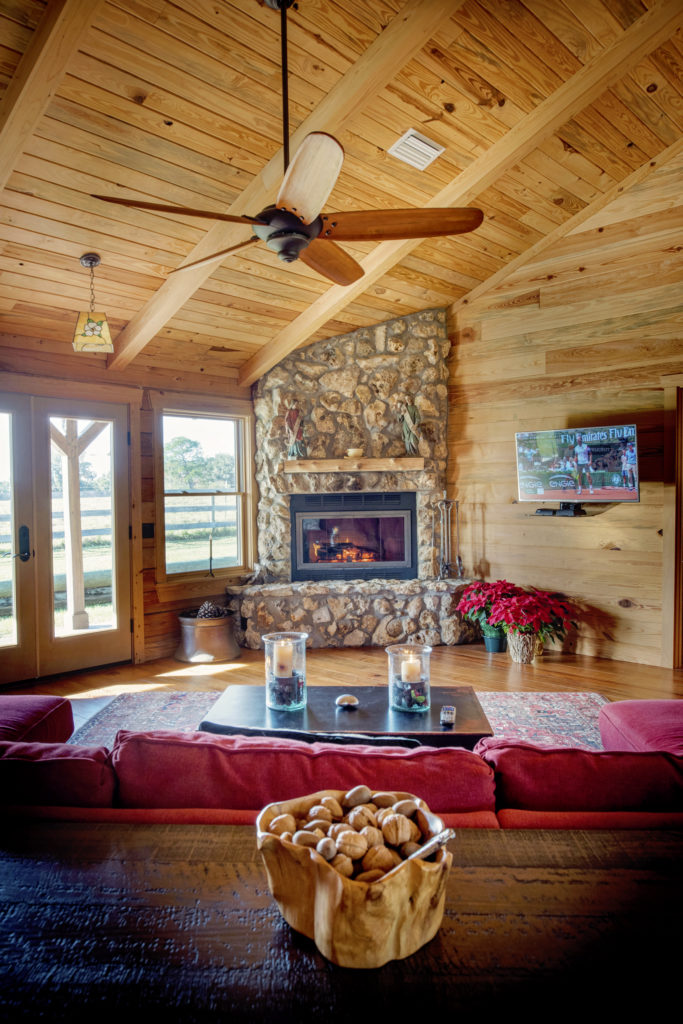 The “dog-trot” was the easiest of the three, as it required no alterations to the existing structure, so it was commonly used, and many people consider this style typical of early Florida Cracker-style homes.

Florida’s pioneers were all about practicality when building their homes. Today, that Cracker style is popular for energy efficiency, comfort and aesthetics. Contractors are building both log and frame Cracker-style homes in an array of sizes.

Not all are built with the classic elevated foundation. Some homeowners choose to have their house built on a concrete slab, but either way, there are several design features that proudly proclaim “Cracker.”

“A total wrap-around porch is one the big elements of Cracker style,” says builder Jeff Gutapfel, owner of Good Apple Development Corporation in Ocala. “One of the benefits of having it around all four sides is that it keeps the sun off the walls of the house, and that helps from an energy performance standpoint. Another benefit is that it also keeps the weather off the walls; these homes will last hundreds of years so long as the roofs are maintained.”

Metal roofs—a classic Cracker-style feature—come in a variety of colors, and Jeff points out that the color you choose influences what builders call “solar heat gain,” referring to the increase in thermal energy as the structure absorbs heat from the sun.

“Darker colors absorb the heat, which transfers into the attic of the house,” says Jeff. “A white metal roof is significantly cooler because it has the highest reflectivity and the lowest solar heat gain. That’s why white is the best way to go for energy efficiency.”

Those early Florida pioneers didn’t have spray-in insulation, but Jeff has found this is a definite benefit when used under the roof, as it makes the home much easier to cool and heat.

The original settlers went with a peaked roof and high ceilings because as heat rises, the floor area would stay cooler, but today’s homeowners appreciate this feature for its dramatic look as much as for its practicality. 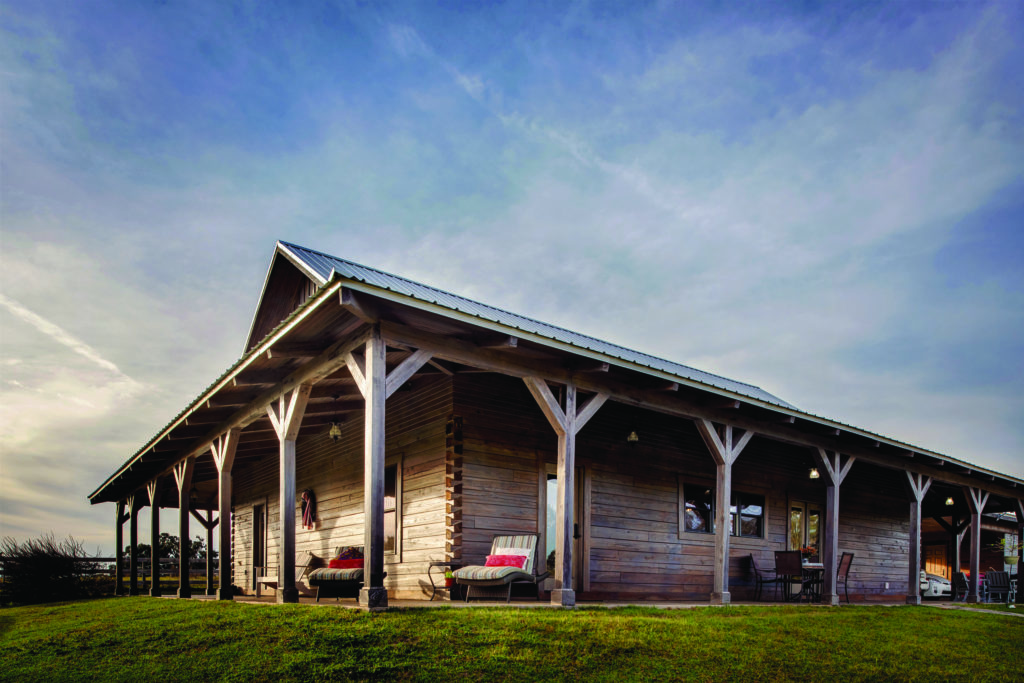 “We overbuild the floor system so it’s very solid and put the logs (walls) on top of that. We insulate with R19 under the floor and can also use spray-in insulation after the plumbing goes in, so the pipes
are insulated, too,” notes Jeff.

In pioneer days, that elevated construction increased ventilation and also made for a cool spot for dogs and chickens to hang out. Modern homeowners appreciate the fact that it provides easy access to plumbing and other mechanical systems.

One early concept that today’s homeowners prefer to skip is leaving cracks in the wood floor to help with “house cleaning.”

After living in Dunnellon for nearly 30 years, Klaus and Marilyn Gruber had the opportunity to sell their house and fulfill Klaus’ dream of living in a Cracker-style log cabin. They found the exact look they wanted after visiting Cracker Style Log Homes and Sawmill in Williston, Florida, a locally owned and operated business that sells log home packages, plans, lumber and flooring.

The Grubers bought a 5-acre parcel of land in the Morriston area and hired Good Apple Development to build their dream house in 2015.

The 1,728-square-foot home was built on a concrete slab instead of elevated.

“We’re already on a hill and didn’t feel the need for extra elevation, and it was more practical financially,” notes Klaus. “We always seem to have a breeze, even during the summer, so it’s very energy efficient.” 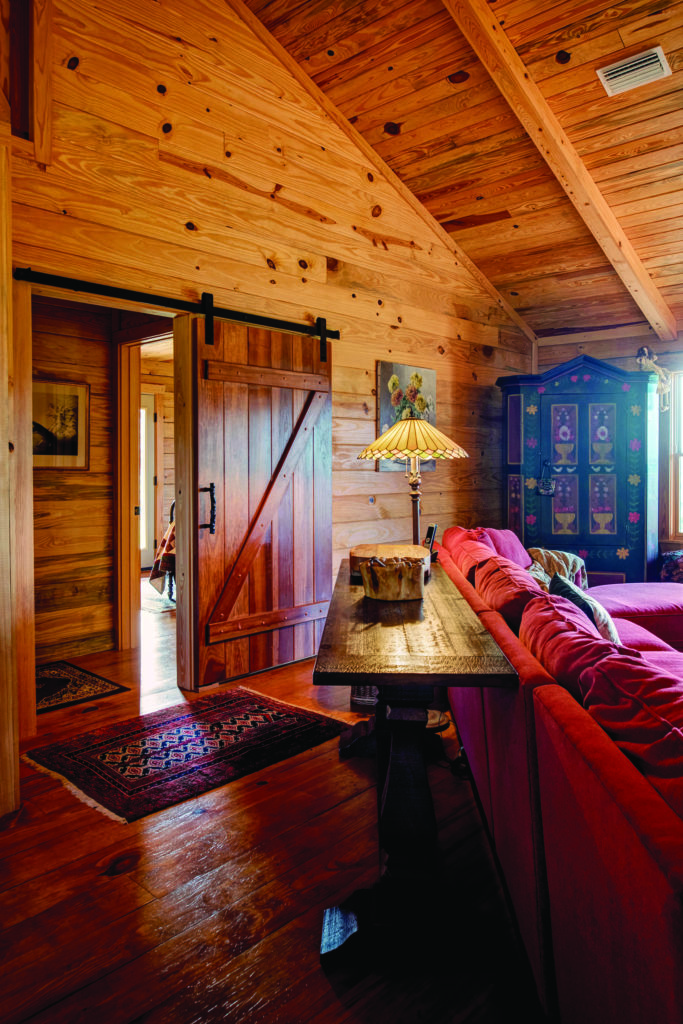 A galvanized metal roof reflects the sun and helps keep the home cool. True to early Cracker design, the home has a complete wrap-around porch, which doubles the living space. The spacious, breezy porch is the perfect place to sit in a comfy chair and enjoy the serenity of surrounding pastures and hay fields.

“Our sunrises and sunsets are magnificent with the views we have,” says Marilyn. “We practically live on the porch; we can be out there no matter what the weather.”

Inside the living room with its soaring peaked roof, a native stone fireplace commands attention. Klaus handpicked each of the rocks, many of which contain fossils.

The three-bedroom, two-bath home doesn’t have an inch of drywall. Just like an original Cracker-style pioneer home, every wall is made of logs, and the heart pine floors have plenty of knots and color variations.

“I can’t think of one thing we would do differently; we’ve got everything here we wanted,” says Klaus. “We’ve lived in nice homes on Blue Cove and Rush Lake; this
is the best place we’ve ever lived.”

A fourth generation Florida native who proudly calls himself a “Cracker,” Don Sparkman grew up on a hog farm in Dunnellon where he was raised in an old Cracker home.

“It was easy to heat and cool because it was built to catch the breezes, and the morning sun would heat it,” recalls Don. “The windows were tall and wide, about

6 feet, so with all of them open, it would pull a draft of air in to cool the house. Most Cracker houses had a back porch; the (farm) workers could come in that way and clean up in the kitchen at the back of the house, while the front porch was for entertaining.”

In 1996, Don built his own Cracker-style house in Ocala.

“I took the memories of growing up in a Florida Cracker home and added modern conveniences to it,” says Don.

Don and his wife, Debbie, went
with frame construction and the classic peaked metal roof and opted for more of a “plantation look,” complete with big columns in the front of the house. Instead of a wrap-around porch, they built a large front porch. Including the spacious porch, the house is 6,000 square feet. A large attic fan increases ventilation and aids in cooling.

Because the Sparkmans’ home was built with a stem wall on the slope of a hill, Don was able to give the structure something rare in Florida construction: a basement.

Complete with 12-foot ceilings, two fireplaces outfitted with Florida yellow pine mantles and hardwood floors throughout, the Sparkmans’ home is definitely larger and fancier than Don’s childhood home,
but it incorporates all the practical elements he’s long respected. It’s rich in heritage and history, underscoring the very best of Florida Cracker style.

Classic Cracker (Pineapple Press), written by Ronald W. Haase, is a detailed account of the author’s research on these early pioneer homes. Haase, who moved from New Hampshire in the 1980s to take a job as a professor of architecture at the University of Florida, has been influential in spreading the word and helping preserve the state’s early Cracker homes. › crackerstyleloghomes.com

Silver Springs State Park in Ocala has 10 Cracker-style cabins available for rent in their campground area. Although the cabins were built in 2000 and 2001, they have a rustic appearance, right down to the metal roofs, knotty pine walls and screened-in wrap-around porches. All but two are elevated; Cabin 5 has a ramp, and Cabin 6 is wheelchair accessible. 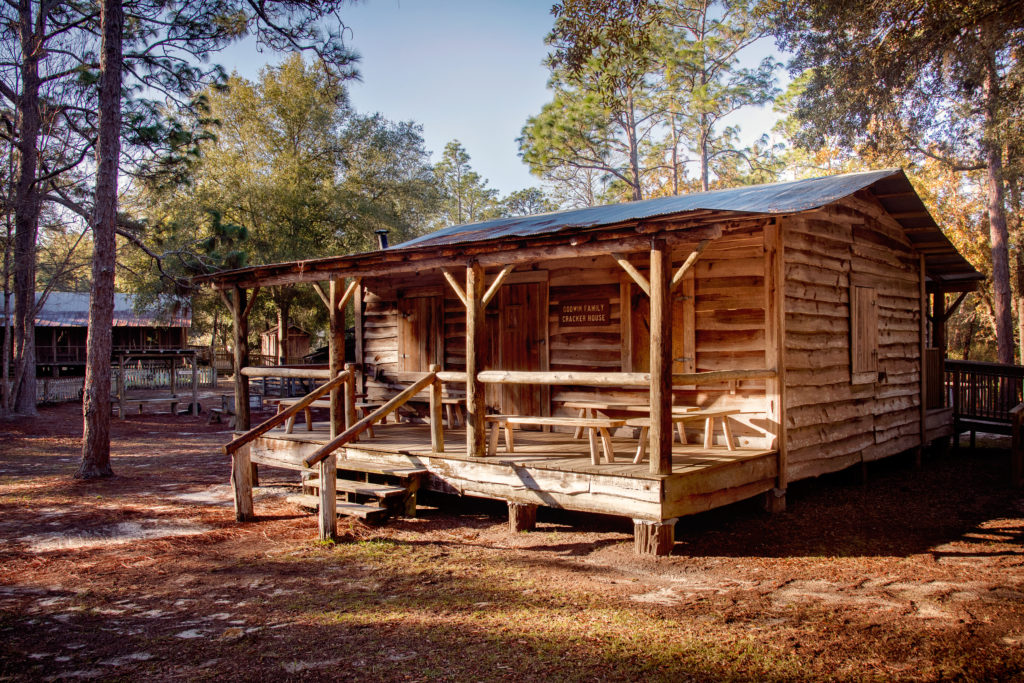 All cabins are two-bedroom, one-bath and sleep a maximum of six guests. There’s no television, but you’ll have a fully outfitted kitchen complete with dishwasher and microwave.