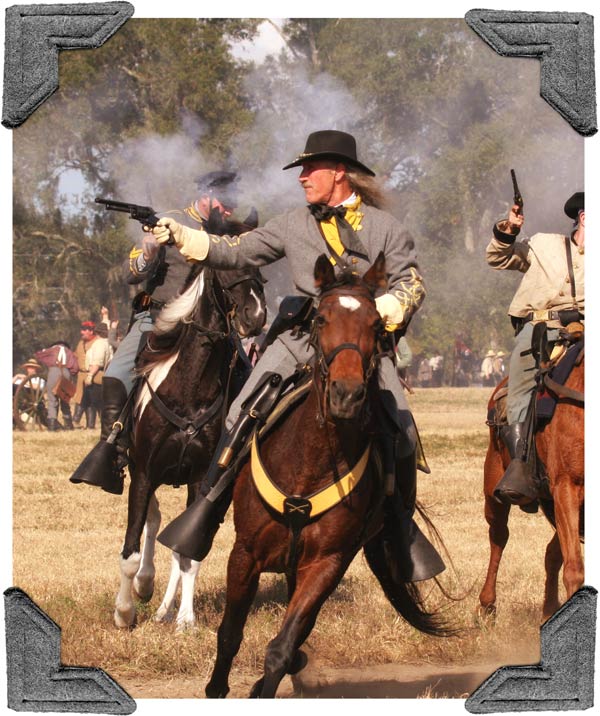 While archaeologists and history professors dig up the past, living history interpreters breathe life into it. They’ll be a main attraction at the annual Ocklawaha River Raid and Ocali Country Days events in November. Meet two historians who are ready to take you back a couple centuries into Marion County’s past. 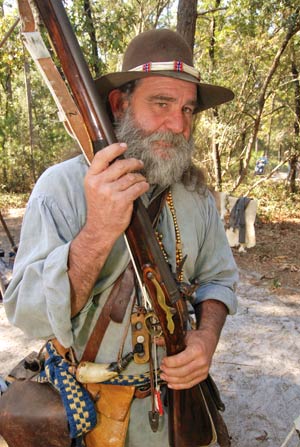 An afternoon of storytelling creates a time warp for people who meet Robert Wilson. A rugged outdoorsman with a graying beard that cascades to his chest, Robert looks every bit the backwoods trapper that he talks about in his living history interpretations.

A traveling gunsmith by trade, Robert says if he had lived a hundred or more years ago, he would have wanted to be an early American trapper. So, using his middle name, Munroe, he developed a character that is basically a composite of his Kentucky-bred grandfather and a real-life Florida trapper named William G. Dawson.

Robert first met Dawson while reading a history book about Fort McCoy. Here was a bona fide early American trapper who trudged through the swamps and brush along the Ocklawaha, snaring small animals such as beaver, wild boar, and possum, and occasionally lifting a musket and taking a shot at a bear or a deer. Then, there were the trips to the landing at Orange Springs where Dawson once sold his hides.

Robert started doing living history interpretations eight years ago. Clothed in buckskin and wearing a felt hat made from the short hairs of a beaver’s coat, he greets visitors to his camp along with his cattle dog, a red heeler named G.B., which stands for “gator bait.”

At Ocali Country Days, Robert opens the pages of history from inside a shelter of canvas and sticks, similar to the kind of humble home where Dawson might have lived.

“When you come into my camp, I try to let you know what it was like to live back then,” he says. “I even stay in camp all night. When I started out, it was just a blanket on the ground. Now I’ve got a little padding. That’s the way I’d love to live.”

Keeping with the spirit of that era, Robert strings animal hides on a line and sets out an array of tradable items, such as beaded moccasins, leather goods, and bricks of tea.

“They didn’t sell it in Lipton bags back then,” he says, his brown eyes crinkling. “It came in a block and you had to shave off what you needed.”

As he interacts with visitors, Robert talks about the men who cut down cedar trees and floated the logs down the river to sell. There were other professions, too, he says—blacksmiths, coopers, and traders—but the people who fascinate Robert most are the trappers, a nomadic bunch that lived in makeshift shelters, traveled in groups for safety, and either cut and smoked the meat or took it to the nearest settlement to trade.

“You were kind of a walking supermarket,” says Robert, a hint of awe in his voice.

Robert’s trips back in time are somewhat a reflection of his own life. Now 50, he’s felt the call of the outdoors since early childhood.

“I grew up on scrambled eggs and hog brains,” says Robert, who was raised on a 100-acre farm near Pompano. “I never wanted to stay in the house as a kid. I caught a lot of animals by hand, snakes mainly. When I got out of high school, the first thing I did was get a license to catch rattlesnakes and moccasins. It really gets your adrenaline going.”

These days, Robert sets up camp at 16 events every year in Florida’s state parks, and Silver River is one of his favorites.

“They have the utmost setting,” says Robert. “With the museum and the Cracker village, you can do a whole walk through time there. You can go from the 1600s all the way past the Civil War and into the ’30s and ’40s when Silver Springs became an attraction.”

Some visitors, he adds, can’t seem to get enough.

“We’ve got people who come back and hang around all day.” 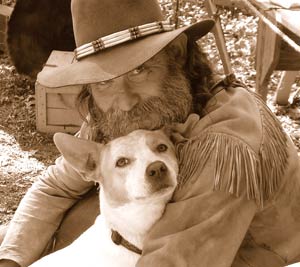 Keith Kohl’s transformation begins when he slips into his gray, wool shell jacket, high leather boots, and kepi cap. Add a revolver and a foot officer’s sword, and the deputy registrar for the Marion County Health Department becomes Lieutenant Colonel Keith Kohl, a Confederate soldier in the 2nd Battalion of Hardy’s Brigade.

The organizer of the Ocklawaha River Raid has been a reenactor since he was 14. He first organized the local Civil War reenactment when he was 17.

“My parents took my brother and me to a historic site when we were boys,” Keith recalls. “They had us all over the Eastern Seaboard to historic sites.”

At one time, Keith’s entire family, including his grandmother, was involved in reenacting. These days, Keith is the only member of his family who continues to perform, but what else can you expect from someone who’s stuck in the past?

“I was already a history buff,” says Keith. “Here I was at 14 and reenacting drew me. It involved my love of history and camping in the outdoors, all in one package. Now, 26 years later, I’m at it more than ever. I’ve been doing this so long it’s become an extension of myself.”

In March, Keith met the woman who would become his wife, where else but at a Civil War reenactment near St. Cloud. Amanda and her son, William, both civilian reenactors, also will take part in the Ocklawaha River Raid.

The way Keith tells the history, the Ocklawaha River raid began when a company of black Union soldiers left their Jacksonville garrison, came here, and destroyed Marshall’s Plantation. It was essentially a supply raid that also involved the freeing of slaves.

When the Union soldiers left the area, a home guard militia pursued them, killing two Union soldiers and losing a couple of their own troops. That first skirmish took place near the present-day Sharpe’s Ferry Bridge, where Highway 314 crosses the Ocklawaha River.

To stop their pursuers, the Union soldiers burned the original bridge. As they got closer to home, however, a Confederate cavalry caught up with them. The Union troops abandoned the property they had taken and escaped into St. Augustine.

The two-day Civil War reenactment draws participants from all over Florida. The 2nd Battalion of Hardy’s Brigade, which is headquartered in Ocala, has 75 soldiers and 75 civilian members from across the state. The soldiers fill parts on each side of the battle. Sometimes, when one side is short of men, those who have both uniforms simply change clothes and switch sides.

“It’s what some of us call galvanizing,” says Keith. “It’s better for the reenactment because then the crowd doesn’t see 100 soldiers battling 25. I run back to my tent, change my uniform, and march over to the Union side. It’s one way of honoring those men that fought this war.”

After years of research, Keith says this is a way to share with the public what he’s learned about Marion County’s past. For the reenactments, he spends long hours considering the lay of the land, the number of participants, and the battle details. But it’s all worth it, he says.

“It’s our way to keep this history alive, by giving it living, breathing life,” Keith says. “Once I put that uniform on, I try to leave the 21st century behind and, for the weekend, step back into the 1860s.”