In between busy days in the courtroom as a personal injury attorney, Marianne Howanitz dedicates her time to the Western discipline of reining. Last year, her focus paid off when she and “Stingray Whiz” took home the NRHA Rookie of the Year title.

When Marianne Howanitz took home the National Reining Horse Rookie of the Year title in Oklahoma City in December of last year, the accolade capped off a lifetime spent in the saddle. A native Floridian, Howanitz first started riding at age six. She began dressage lessons at eight, had her first horse by 10, and started showing hunter-jumpers at 14. Horses have always been a passion for the Ocala attorney. Stingray Whiz, the Quarter Horse gelding on which she won the rookie title, was bred and trained by Howanitz’s husband, Buddy. She also had the help of Ocala trainer Mark Rafacz, who Howanitz affectionately refers to as “The Rookie Maker.”

“I started showing Stingray for the first time in March, and we did well. In August, we decided to go for the Rookie of the Year title,” she recalls. “At the championships, it was nerve-racking because I drew 14th and ran a nice pattern but then had to wait another four hours for 36 horses to try to beat my score.”

Howanitz celebrates her win with husband Buddy (l) and friends. 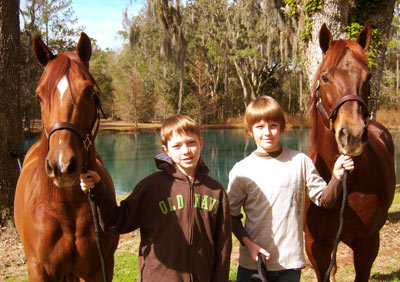 The Western discipline of reining, much like English dressage, involves intricate patterns of circles, stops, and spins completed at different rates of speed. Judging is based on the suppleness of the horse’s movements and the effortlessness of communication between horse and rider.

“We planned our work and worked our plan,” she says with a smile. “Like preparing multiple cases for trial, you have to schedule your time and your activities flawlessly. We mapped out the show schedule and trained so that we would peak at those shows accordingly. Even though I was busy with trial work and being a wife and mother, I still managed to find time to ride several times a week.”

Never one to rest on her laurels, Howanitz plans on showing a half-sister to Stingray Whiz next year.

Howanitz’s day job as a personal injury attorney keeps her extremely busy, from meeting with accident victims and their families to pursuing justice for her clients all the way to the courtroom if necessary. With a no-recovery, no-fee philosophy, her law firm, Marianne Howanitz, PA, limits its practice exclusively to vehicular and pedestrian accidents, defective product, premises liability, and wrongful death claims. With every new client, Howanitz personally handles the case from initial consultation to final disposition, rather than handing the work over to caseworkers or investigators.

A 1991 graduate of Florida State University’s College of Law, Howanitz gained invaluable trial experience while working as an Assistant Public Defender in South Florida after law school. Then, she continued her career as defense counsel for State Farm Insurance Company and later as lead trial counsel at an Ocala law firm after moving to Marion County in 2003.

No stranger to the courtroom, Howanitz was named by fellow Florida attorneys to Florida Trend magazine’s“Florida’s Legal Elite” in 2009. This list of 918 attorneys represents less than two percent of the nearly 63,000 Florida Bar members practicing in the state. Howanitz, who describes her passion for championing clients’ cases as a calling, recently opened her own law practice to ensure her close, personal involvement in each and every case.

Howanitz recently launched a new website—www.ocalaaccidentlaw.com—which is an important resource for those who have suffered an accident or injury. The site offers information on commonly asked questions like what to do after an accident or when speaking to an insurance company. By making this information available to the public, Howanitz hopes people will not make common mistakes that could affect their cases. The website also features a section with research links to federal, state, local, and medical information. Statistics on Florida injuries are also available and updated regularly.

In addition to her busy workload, Howanitz is also a tireless supporter of Take Stock in Children, where she has mentored for the past six years, as well as the Marion County Youth Football League. Naturally, however, her favorite pastime remains spending time with Buddy and their twin 12-year-old sons, Jesse and Cole—especially when it involves riding their horses together.