Everybody loves all the chain restaurants on SR 200, but the best food—and usually all the familiar faces—can be found at the spots a little off the beaten path. These seven restaurants are where the locals eat, where the food is comforting, and—if you go often enough—where everybody knows your name. 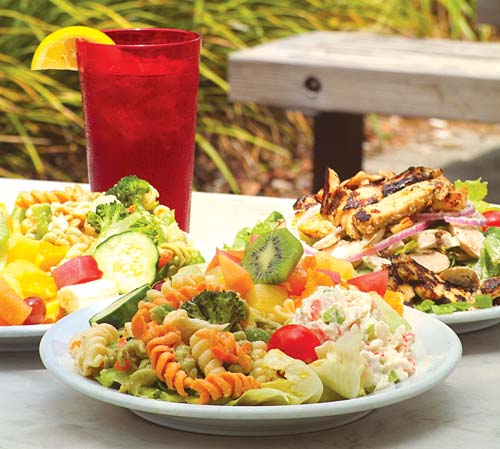 Wayne’s Brick City Café has been a favorite location for breakfast or lunch in downtown Ocala for 19 years. Owner Wayne Langler can be found behind the kitchen counter every day.

When the weather’s agreeable, customers often like to eat on the patio. But while the weather can change, certain things on the menu do not.

Hands down, the Salad Plate is the most popular menu item. It includes a choice of two side salads (potato, coleslaw, fruit, or pasta) and choice of one main salad (crab, chicken, or summer salad). My personal favorite combination is pasta, fruit, and crab, but the myriad combinations make this dish a big seller.

“If I tried to take this off the menu, they’d probably hang me,” Wayne chuckles. “I’ve had it on the menu ever since I opened in 1989.”

Quiche of the Day is another customer favorite and is served with soup or salad. The Brick City Burger, one-third pound of Angus beef, is also popular. If you like it with cheese, go for Swiss.

“I’ve been coming here as long as they’ve been open,” says Ed McClellan, a trial attorney who frequents Brick City Café for lunch as often as three and four times a week. “The people are nice, the food’s good and quick, and it’s a convenient location.” 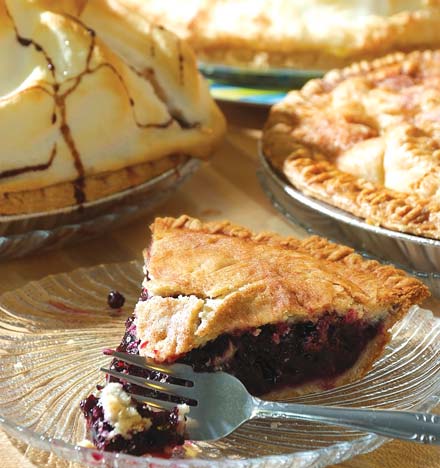 Southern Living doesn’t give its stamp of approval to just any restaurant. So when the magazine recognized the Front Porch Restaurant & Pie Shop as a favorite place for pie, this was high praise.

Stan and Mary Scally have owned the restaurant since 1986. Between them and their eight children, the business has stayed in the family. Daughters Kathy and Debra manage the Front Porch, but you can usually find Stan and Mary there, too, along with Gail, who makes 25 to 50 pies per day. Around Thanksgiving, Kathy and Debra pitch in and the three women turn out over 300 pies in barely three days.

Whether you come for breakfast, lunch, or dinner, you must order pie. Don’t wait, though, because best sellers like their phenomenal lemon meringue sell fast.

Of course, this is easier said than done.

The Southern Style Pot Roast is a huge seller, and one bite of the falling-apart-tender meat smothered in rich gravy explains why. (“I’d drive all the way here just for the pot roast,” whispered my companion between bites.) The country vegetable sides are just like Sunday dinner at Grandma’s.

Noting the abundance of fish entrées at surrounding tables, we also ordered the tilapia. Available fried or boiled, we tried it both ways and quickly realized why it’s so popular.

“The tilapia’s great and the pies can’t be beat,” says Patti Purvis, a patron who has been coming to the Front Porch for 20 years.

Ah, yes, the pies. I opted for the coconut cream with its perfect crown of meringue, but depending on when you visit, there may also be banana cream, sweet potato, pecan, key lime, chocolate cream, peanut butter chocolate, or several fruit pies. 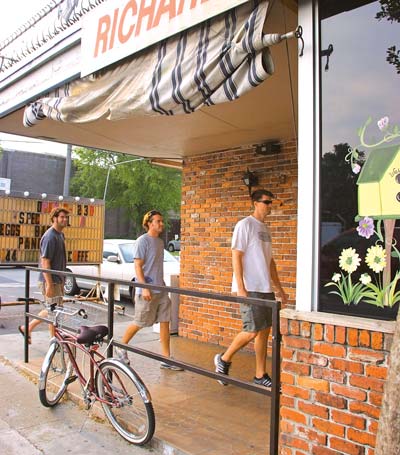 During busy weekends, some 500 diners come through the doors at
Richard’s Place for breakfast and lunch.

When Richard Lee opened Richard’s Place in 1983, he couldn’t know the little restaurant at the corner of Watula and Silver Springs would become an Ocala icon.

After Richard passed away in July 2006, having waged a noble battle against pancreatic cancer, his wife, Fran Lee, and daughter, Diane Alonso, were determined to continue the tradition of Richard’s Place.

Known for its all-day breakfast, Tennessee ham, and homemade biscuits and gravy, Richard’s features simple country fare made from scratch. The Lite Breakfast is one of Richard’s most popular entrées. Customers appreciate that they get a little of everything (egg, sausage or bacon, potatoes or grits, biscuit or toast), and that it comes with coffee or tea.

“We’re here five to six mornings a week and usually get the special, that’s the best deal,” says Judy Griffin, sipping a cup of coffee with husband Bob. “It’s like a family here. We come for the people as much as the food. And we sure miss Richard.”

Barbara and Russell Leary have been customers for 18 years. The fact that they come for breakfast seven days a week makes them very regular customers.

For Diane, who began working with her father in the restaurant business when she was just 12, Richard’s Place is a way of life.

“We always say if you can’t find your friends at home,” she laughs, “they’re probably at Richard’s.” 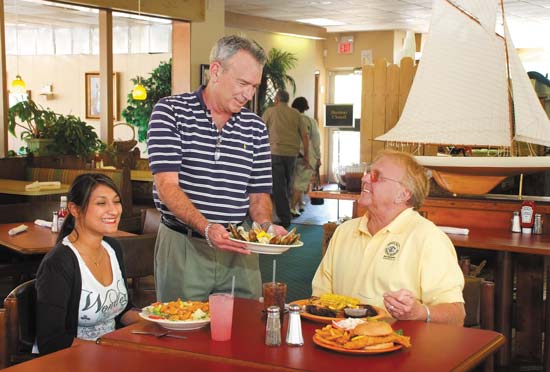 For years, Huck Finn’s restaurant had a large following, thanks to its home cooking, friendly service, and convenient location west of I-75. When the business changed hands earlier this year, customers were thrilled to discover that while the name became Town & Country Diner, the important things remained the same.

“The wait staff remember you and what you like,” says regular customer Jack Dudley II, who usually eats at Town & Country twice a week with his family. “You see people you know.”

“The service is good and the people are friendly. We love our server, Suzanne,” adds Nancy Sharp, who with husband Jim comes in most Sundays after church.

The restaurant is a favorite breakfast spot and with good reason. French toast may be the original breakfast comfort food and Town & Country serves it perfectly—thickly sliced with just the right mix of cinnamon. Those hunting for a bit more protein to start the day will be more than satisfied with the variety of omelets on the menu. The “Wyatt Earp” is stuffed to overflowing with ham, bacon, veggies, and pepper jack cheese.

For lunch or dinner, if Ocala has a better fish sandwich, I don’t know where to find it. You can get it grilled or blackened, but fried is the way to go. Because of the ever-so-light breading, all you taste is fish. It comes with a pickle, coleslaw, and a side, but the sandwich is so generously sized, you may not be able to finish the rest.

For dessert lovers, the key lime pie with ice cream is a fabulous finish. I’d never have thought of putting the two together, but on a customer’s recommendation (thanks, Jessi Dudley), I now understand her rave review. 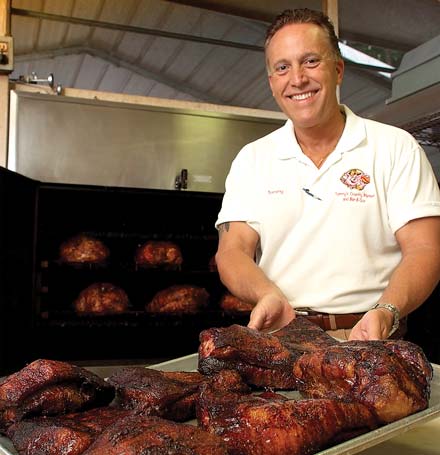 Given the abundance of trucks and work vehicles in the parking lot every day, I knew this was a place where portions would be substantial and satisfying.

Why? Owner Tommy Phillips’ philosophy is simple—good barbecue is all about flavor. His down-home country restaurant was formerly a meat market where customers came to buy hard-carved cuts of choice meat, but Tommy wanted to create a spot where working people could come for a great meal and meet their friends.

“We’re really a country food restaurant,” notes Tommy, “but barbecue is our claim.”

“I like the good country atmosphere, especially the quail and rabbit specials,” says customer Haynes Moody, who visits Tommy’s BBQ once or twice a week.

There’s always a daily special, such as the hearty chicken and dumplings on Mondays, but you can’t miss with Tommy’s Signature Gold Pork sandwich. Served on Ciabatta bread, the tender, flavorful pork takes its golden color from the mustard-based barbecue sauce. You can pick from a number of daily country vegetable sides and salads, but don’t skip the awesome baked beans.

Tommy smokes beef, pork ribs, chicken, and turkey for his sandwiches and plates. And if you can’t pick just one meat, the combo plate provides two.

Your meal’s not complete without a dish of homemade banana pudding. This longtime favorite is nothing short of divine if you can get there when it’s still warm. 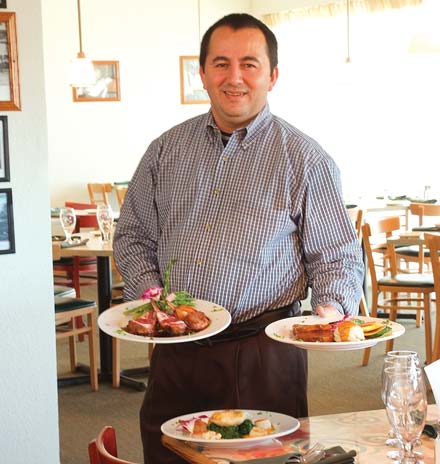 Ocalans who once frequented Carmichael’s have found a new home at
José Moreno’s Uptown Grille.

A restaurant has been at this location for more than 50 years. The eatery became Uptown Grill several years ago and owner/chef Jose Moreno took over the reins early last fall.

If some of the menu items at Uptown Grill taste familiar, you’re not imagining things. Moreno spent years as the chef at Carmichael’s. With the blessing of Ken DePasquale, who owned that much-loved Ocala establishment, Moreno’s continuing some of those favorite recipes. Customers couldn’t be more pleased.

“We love the chicken pot pie and the tilapia special, and they also have good wine,” adds Dolores Taylor, who frequents the restaurant with husband David. “If you want something special, Jose will fix it for you.”

Serving breakfast, lunch, and dinner seven days a week, Uptown Grill features specials for every meal. Fortunately, the homemade chicken pot pie is always on the menu. This signature dish features savory chicken and vegetable filling topped with a light, flaky puff pastry baked until golden brown. Once finished, you’ll be scraping the bottom of the dish.

The $9.99 Sunset Dinners are extremely popular and patrons of Ocala Civic Theatre find this an ideal spot to catch dinner before a show.

Save room for dessert because the flan is sweet perfection. Add a cup of espresso or cappuccino for an idyllic ending to your meal.

“People tell me, ‘We feel like Carmichael’s is back!’” says Jose. “Nobody can replace it, but I’m trying to bring the good memories of Carmichael’s back to the Boulevard.” 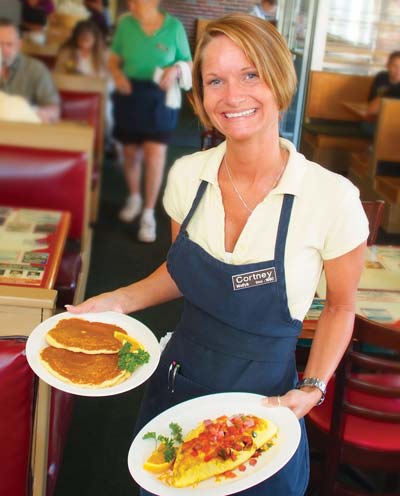 Owned and operated by the Wolf family since 1983, Wolfy’s (owner John Wolf’s nickname) has a core staff that has worked at the restaurant for many years. Those employees are one of the reasons customers come back again and again, some eating at the restaurant twice a day.

“I like being on a first-name basis. The people who work here are awesome,” says Scottie Lowe, a local business owner who has been eating at Wolfy’s for 20 years, often three times a week. “It’s kind of like eating at Mom’s house.”

Customers love the fact that breakfast is featured all day. Wolfy’s will serve some 90 dozen eggs on a single Saturday breakfast. As Wolf says, “That’s a lot of eggs!”

Wolfy’s is known for breakfast and customers claim it has the best pancakes in town. But if you come for lunch or dinner, try the roasted chicken, a favorite complete with choice of potato and vegetable. Dinners include garlic toast, biscuit, or corn muffin, but this shouldn’t even be an option. Ask for the corn muffin and you’ll never be sorry. It’s tender, just slightly sweet, and served with real butter.

Wendy Wolf’s homemade desserts have quite a reputation. If you happen to stop in when her chocolate cake is available, consider your day complete. Moist and rich, it’s generously topped with fluffy white icing. As one customer confided, “One bite and you’re hooked.”

“This is comfort food,” says Wolf, “no question about it.”

What About Your Favorite?
Please let us know your favorite locally owned restaurants and what makes them special to you. Just drop us an e-mail at dean@ocalastyle.com and put “Local Flavor” in the subject line.