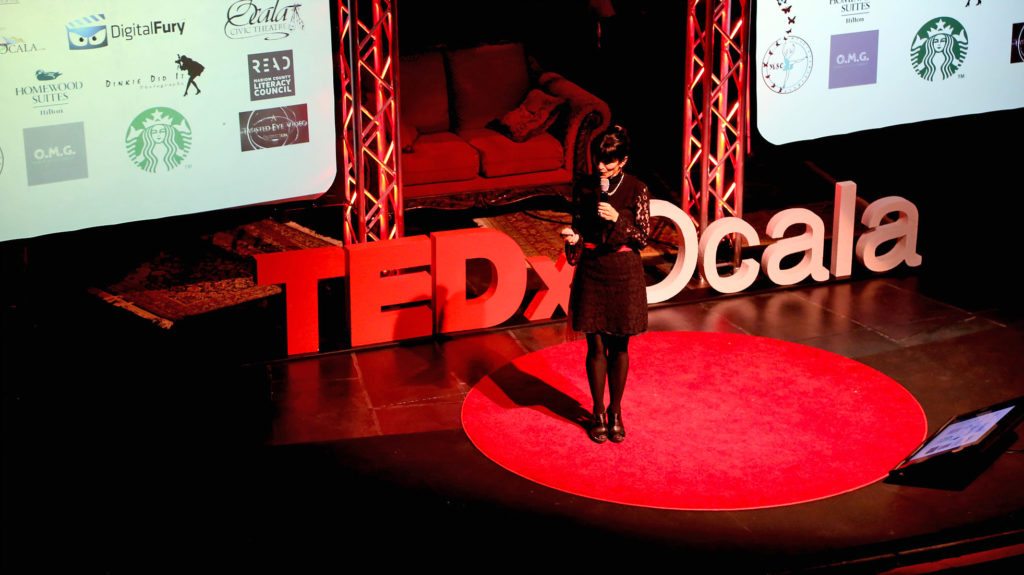 For the third time, TEDxOcala is bringing our community challenging ideas and thought-provoking speakers thanks to the event’s organizer, Manal Fakhoury, and a small group of committee members.

“Everything just came together and started lining up,” says Manal.

Manal originally began the application process with TED two years prior to the first TEDxOcala event in 2015. She and a few ladies had collaborated on the idea before she applied as a TEDx organizer. The many rules that TED has for independent events put her through a rigorous process before it all finally worked out.

To obtain a license for the event, organizers must follow TED’s guidelines, such as having a cap on the number of seats that can be sold for the first event. The number of seats were capped at 100 the first year and 300 in TEDxOcala’s second year. This year, it is anticipated that TEDxOcala with sell out the entire auditorium at the Reilly within the first several days. That’s 700 seats.

“You [as the organizer] have to attend one of the TED events to upgrade,” says Manal, explaining the new ticket increase for this year, and adding that she attended one TED event last June and another this past April for that very reason.

This year’s theme is ‘Risk Change,’ a topic that Manal believes will strike a chord in those attending. Of the 14 speakers lined up, six of them are local. In order to narrow down the number of speaker applications, there are two ways committee members select speakers: Speakers are either invited by the committee or given a 30-to-60-day window to apply. The main thing committee members guard against is motivational speaking. Speakers are to present new, out-of-the-box and game-changing ideas that challenge the audience rather than only motivate them.

“As speakers speak, I think they will give the audience that ‘aha’ moment,” Manal says. “It’s going to be phenomenal. I think we have an excellent lineup.”

Manal’s goal is to make TEDxOcala the best independent TED event in the world. As she continues to grow TEDxOcala, her vision is to bring speakers with pertinent ideas to impact people in the community to share these ideas and, ultimately, make a difference—whether it’s in their own lives or in the lives of others.

Learn more › TEDxOcala is on Saturday, November 4 from 9:30am to 4pm at The Reilly Arts Center. Visit tedxocala.com for more information.