The stunning career of Ocala photographer, cinematographer and composer Mark Emery has taken him to more than 35 countries.

Mark Emery is a globetrotting composer, wildlife photographer and Emmy Award-winning cinematographer. His passion and talent for capturing animals in the wild on fi lm have carried him on far-flung adventures worldwide.

His work has appeared in and on National Geographic, PBS, the Discovery Channel, ESPN, the Smithsonian Channel, The (London) Times, Newsweek, the BBC and more. He has com-posed music and scored soundtracks for dozens of TV shows, films and commercials in the United States and internationally.

He has filmed—up close and personal—the world’s most aggressive crocodile, in Cuba, ferocious grizzly bears weighing in at nearly a ton in Alaska, tiger fish in Africa and untold other species of reptiles, fish, fowl and four-footed mammals in more than 35 countries in North and South America, Europe and Africa.

Still, his heart and soul remain firmly rooted in the forests, fields and waterways of Ocala and Marion County.

It’s here that his interest in creatures great and small took hold. Here he learned the skills he would put to masterful use in his future career, first from his parents and later from local experts, almost all legends in their own fields. As employers, mentors and lifelong friends, they imparted their knowledge and wisdom to him and then sent him off into the wet, wild and wondrous world that would become both his workplace and his sanctuary.

Memorable Mentors
Emery arrived in Ocala in 1959 as a toddler when his parents moved here from Pittsburgh, Pennsylvania. Far removed from the urban atmosphere, his fascination with animals in their natural habitat evidenced itself early on.

“We were always out catching critters, snakes, birds, all kinds of things and bringing them home to our mother, who grew up in Washington, D.C.,” he says. “It was a real dichotomy for her. But we were totally having a big time and she didn’t com-plain all that much.”

Emery’s musical talents emerged early on as well. He remembers composing tunes at the piano as his parents, both classically trained musicians, sat across the room, transcribing and scoring what he played.

As a youth, he exercised his musical muscle in local bands while developing his physical stamina on the kickboxing circuit. Both activities helped prepare him for what life had in store just around the corner.

Soon, Emery landed an entirely different kind of gig—keeping an eye out for poachers at what’s known as the old Drake ranch in Marion County—that would lay the foundation for his future career.

He lived in the woods alone for nine months with one road in and out.

“I was there day and night, so I got to watch animals at a whole different level,” he shares. “I was literally living six miles down a dirt road with no neighbors and no electricity. I went swimming in the morning with alligators and did all kinds of other things.”

That experience, he says, set him up for his later work at the Ross Allen Reptile Institute in Ocala and on the glass-bottom boats at Silver Springs.

“Ross was the croc hunter of the world and a huge mentor of mine,” Emery recalls. “We were doing shows and talks for the tourists and I was learning amazing things.”

Allen and his team of world-class herpetologists weren’t the only Ocala-based influences on his early life. Bill Ray, whose family at one time owned the Silver Springs attraction, also played a role in Emery’s development when he worked there as a fishing guide during the winter months for a couple of years. In the summers, Emery ventured to the far north to do the same sort of thing in Alaska. Those early trips north would be the start an ongoing story line extending throughout his life.

“I had really good coaching,” Emery says. “Jordan was using color underwater video cameras, probably five to eight years before anybody else. At first, I was just setting up the cameras and learning how to use them. Later on, they would just give me a camera to go shoot whatever. It was amazing to work with them every day. If you couldn’t learn from that, your ears weren’t open.”

North to Alaska
Although Emery’s affinity for Alaska began when he was a fishing guide, his connection grew even stronger in 1994, when he not only served as associate producer but also co-wrote the soundtrack and did underwater camera work for Valley of Ten Thousand Smokes, a National Geographic Channel special. 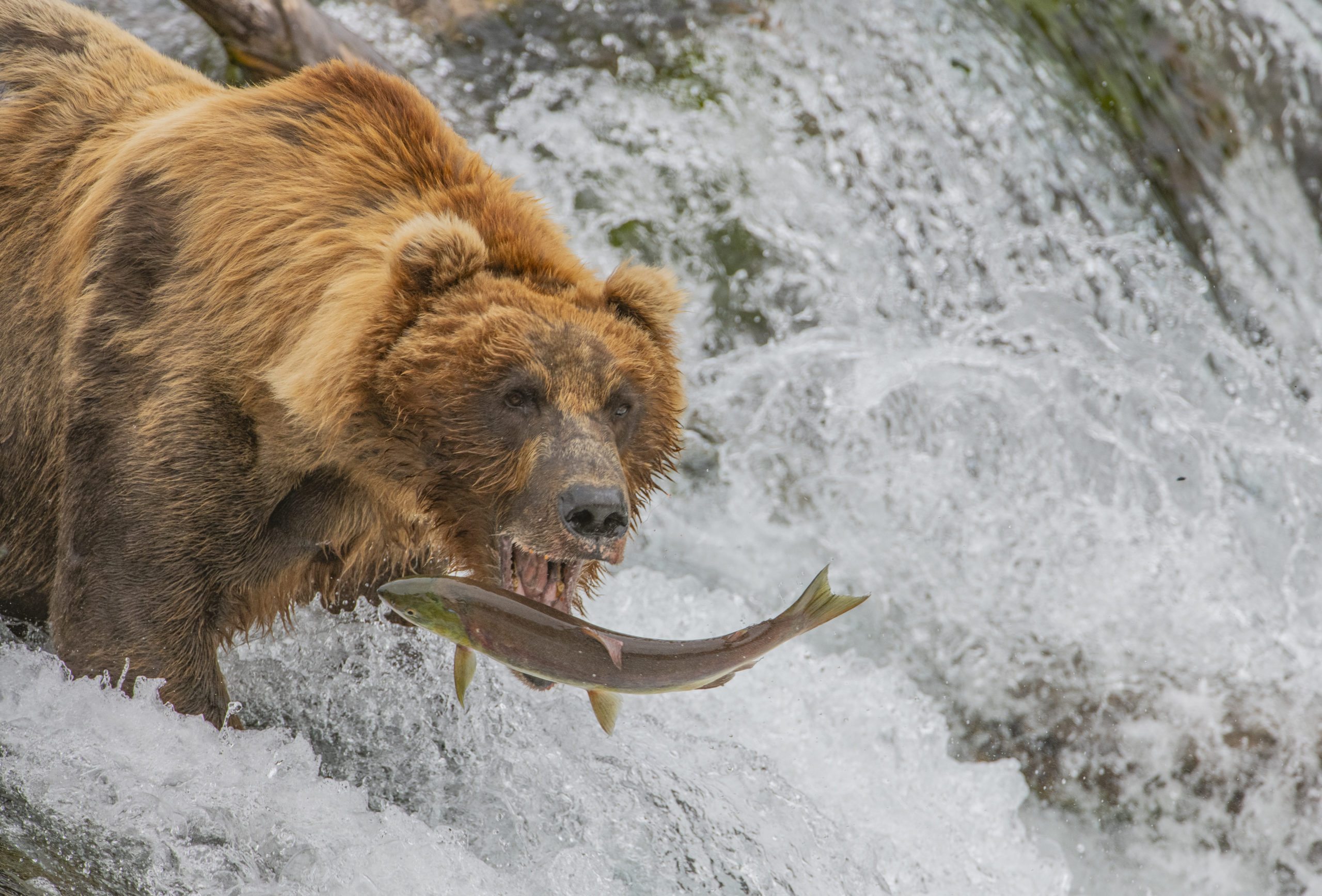 Shot in and around Alaska’s Katmai National Park and Preserve, the film chronicles the long aftermath of the June 1912 Novarupta, one in a long horseshoe-shaped string of volcanoes and earthquake epicenters dubbed the Ring of Fire that spans the Pacific Ocean from Alaska along the west coast of North America to Japan, the Philippines, Indonesia and other points south and east.

“The Novarupta caused total destruction—salmon, bears, everything disappeared,” Emery explains. “Seven-hundred feet of ash fell over 40 square miles and lowered the mean temperature in Chicago by two degrees for two years. And then, in the years aft er that was all over, things started coming back, and it came back dramatically. Just this year, we had the largest salmon runs in the world.”

Today, Emery and his wife, Mary, spend four to five months of the year in Alaska, living in a converted church they took over aft er the pastor and his wife left because a bear broke through the kitchen window.

“So, we’ve got a wonderful place to live now,” he says. “It’s got two pianos upstairs and I can go up there and play and practice.”

That solitude is in marked contrast to what can be a frantic, hectic pace on some of Emery’s assignments.

“I’ve worked on international projects where you have hundreds of people yelling at each other,” he offers. “And it’s conflicts all day long. I’m always happy to get back in the woods right away. For me, it’s simply a better way.”

Blown Away
Sometimes the tranquility Emery values so highly can throw a curveball. On a flight for a few days of camping at a remote lake in Alaska, the small aircraft on which he and Mary were passengers was hit by a violent wind gust that slammed the plane into the shoreline of the lake and flipped it over. Remarkably, no one was hurt. But after he, Mary and the pilot extracted themselves from the wreckage, one of Emery’s first thoughts was, “What if there’s a bear living near here?”

He scouted the perimeter of the site while the other two unloaded gear and provisions from the wreckage. Suddenly, a gigantic bear rose up just yards away.

“I yelled to Mary and the pilot to come over to form a group,” he says. “Together, we screamed and eventually the bear took off.”

Unfortunately, the bear was only the first of the challenges. The pilot had fi led a flight plan to retrieve some hunters at another site miles away but had not included the couple’s drop-off point as part of the plan, making finding the stranded trio even more difficult.

“We turned on the electronic location tracking device. Evidently some Russians picked up our signal off a satellite,” Emery recalls, “and called the Kodiak Coast Guard to tell them where to find us.

“Mary and I didn’t want to go back,” he explains. “So, we climbed up a mountain and watched as the rescue plane came in, picked up the pilot and flew out. We stayed for several more days and had a great time. After all, it was our summer vacation.”

Animal Storytellers
“If you’re going to be a filmmaker for an organization like National Geographic, you’ve got to be a storyteller,” Emery says. “I see stories being told all the time—all kinds of characters with their own little worlds. The animals can tell their own story. If you listen well enough, they do.”

Some of their stories are not suitable for children’s bedtime, like the time he was on location in Cuba filming a particularly aggressive and vicious species of crocodile that can literally leap 6 feet straight up into the air and grab prey out of the trees. Or, when on another assignment, he found himself in an open field filming a 1,200-pound grizzly bear.

“There were no trees nearby and you  couldn’t outrun a grizzly anyway. I don’t underestimate them. They’re among the largest land predators in the world and the males will even kill the cubs to bring the females back into estrus. They don’t have a Judeo-Christian ethic,” he says wryly. “We have a few tricks of the trade that usually keep us out of trouble and have been very successful for a long time.”

From the Heart
Sometimes, it’s the place that tells the story. In Emery’s heartfelt homage to Ocala’s fabled local waterway, the film Out of the Mist: A Silver River Story, he not only captures the legacy of Silver Springs as a tourist attraction and the setting for major movies and television shows, such as Tarzan, Sea Hunt and Moonraker, but also includes breathtaking close-ups of indigenous wildlife and memorable interviews with four longtime captains of the iconic glass-bottom boats. The film also addresses the environmental threats to the future of the once pristine waterway, something of great concern to Emery.

A special screening of the fi lm at Ocala’s historic Marion Theatre in 2019, where it premiered, was followed in 2021 by the unveiling of a bronze plaque commemorating Emery’s place in the Ocala Film Foundation’s Walk of Fame in front the theater. The walk also includes plaques dedicated to Silver Springs photographer Bruce Mozert, underwater cinematographer Jordan Klein Sr. and musical producer Bruce Swedien, all local talents who inspired or mentored Emery.

“It’s extremely humbling because they are stunning human beings,” Emery says of the honor. “I never thought I would ever be in the same group with them.”

Although Emery says the next places he’d love to visit are the Pacific Rim nations and Asia, one of his most recent projects kept him here in Marion County for almost two full months of filming: a soon-to-be-released six-part National Geographic TV series, America the Beautiful. It will air on Disney Plus and, according to the producers, will explore, “America’s breathtaking landscapes and wildlife” and how its “unique geography drives the forces of nature to extremes, shaping and reshaping the land and throwing down new challenges for life.” A trailer is available for watching online.

Love and Persistence
Emery says he grew up in a Christian home and is still active in his church. According to him, “The most important notion in the Bible is that God is love.”

“In my work, I want people to love what they’re seeing,” he offers. “If I put love in the show, people can translate what they see into, ‘I want to take care of that.’”

In that way, he says, he can deliver a message “without hitting them over the head with a hammer.”

“You have to lay it out as an honest story, which is harder to do,” he stresses. “But if you do it that way, you have a chance of affecting people in a really strong way.”

As to the secret to his own successful career, Emery says it’s all about persistence and being surrounded by great people. “Ocala is a spectacular place,” he says. “I’m so stunned that we recently had three Winter Olympic medalists from one little town, and we have no ice. That’s amazing.”

And so is Mark Emery—a homegrown boy whose life’s work has put the world of wildlife within everyone’s reach.