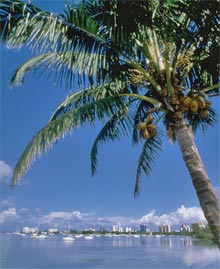 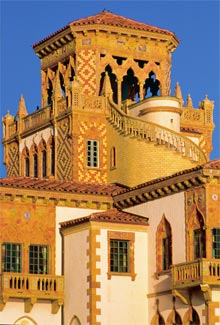 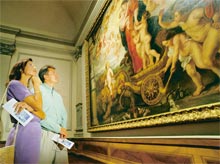 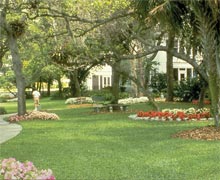 Even a weekend of wet weather couldn’t dampen our much-anticipated trip to Longboat Key. This getaway was planned months in advance with thoughts of lying on the beach until we were sufficiently cooked, strolling along the local tourist attractions and spending a lot of time outdoors in general. A loud crack of thunder brought us back to reality.

I can say that even with torrential thunderstorms unleashing nature’s fury, Longboat Key is still a beautiful, relaxing vacation destination. This quiet little beach community stretches for eleven miles between the waters of the Gulf of Mexico and Sarasota Bay. Andy and I departed from Ocala mid-day on a warm, muggy Friday in June. We arrived in Longboat Key three hours later, following several tie-ups on the highways. Beautiful houses, resorts and hotels line Gulf of Mexico Drive. We were searching for the Hilton Beachfront Resort, our hotel of choice.

Shortly after arriving and settling into our spacious ocean-view room, we decided to walk down to the hotel restaurant. We were famished from the trip, being in such a rush to get there, the thought of bringing food didn’t cross our minds, and stopping for a snack wasn’t an option. And, to top it off, it was dinnertime when we left!

The hotel’s restaurant, The Sunset Grille, was worth the wait. Our hostess, Peg McGarity was very helpful in recommending choice meals. She suggested the grouper. Not being seafood lovers ourselves, we didn’t follow her recommendation, but many around us did. Kate and Alex Zanski, visitors from Maine, raved about the dish when I questioned them.

“This is to die for,” she said of her grouper. “This is perhaps the freshest fish I’ve ever tasted; it’s not fishy at all.”

Kate’s husband, Alex, ordered the Seafood Alfredo, served with shrimp. He didn’t leave any behind on his plate.

The ambience in the Sunset Grille was both casual and romantic. The flickering candles showed well in the dimly lit dining area. The views from the floor-to-ceiling windows are panoramic, offering a glimpse of the beautifully lit swimming pool on one side and the white sands and bluish-green waters of the Gulf of Mexico on the other. I truly felt like we were in paradise. For one short weekend, we could put our daily concerns on hold and just kick back.

When our server Kristina returned with our food, I couldn’t wait to try it. They say presentation is everything, and our meals were served garnished with fresh flowers. My chicken mango sandwich was delicious. The mango gave the dish a sweet, island flavor. Andy chose the grilled chicken penne. The chicken was roasted with garlic, fresh herbs, tomatoes and asiago cheese; Andy enjoyed every minute of his dinner.

By the time we were through eating, it was getting late and darkness had already blanketed the area. We decided to order dessert to go and call it a night. By the way, the chocolate cheesecake is a must.

We woke early the following morning, ready to explore the area. The sound of rain hitting the window and a quick check of the weather confirmed that we would indeed have to change our beach plans. We decided instead to travel to nearby Sarasota to visit the well-known Ringling Museum.

The sprawling campus of the museum welcomes visitors with lush landscaping and friendly employees and docents. After checking in at the front desk and receiving our tickets for a guided tour, we were off with museum map in hand to explore the grounds.

Entering the first gallery, we were greeted by a larger-than-life oil-on-canvas painting by Peter Paul Rubens. Staring up at The Meeting of Abraham and Melchizedek, I was in awe of the detail, not to mention the amount of time it must have taken to create such an expressive painting of that size.

The museum is separated into many smaller rooms, making the experience personal for each visitor. We had a little time to wander around and admire the museum’s collection.

We were scheduled for a 2:30 tour of Mable and John Ringling’s home, the Ca’d’Zan Mansion. It’s a scenic walk to the edge of the museum grounds where the home is located, or you can take a trolley as a unique option. We opted to walk and get some much-needed exercise.

We weren’t outside for three minutes when the sky opened again, soaking us instantly. People scattered in every direction, looking for shelter from the sudden rain. We quickly ran back to the museum, deciding to visit the mansion a little later. It was fine with us since there was still plenty to see inside the museum itself. The vast collection of antiquities, sculptures and other contemporary works was enough to keep us busy.

If anything is synonymous with the name Ringling, it’s the circus. On our second attempt to walk to the mansion, we came across the smaller, more intimate Ringling Bros. and Barnum and Bailey Circus Museum. This was a treat since neither Andy nor I was aware that this separate museum existed. We discovered this building used to be the garage portion of the Ca’d’Zan.

Old-fashioned circus music filled the air as soon as we opened the door to the museum, whisking us back to our childhoods and reminding us of eating cotton candy and watching in awe as death-defying trapeze artists soared high above our heads.

The museum is adorned with memorabilia and artifacts from the long and eventful history of the Ringling Bros. Circus. Rare handbills and posters, sparkling costumes, massive animal cages on wheels, and antiquated circus equipment is prominently on display. Off to one side, several children sat around a television set that played some of the circus’ most famous acts and highlights.

Upon further exploration, one room showcased an electrical reproduction of the three-ring circus. Peering into the big top tent, the small replicas come to life as the ringleader’s booming voice sets up each performance. We sat and watched for a good ten minutes as the miniature circus acts performed.

Exiting the museum, we were greeted by something we hadn’t seen in quite some time — sunshine! We decided to take advantage of this rarity and go for a walk through the rose gardens before finally making our way to the mansion. I felt like we were the only two people on the grounds as we strolled slowly through the roses hand in hand, enjoying the beautiful blooms. It was very romantic and very serene.

Just beyond the flower garden was the waterfront mansion. The dark blue sky behind the Ca’d’Zan met Sarasota Bay perfectly, creating a picturesque backdrop for the Venetian Gothic structure. The 22,000-square-foot, 4-story home is as impressive as it is expansive, and includes 32 rooms and 15 bathrooms. A crystal chandelier from the original Waldorf-Astoria Hotel in New York greets guests in the Grand Reception Hall. Generous supporters of the arts, John and Mable commissioned different artists to create one-of-a-kind masterpieces throughout their home.

To admire my favorite painting you have to look up! On the ceiling of the dining room, there are scenes of celebration and dancing. Each section of the mural features a dance, complete with native dress, from different parts of the world. Another mural, located on the ceiling of the reception hall, was never completed, and those who worked to restore the Ca’d’Zan chose to leave it that way.

Exploring floor after floor of the mansion with our tour guide, it was clear the Ringlings enjoyed the finer things in life. Spectacular China, marble bathrooms and courtyards, and the most state-of-the-art equipment and conveniences (for the time) are preserved for guests to see. The Ca’d’Zan was our last stop at the museum.

After so much walking (and running), we chose to take the trolley back to the parking lot. Our next stop? Selby Botanical Gardens.

Driving up to the gardens, I knew it would be something special. The building is literally surrounded by greenery. I know this doesn’t sound like a big surprise, but the intensity of the smells and sights made me feel like I was entering a tropical rainforest.

Closing my eyes and taking a deep breath, I couldn’t help but let it out as a big sigh. The smell of the flowers and the sounds of lightly falling water awakened my senses. Orchids, bromeliads, and palms were just a handful of the exotic flowers surrounding us.

The rain softened, so we were able to take a stroll through the outdoor gardens as well. Walking along a path through a bamboo pavilion, Andy and I discovered a large rock with a hole carved in one side. Upon closer examination, we discovered a sign that read, “Place your head in the hole and hum different notes. When you hit the right note a feeling of tranquility and well-being will wash over you.”

It didn’t take much coaxing to get Andy to try it first. I have to admit, he looked pretty silly with his head in a rock. (It’s a photo I’ll show our future children someday.) But to my surprise, he said it worked! Now it was my turn. Luckily I was still holding the camera, so there is no photographic evidence of me with my head in a rock. After humming several different notes, I must have finally hit the right one. A gentle vibration began to fill the rock, making it feel almost like the pulsations were traveling through me.

No matter where you go in Longboat Key and the surrounding area, you almost always seem to have a view of the Gulf of Mexico. The museum, the gardens, the aquarium — they all had gorgeous vistas.

Our last day in Longboat Key, the sun began to peek from behind the clouds (of course!). After we checked out of our room, we went back one last time to the Sunset Grille to try the breakfast buffet. Let me tell you, what a feast! I was completely stuffed from the hash browns, ham, omelet and fruit salad I managed to consume. Before our trip home, we walked out to the beach… finally! The air smelled clean and the humid breeze swept through our hair. We walked up and down the beach, watching the sunbathers and the small children building sandcastles. I couldn’t help but feel a little envious of the people who were just arriving to begin their vacations — on a sunny day no less!