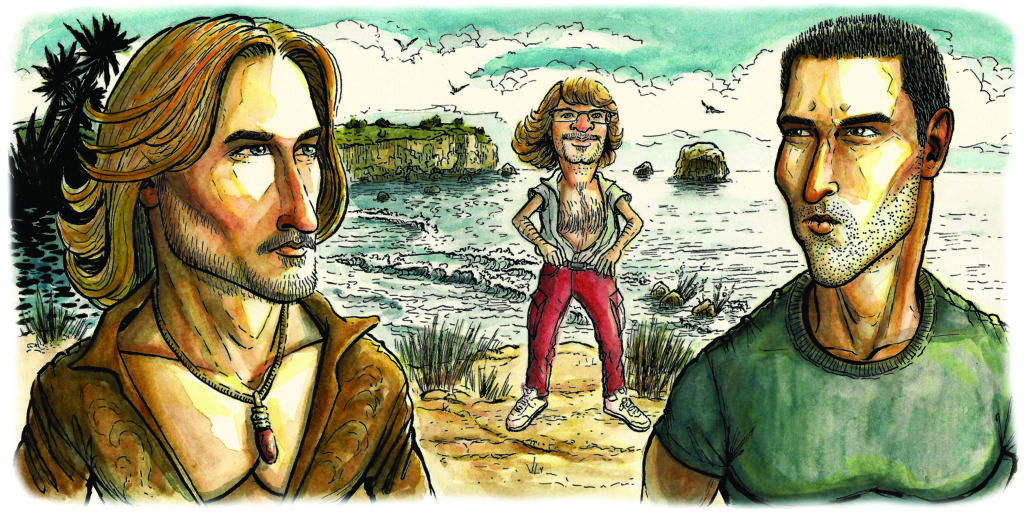 Amid the tension, pandemic and political bile simmering outside our doors, one contentious debate boiled inside our home in recent weeks: Who’s hotter, Jack or Sawyer?

These names may ring familiar with people who turned on a TV this century, but the Schlenkers just discovered Lost (the hit television show that averaged over 11 million U.S. viewers per episode).

We are not a big TV family—not because we are above the medium but because it is nearly impossible to find something all four of us can agree on. These days, our daughters often watch their shows on mobile devices, while my wife—due to an obvious chemical imbalance—does not like Monty Python.

So, during quarantine, we apprehensively settled on Lost, which premiered in 2004.

For those who lived in the same cave we did during that time, here is a summary: A jet full of impossibly good-looking people crashes onto an island ruled by angry smoke and the feet of a crocodile-man statue.

There, they punch each other often, apparently protecting the hair gel they use to keep themselves gorgeous for six seasons without access to a Publix.

Turns out, there are other good-looking people on the island and one malevolent nerd who gets imprisoned in a room with mystery electricity, vintage records, torture cells and a button that must be pushed every 108 minutes because…well, that will be explained later in logical plotlines involving time travel, a fried chicken chain, a nuclear bomb, a Camaro, empty coffins and a secret stash of hair mousse Desmond must have kept in the well of doom.

Spoiler Alert: As our daughter, Katie, adeptly proclaimed in the aftermath, the island’s power ultimately was a giant drain plug.

The heart of Lost was the win-the-maiden struggle between Jack the neurosurgeon and Sawyer the sneering conman, whose top five shirt buttons were lost in the crash. It was a battle between the clean-cut doc and the sweaty scoundrel.

Much to my surprise, my sweet wife went with greasy-locked Sawyer, while the girls went with preppy Jack (or dead-but-hunky Boone, but let’s not go there).

Team Jack vs. Team Sawyer was as intense as the still-relevant Mary Ann vs. Ginger debate from the ‘60s and ‘70s. That answer, of course, is Mary Ann, however the unrest still stings.

But here’s the thing we most enjoyed about Lost: We were together every night during dark times. We laughed, gasped and carefully dissected theories. Our dinner conversations were about fun and fantasy instead of pandemics and politics. We looked forward to it every night, sometimes making brownies and cookies for viewing.

And there were tears during the finale. We will truly miss these weird and gorgeous people, who may or may not be zombies. We also will miss our time on that island with each other.

So much so, we are scrambling for another baffling serial mystery to watch together.

Until we find it, I plan to let my hair grow long and greasy, sculp my sneer, unbutton my shirt and learn to punch sexy doctors who try to woo my girl.

Homicidal smoke is no match for Team Dave.