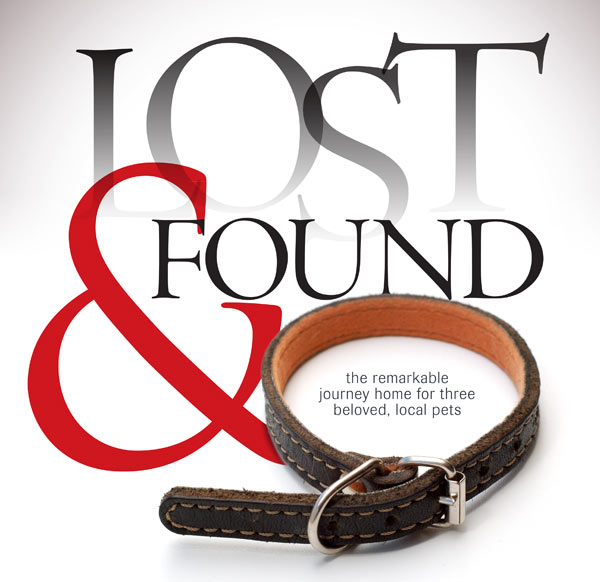 The signs are heartbreaking.

Pet owners who have lost their four-legged companions know all too well the anguish of posting fliers around the neighborhood for their missing animals. But not all lost pet stories have an unhappy ending. Some end up becoming remarkable tales of reunion as three Marion County pet owners recently shared with Ocala Style. Meet wayward feline Vicky, the fiesty Schipperke Foxy, the adorable foal Baby Ray, and the owners who love them—even when they go astray.

‘I Looked All Night’

Although we like to say we “own” our pets, sometimes they choose us. Such was the case when Mirtha Corominas heard a noise outside her door and discovered a gray-and-white cat. Concerned that someone had lost the friendly feline, Mirtha posted signs, but nobody called, so Mirtha opened her heart and home to the kitty and named her Vicky—short for Victory—a name that would prove most appropriate. 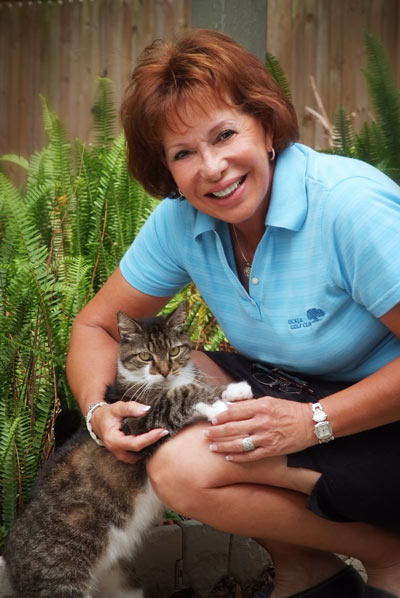 Seven years later, in May 2009, Mirtha and her husband divorced, and she moved to a condominium. Vicky, of course, went with her.

“I had driven there the first night and was carrying Vicky when I got out of the car,” recalls Mirtha. “Something scared her. She jumped out of my arms and took off. It was dark, and I followed her, calling and trying to find her. I looked all night.”

Heartbroken, Mirtha showed Vicky’s photo around the next day, hoping someone had spotted her cat.

She continued searching her new neighborhood, to no avail. As days turned into weeks, Mirtha sadly accepted the fact that her cat was gone. She hated the thought of Vicky lost and frightened in a strange area or worse, hit by a car. Her only hope was that someone had found her and taken her in.

In late October, Mirtha received a call from an acquaintance in her former neighborhood. The woman said a cat that looked remarkably like Vicky was hanging around Mirtha’s old house. She’d taken food and water over, hoping to encourage the cat to stay while she tried to contact Mirtha.

Mirtha immediately drove over and to her amazement, the “stray” was indeed Vicky. Both Mirtha and her neighbor were in tears over the reunion with the thin-but-healthy cat. Nearly five months had passed since Vicky escaped from Mirtha’s arms, yet somehow she managed to survive and miraculously found her way back to the only home she had known. A direct drive from house to condo is about six miles, but Mirtha will never know how many miles Vicky covered in her long quest.

“She had to cross Silver Springs Boulevard and 25th Avenue,” says Mirtha. “I don’t know how she did it.”

True to her breed, Foxy has always been a bit headstrong. Despite this tendency, the Schipperke did well in agility classes with her 18-year-old owner, Kristin Moreau, though Foxy’s feisty nature almost proved her undoing—twice. 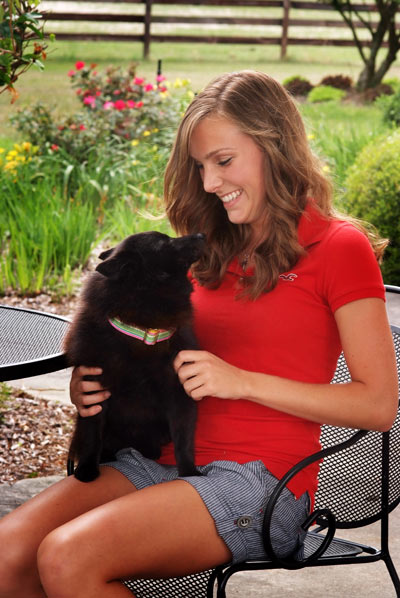 Kristin and her beloved “Foxy” were inseperable, until the unthinkable happened. Friendly neighbors and a caring vet reunited the pair.

For several years at the Moreau family’s horse farm in northwest Marion County near Citra, the family has relied on an invisible fence to keep their dogs safely contained. Foxy had never challenged the barrier, but last December she was so frightened by a neighbor shooting his gun that she ignored the fence’s warning and raced out of the yard. The Moreaus searched frantically to find her before nightfall.

“We have coyotes out here and we’d already lost a couple of cats, so we were really concerned,” says Kristin’s mom, Sharon. “We looked everywhere, but we couldn’t find Foxy.”

Night came, but there was no sign of the free-spirited little dog, who at a mere 12 pounds would’ve been no match for coyotes or other predators.

Determined to exhaust every option, Sharon ran an ad in the Star-Banner and posted “lost dog” signs with Foxy’s picture around the area. Sharon even visited local animal shelters to see if Foxy had been dropped off.

Two days and nights passed, and Sharon told herself that her daughter’s beloved dog was gone for good. Kristin was despondent. The Christmas spirit seemed to have evaporated from their home.

Early the third morning after Foxy’s disappearance, their phone rang. It was Animal Clinic on U.S. 441. Someone had brought in a Schipperke. The clinic had called the shelters and found the Moreaus’ information about Foxy posted on their lost-and-found boards.

Kristin was still asleep. Hesitant to get her hopes up, Sharon drove to the clinic by herself. To her great relief, the mischievous black dog was indeed Foxy. Dr. JoAnne Stapler and her staff had even given Foxy a shampoo and put a bow around her neck. Foxy had been found scratching at the door of Dorothy Bush who lives about a mile and a half from the Moreaus’ farm. Dorothy took her to Animal Clinic because of Dr. Stapler’s reputation for helping lost pets.

Sharon had Foxy microchipped before leaving the clinic. Back home, she slipped quietly into Kristin’s room and placed the dog on her daughter’s bed for a joyful reunion.

This past winter, Foxy again braved the invisible fence and took off, but thankfully, she was found by a neighbor girl the next day. A grateful Sharon realized the teenager looked familiar.

“Last year three well-cared-for cows that were obviously someone’s 4-H projects wandered onto our farm,” she recalls. “We caught them and put them in a paddock until we could find the owner, who happened to be a girl in the neighborhood. The girl who found Foxy the second time was this same girl. I never even got her name. She refused to accept the reward we wanted to give her and said now we were ‘even.’ It was a kindness repaid.”

If Foxy had ulterior motives to become a full-time house dog, her plan worked. The Moreaus no longer trust the electric barrier to contain their free-wheeling adventurer, so the only time Foxy ventures outside is when she’s under close supervision.

“I encourage all owners to microchip their pets because not all of them will be taken to a vet like Dr. Stapler, and the animal shelter only holds them for three days,” says Sharon. “Foxy really fell into good hands both times she ran off. With the coyotes here, we were just so lucky. Sometimes I think maybe she wanted to be an indoor dog all the time.”

Rescue operations see more than the usual amount of heartbreak. It goes with the territory. But the chance to make a difference is also very real, and at times touches on the miraculous. 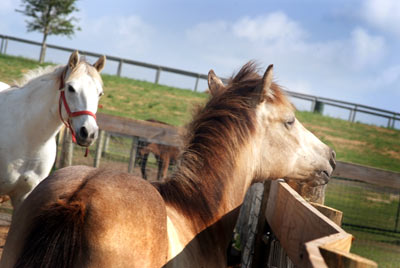 There’s something to be said about the bond between a mother and a child—whether they have two legs or four, like “Baby Ray” and “Sunshine.”

Scanning the ads on Craigslist one day in May 2009, Theresa Batchelor of Beauty’s Haven Equine Rescue [“Horse Haven” by Claudia O’Brien, February 2009] noticed a listing for a foal “free to good home.” Although she didn’t know the animal’s story, she had a premonition about him.

About two weeks later, a farm in the neighborhood called regarding a foal in need of help. When Theresa arrived, she recognized the tiny baby immediately. He was the “free to good home” foal. His photo online, however, didn’t do justice to his fragile state. Huddled in a corner of the stall, the colt was pathetically thin and weak. His scruffy coat was missing in patches and he had diarrhea. Both eyes were clouded over with what appeared to be cataracts.

When he was about a month old, his original owners had determined he was blind. They intended to shoot him, but their blacksmith stepped in and took him. Since then, the foal, which was born premature and was barely two months old, had bounced between four different homes.

When Theresa saw the baby, she knew there was no leaving him behind. She made room between the seats and brought him home in her mini van.

Once he was settled at the rescue operation, Theresa’s vet examined the foal and confirmed his blindness. This, plus the fact that the foal swayed back and forth like Ray Charles when being petted, led Theresa to name him “Baby Ray.”

Foals at that age are normally still nursing, but this tottering baby had been away from his mother for about two months. Ignoring the offered feed, he paced the fence and nickered forlornly. The foal’s condition tore at Theresa’s heart. Fearing she was on a dead-end mission, she began contacting every source she had. After much effort, she located the foal’s original owners, who confirmed that they still had his mother.

“They wouldn’t give her to us, but said they would sell her,” recalls Theresa. “I did a lot of praying and soul-searching. We raised $750 in two days and bought her.

“Once at the farm we couldn’t turn them out together,” she continues. “Would the mom accept the baby after being separated for so long? Was she even his mom? We cut some of her mane and weaved it into his. We let them meet over the door to the stall so she could smell him. We let them graze while haltered and on lead ropes. After a period of grazing, we took the baby back to his stall to nap. The mare let out a big whinny. Baby Ray turned and whinnied back. That’s when I knew they were mother and son and that they would be okay.”

Baby Ray’s condition only improved after they were reunited. Although the mare, now named Sunshine, never began producing milk again, she dotes on Baby Ray. Theresa has maintained detailed updates of Baby Ray and Sunshine’s story on the farm’s website (beautysequinerescue.org), and as a result, horse lovers sent donations that allowed veterinary surgeons at the University of Florida to operate on Baby Ray in hopes of removing the cataracts and restoring his vision.

“They gave him a 90 percent chance of getting his sight [back]. Unfortunately, he fell into that 10 percent category,” says Theresa. “But he’s thriving and happy. Finding his momma and reuniting them saved his life. I’m sure of it.”

Three easy steps for what to do before and after your pet goes missing.