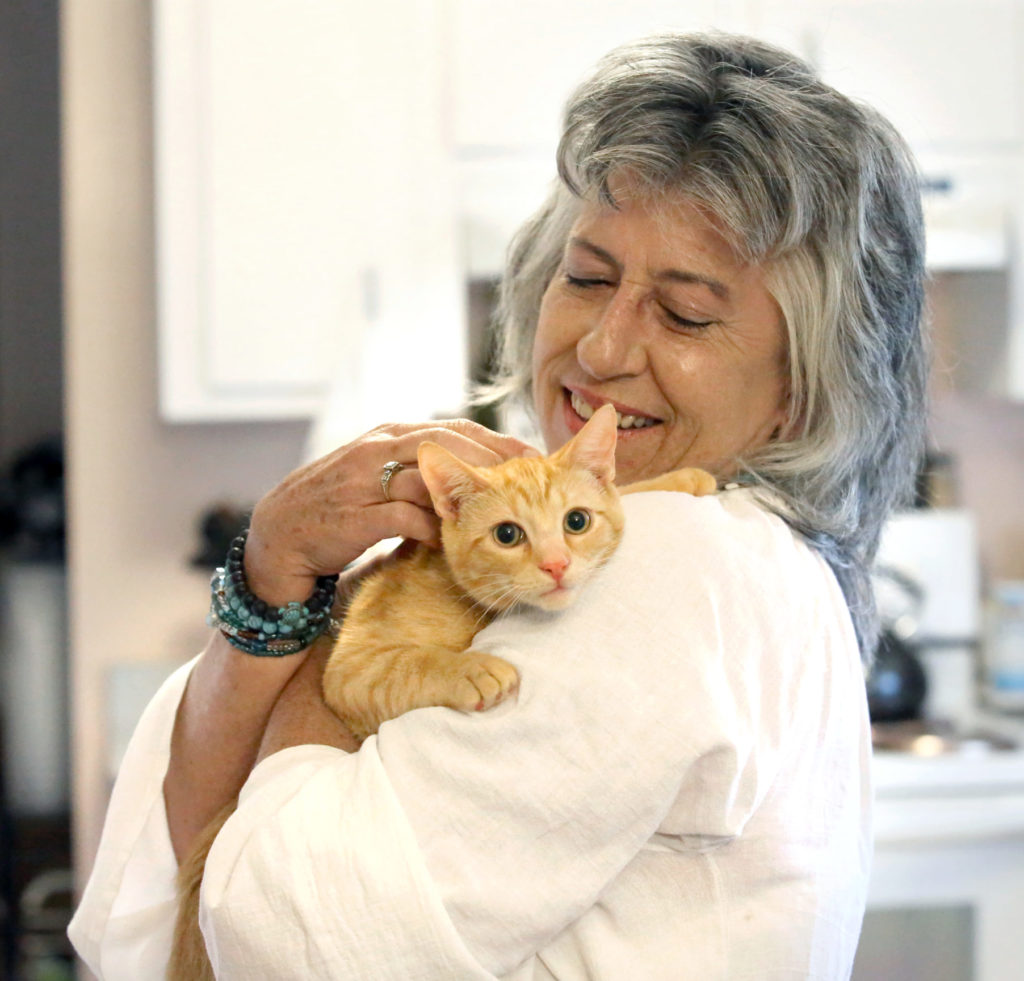 A tiny kitten gets help from a “village” of good souls, including volunteers with W.A.G.S. Animal Rescue.

At night, Louie likes to sleep snuggled up on the bed next to his owner, Kelly Owen McCall. According to McCall, the soft yellow cat with the bright green eyes is a bundle of energy—just like a 5-month old kitty should be.

“Louie’s a little hyper until he falls out,” she says with a smile. “He likes balls; he loves to play. Then he’ll fall asleep on you and he’s pretty snuggly.”

On a night, not so long ago, I found Louie, shivering and hungry, sick and covered with fleas. I wasn’t even sure he would make it through the night.

It was actually my cat, Fiona, who discovered him. I couldn’t sleep and was working in my home office at around 2am one night in April when Fiona growled at something outside the window. I couldn’t believe what I saw.

A tiny kitten was curled up on the outside window sill.

I slipped out the back door and the poor creature let me pick him up. He was small enough to fit in one hand. I held him next to my heart and spoke softly to him as I brought him inside.

His eyes were weepy and barely open. His fur was matted and he looked awfully skinny.

He gobbled up a generous portion of canned cat food and settled into the soft towel I placed in the cat carrier. As I closed the door to my home office, separating him from my two nosy adult cats, I silently hoped he would make it until morning.

It takes a village

As it turned out, taking the kitten to the Style office the next morning, while waiting for the shelters to open, was the best thing I could have done. While he snoozed in the carrier on my desk, my coworker Cheryl Specht reached out to an acquaintance, Jeani Derrough, the president of W.A.G.S. Animal Rescue, to see if they could help.

The speed and efficiency with which they mobilized their team of volunteers to save one tiny kitten was amazing. By noon, dedicated volunteer Sherri Kirkland was there to transport him to the Ocala Square Animal Clinic, where Dr. Albano diagnosed an upper respiratory infection and treated him with antibiotics and eye ointment. He had so many fleas that he was anemic. Kirkland took him as a foster while they searched for an adoptive home.

The very next day, Kirkland sent me a picture of a much healthier looking “orange floof” with this message: “Thank you for saving his life.”

Just a few days later he was loving life at his forever home with McCall.

According to Derrough, who cofounded W.A.G.S. four years ago, their all-volunteer network has as many as 100 animals in 30 foster homes at a time. The need is great. Even with cooperative care through nonprofit clinics including VOCAL and Sheltering Hands, they constantly struggle to pay vet bills. Nearly every day, they are contacted about an animal they simply don’t have the resources to help.

“We get really excited when it all falls into place,” Derrough says. “Louie is pretty much a perfect example of how we want it to work.”