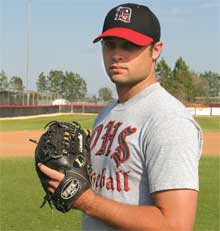 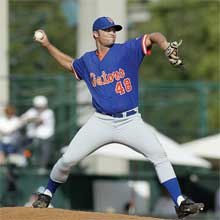 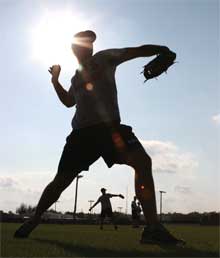 When Tommy Boss took the hill with the Florida Gators trailing Arizona State 3-0 in the pivotal elimination game of the 2005 College World Series, he couldn’t have possibly envisioned the circuitous route his baseball future would take.

In the short term, he would be a hero. Tommy’s masterful pitching display would save the Gators, as he retired nine of the first ten hitters he faced in helping the Gators stave off elimination and escape with a hard-fought 6-3 victory.

The exposure he received pitching against the collegiate rank’s finest athletes should have helped his draft stock. His senior season wasn’t too shabby either — Tommy sported a 9-4 record with a 4.11 ERA in 111.2 innings of work. With the Major League Baseball draft just days after his finest pitching performance, the long-term baseball future appeared bright for the Gators’ senior hurler.

Tommy still had reason to keep hope alive, however. Several teams — the Boston Red Sox, Kansas City Royals, and Toronto Blue Jays — had expressed interest in him. To his delight, the Red Sox, his favorite team growing up, called shortly after the draft ended.

Tommy boarded a plane and headed to Beantown. He met with members of the Red Sox front office, went over contract details, and filled out all the necessary paperwork. Only a minor formality stood in the way of Tommy’s dream to play for his beloved Red Sox.

That requirement took the form of a physical administered by team doctors. They revealed to an incredulous Tommy that he had a torn labrum, one of the most severe injuries a pitcher can suffer.

The deal with the Red Sox was off.

To Tommy, he was in perfect health, despite a heavy workload in the College World Series. He sought a second opinion and it showed that his shoulder was sound.

“My arm never hurt,” said Tommy. “Our doctors said it [the labrum] was a little fraying, but nothing out of the ordinary. My arm feels great. The doctors said any pitcher who has thrown for years will not have a perfectly clean shoulder.”

Tommy would take the next six months off from pitching to rest and plan his future — on and off the baseball field.

“There wasn’t a time I thought about giving up,” Tommy said. “I was left with an ultimatum: quit or fight back. I use it as extra motivation.”

In December, some good fortune smiled on Tommy. His dad, Tom, works at Progress Energy with Terry Lanier, who put in a good word to his brother, Hal Lanier, who currently manages the Northern League’s Joliet Jackhammers. Lanier played 10 seasons in the majors with the Yankees and Giants and was the skipper for the Houston Astros from 1986-88.

The Northern League is not just another wayward locale off the beaten path to get to the major leagues. The league originally formed in 1902 and has existed for the better part of the last century. The league’s current incarnation re-emerged in 1993.

Since that time, over two dozen former Northern League players have made it to the majors including J. D. Drew, Kevin Millar, Jeff Zimmerman, and Rey Ordonez. In Lanier’s past 10 years managing, he’s had 39 players sign with major league organizations.

After the conversation with his brother, Hal Lanier’s interest was piqued and Tommy received a call from the ball club. It didn’t take much to convince Tommy on the idea of pitching professionally.

Since January, Tommy has pressed on in relative obscurity, coaching and training at his alma mater, Dunnellon High School. He serves as a substitute teacher and works as an assistant baseball coach under Dunnellon head man George Welsh. He’s adapted to coaching quickly. Welsh estimates the team’s ERA is only 2.50 to date and that Tommy has made a big impact on the kids he assists.

“He’s a good teacher,” Welsh said. “He shows these kids that they can go somewhere and have success.”

Being home has been a big positive for Tommy.

“It’s been a pretty easy transition,” Tommy said. “My family has been great. I wouldn’t be where I am without their support.

“The whole community of Dunnellon means a lot to me,” he continues. “Everybody knows everybody [and it’s] a great place to grow up and live. Everybody on ESPN kept asking, ‘Where is Dunnellon?’ They laughed when I said there are only three or four stoplights here.”

On May 3, Tommy will be leaving the comforts of home and reporting to the Jackhammers. The teams of the Northern League play a 90-game regular season with nine other teams, culminating in a league playoff.

“I see it as a win-win situation — get some experience and hopefully get seen by some major league clubs,” Tommy said. “My goal is to go out and earn a job as a starting pitcher and show that I’m healthy.”

The 22-year old is the youngest player listed on the Jackhammers’ preseason roster. Many of his prospective teammates have played in the minor leagues and are looking for a second chance. While youth is still on his side, it is important for Tommy to log some professional innings.

And although Tommy doesn’t have the blazing fastball that scouts drool over, he possesses an overall makeup that bodes well for his future. His pinpoint control, excellent movement on his pitches, and willingness to throw any of his four pitches (fastball, curve, slider, and changeup) in any count or situation makes him stand out among his peers.

Additionally, he possesses one trait that separates him from many high-round picks that get by on physical talent alone.

“I’ve always tried to work harder than anyone else,” Tommy said. “I run about six days a week and when I run, I wonder if anyone else is.”

“One thing scouts can’t judge is character and heart,” he says. “His stuff is good enough for him to be a professional player. I think scouts got a little scared, but he’s going to be fine.”