This emerging artist’s unique view of the world is being recognized by leaders in the local art community.

Kelsey Mahoney creates intricate works of art made up of thousands of small geometric shapes rendered in various colors and tones. The compositions are oft en filled with defined patterns and shapes but within those larger shapes there is a distinct asymmetry and randomness that reveals a thoroughly original vision.

While her work may be best described as Abstract Expressionism, which is regarded as one of the most important and influential art movements of the 20th century, it would be equally fair to say that her work defies strict classification. The compositions are vibrant, meticulously detailed and possess a mosaic-like quality but without the order or realism of traditional mosaics.

True abstract art has the ability to evoke an emotional response through color, shape and form rendered with a vibrant energy and dynamic tension—expressing its meaning without presenting an identifiable scene. Mahoney’s chaotic and emotional use of pattern with no discernable narrative or order allows a chance for contemplation and an opportunity for the viewer to see something unique and personal in each piece.

Mahoney, who has Down syndrome (DS), has been creating art since she was 6 years old. Each person with DS has a unique way of looking at life. Their artistic expressions are distinctive because they reflect their individuality. Over the past 20 or so years, many such artists have had their work recognized by the artistic community and have flourished in the fi eld, allowing them to showcase their art around the world—some have even had their work included in exhibitions and the permanent collections of such world-class museums as the Museum of Modern Art in New York. But Mahoney and her family, which includes sisters Madison and Brianna, want the world to focus on her talent as an artist, not as an artist with DS, above all else.

At 25, Mahoney is beginning to be recognized by leaders in the local art scene and has had the opportunity to exhibit and sell her work at local galleries including NOMA Gallery and 8th Ave. Gallery in Ocala. Lisa Midgett, owner of the NOMA Gallery, first met Mahoney and her mother Amy Agricola at one of NOMA’s exhibitions in 2020 and introduced her art to the community.

“I was very intrigued by her technique,” Midgett recalls. “I was so impressed with her work that I asked to display Kelsey‘s work in February of 2021 alongside David D’Alessandris’ show Paradise. For an emerging artist like Kelsey to be shown alongside David D’Alessandris, with his many years of experience and success, was definitely a feather in her cap. I believe we sold three of Kelsey’s pieces during that show.”

Mahoney was then invited to participate in WUFT TV’s Artistry in Motion exhibition, a group show at the Cofrin Gallery at Oak Hall School in Gainesville and most recently opened her first solo exhibition, Pixel Adventures, at the 8th Ave. Gallery.

“I was instantly mesmerized by the intricacy and color patterns involved in each work,” explains Seth Benzel, the gallery’s owner. “To me they were pure energy…but harnessed in a way that was delicate and harmonized. Kelsey’s works vibrate off the canvas.”

He points to her curiosity, inspiration and dedication as owing to her success.

“I call Lisa our angel because she’s been beyond incredible, as have her staff ,” Agricola shares. “And Seth has been amazing too. Without them, we would be going absolutely nowhere. As a non-artist parent, I wouldn’t have pursued Kelsey’s art because I was that clueless. They have opened up a world of possibilities to Kelsey and have been so supportive, kind and encouraging.”

While Agricola describes her daughter as quiet and super shy, with a dry sense of humor, she explains that an early opportunity to step into the spotlight gave her some of her star quality, which can be witnessed in a recent video segment she filmed for WUFT to promote Artistry in Motion.

“When we lived in New York state there was a call for children with special abilities to model for Toys ‘R’ Us. We went to New York City and she was so good on her first photo shoot, they asked for her to do another one,” remembers Agricola. “Although dreadfully shy, she lights up in front of the camera.” 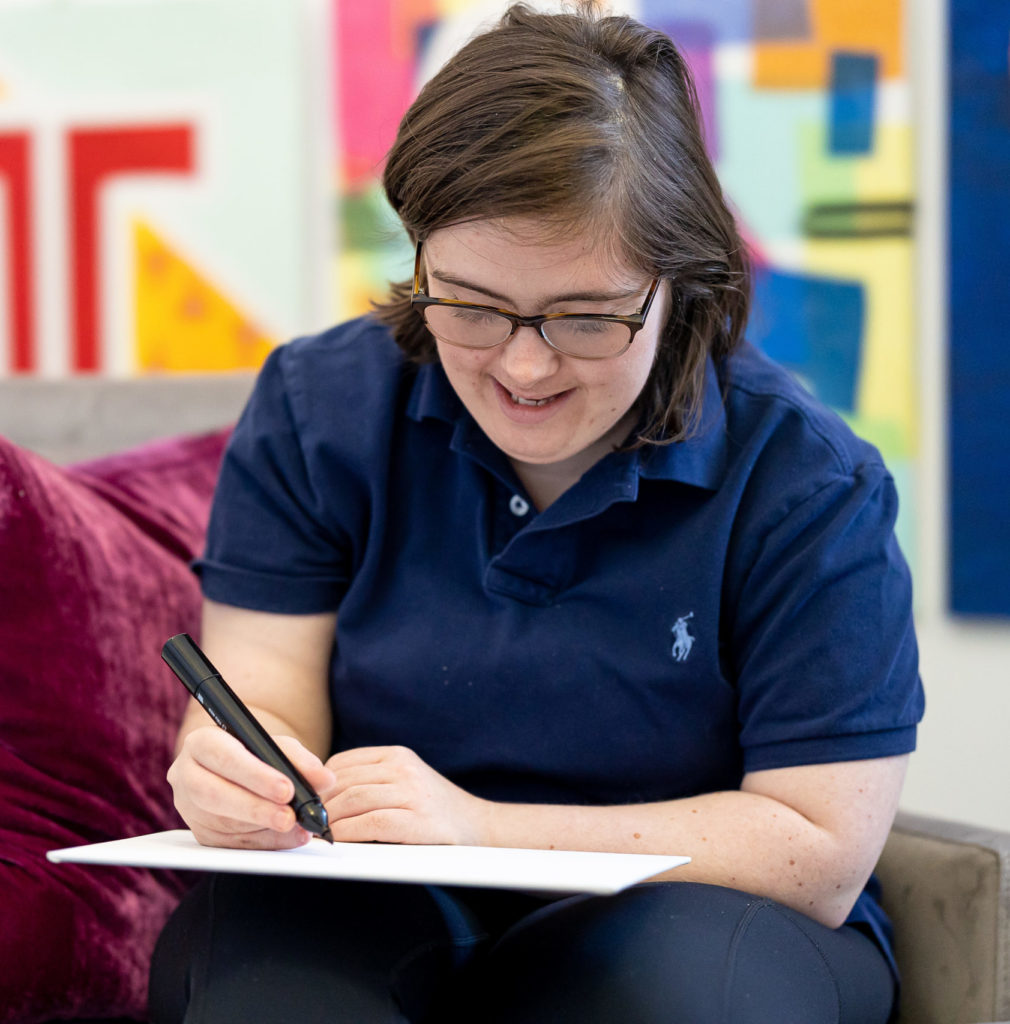 Agricola, who Mahoney calls her “co-pilot,” as well as her father, John Mahoney, of Tampa, contributed to her growing confidence and artistic leanings by exposing her to many new experiences through their travels and their time living in Italy during her formative years. Because of that exposure, Mahoney’s passion for art and food developed at a young age.

“We lived in Naples for six years and Kelsey went to school there until she was 10,” Agricola offers. “They still teach cursive writing there and they actually teach the kids how to draw. Art is definitely encouraged there. And we loved the food. So now Kelsey loves to make lasagna….Well, Kelsagna we call it, right?”

“It weighs like 40 pounds,” Agricola jokes. “It’s great! It’s just a go for it and have some fun thing. No rules. Her lasagna has turned into an edible art form.”

Mahoney approaches her work with the same sense of fun and spontaneity.

“You know it comes into my mind and I just do it. I use markers… Sharpies,” she clarifies. “It makes me feel normal and it’s relaxing. I usually dance when I’m doing my art. It helps me focus.”

She says her go to tunes are mostly rap songs, but she also is a big fan of The Weeknd and likes to listen to Maroon 5’s Sugar when working.

Exactly how much dancing she gets in is unclear, as her compositions are so detailed and time consuming.

“It takes a while to process my art,” she says. “Usually two weeks.”

She’s also focused on the future and has her sights firmly set on an opportunity to fulfill her ultimate goal.

“I want to go to a museum and put my artwork there,” she offers with a confidence that makes us certain it is only a matter of time before she realizes that ambition.