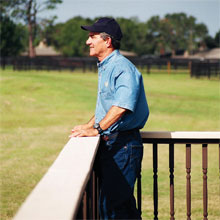 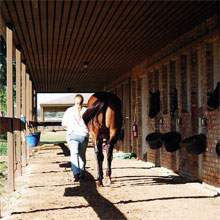 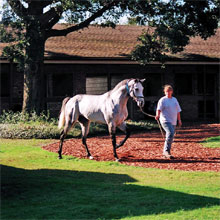 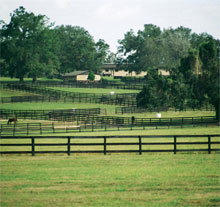 Progress comes at a price. When the scenic hills of oak-studded horse pasture become too valuable, landowners often succumb, understandably, to the developer’s siren call. Yet when hundreds of acres of farmland are turned into home sites, shopping centers, and asphalt, there is inevitably a sense of loss.

At the end of 2001, long-time Florida breeder Harry T. Mangurian Jr. finalized arrangements to sell his highly successful Mockingbird Farm. Located just west of I-75 and fronting a busy stretch of SR200, the 1,000-acre farm had been one of the state’s leading breeding operations for decades. When the farm’s sale was announced, many Marion County residents feared that it wouldn’t be long before the fences came down and the bulldozers came in, relegating yet another historic Thoroughbred farm to memory.

Fortunately for Marion County and for racing, the farm’s purchaser was Eugene Melnyk.

Year-round residents of Barbados, Melnyk and his wife, Laura, have two young daughters, Anna and Olivia. A native of Toronto, Melnyk, 45, owns the Ottawa Senators of the National Hockey League and is CEO and chairman of Biovail Corp., a pharmaceutical company. He has been a leading international buyer at public Thoroughbred auctions since diving into the horse business in the mid-1990s, and just this year was rewarded with his first Breeders’ Cup victory, a remarkable accomplishment for any owner.

Having only been in the Thoroughbred business for a decade, Melnyk has made enormous strides to a position of prominence in the industry. Some of the greatest accomplishments have come in just the last two years, as runners competing for Eugene and Laura Melnyk have put their owners in the top 10 in the nation by money earned.

A devoted family man, Melnyk has two other passions: hockey and horses. Although a bit warm for ice hockey, Ocala was the perfect location to indulge his burgeoning interest in Thoroughbreds, and the former Mockingbird Farm turned out to be the ideal spot to establish his breeding and training center.

Neighbors and horse lovers alike heaved a mutual sigh of relief when Melnyk made public his intentions to keep the land, now christened Winding Oaks Farm, a working horse farm.

“Mr. Mangurian is a great horsemen and one of the greatest breeders of our time. It’s an honor to step into his shoes,” says Melnyk. “I’m hoping to continue the tradition at that farm, albeit under the Winding Oaks name. I’m committed, as long as I’m around and in the horse business, to keep it as a working farm.

Once Melnyk laid eyes on the former Mockingbird property, he knew that was the farm he needed to own. The old turquoise colors on the barns that represented Mockingbird have been replaced, but the farm was hardly a “fixer-upper.” Paint and a bit of TLC have brought the structures and land back to their former glory. Upgrades to many of the buildings are next on the agenda.

“Eugene wanted a state-of-the-art, first-class racetrack built for the safety of his horses where we can personally find out where they stand before sending them to a racetrack,” notes Phil Hronec, general manager and farm trainer.

“I work all my young horses on the turf at least twice before they got to the race track so we get a better idea of whether they’ll be better on the turf or dirt,” explains Hronec, who trained for 30 years at Southern California race tracks before relocating to Ocala in 1994. He worked for the late John Franks before taking his current position at Winding Oaks.

Unlike Europe, where many races are contested on the grass, in the United States, more races are run on dirt. A knowledgeable horseman can glance at a horse’s pedigree and tell whether that horse was bred to run on the turf or the dirt. Horses, however, can’t read pedigrees, and as is often the case, they can surprise their owners and breeders.

Speightstown, one of the Melnyks’ most outstanding racehorses, was clearly bred to be a champion. The only surprise was that his best year at the races and his greatest victory — winning the Breeders’ Cup Sprint-G1 — came in 2004 when the horse was six years old.

Melnyk paid $2 million for the well-bred colt as a yearling, but Speightstown’s destiny grew questionable when, after a successful three-year-old campaign, injuries and surgery kept him sidelined for his entire four-year-old season. Many owners would have grown impatient and simply retired the horse, but Melnyk told trainer Todd Pletcher to give the horse the time he needed. Patience was rewarded when Speightstown came back as a dominant six year old, winning five stakes races and ending his racing career with a spectacular win in the $1 million Breeders’ Cup Sprint.

“It was probably one of the greatest thrills we’ve had in racing,” says Melnyk.

Retired with earnings of $1,258,256, Speightstown is now in Kentucky where he enters stud at WinStar Farm in 2005. Interestingly, Speightstown was named for a port city in Melnyk’s current home of Barbados. In fact, the Melnyks name all of their horses after streets, places, and areas of interest in the densely populated West Indian island. With the number of horses they currently own, it just might be a challenge to keep coming up with original names from the small country!

Just like the Melnyks’ main home of Barbados, Winding Oaks Farm is indeed an island oasis in its own right. Despite the hustle and continual traffic of SR200, drive through the gates of the 1000-acre farm and you are immediately removed from city life.

Despite the ravages of the 2004 hurricane season that destroyed nearly 100 oaks, the farm is still blessed with many grand old trees. Two natural springs run through the property, and the rolling land affords remarkable vistas and plenty of places to ride and explore. Eugene and Laura Melnyk enjoy riding the property on their own horses and both their young daughters have ponies.

“Eugene is an intense businessman, but when he’s on the farm, he really kicks back and enjoys it,” says Hronec. “The whole family rides horses around the farm.”

Some 700 acres of the farm were once part of historic Tartan Farms, a constant presence at the top of the nation’s leading breeders’ lists for 18 long years before it was dispersed in the late 1980s. Dozens of stakes winners and numerous champions have been raised on this land when it was Tartan Farms and then Mockingbird. At one of the farm’s highest points is a cemetery containing the graves of some of these great horses, including champions Dr. Fager, Ta Wee, Codex, Minnesota Mac, Intentionally, My Dear Girl, and influential Florida sire, Valid Appeal. The sense of history is indeed palpable.

Continuing the tradition of breeding top racehorses is the main objective at Winding Oaks. “I don’t think he’d get a bigger thrill than winning the Kentucky Derby or another major stakes race with a horse he’s bred here on the farm,” Hronec notes. “It will open up a whole new dimension for Eugene and Laura.”

With the top broodmares the Melnyks own being bred to some of the best stallions in the country, this “new dimension” appears to be just around the corner.

The Melnyks spend as much time in Ocala as possible. “I come in and out pretty regularly, at least once a month for a few days,” says Melnyk. “We had to dodge hurricanes, but we were at the farm all of August [2004]. We live in Barbados, but Ocala is our holiday destination. The Ocala area is clean and growing, and there are some great restaurants. We also like going to the off-track betting at Ocala Breeders’ Sales, and my wife loves the shopping. We don’t have basic things like Toys R Us and Wal-Mart in Barbados.”

Great golf is one of Melnyk’s favorite discoveries about Marion County. He has been to several courses and plans to play more of them. Tempted by all the fishermen and boats he’s seen in the area, Melnyk admits his next venture is to find a good fishing hole.

But business and recreation are hardly the only plans on the table.

“We want to do some things to give back to the community,” Melnyk points out. “Ultimately, I’d like to open the farm up to grade-school children tours on a certain day of the week so they can learn about what happens on a working farm. We already have a draft tape of an automated tour that would narrate each stop on the tour.”

With his passion for the sport of racing and a heart for his community, Eugene Melnyk has clearly found a niche in a county that is no stranger to successful horsemen. One can only hope he will stay in the horse business for decades to come.