A local teen with a deep heritage in agriculture will lead the Florida FFA Association in 2020-21.

The ongoing pandemic of 2020 has caused restructuring across platforms including business, education, sports, the arts and healthcare. It also is impacting the historic reign of Marion County’s first-ever president of the Florida FFA Association (formerly Future Farmers of America). 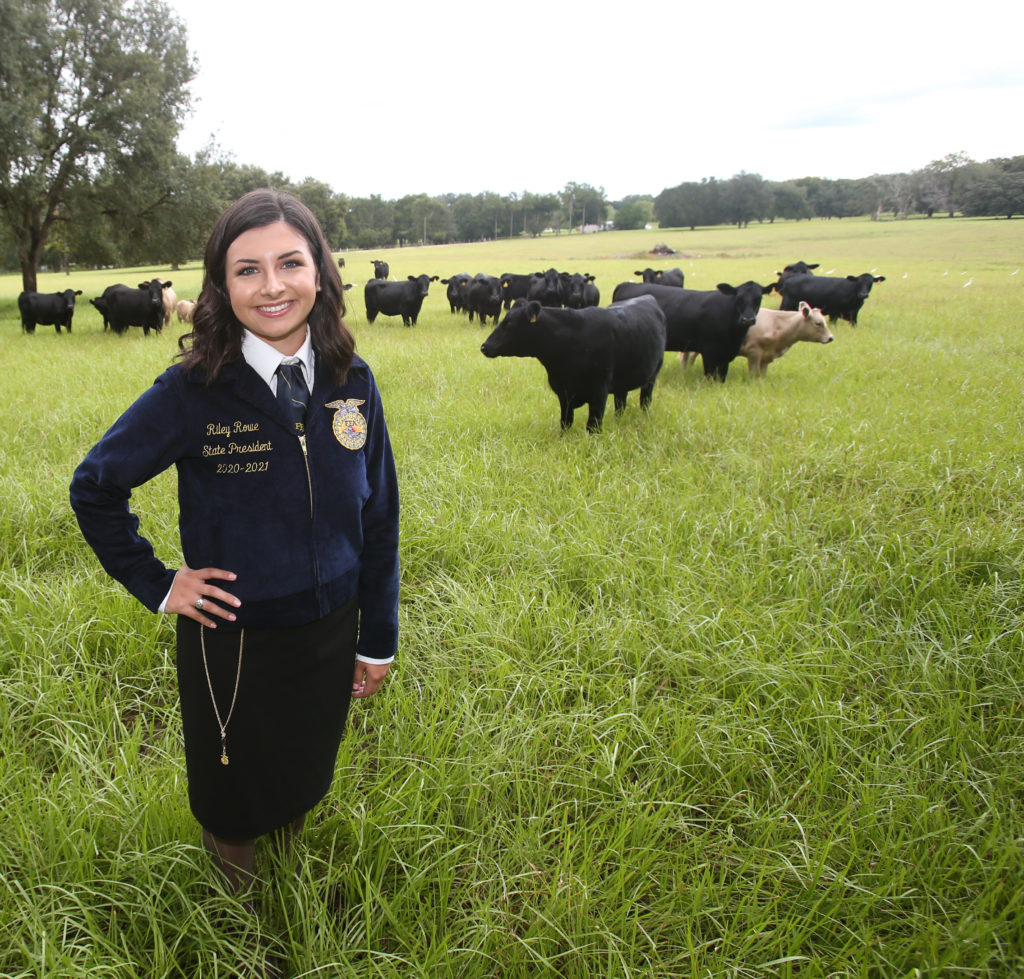 Riley Rowe, 18, of Weirsdale, made history in August when she was named to the top post. There have been other state officers from Marion County, but Rowe is the first to serve as president. Among the changes under her tenure have been a virtual state campaign and the interruption of about 300 days of traditional travel duties expected of someone in the leadership role.

The Florida FFA Association has approximately 30,000 middle and high school student members in more than 300 chapters. The FFA mission is to “make a positive difference in the lives of students by developing their potential for premier leadership, personal growth and career success through agricultural education.”

After graduating from Belleview High School in June, Rowe is taking a year to fulfill her duties as FFA president before she attends Santa Fe College to complete her AA degree and then plans to obtain a bachelor’s degree in agriculture communications from the University of Florida.

She has grown up in an agriculture-based family and has been active in groups such as 4-H, the Southeastern Youth Fair and FFA since she was 5 years old.

“The ag lifestyle and industry sculpted pieces of who I am and shaped what I want my career path to be,” she offers. “I’ve always been around agriculture, but I never really wanted to grow up and be a farmer. I’ve always been interested in the ag communications side, and the journalism and marketing.”

“Agriculture as a whole is something that we all use every day, whether we realize it or not,” she adds. “From the clothes we wear to the foods we eat, everyone can relate to it because it’s something we all use. Being able to speak to strangers who might not know a lot about the industry, but are impacted by it, and being able to find middle ground, that’s something I love about this industry.”

According to Caitlin Bainum, a livestock agent with UF/IFAS Extension, Marion County, agriculture and related industries generate 35,561 jobs, or 24.2 percent of total jobs in Marion County and $1.83 billion in Gross Regional Product (GRP), or 18.8 percent of the GRP.

“The equine industry alone is a $2.3 billion dollar impact annually to the county,” Bainum explains. “Marion County ranks first in the state for equine and 10th for beef cattle numbers. Amongst livestock enterprises, commodities such as peanuts, watermelon, vegetable crops and nurseries are also a mainstay of Marion County agriculture.”

Molly Rowe, Riley’s mother, is a middle school agriculture teacher who grew up in a farming family in Weirsdale.

“I have lived in Marion County my whole life and my husband Ricky is from Marion County,” she says. “We have a lot of family in Marion County. Riley is our oldest of two daughters. Reagan is the youngest. We have always been involved in agriculture.”

Riley says she became active with the Southeastern Youth Fair, the oldest and largest fair of its kind in the nation, when she was 5 years old.

“I was able to do stuff for the younger kids, like the kiddie goat show. Around 8 years old, I started showing beef cattle, and lambs and hogs. In sixth grade, I joined FFA at the earliest age possible,” she explains. “I continued through middle and high school, when I became more competitive. As I got older, I began to focus in on what interested me the most in agriculture and FFA specifically. I’ve always wanted to be a state officer, but I never really understood what goes on behind the scenes and the work that is put into it. I started realizing this was a servant leadership position and a role that I wanted to take on to give back to this organization.”

She was an FFA chapter officer in middle and high school and served as a sub-district chairman, Marion County Federation President and Florida FFA District 5 President.

“I took on more responsibility with each one and gained experience in a leadership position, which prepared me for state office,” she states. “I thought I had the experience and tools that would make me successful.”

The typical two-day screening process for selecting the cabinet, which includes seven officers in addition to the president, was reduced to one day this year because of COVID-19.

“This year it was one day because it was virtual,” Rowe notes. “You go through several practicums, such as personal interview, an ag knowledge interview and an extemporaneous speech. I was one of two who screened the top highest and was able to run for president. Everyone in the state gets to vote for their respective areas and then on president and secretary. I did a couple of weeks of campaigning before our virtual convention and then the votes were in.” 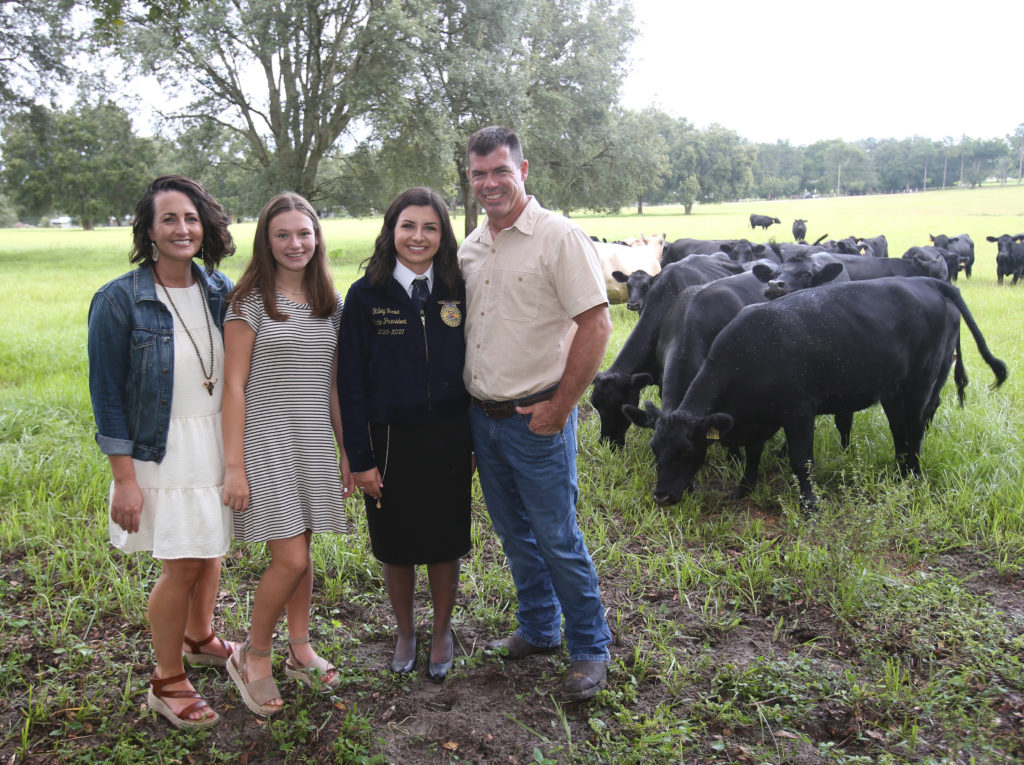 “There is a screening committee for the virtual practicums, around 16 people, and they get past officers, national officers and industry people,” Molly explains. “That committee decides who gets to run for state office and then the students vote for the final outcome.”

Among the duties for Riley would typically have already been a visit to the annual Citrus Expo, which this year would have been held in Fort Myers, and to Washington, D.C., for a conference.

“We did have to do these things virtually this year,” she says. “However, we are hoping in upcoming months we can travel to schools around the state to present chapter programs and workshops. I know a lot of these programs may have to be done virtually, but we’re hoping to do some in person.”

She says that if she were talking, for example, to a group of middle school students, she would enforce that they may not know exactly how they fit into the agriculture industry, but she could guarantee there is something for everyone.

“It can be anything from raising a small herd of beef cattle to working at Publix in the food supply chain,” she offers. “There are a lot of opportunities, but they have to do research and see what is the best fit.”

“I’m a middle school ag teacher and it’s neat that when you get kids who have no agriculture background and they’re not sure they’re in the right place, and not sure that they should try it, but then they find out they don’t have to raise animals,” Molly notes. “There’s a lot of opportunity and the leadership skills they are gaining, no matter what career path they choose, are going to be valuable. And that definitely is unique to FFA. We’ve had a lot of state officers and there are some businessmen and women in this town who have gone on to do some amazing things and they started out as FFA members and state officers.”

“We are super proud of the eight young people who were elected to serve as 2020-21 State FFA officers,” offers Ronnie Simmons, executive secretary/director, Florida FFA Association, Inc. “Riley and her teammates are fantastic representations of what FFA is all about. Each of them comes to us with a heart for service and a passion to make a positive difference in the lives of others, all while representing Florida’s industry of agriculture. For many of us, life over the last six months has had its share of disruptions, but even during this unprecedented time, these young people continue to rise to the occasion and find new and innovative ways to serve and lead. Agriculture is the most basic and most necessary industry in the world, providing the food we eat, the fiber we need, and the natural resources that we depend on. And now, more than ever, the industry of agriculture needs young people who are excited and committed to feeding, housing and clothing an ever-growing world population. We are excited that these young people, along with 30,000 more Florida FFA members just like them, are stepping up to ensure a bright future for Florida agriculture.”