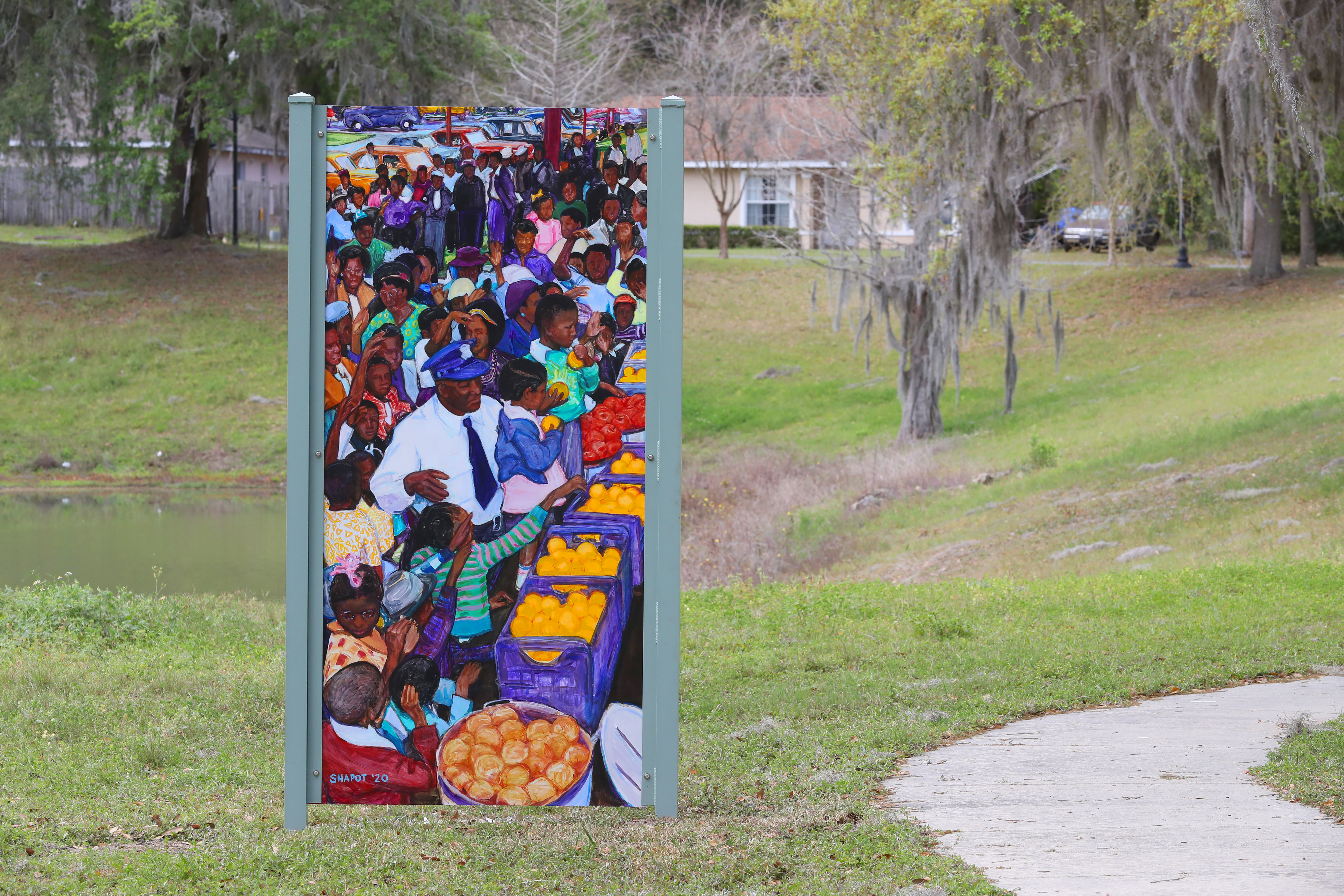 Legacy Park is a small but bright spot of green space in West Ocala. Near the railroad tracks a few blocks northwest of the busy intersection at Southwest 10th Street and Pine Avenue, this tranquil neighborhood park offers a paved walking trail that gently curves for a half mile under a canopy of oak trees dripping with Spanish moss and around the pond historically known as Thompson’s Bowl.

Recently some new artwork was installed, offering another reason to slow down for a stroll in nature: four huge, brightly colored painted mural panels inspired by historical photographs of African American life in Central Florida. Installed along the path by a team from the City of Ocala Recreation and Parks Department at dawn on March 9th, the four aluminum panels are large-format oil paintings inspired by black and white photographs from the State Library and Archives of Florida. 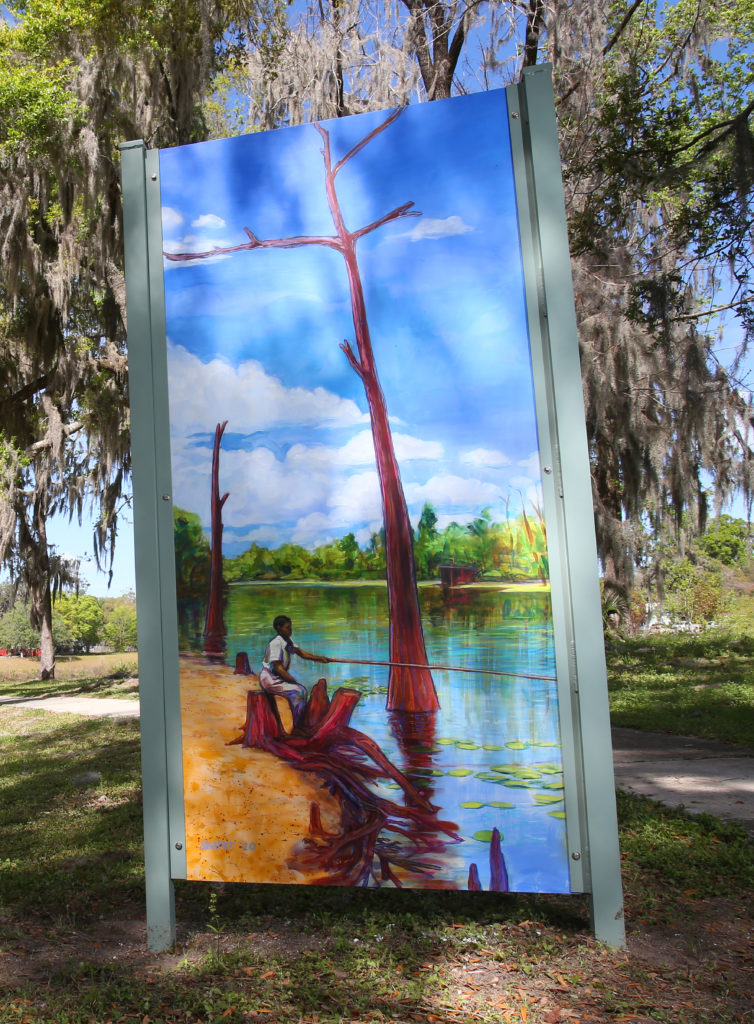 The vibrantly colored scenes celebrate African American life in the region in the 19th and early 20th centuries. Pamela Zeljak, the City of Ocala cultural arts supervisor, explains that this mural is part of a larger effort to beautify Ocala’s public spaces and honor local history.

“About three years ago we decided the area really needed more activation for the arts and culture, and the Levitt [Levitt Foundation AMP Music Series Grant Awards] grant kicked that off,” Zeljak explains. “We started by moving some sculptures to the MLK complex, things the community could enjoy all the time and which enhanced the Levitt [summer concert series] experience. We also added a visual art component to the Levitt art experience during concerts: street artists to paint panels to go in the skate park. While they were building the skate park we didn’t want to keep them in storage so we installed some in Legacy Park. When the skate park was built, we moved them over. Then we thought, what can we do to replace those in Legacy Park?”

In response, the City of Ocala put out a call for a Marion County artist to create new art representing Florida African American history and local painter Jordan Shapot was selected.

“We wanted to complement what was on the mural at Webb Field,” Zeljak explains. “That shows the local history, and this expands into state history. Jordan had really great ideas.” 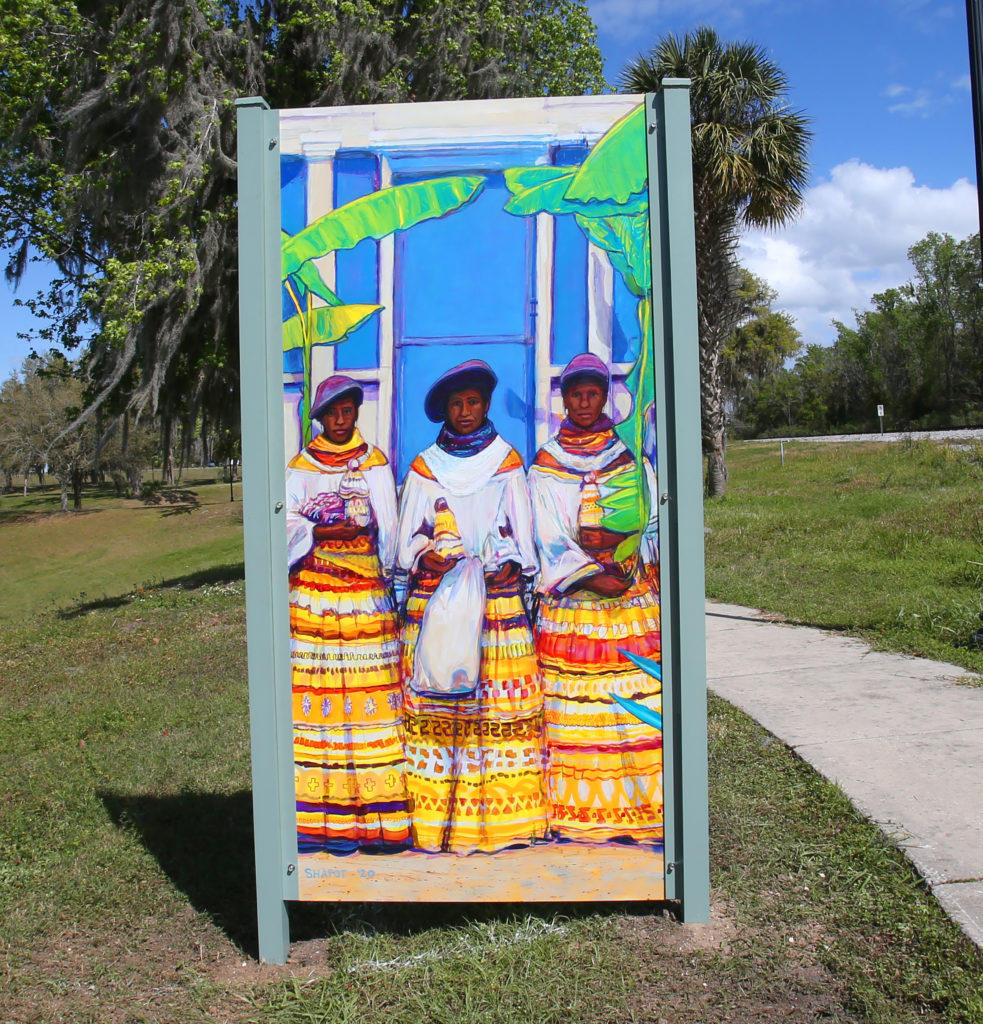 Shapot has a way of seeing the beauty in what he calls “everyday people doing everyday things” in a larger-than-life format. He has always enjoyed studying history, and when he heard about the City of Ocala project, he jumped at the chance.

“I really love art projects when I’m required to do research and some digging around,” he reveals. “It makes me feel much more connected to the subject matter and I think the artwork often turns out to be more heartfelt.”

The four panels he painted in February are scenes of African Americans in everyday life: railroad workers in wide-brimmed hats holding their hand tools; a group of families picnicking at Paradise Park near Silver Springs, with brilliant fresh oranges and fruits; Black Seminole women, with their colorful, full-length skirts and scarves; and a timeless portrait of a young boy fishing from the banks of the Withlacoochee River, among the cypress knees under a bright blue sky. 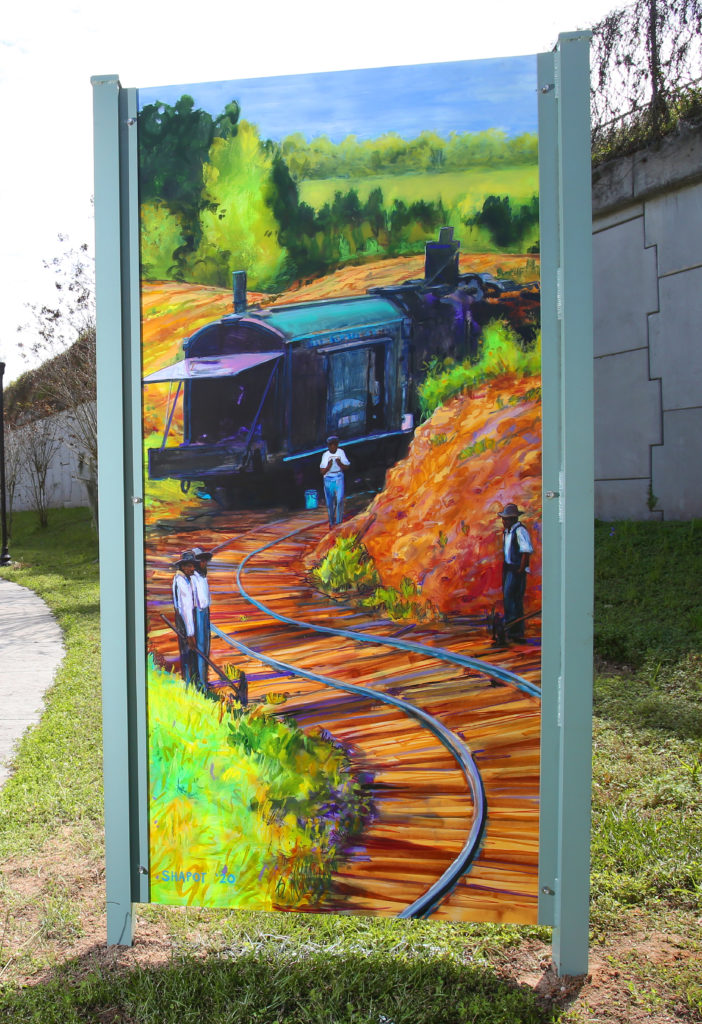 If the other side of these panels looks like graffiti, don’t worry, it is—but it was planned that way. Last year, before Shapot created his paintings, the other side of the panels were painted during an urban calligraphy workshop with hip hop artist DJ Cavem, also known as Vegan Chef Ietef, who, along with a musical performance, demonstrated his art. Shapot says this duality and modern influence further enhances the vibrant culture he wanted to celebrate.

According to a recent editorial in Forbes magazine, street art is no longer rejected as merely deleterious graffiti or vandalism, but can be the source of civic pride, public artistry, and outdoor engagement in cities across America. And they are not the only ones who think so. 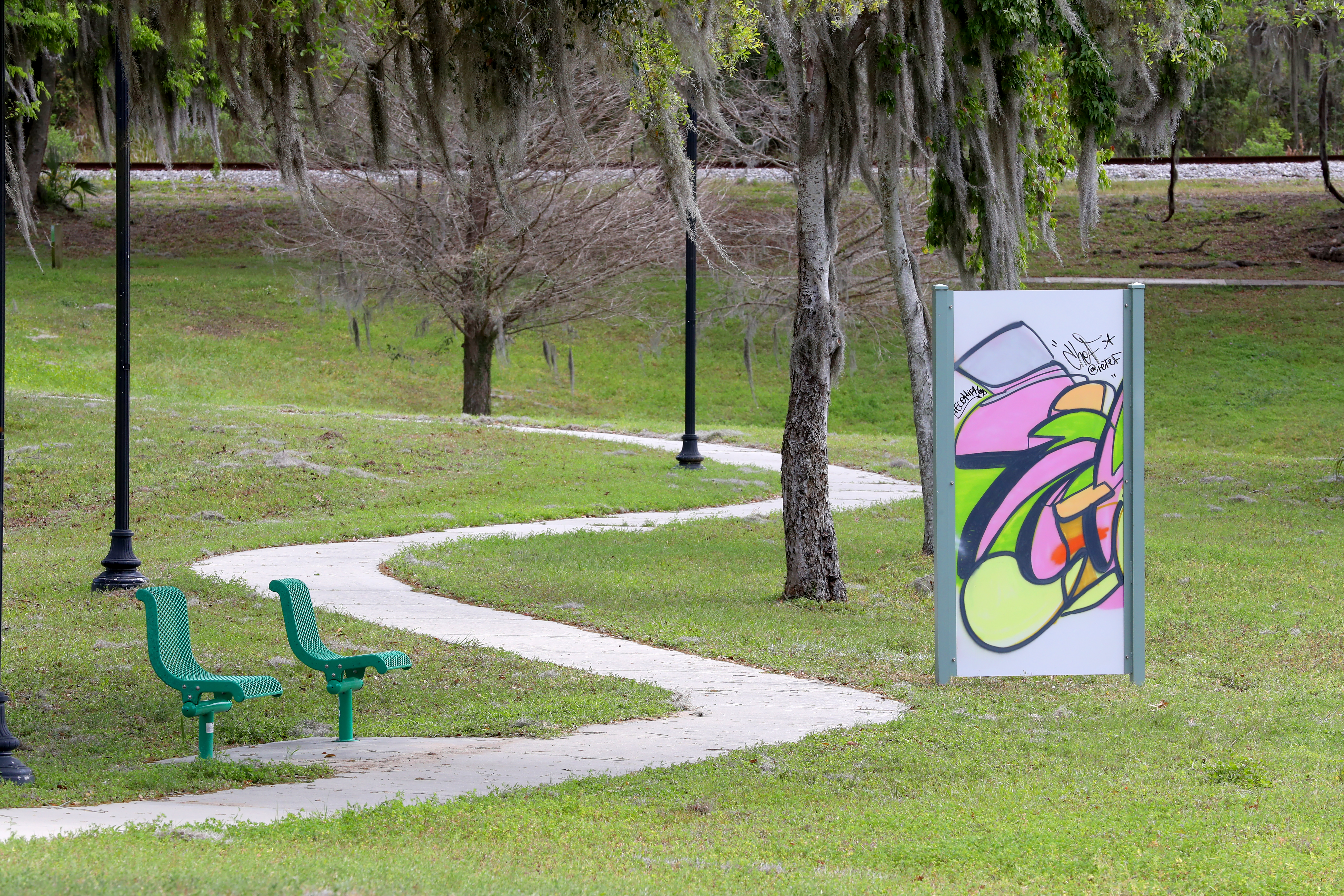 “Graffiti is a rogue art and I believe has its place as part of an expression of free speech,” Maria Stefanovic, director of The Leesburg Center for the Arts, recently told reporters when she made a public appeal for a graffiti artist who uses the tag “Mute” to come forward so she could connect with him on future art projects. “We have no idea who Mute is, but the use of colors are exquisite. I think this individual has a unique perspective of our community, and I want to hear it.”

Stefanovic is just one of many curators and art advocates around the world who are campaigning to develop controlled environments to help foster graffiti artists and create a showcase for their work.

Here in Ocala, the art community is already staging such collaborations—elevating graffiti from an illegal subculture to a legitimate public art form. Last year, the Marion Cultural Alliance (MCA), in conjunction with the City of Ocala’s First Friday Art Walk, staged the workshop Urban Calligraphy: Climate Solutions Through Graffiti Art in the courtyard of The Brick City Center for the Arts, led by eco-minded hip hop personality DJ Cavem, with the goal of educating young people about urban farming, environmental sustainability and food justice.

“Factory farms have destroyed the Amazon rainforest,” Cavem explains. “Pesticides and herbicides have destroyed our soil and microorganisms and contaminated our water. Our oceans are becoming acidic, and we are losing the coral reefs. I believe that art will inspire and educate and change that. And I believe the seeds will be planted, literally.” 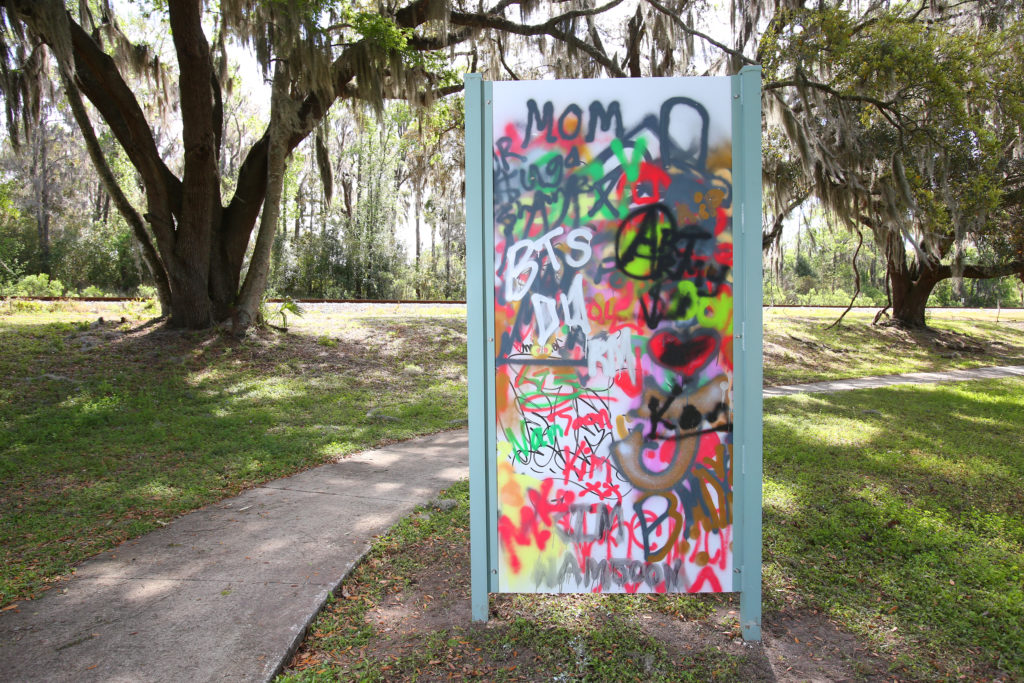 Local young people helped plant those seeds and became a part of creating the artworks that are now on display, literally back to back, with artist Jordan Shapot’s historical murals in Legacy Park.

Cavem not only left his mark on our city, but on the young people he inspired to change the world through art, music and community engagement. Kids of all ages were invited to pick up a can of spray paint and add their own art—a personal “tag” or their design to the aluminum panels. Even Cavem’s medium of choice, Ironlak Sugar aerosol paint, reflected his environmental message—it’s made from sugarcane rather than petroleum to be environmentally and health conscious.

Jaye Baillie, MCA’s executive director, recalls that the event was a vibrant and engaging one. “He was a huge hit.”