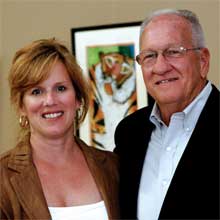 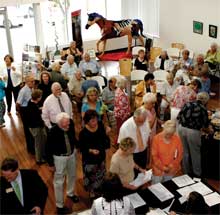 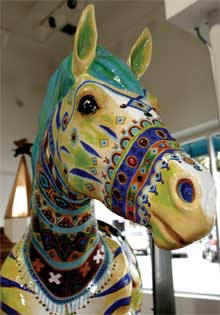 How important is place? If you build it, do they come? Perhaps the essential question is what is lost when you don’t build it?

As Marion Cultural Alliance settled into its new and first permanent home earlier this year at Brick City Center for the Arts — the very place where it was born almost six years ago — the answers to these questions tell an interesting tale of what was, is, and can be.

When Central Florida Community College approached MCA last summer about taking over the lease to Brick City Center for the Arts, the irony was not lost on some of MCA’s founding members, who had been volunteering for the arts downtown in one form or another since 1990, mostly in that very same building.

Known as the Ocala Arts & Sciences Coalition, they supported City of Ocala- and CFCC-backed entities the Discovery Science Center in the old Marion Theatre on Magnolia and Brick City Center for the Arts on Broadway. Returning to Brick City promised possibilities, especially considering the many cultural developments over the last 15 years as a result of like-minded individuals having a place to come together.
Working at Brick City Center for the Arts, OASC volunteers were able to lend time, talent, and treasure to the cause of cultural development in downtown, resulting in the eventual formation of MCA in late 2000.

“I’m very proud to have been involved in the organization in the beginning,” says Rus Adams, a founding board member of MCA and General Manager of Clear Channel Outdoor. “To see the small seed that was planted 15 years ago grow to where it is today is a great feeling.”

MCA’s inaugural effort was Horse Fever, a public art project whose positive economic and civic impact continues to this day. Operating under its stated mission of “uniting culture and community,” MCA reaches into the not-so-artsy segments of Ocala to find partners such as Florida Thoroughbred Breeders’ and Owners’ Association, the Humane Society, the Ocala/Marion County Chamber of Commerce, and others, making them active participants in the arts.

Tangible results can be counted at $1.5 million raised for 24 local charities, including over $600,000 placed into an endowment fund for the arts, and over $100,000 to date in direct grants to the arts community.

“Horse Fever was the vehicle that launched MCA on its mission of elevating the atmosphere for culture in Ocala,” says founding MCA board member Jessica McCune, who came to Ocala via Dallas.

Serving as MRMC’s parish nurse coordinator in her professional life, McCune joined OASC at the behest of a friend and board member, Lori Lockshin.
“I was a docent at the Dallas Museum of Art, so she suggested that I’d like it,” states McCune. “Lori was right. I liked the board members, the commitment to the arts, and the bridge with the Discovery Science Center.”

Looking back reveals more than just organizational growth to Rus Adams. Through his work on both boards, Adams sees a change in his personal view of the arts.
“I have a totally different perspective today,” he says. “Fifteen years ago, I thought art was just something you hung on the wall. Now I see art is a form of expression from an individual that can be shared.”

Adams says working with MCA has expanded his horizons in terms of what constitutes art.
“It’s not just photographs, paintings, sculpture. It’s music. It’s storytelling,” he says with a smile. “I never understood that storytelling was something more than you did before naptime until I heard Jessica [McCune]. It’s the more obscure art forms that need to have an avenue so they may be introduced to other people.”

That Brick City serves as a showcase for new cultural endeavors is a vision shared by MCA Executive Director Cherie Beers.

“Brick City is a place where the arts are at home,” she shares, “where people can come and enjoy the arts in all forms.”

Since coming on board with MCA last year, Beers has seen MCA quickly outgrow its former office at the Ocala/Marion County Chamber of Commerce but is keenly aware of the importance of place for more than practical reasons.

“Everyone who walks in the front door says, ‘Wow! What a great space!’ It’s a signal to the world that ours is a community that cares about the arts.”

Councilman Kent Guinn, viewed as a spearhead on downtown revitalization efforts, was a huge proponent of MCA taking the lease at Brick City.

“When new companies are visiting Ocala, they come downtown,” he says. “We’re right on the edge of becoming a really fine community with a lot more things to do.”
Artist Peggy Watts is pleased that Brick City is in MCA’s hands.

“The artists are delighted that it’s not being totally abandoned,” says Watts, a veteran painter known for her local landscapes and downtown murals. “It would have been a real negative for the city to lose a place downtown of public interest.”

It is built, and they are coming, which as it happens has been a time-honored way for MCA to pick up some great volunteers, most notably founding board member Laurie Menard who, upon moving to town, drove up to Brick City, walked in, and said, “Hi. I’m Laurie Menard and I’d like to volunteer for the arts.” She had plenty of opportunity as chairwoman of Horse Fever in 2001-2002 and as a participant in every project since.
As the city’s renaissance progresses, the cultural scene evolves. Ocala has improved the downtown square, hosting many cultural events of its own while delighting citizens each year with a skating rink in a nearby parking lot. After playing a generous and vital role in the re-development of downtown using art as the tool, CFCC has left to focus on the challenges of its other cultural centers, the Appleton Museum of Art and Webber Center.

For MCA, it seems fitting that just five-and-a-half years after discussion began around a table at The Brick, it finds a home there for the next 20 years.
“I think positive development follows the arts,” Jessica McCune concludes. “I believe in public art — it unites us; it brings the diverse together. We can’t have enough of that.”

Paula King is a former board chairman of Discovery Science Center, Ocala Arts & Sciences Coalition, and a current board member and founding chairman of Marion Cultural Alliance.

Marion Cultural Alliance at Brick City Center for the Arts