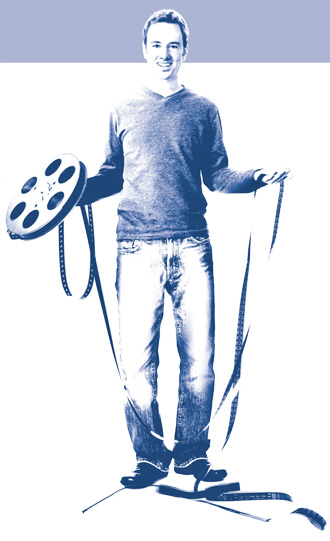 Hitting the open road with (or without) family in tow is as natural a part of summer as the sound of burgers sizzling on a hot grill. But with gas prices pushing $4 a gallon, this may be one summer to leave the family truckster in the garage. Not to worry, though. You can live vicariously through one of these noteworthy films about that great American tradition—the road trip.

Long Way Round (2004)
Imagine driving from London to New York, by heading east 20,000 miles—on a motorcycle! Actor Ewan McGregor and his best bud Charley Boorman take a cameraman along with them to document this amazing journey. It’s not reality TV, and not a documentary, but a true adventure that seems impossible to pull off. Indeed, there are moments where it looks like they will have to surrender to nearly impassable stretches of land across Mongolia and Russia. Ewan and Charley encounter everything from the Russian mafia and orphans who live in sewers to bears, gunmen, and a host of other characters. Funny, inspirational, and heartwarming at times, there’s never a shortage of pure adventure. The first episode in this seven part series spends a good deal of time showing the preparation involved in this journey—you may want to skip it and start with episode two.

National Lampoon’s Vacation (1983)
Anyone who’s ever been forced to sit in a cramped car with their family on a cross-country trek will relate to the misadventures of the Griswold family. Chevy Chase is at his finest in his role as Clark Griswold, the well-meaning father who just wants his family to shut up and have a good time. Though there have been many family road trip movies since “NL Vacation,” none stack up to the original. If you haven’t seen it, or if it’s been a while since you’ve seen it, rent it and be prepared for non-stop laughs. Then you’ll know what people mean when they talk about Family Trucksters, Wally World, or The Griswolds.

Planes, Trains and Automobiles (1987)
While most road trip films are about heading to a destination, this one is all about getting home. Steve Martin plays a stiff advertising executive who just wants to get home to see his family for Thanksgiving, but ends up spending three hilariously agonizing days on the road with an unwelcome traveling companion, played by the late John Candy. Anyone who’s been stuck on a long flight next to a chatty, obnoxious passenger will relate to the tension. This film is like The Odd Couple on wheels—but funnier!

Wild Hogs (2007)
I can’t leave out hometown celeb John Travolta’s midlife crisis film that caused such a stir last year during its premier in downtown Ocala. Sure, the plot is predictable, and the laughs are kind of corny a lot of the time, but I found myself drawn to the endearing cast (Travolta, Tim Allen, William H. Macy, and Martin Lawrence). If you ride a bike, or feel like you’re going through a midlife crisis, you’ll enjoy this light comedy. If you’re looking for clever, witty laughs, look elsewhere. Don’t miss the extra Extreme Home Makeover scene played during the credits at the end of the film—it’s one of the funniest parts of the movie.

Style Editors Dean Blinkhorn and Amy Mangan and Creative Director Trevor Byrne have many opinions on music, books, and movies, respectively. This special rotating column highlights a different writer and a different topic each month. Agree? Disagree? Have something to add? Drop us a line at mediafile@ocalastyle.com or mediafile@lakeandsumterstyle.com and we’ll print the best responses in the next issue. Next up: Our column goes to the dogs with Amy’s dog-lit picks.