America is fortunate—we’ve never been invaded and there hasn’t been a war on our soil since the Civil War. Much of the world, especially Europe, saw the ravages of war first-hand during the 20th century. Perhaps this gives foreign filmmakers a unique perspective. Here are three foreign films that use war as a backdrop, but not as the main story. The battles fought in these movies aren’t won with guns and grenades—they are testaments to the human spirit during the most trying of times. They’re subtitled, but the acting is so good that you’ll soon forget you’re reading. 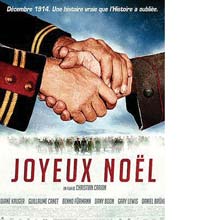 It’s Christmas, 1914, and troops from Germany, France, and Scotland have been pummeling each other with artillery and gunfire. During a break in the fighting, a lone German soldier steps out of his trench, singing a Christmas carol, and places a small Christmas tree in the center of the battlefield. Moved by his spirit, officers from each of the opposing armies agree to a cease-fire for the evening. It isn’t long before the soldiers join together in merriment, swapping sips of booze, and sharing chocolate while showing each other family photos.

Sound like a silly, improbable Hollywood musical? Believe it or not, it’s a true story! You have to watch this film to find out what happens in the days following. It’s a truly moving tale that I’m surprised hasn’t become a holiday classic.

Set in the aftermath of the Spanish Civil War (1944), Pan’s Labyrinth reflects the nightmares of a 10-year-old girl, Ofelia, who finds herself in a difficult position. Her father is dead, her pregnant mother is ill, and her new stepfather is a cruel captain of the Spanish army, sent to squash the remnants of resistance fighters hiding in the surrounding forest. Ofelia finds an uncomfortable, yet irresistible escape through a fantasy world where bugs become dark fairies. She is told by a sinister, goat-like creature to complete a series of mysterious tasks in order to claim her throne as a princess in his underground world.

The spooky special effects and disturbing creatures are the main attraction, but director Guillermo del Toro does a wonderful job of weaving a story that ultimately shines a light on the human characteristics of loyalty, pride, and justice. One caution, though—this is a fairy tale for adults. The level of violence and intense imagery is simply too graphic for children. 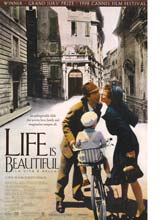 Imagine a film that starts off as a light-hearted comedy set in 1930s Italy. Then, an unexpected turn drops you off in a World War II concentration camp.

Life Is Beautiful isn’t a film about the holocaust. It’s a sweet tale of a father trying to protect the innocence of his young son the only way he knows how—by pretending it’s all just a game. Roberto Benigni directs and stars as Guido Orefice, a Chaplin-esque waiter who proves that love, imagination, and humor conquer all. While most of the film is charmingly funny, the real payoff is the tear-jerker of a conclusion.

Although an English-dubbed version is available, opt for the original Italian version with English subtitles to fully appreciate Benigni’s masterpiece.

Style Editor-In-Chief Dean Blinkhorn and Art Director Trevor Byrne argue frequently about music and movies, respectively. Sometimes, they even agree. This special alternating column highlights some of their recent discussions. Do you have something to add? Drop us a line at mediafile@lakeandsumterstyle.com or mediafile@ocalastyle.com and we’ll print the best responses in the next issue. Next up: Dean suggests the ultimate “Revenge Of The ‘80s” list.