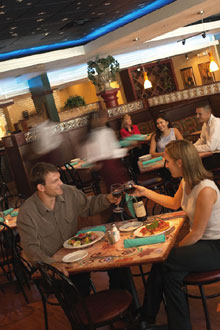 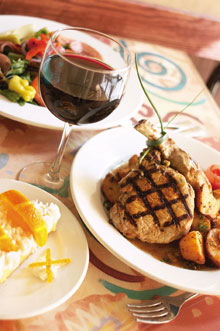 As a child, Pete Palmere spent many hours in the kitchen with his mother and sister as they prepared the family meals. He remembers the tantalizing aromas of simmering sauces, the festive colors of a wide assortment of fresh produce, and the warmth and love of that nurturing environment. As the owner of The Bistro Mediterranean Grill, the recently opened restaurant next to Barnes & Noble on SR 200, Palmere wants to share that same quality food and warm hospitality with his patrons. Many of the recipes used in the restaurant come from his mother’s kitchen, so it is a very personal matter to him that the public enjoys the food.

The atmosphere at The Bistro Mediterranean Grill is homey in the sense that it is low key and casual, intimate without feeling crowded. The ceiling of the main dining area is painted to resemble a night sky with stars, lending the room a sense of authentic al fresco dining. My favorite memory of Mediterranean dining is that of eating under the stars in the garden of a taverna near Daphne, Greece, with the aroma of night-blooming flowers flooding the air. I hope Palmere will play up that type of atmosphere.

The Bistro Mediterranean Grill offers a choice of table or booth seating, with the booth tabletops featuring an abstract design, giving a nod to a more sophisticated ambiance. The Italian sayings painted on the walls add to the effect.

“We define ourselves as a ‘casual-but-classy,’ bistro-style restaurant,” Palmere explains.

My husband Barry and I started with an appetizer medley that included Sausage and Peppers, Mediterranean Mezze, and two types of Bruschetta Rustica.

Sausage is a favorite of mine, and the sweet Italian ones in the Sausage and Peppers are freshly made on the premises, and they are exceptional. Apparently, I’m not the only one who thinks so as Chef Haynes relates that one customer tried to buy them uncooked and by the pound to take home.
They come in either a red or white sauce. We had the red sauce that complimented the sausages without overpowering their flavor.

The Mediterranean Mezze is truly four-star. Roasted red peppers and Greek olives put this hummus out of reach of traditional recipes. It is served with baked pita triangles that do not interfere with the other distinct flavors.

I particularly liked the bruschetta that paired cucumbers and fennel with the tomatoes and herbs, but the traditional tomato and herb bruschetta was delicious as well.
—

The first entrée we tried was the Bistro Steak Salad that can be ordered either at lunch or dinner. It consisted of a salad of fresh greens, gorgonzola, and tomatoes, topped with grilled sirloin. The sirloin is marinated in red wine and rosemary and may be cooked to taste, and it is served with a choice of dressings. The meat was very good, and this entrée is perfect for anyone on a low-carb diet.

The second entrée we tasted, Pollo Parmigiano, was divine. Instead of the usual chicken cutlet topped with a heavy red sauce and lots of cheese, this version consisted of scallops of chicken breast topped with a garlic, basil, and pancetta cream sauce. Cream sauce usually means heavy, but this was light, delicately flavored and delicious.

We did not get to taste The Bistro Mediterranean Grill’s signature Roasted Eggplant and Sun-dried Tomato soup, but Rick and Traci Perkins, who like us were eating at The Bistro for the first time, said it was very good. The couple also enjoyed the Pollo Picata (Marsala) and the Putanesca Ala Edna, a mixture of scallops, shrimp, littleneck clams on penne pasta in red sauce with olives and anchovies. The Perkins said they would definitely dine again at the restaurant.

The Bistro Mediterranean Grill’s motto is “Good Food — Fine Wine — Real People” and Pete Palmere believes they have a good wine selection that complements the food. I had S. Pellegrino sparkling mineral water instead of wine, but Barry’s family’s business was liquor distributing and he believes that the choice was good in both the reds and the whites, with a range from dry to fruity in both.

Now to my favorite part of any meal, dessert! We shared an Orange Dreamsicle, a dream of a cool fresh orange taste, reminiscent of creamsicles on a stick, and topped with fresh whipped cream. The Fudge Torte, a mixture of white and dark chocolate in layers with a hint of raspberry, was also delicious.

Owner Palmere says that, like any good restaurant, the menu at The Bistro Mediterranean Grill is a work in progress. Even though the menu now features several dishes with Greek influence, such as the Mediterranean Mezze, The Baccola Di Fritti (salt cod fritters), and Grecian Salad, he hopes to add other dishes from various Mediterranean countries in the near future.

To add to the dining experience, Palmere recently engaged a classical guitarist and a jazz sax and guitar duo to play on separate evenings during the week. (Call for days and times.)

The prices at the Bistro Mediterranean Grill are comparable to other non-corporate restaurants in the area, and they are in the mid-price range. My overall dining experience at the restaurant was definitely positive, and I will recommend it to my friends.

And despite the appeal of night-blooming flowers, it’s certainly much more accessible than a flight back to Daphne. No passport required.

Jean Crossman Gilman is a freelance writer, photographer, and artist from northwest Marion County. She received her BA in English Literature from UNC-Chapel Hill where she also completed the school’s prestigious creative writing program. She can be reached at jean@ocalastyle.com