TV shows like Dancing With the Stars and So You Think You Can Dance are bigger than ever. So, it seems, are ballroom dance classes. People everywhere are catching Dance Fever, including one very young Ocala resident—six-year-old Natasha Overcash. 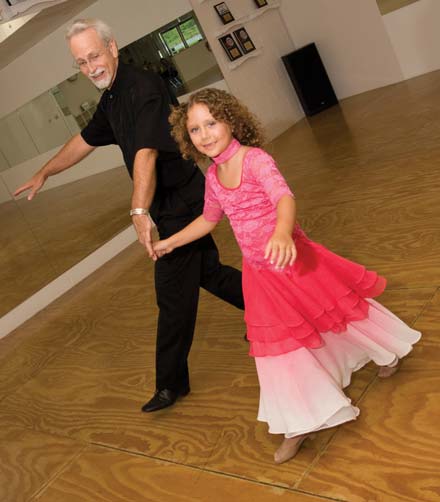 Natasha practices a new step with her teacher, John Whipple.

When she was three, Natasha began taking ballet and tap lessons at a local studio. “She loved it,” says her dad, Dr. Todd Overcash.

“She hated it,” reports Lori.

Then, when she was four, Natasha saw Dancing With the Stars on TV.

She was enthralled. She told her parents she wanted to learn to dance like that, and soon she was enrolled to begin classes with John Whipple, at Dancin’ Around Studio in Ocala.

Even though she was the youngest student he has ever had in his many years of teaching, John remembers he was impressed right away with the tiny girl’s enthusiasm.

“Natasha is special because she really wants to dance,” he says. “If a child’s mother is the one who actually wants them to do it, it usually doesn’t work out very well.”

A few months after she started her ballroom lessons, Natasha entered her first dance competition in Orlando. She was the only one entered in the ages 6-10 class (yes, she won), but the event provided a first taste of what it is like to perform in front of an audience and judges. 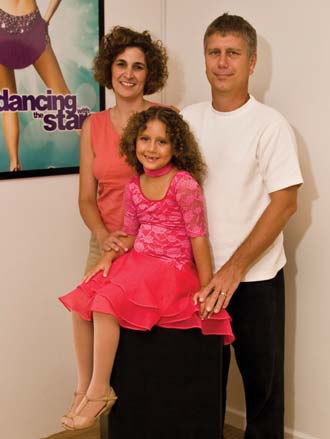 Six-year-old dancer Natasha with her parents, Lori Foultz
and Dr. Todd Overcash, both of Ocala.

Then came a second dance challenge, this time with competition. There were four entries in her age class this go-round; Natasha came in second to a much older contestant.

“I had butterflies in my stomach, but when I placed second they went away,” she remembers.

Her mom says she loves to compete and spend time with the other kids she meets at the dance challenges, which are presented all across the country. She recently placed second overall at “Halloween in Harrisburg,” a competition held in Pennsylvania. She won six gold medals at the event, along with one silver medal.

Winning is nice, but it’s not the most important thing to her parents.

“Most of all, she’s having fun,” says her dad. “That’s what really matters.”

Natasha has a full dance card off the floor as well. She loves school (she’s an enthusiastic first-grader at Cornerstone School in Ocala), loves to read, and loves to ride her horse, “Sassy.” 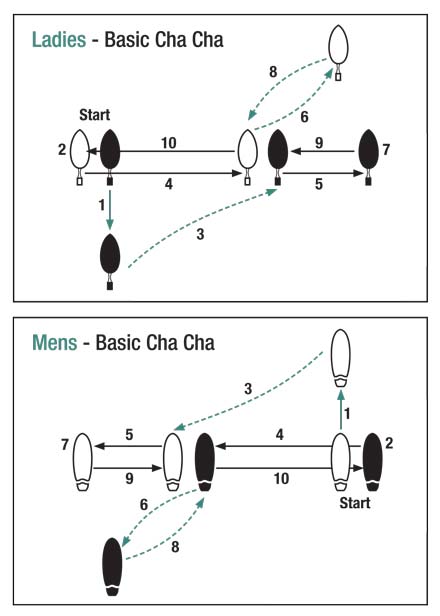 Every Friday afternoon, Natasha takes an hour-long class at Dancin’ Around. She knows more than a dozen dances now—from the foxtrot and night club style dances to Eastern and Western Country Swing.

“I think her best dance is the cha-cha,” says John, her teacher. “But she says she enjoys the rumba the most.”

John explains that each dance requires different skill sets, and likens learning various ballroom dances to learning to cook various types of cuisine. He notes that while some adult students may take an hour to learn a new step, Natasha can learn a new one in a matter of minutes.

He believes dancing is a near-perfect activity for children and their families. In addition to the social fun of getting together with kids with the same interests at dancing events, it’s also a very safe activity. “It’s a wholesome atmosphere,” he says, “and it’s a lot safer than most sports.”

Watching Natasha twirling around the floor following John’s lead, we asked her parents if she took to it naturally because they themselves are dancers.

Lori says she herself took ballet and tap lessons as a child, and earlier this year began tak-ing ballroom lessons herself. Now, when she goes to competitions with Natasha, she competes in her own adult age group. (She recently won her class at the Pennsylvania event.) 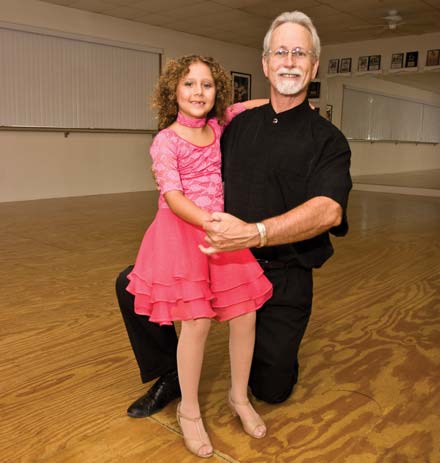 Natasha is John’s youngest student ever. He says her enthusiasm
more than makes up for her young age.

Back at the Dancin’ Around studio, Todd Overcash watches as John spins his daughter around the dance floor again. She’s smiling a big smile.

“Twirling is her very favorite part,” says her dad. “She’s always ready to come for a lesson.”

“It’s even much funner than I thought it would be!” says Natasha.