As predicted, Alydar and Affirmed left the starting gate together and ran stride for stride for nearly every yard of the
mile-and-a-quarter race. The thunderous crowd went insane. For two minutes, the fans screamed just two horses’ names: Alydar! Affirmed! 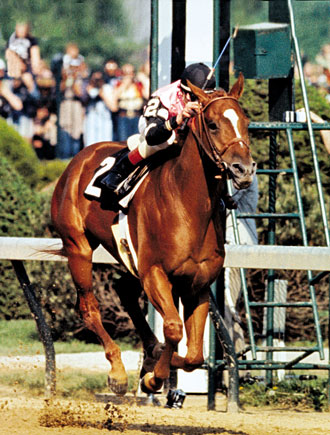 On the first Saturday in May of 1978, Ocala’s Affirmed beat Alydar
in the Run for The Roses. He remains the last horse to
win horse racing’s coveted Triple Crown.

Fifty yards from the wire, Affirmed began to edge out in front. Alydar never gave up, but Affirmed wouldn’t give in.

There is a dirt oval within the city of Louisville, Ky., and 30 years ago I wanted so badly to be there on the first Saturday of May. My ticket to the Kentucky Derby, the mecca of horse racing, was a job with trainer Don Devine and his jockey-wife, Dianne Crump. Dianne was the first female jockey to win a race in Florida and Don was a solid Kentucky horseman who had a dozen stalls reserved at Churchill Downs and needed a rider.

I needed a working vacation.

The town of Louisville was Derby-crazed! Everyone from 8 to 98 was following the favorites and debates over fried chicken and biscuits focused on two mighty three-year-old steeds, Alydar and Affirmed. Both horses were bronze chestnuts and were already glorified by their achievements. Affirmed, from Ocala, had been honored in 1977 as the North American champion two-year-old colt. Alydar played second fiddle to Affirmed all that year, but was the darling of the bluegrass crowd.

Two weeks before the Derby, Alydar proved their point by winning the
Blue Grass Stakes at Keeneland Race Course in Lexington by an astounding 13-1/2 lengths. It was a knockout performance that scared off more than a few Derby hopefuls.

Affirmed was tuning up for the Derby with a West-coast campaign. Affirmed and his human associates represented America’s hardworking, get-up-early-and-get-to-work ethic. Louis Wolfson, Affirmed’s owner and builder of Harbor View Farm in Ocala, was the entrepreneur son of a scrap metal dealer. Lou believed Florida was America’s land of sunshine and opportunity. The flamingo sewn onto the back of Harbor View Stable’s black-and-pink racing
silks flew down many a track to the winner’s circle.

Laz Barrerra, Affirmed’s trainer, was a refugee of the chaos created by Castro’s takeover of Cuba. Barrera proved his worth as a trainer in the U.S. and guided Affirmed through an unbeaten two-year-old career. Jockey Steve Cauthen, a slender youth with a choirboy demeanor, hooked up with Affirmed and trainer Barrera at Saratoga in August 1978, the day Steve guided Affirmed to victory in the Sanford Stakes. Affirmed’s regular jockey, Angel Cordero, had decided to ride another mount in that race. 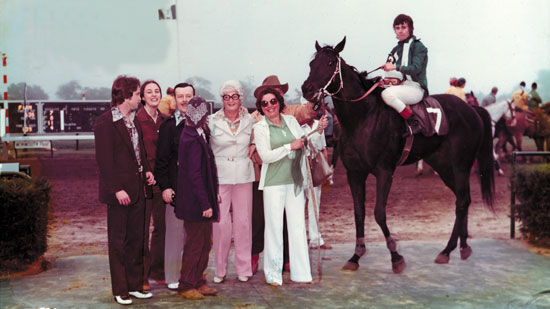 After the Sanford Stakes win, Barrera gave Cordero the boot and Steve Cauthen began the ride of his life.

As I watched Affirmed step stoically off of the van that delivered him to Churchill Downs the week before the Derby, I was amazed by the grace of his appearance. And he was smaller than his adversary, possibly a hundred pounds lighter than Alydar.

On the morning of the 104th running of the Kentucky Derby, I was already going at 4am. I galloped horses at dawn with butterflies in my gut every time I rode down the stretch to the wire. I decided I wanted to get close to Affirmed.

The assistant trainer’s badge that I proudly wore allowed me to visit Affirmed at the stakes horse barn.

I preferred cool over cocky and I was leaning toward Affirmed. But most of the hardboots of Kentucky kept echoing one sentiment. The giant Alydar, they said, would intimidate the slighter Affirmed and be in front at the finish line.

Or so they said.

Perhaps the pink wind-breaker I wore made me appear to be a member of the Harbor View stable team. The stout trainer Barrera wore a light tan tweed suit and puffed nervously on a big Cuban cigar as Affirmed was bridled. I had the nerve to stride down the track along with Affirmed’s entourage as it left the barn and made its way to the saddling paddock. I carried a modest 35mm camera with me, and as Affirmed and his team walked nonchalantly along, I snapped his picture. In the moment that followed, I swear Affirmed looked me square in the eye and nodded in affirmation. This was a thumbs-up sign from a horse if I ever saw one! All of my money went on the number two horse to win.

The Derby win pictures show Affirmed won by a length and a half, his neck fully stretched out as if reaching purposely for the finish wire. Steve Cauthen’s whip was cocked but still those last few yards. Those fans who bet on Alydar tossed their losing tickets not in disgust, but in awe. They understood the magnitude of courage they just witnessed. The horse with the biggest heart won the red roses that first Saturday in May of 1978.

Affirmed would later win the Preakness Stakes and the Belmont Stakes, sweeping what is known as Thoroughbred racing’s Triple Crown in the summer of 1978. Thirty years later, Affirmed is still the last horse to win that rarest of Thoroughbred racing prizes. I am so honored to have met him.

And I have the picture to prove it.

Affirmed
by the numb3rs