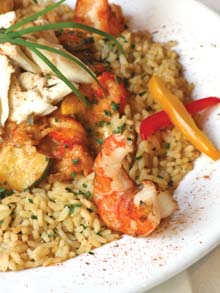 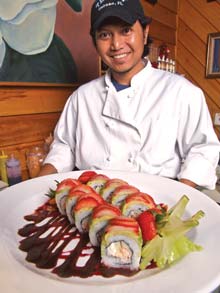 Sometimes the most memorable discoveries are where you least expect to find them.

Such is the case with Blue Water Bay, a locally owned restaurant in Melrose, the quaint little town directly east of Gainesville known for its scenic lakes. For months, I’d been hearing about their fabulous food, so I decided to make the drive and discover what all the fuss what about.

It only took one meal to make a believer out of me. The service is great and the food rivals what you would hope to find in a much more expensive, big-city dining spot. I have to wonder if Blue Water Bay is one of the reasons Gator football coach Urban Meyer just bought a home nearby.

“There have been a lot of changes in this area,” says owner Byron Terwillegar, a genial soul with a passion for great food and fine wine. “We’re jammed here during football season.”

Don’t be deceived by the casual exterior and dirt parking lot. You can’t judge this book by its cover. As soon as you walk through the door, the gracious greetings, linen tablecloths, and upholstered high back chairs are the first hints you’re in for a treat. Trust me. Blue Water Bay is worth every minute of the drive from Ocala.

The establishment has been located in Melrose since the 1960s, first as a “pretty tough bar,” then as a restaurant. Terwillegar, who grew up in town, purchased Blue Water Bay in 1994 and reopened it in 2003 after a fire burned it to the ground in 2001.

Terwillegar describes the cuisine as “quality Southern food with a Cajun touch,” but that doesn’t really do justice to the inventive dishes that come out of his kitchen. Lest you envision platters of fried chicken and heavily spiced jambalaya, let me assure you the creative appetizers and entrees here celebrate the freshest of Florida seafood, regional dishes, and locally grown produce.

I love it when a restaurant’s appetizer menu is as large as the entrée section. The Grilled Mango & French Brie Quesadilla is a popular number, as is the Fresh Florida Fighting Gator Tail with swamp sauce. You may want to try the Smoked Duck Quesadilla or dive into the Florida Blue Crab and Roasted Artichoke Cheese Dip.

But if you really want to sample Blue Water Bay’s ingenuity, ask about the day’s appetizer specials. When we visited, I was blown away by the Curried Cheese on Bruschetta accompanied by tender grilled pineapple and organic locally grown blueberries. The smoked salmon with Peruvian asparagus and fresh cherry tomatoes that have never known refrigeration was nothing short of incredible. No wonder patrons who say they’ve never liked salmon come back begging for more of this.

Terwillegar recruited Dido, also referred to as “The Sushi Master,” from Southern California and patrons have been happy beneficiaries of his talents ever since. It’s recommended that you put in a sushi order early in the evening on busy nights.

Realizing that “sushi virgins” may be intimidated by the thought of indulging in raw fish, Dido has come up with a number of incredibly tasty dishes that incorporate baked fish. In fact, about half of the sushi menu is not raw. We raved over his baked Wahoo roll, which also featured tender crab and cream cheese. If you’re not an expert with chopsticks, ask for “cheater chops,” a clever little device that enables even first-timers to eat like a pro.

Amazingly, this small-town establishment boasts a deep wine list that is one of the finest and most extensive in the southeastern United States. No wonder Blue Water Bay has won Wine Spectator Magazine’s Award of Excellence four years in a row.

Selections are helpfully arranged by color, characteristics, and price instead of by regions, making it much easier to decide what to order. Or you can always do as we did and ask Terwillegar to make recommendations according to what you’re ordering. The man definitely knows food and wine, and takes great pleasure in pairing them to bring out the best in both. He turned us on to AMON-Ra, an incredible Australian Shiraz that complemented our appetizers perfectly and left us craving more.

Make sure to ask your server about the daily specials before making up your mind. The menu offers a number of top-selling entrees, but Terwillegar likes the challenge of coming up with something out of the ordinary and frequently features fresh fish in the specials.

Perhaps the biggest seller on the entrée menu is the Blue Water Bay Famous Fried Shrimp. One hundred percent free of chemicals, the shrimp is delicately battered and flash-fried in pure peanut oil. The result is so light and delicious that you can skip the cocktail sauce.

“We get a lot of shrimp fanatics here,” says Terwillegar.

Another huge seller is the Cajun Crawfish Etoufee. Add a side of Red Beans and Rice and you’ve got some serious Cajun cooking going on.

“People eat this and ask us what part of Louisiana we’re from,” says Terwillegar with pride.

In the South, many places serve their seafood fried, and while Blue Water Bay does this beautifully, they also offer broiled, grilled, blackened, and sautéed dishes.

Seafood draws many patrons to Blue Water Bay, but it’s hardly the only thing on the menu. The U.S.D.A. Prime Sirloin comes in three sizes and is a popular entrée, as is the Rosemary Roasted Prime Rib. There are numerous entrees to choose from and the five-course meals are sure to be memorable.

Portions are generous, to say the least. “We never went to portion control school!” says Terwillegar with a laugh.

Entrees are served with house salad and your choice of side. We loved the tasty sweet potato fries and couldn’t get enough of the red beans and rice.

No matter how pleasantly full you are, there’s always room for a slice of Sour Orange Pie for dessert. I was doubtful I could eat anything else after dinner, but one bite of this cool creamy concoction changed my mind. The tartness of the orange is marvelously balanced by a very thin layer of chocolate on top. No wonder the Travel Channel’s popular Taste of America show hosted Mark DeCarlo recently visited to do a television segment specifically on this dessert.

Other desserts made in-house include Key Lime Pie, Carrot Cake, and an absolutely decadent Chocolate Kahlua Mousse Bombe. Dido can even whip up a “sushi” dessert if you ask. We enjoyed his “Last Call Roll,” a creative combination of mango, pineapple, avocado, cream cheese, strawberries, and rice with a delicate chocolate-raspberry sauce.

After my experience in this delightful restaurant admittedly off the beaten path, I have no doubts it can satisfy sophisticated palettes, die-hard Southerners, and Cajuns equally well. While I don’t fit into either of the latter categories, I do believe my palette has become a bit more sophisticated.

Thanks to Blue Water Bay.

If you’re making the trip to Melrose on the weekend, plan to stop in at the Melrose Bay Art Gallery just up the road. This unique co-op gallery highlights some of North Central Florida’s finest artists and fine craftsmen. The four-room venue devotes one room to monthly shows and the other rooms to ongoing group shows. Call for hours.