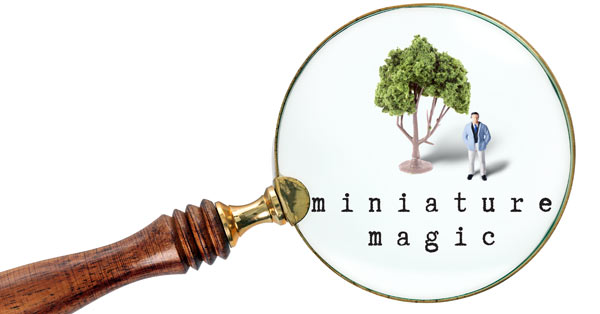 Some hobbies are a passing fancy, good for a few years until something more interesting comes along. But passion? Well, that’s another thing altogether.

For miniature artisan Lloyd Cooper, 65, his passion for building intricate miniatures has only grown stronger through the decades. Not only has it brought pleasure over the years, but his craft has been one of the sustaining joys in a life that has seen more than its fair share of difficulties.

Lloyd first discovered miniatures at age 13 when he began building scale model cars, a hobby he still pursues. He then branched out into model railroading, first working at 1/87th scale but even doing some work as small as 1/144th scale.

It was while creating the tiny buildings to complete the villages for his model railroad projects that he realized how much he enjoyed that aspect of miniatures.

In the 1980s, Lloyd saw 1/12th scale miniatures (also known as “one inch scale”), for the first time. Intrigued with the possibilities of working in a larger size, he began studying and reading everything he could find about this scale, including attending miniature shows.

Lloyd got serious about his miniature artistry in the 1990s. He joined the International Guild of Miniature Artisans and is also a member of Artisans in Miniature International, an organization that is based in England. His work was even featured in their magazine this summer.

Lloyd joined the U.S. Army in 1966 and ended up doing two tours in Vietnam from 1967 to 1969. He served on Huey gunships, the big turbine-powered helicopters, which first saw combat operation during the Vietnam War. While serving his country, Lloyd was shot down twice; the second time, he was wounded and was discharged in June 1969. When he returned home, it was as a disabled veteran.

Several years after he left the jungles of Southeast Asia, Lloyd was diagnosed with Reiter’s Syndrome, an autoimmune condition also known as “reactive arthritis,” caused by his exposure to Agent Orange during his time in Vietnam. His prognosis was grim; doctors said he’d never walk or use his hands and would be permanently disabled.

Amazingly, Lloyd proved those doctors wrong and recovered well enough over a period of three years to enroll at the University of Southern California to pursue his college career. He graduated in 1979 with a bachelor’s degree in architectural engineering. 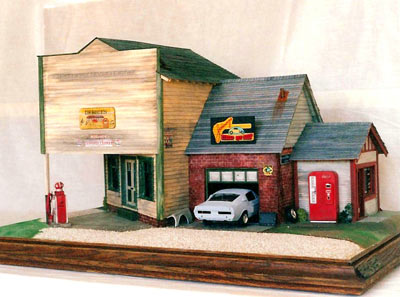 As happens with many veterans, the unspeakable horrors of war aren’t always content to stay in the shadowy past. In 1983, Lloyd was diagnosed with post traumatic stress disorder (PTSD) and manic depression. Doggedly, he persevered through those troubling times, finding focus and direction as he applied himself to new studies. Lloyd returned to his hometown of Dayton, Ohio, where he attended the Ohio Institute of Photography and Technology, earning a degree in commercial photography and a bachelor’s degree in electronics technology in 1987.

Lloyd went on to work as an architectural engineer for 20 years. He spent four years as lead designer for Deeb Construction Co., a premier homebuilder then located in Pasco County, and worked as a freelance designer for about 10 years, but he didn’t stop there.

“When I got back to civilian life, I never wanted to look back and say, ‘I wish I would have…’ so I’ve done a lot of different things. I’ve been a paramedic, drove stock and sprint race cars, drove hydroplanes and skydived for a while,” he recalls. “I’ve always had a hunger for education and wanted to try new things as I’ve gone through life; I just enjoy the experience of learning.”

Lloyd lived and worked in Carson City, Nevada, from 1972 to 1977 and especially loved exploring Western ghost towns. He was even commissioned by the Nevada State Museum in Carson City to make a model of Virginia City showing a cutaway view of the mountain and the mines beneath the town.

Another interesting commission was that of a 17-room Victorian house in Ohio. The homeowner requested that he make a 1/12th scale duplicate of her actual home. That project took Lloyd nearly two years to complete.

Lloyd recently met with Scott Mitchell of the Silver River Museum in Ocala about doing a commissioned replica of one of the original Old Florida Cracker homes there on the property. He’s already started working on the project, which will be 1/12th scale, and is excited that the piece will be on exhibit at the museum upon completion.

Like most artists, Lloyd finds inspiration in many places. It doesn’t hurt that he’s traveled extensively, including Japan and the Australian Outback. Closer to home, he’s gone to all but four of the 50 states and fell in love with the American West when living there. The Ohio native has had the opportunity to live and work in numerous states and has called Ocala home since 2001.

He often takes photographs of old buildings when traveling and likes to invent his own stories about them, if he doesn’t know the actual history. He refers to those photos when visualizing what he wants to create but admits that sometimes his miniatures evolve differently as he’s building them. That’s just part of the artistic process.

Lloyd’s detailed knowledge of how buildings are constructed has given him an insider’s view of how structures age, weather and decay. This allows him to make his miniatures totally lifelike.

And make no mistake; the man is a perfectionist when it comes to his craft. Over the years, he’s learned which materials work best for particular projects and has developed techniques that provide startlingly realistic results.

For example, because he often creates miniatures based on old, weathered structures, Lloyd is all about detail. He mills his own lumber, using primarily basswood, and often does the first stages of weathering that wood before he begins building. Using a mixture of India ink and rubbing alcohol he refers to as “instant aging,” he applies this concoction to the wood and… voilà! Sleek and new is suddenly transformed, taking on the appearance of lumber that is a century old.

Once the structure is complete, Lloyd adds additional weathering details specific to that building. He explains that old buildings naturally have stains and patterns where rain and dirt have left their mark over the years. His goal is to emulate these with his aging techniques.

Look closely at his work and it’s as though you’re looking at a photograph of an aged structure caught in time. That’s exactly the result for which he strives.

“I’ve always had an interest in old buildings and find a certain beauty in decaying structures; I love the colors and textures. As an architectural engineer, I know how structures are built and conversely, how they decay,” he notes, adding that buildings in the arid climate of the American West age differently from those in the East or South where there is more moisture.

For the most part, Lloyd’s miniatures are aged and weathered structures, and he tends to build a tiny landscape around each one.

Take, for example, the two-seater outhouse (one side was for adults, the other for kids) modeled on a real outhouse that stood on his uncle’s farm in Springfield, Ohio.

“The outhouse is probably the pinnacle of my work, very unusual subject matter,” he laughs.

He recreated in 1/12th scale the outhouse just as it was… right down to the catalog inside (no toilet paper in those days!), the jumble of weeds and debris scattered by the fence with the occasional missing board and the battered trellis topped by a tiny birdhouse. Lloyd painstakingly made his own “bricks” for the outhouse’s foundation, carving them from Styrofoam or Fimo clay and then casting the tiny bricks in resin for truly lifelike results.

He also recreated the well from his uncle’s Midwestern farm. For subjects like this, which are based on real objects, Lloyd usually gathers measurements, takes photos from various angles and does sketches before he starts building. Other times, he’ll create a miniature from memory or builds one structure that is actually a conglomeration of several different buildings.

His architectural background comes in handy. After all, he’s still designing and building structures—just miniature versions. Lloyd does the framing on his tiny projects with stud construction just as one would in a regular-sized building and then proceeds to build it just like it was life size. The outhouse, with all its intricate details, took him four months to complete.

The past few years have not been without challenges. In 2009, Lloyd suffered his first stroke, which affected the entire left side of his body, as well as his speech and memory function. Miraculously, he regained his ability to speak and 90 percent of the use of his left arm, hand and leg.

A second stroke in 2011 was followed barely two months later by a heart attack, and then he lost his beloved wife in July 2012.

A lesser person would have thrown in the towel. Not one to complain, Lloyd credits his faith in God and his determination to live each day as he’s come through these soul-wrenching events. His passion for miniatures has been a significant part of his healing—both physically and emotionally. Not only has the work been therapeutic, but he also finds the entire process deeply satisfying.

“I have a deep love for miniatures, and it pleases me to express myself this way,” says Lloyd modestly.

Tucked into Ocala Plaza, a small strip mall off 36th Avenue just south of Silver Springs Boulevard, is Unique Antiques, a cozy shop literally brimming with a little bit of everything. Proprietress Kathy Rydin first met Lloyd when he came in and expressed interest in becoming a vendor. She was so impressed with Lloyd and his work that she offered him a prime spot in the shop’s front window.

“Miss Kathy has been wonderful and given me a venue in which to work. I’ve made a lot of new friends here,” says Lloyd.

Not only are Lloyd’s finished works on display at Unique Antiques, but you can watch him working on current projects. The shop also plans to offer “make-and-take” sessions with Lloyd where participants will pay a small materials fee to craft a miniature keepsake of their own with Lloyd’s instruction. After all, sharing his enthusiasm for miniatures with others is often the best part of Lloyd’s day.

You can catch Lloyd Cooper working on his miniatures at Unique Antiques from 10am to 5pm Monday through Saturday.