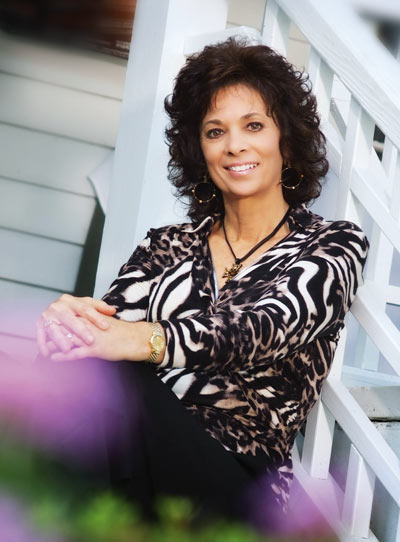 Dianne Goldsboro looks back at her life and sees one miracle after another. The wife of singer/songwriter Bobby Goldsboro, Dianne twirls her hair around one finger and smiles sweetly when she speaks about the past.

Born on April 18, 1960, in a charity ward in Lawrence, Massachusetts, Dianne was in a breach position with both legs wrapped around her neck. A lemon-size meningocele (sac) containing spinal fluid protruded from her back. It was a visible manifestation of spina bifida.

When she was two months old, the sac deflated. Dianne went blind and had to be rushed to the hospital. When the sac refilled with fluid, her vision returned.

Two months later, Dianne went through life-threatening surgery to remove the sac. However, the disability left her with side effects, including severe backaches, intestinal distress, and occasional paralysis in her legs, all of which plague her to this day. In 1992, a doctor told Dianne she should expect to be in a wheelchair or leg brace within a year of his examination.

“I would not accept that,” says Dianne. “I proudly walked in there after four months and said, ‘Look at me now.’ I refused medicine. It was just physical therapy that strengthened my leg muscles, my ab muscles, and my lower back muscles. I have a very strong determination that says, ‘I’m not going to be sick.’”

A Christian since the age of 15, Dianne believes God had a hand in helping her defeat the challenges of spina bifida.

“I think how Christ has made a difference in my life and how I am really watching his hand at work,” she says. “I think I’ve crossed over to a place in my life where I just say thank you. I’m happy. I’m peaceful.”

Though Dianne describes herself as a survivor, she acknowledges that it was her mother’s love that got her through those early years. Joan Roberts would not give up, even when doctors said her baby wouldn’t survive.

Now 76, Joan has recorded, in a loose-leaf journal, details about those early days in the hospital.

“They would not let me see her,” she wrote. “I wrapped (myself) up in a sheet and went looking for my daughter and found the room she’d been put in. I picked her up and headed back for my room. She was two days old. I never let anyone take or touch her in the hospital and I went home with her in a taxi on day five.”

During the months that followed, Joan massaged her baby’s arms and legs several times a day. She kept Dianne in a doll carriage next to her bed, placed her face-down on her stomach, and devised a foam ring from sofa stuffing and sterile gauze to protect the protruding sac. And, she checked daily to watch for signs of hydrocephalus (water on the brain). It never happened.

But the struggles went beyond the physical. After Dianne’s parents divorced, her mother moved the family to Ormond Beach and later settled in the Ocala National Forest where Joan ran Half Moon Fish Camp for many years. They were poor, but the family was close-knit.

Affectionately known as “Dee Dee,” Dianne credits her siblings for helping her lead a normal life. She just couldn’t justify sitting around feeling sorry for herself.

“Of course, having two brothers kept me active, learning how to target shoot, wrestle, and climb trees,” Dianne says. “We would flip a small john boat upside down and it would be all slimy and nasty and we would fight to see who could get to the top and be king of the hill. If it was raining, we would do puzzles and play games inside and watch TV.”

In 1984, while Dianne was sitting on the front steps of the fish camp’s office, a handsome stranger pulled up in a blue Jeep Laredo. At the time, Dianne had no idea who Bobby Goldsboro was. The popular entertainer had built a vacation home on 123 acres nearby and had come in to buy groceries.

“I thought to myself, that’s the first good-looking man I’ve seen here in a long time,” says Dianne. “He was clean-cut compared to the long-haired kind of a guy chewing tobacco and smoking a cigarette. I had a lot of guys come out there and ask me out, but I wasn’t into the dating thing. I was 24 and really shy. I was just into going to church and being with my mom.”

Bobby made a couple return visits, sometimes to the gift shop across the street, where he inquired about the pretty girl at the fish camp. During their third meeting, he invited Dianne out for coffee.

“He only introduced himself as Bobby,” says Dianne. “He actually had to play a song for me and I said, ‘Oh, my gosh! Yeah. I think I remember that song.’ He brought me back here and showed me the home he had built. He called me every day. In November, he asked my mother—he’s such an old-fashioned man—if he could marry me, and on Christmas Eve, he gave me a beautiful diamond ring set.”

Bobby courted Dianne for a year before they were married in April 1985. For Dianne, who had struggled with illness and poverty for most of her life, it was a fairytale come true.

“Bobby told me he felt like it was a Cinderella story,” says Dianne. “He had to physically, emotionally, and mentally prepare me for getting married. He hired someone to help me with my hair, makeup, and clothing, things that I didn’t know anything about, not to change me, but, because I was so poor. I used to walk down a dirt road and pay a woman three bucks to cut my hair.”

From the time they said “I do,” the Goldsboros have been involved in charitable giving, primarily with organizations that help children with disabilities, such as Easter Seals and the March of Dimes—an organization that helped her family when she was just a baby.

When Dianne was diagnosed with spina bifida, the March of Dimes’ Boston Chapter stepped in to help with expenses. They sent a registered nurse who offered assistance with food, baby items, and transportation to the hospital. After Dianne’s family relocated to Florida in 1982, other March of Dimes chapters continued to help.

“If not for the March of Dimes, I probably wouldn’t be here,” says Dianne.

Unable to have children of her own, Dianne recently turned her attention to the March of Dimes chapters in Ocala and Gainesville. The Goldsboros have donated several thousand dollars worth of Swamp Critters merchandise for fundraisers, and they offered the use of life-size costumes for March of Dimes events.

“The March of Dimes people, their hearts are truly there,” says Dianne. “They know my story and they were just moved to tears with it. Being that Bobby is a celebrity anyway, we can help. We’re available to bring awareness to the March of Dimes. We went to Shands Hospital and got to meet the preemies being born. You have doctors taking tumors out of babies’ brains. Those are the heroes. We just thank God that we’ve had this opportunity to do good things.”