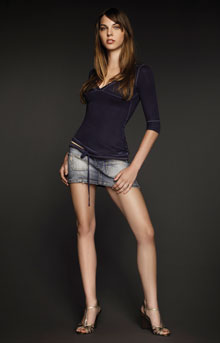 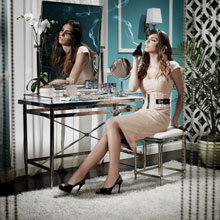 A bit of a tom-boy at heart, Kimberly Leyla Leemans has a passion for making the world a better place for animals. The Ocala resident also happens to be beautiful and vivacious, qualities which catapulted her into the ninth cycle of the popular reality series, America’s Next Top Model on The CW television network.

Viewers tune in on Wednesday evenings to follow 13 young women as they try to prove they have what it takes to succeed in the high-energy, high-stress world of modeling. Demanding photo shoots and other fashion “challenges” help the panel eliminate one participant each week. This year’s winner receives a $100,000 contract with CoverGirl cosmetics, a contract with Elite Model Management, and a six-page cover feature in Seventeen magazine.

Kimberly was eliminated in October when the group was cut from 12 girls to 11, but she raves about the experience and is more determined than ever to make a career in the entertainment business.

Born in Miami, Kimberly, 20, has called Ocala home for 15 years. Hurricane Andrew was reason enough to make her mother want to leave south Florida and the family relocated to Ocala. Kimberly graduated from West Port High School in 2005.

A huge fan of ANTM, Kimberly always enjoyed watching the show with her Mom, Josette, and her girlfriends. When auditions were held in Tampa, she tried out, but didn’t make it the first time. It wasn’t until a second attempt at auditions held in Miami that she made the cut.

As she recalls, the selection process was quick.

“If they didn’t like you,” Kimberly recalls, “it was, ‘Okay, thank you.’ If they liked you, they made you walk and do interviews.”

Until being selected as one of the pool of would-be models on ANTM, Kimberly had only done some local modeling.

“My dad’s been taking photos of me since I was born, so I was really comfortable in front of the camera,” she says. “But that’s nowhere near the contortions they expect in high fashion.”

Kimberly admits she was “star struck” upon meeting Tyra Banks, the show’s creator and executive producer.

“She’s intimidating, but inspiring,” says Kimberly. “The show is her baby and she takes it very seriously.”

“The trip to Puerto Rico for the semi-finals, getting sent to L.A., and living in a mansion in Beverly Hills for two months was awesome!”

Although the show sometimes plays up the “prickly” side of young, competitive women living and working together, Kimberly says all of the girls were fun.

“I’m still in touch with them,” Kimberly remarks. “Bianca and I were best friends. She is so funny, definitely the loud one in the house!” 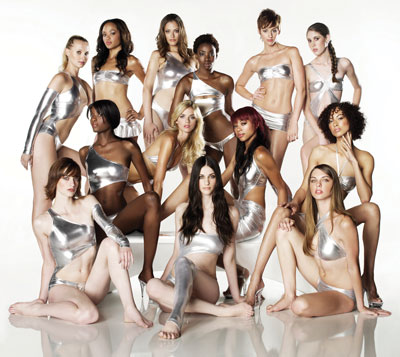 In an era when many young women battle eating disorders, it was refreshing to hear that none of those issues were evident on the show. In fact, the girls took turns cooking for each other—Kimberly’s specialty was spaghetti—and no one was shy about eating a hearty meal.

Having been a faithful fan of the show before being on it herself, Kimberly felt she knew what to expect, but admits the day’s fashion shoot is always a surprise.

“You just smile and go with the process,” she laughs. “That’s part of the whole modeling life—you get up and get going.”

Being eliminated from the show has done nothing to deter Kimberly’s plans for a career in the entertainment world. She hopes to be “made” in the next five or 10 years, whether her career is in TV, films, or as the next Tyra Banks.

“Modeling is a career that can take you all over the world,” says Kimberly, who has put her college plans on hold for the moment and is currently debating moving to either Los Angeles or New York in January. “You meet so many extraordinary people and get to transform yourself completely with hair and makeup.”

Although her ambitions lean towards the fast-paced world of entertainment, Kimberly’s heart is decidedly down-to-earth. Considering herself a “tomboy with style,” no one could accuse her of being too fussy.

“My best hairstyle is a ponytail,” she admits. “I love tennis, volleyball, going camping, getting dirty, and not worrying about my nails!”

Passionate about animals, Kimberly is enthusiastic about recycling, vegetarianism, and the “whole ‘going green’ thing.” Her dream is to start an animal rescue facility and she is an ardent supporter of animal rights. She’s worked for the Humane Society of Marion County and plans to return. Her duties there included socializing pets for adoption, scrubbing kennels, and walking dogs. She relishes any chance to help animals in need.

“Kimberly’s a wonder-ful employee,” notes Bruce Fishalow, one of her super-visors and a member of the Humane Society’s board of directors. “She helped socialize the dogs and that’s a very important function for us so the dogs are adoptable. She really took initiative and was very good at it. We’re proud of her.”

Kimberly’s family has been behind her every step of the way. She has an older half-brother and half-sister and parents who have been actively involved throughout her life.

You need to learn who your child is and help them find their gift,” says Kimberly’s mom, Josette. “My greatest wish for her is to be happy, to stay the person she is and follow her dreams.” 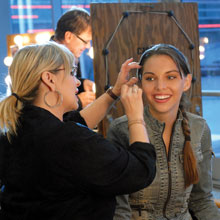 The models take part in a couture
runway challenge that sends one girl to Paris
on America’s Next Top Model on The CW.

Do You Have What It Takes
To Be America’s Next Top Model?