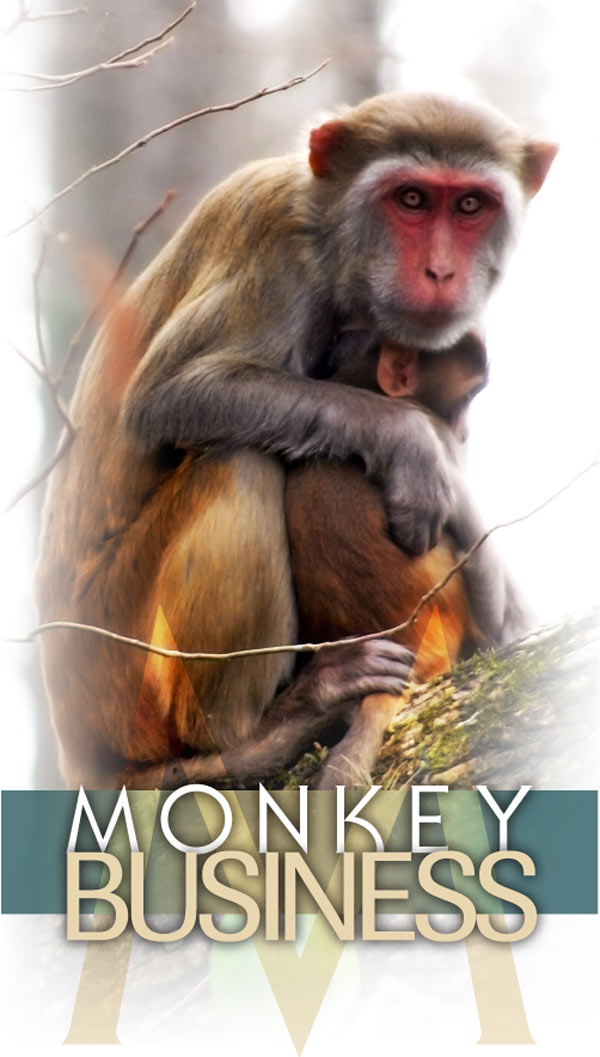 Amid years of rumors and speculation, the wild monkey population around Silver Springs has thrived despite many attempts to control the problem. In this Ocala Style special report, find out the origins of the controversial topic and why the seemingly harmless animals are no… Monkey Business.

Legend has it that the wild rhesus monkeys living along portions of the Silver and Ocklawaha rivers are descendants of escapees from a Tarzan movie set. While the real story is not nearly as colorful, this story is like its own blockbuster, involving a handful of colorful characters and many intricate plot twists.

The monkeys were actually introduced to Silver Springs in 1938, about the time the Johnny Weissmuller movies were being filmed at the attraction, but they had no connection whatsoever to the movie. The person responsible was Colonel (yes, that’s his first name) Tooey, a colorful concessionaire at the park who hoped to attract visitors to his river jungle cruise boats by importing a small colony of the monkeys. He settled them on a man-made island in the middle of the Silver River with the belief that the water would act as a natural barrier preventing them from swimming away.

William “Bill” Ray, son of Walter Carl Ray, one of the operators of the Springs, was just a kid then, but he was there when Tooey released the primates. 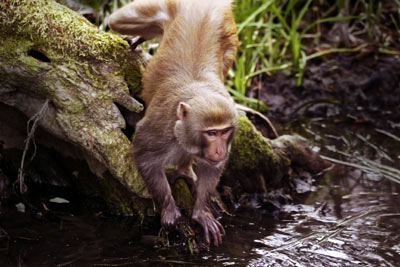 He says they not only knew how to swim, they flaunted their natural talents by swinging out from the trees and hitting the water with a loud “bam” before swimming off into the forest.

Fortunately for Tooey, the monkeys did not venture far. Instead, they stayed along the shoreline where they could take advantage of the endless supply of food delivered by the operators of Tooey’s cruise boats. Thus began the saga of the Silver River monkeys and their struggle to survive as an unprotected, non-native species trying to co-exist with humans in an ever-expanding urban environment.

When the older monkeys that were first introduced on the island started to die off, Colonel Tooey unwittingly upset the social order of the established troop by introducing a younger group of rhesus monkeys. The result was that the dominant females chased the young males off the island and into the surrounding woods. In time, the rousted males matured, formed their own troops, and went back to the island to raid away females from the original group. This led to a population explosion. The problem, as the state’s then-called Florida Game & Fresh Water Fish Commission saw it, was getting out of hand.

The monkey troops soon split—one occupying the south side of the Silver River, the other taking the north side. By 1986 a census conducted by Linda Wolf, a University of Florida researcher, showed the total number of monkeys along the river had reached 350. 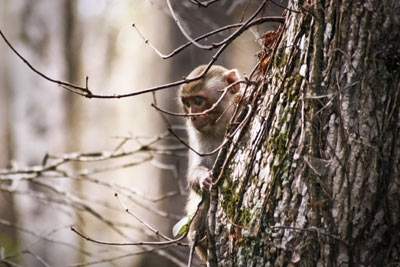 Back then, Lt. John Moran was lead inspector for the FGFWFC in Ocala (now called the Florida Fish & Wildlife Conservation Commission.) He informed the new operators of Silver Springs on several occasions that their monkeys were getting away from their park and that his agency had received complaints downriver of people’s sheds being raided, of dog food supplies being pilfered, and of hunters shooting monkeys.

“I kept telling them their monkeys were leaving,” he says, “but they kept saying they weren’t their monkeys.”

The owners, Moran said, took the position that when they purchased the park from the previous owners—and while that sale included Tooey’s jungle cruise boats—the concessionaire’s monkeys weren’t part of the deal. Moran says the park owners doggedly stuck to this position for nearly ten years.

Things finally came to a head, says Moran, when an anthropologist from the University of Florida conducting a study of the monkeys discovered that animal traders were capturing and selling off the very monkeys she was studying, including some she had photographed and even named. According to Moran, she complained to the owners of Silver Springs, who then filed a complaint with the Marion County Sheriff’s Office that their monkeys were being stolen. The story hit the papers.

“I went to the operators,” Moran recalls, “and said, ‘Now, let’s talk about your monkeys.’” 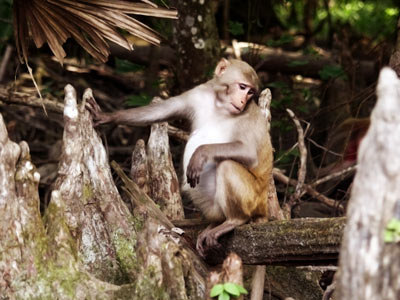 The incident, he says, prompted a long series of discussions and reports. By the late-‘80s and early-‘90s, the pressure to accept responsibility for controlling the monkey population reached a breaking point. Faced with the threat of state fines and the fear of lawsuits should a park visitor be bitten, the operators of Silver Springs decided to reverse their long-held position.

At that point, Moran says, the park instituted a variety of methods for population control. This included sterilizing the females via hysterectomy, a procedure performed by the College of Veterinary Medicine at the University of Florida, and sending some to a zoological park in Missouri. But when the public learned that some of the monkeys were being sold to an animal supply company for medical research, there was an outcry against the policy. Concurrently, state wildlife officials were suggesting that the entire rhesus population should be eliminated by euthanasia because they were a non-native species.

In 1992, 11,000 people signed petitions in support of the monkeys. The Ocala Star-Banner asked its readers if they wanted free-ranging monkeys to stay along the Silver River. The response was overwhelming to the affirmative, and soon an activist group calling itself Friends of the Silver River Monkeys sent a brief in support of the monkeys to the Department of Natural Resources claiming the rhesus enhanced the Silver Springs area and were not a health concern to humans.

In 1994, a study commissioned by the Florida Game & Fresh Water Fish Commission took a detailed look at all sides of the monkey situation. The report concluded that the commission’s exotic species policy be enforced and that the monkeys be eliminated. The recommendation was never implemented. 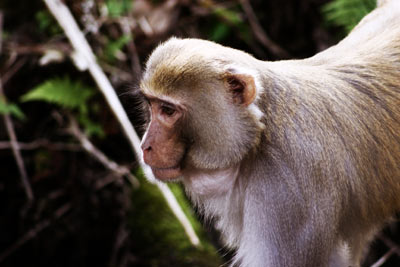 Today, 16 years later, the controversy surrounding how to control the monkey population is so touchy that Tish Hennessey, the founder of the now-inactive Friends of the Silver River Monkeys, refuses to discuss the matter. While she still champions their right to remain on the river, she feels the less attention brought to the matter, the better.

This was all she was willing to say on the record: “If I can be of assistance to the monkeys, night or day, I’m here for their welfare.”

Today, systematic thinning of the free-ranging monkey population does take place, albeit quietly and out of the public eye. Several state agencies oversee the process. Under terms of its lease with the Florida Department of Environmental Protection’s Division of State Lands, the operator of Silver Springs is obligated to remove all free-ranging monkeys from its property. The attraction can also access the Silver River State Park next door to further those attempts. How the monkeys are removed is left to the attraction’s discretion.

Once a year for the past five years, a licensed trapper from Beaufort, South Carolina, comes down and traps as many of the monkeys as he can. The animals are then sold to a South Carolina biomedical research firm that provides non-human biological materials to the scientific community worldwide. 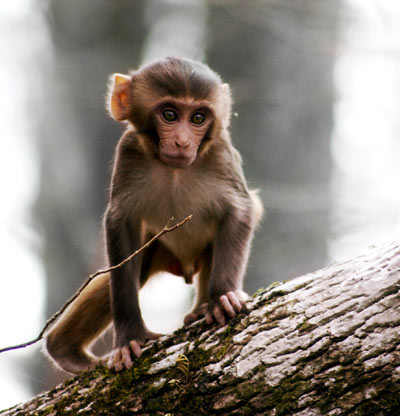 Although the DEP oversees the removal of the rhesus from the Silver Springs attraction, it has no policy for removing or controlling the monkeys within the boundaries of the 5,000-acre Silver River State Park that borders the attraction. This has in effect created a safe haven for the rhesus within the park’s borders.

“There is no requirement to remove monkeys on state park property,” says DEP spokesman Doug Tobin.

“There is nothing written down on what we do with monkeys,” he says, noting the park has other exotic removal procedures in place, such as taking care of feral hogs. LaMont blames the controversial nature of the monkey problem on Tallahassee’s failure to formulate a policy. “They got so beat up back in the ‘80s and ‘90s, they don’t want to deal with it.”

Rhesus monkeys are predominately vegetarian. In their native habitat of northern India they consume mostly plant life and insects. On the Silver River, however, they enjoy a richer diet of half-eaten sandwiches, bread, hamburger buns, potato chips, Cheetos, and whatever else is thrown to them by boaters.

It is, of course, against the law to feed them, but enforcement is almost non-existent. Most of the signs once posted along the waterway warning boaters not to feed the wildlife have either fallen down or been stolen. Some of the monkeys have become so emboldened they have been known to climb aboard unattended boats moored to the shore and raid the food out of ice chests.

A darker aspect of the monkey problem also exists. They do bite and some of them carry diseases that are transmittable to humans. Some weigh up to 50 or 60 pounds and sport two-inch canines.

LaMont concurs that feeding the monkeys—besides being illegal—is risky, but believes that the chance of contracting a disease from a monkey bite is probably very small.

“They test all the monkeys they take out of here,” he says.

And for those readers who may be rooting for the monkeys, you’ll be happy to know that capturing them is by no means easy. The trapper has to navigate through the swampy, densely wooded shoreline where they hang out.

“The monkeys are not stupid,” says LaMont. “When they started the capture program, the trappers would dart the animals. That lasted about a year, and then the monkeys smartened up. As soon as they saw him coming in his boat, they were gone.”

The next time the trapper showed up, says LaMont, he used tranquilizer-laced candy. After the monkeys passed out, the trapper would simply scoop up their limp bodies and cage them. But the monkeys soon caught on to that, too. Now, LaMont says, depending on the height of the river and the time of year (fall and winter is best because the foliage is not as thick), the trapper may capture as many as 60 monkeys in a week using baited traps. If it’s a bad week, he may come away with only 30. LaMont concedes that the trapping does seem to be holding down the monkey population.

“There aren’t as many as there were back in the early-‘90s,” he offers. “It’s doing something.”