Weighing in at 10,000 pounds, standing 11 feet tall and expanding 10 feet wide, these mammoth creatures reach speeds of 100 miles per hour as they fly through the air with the greatest of ease, crushing all lesser beasts in their paths. Whether you have kids or are a kid at heart, Monster Jam is a pulse-pounding event you won’t want to miss.

Ocala Style spoke with Whit Tarlton, the driver of Monster Mutt, to learn what it’s like to be behind the wheel of a monster truck.

How did you become a monster truck driver?

A good friend of mine, Gary Porter, started in monster trucks back in ’85. He was up driving the Grave Digger and needed a driver. At the time, I drove The Ninja Turtle truck. He asked me if I wanted to be a driver, and I went and tested for him. I drove the Monster Mutt for two years, then the Spider-man for two years and now this is my second time back in Monster Mutt.

I like it a lot. It’s got the ears, the tail and tongue. It’s like a magnet to the kids. That’s one great part of it. My kids are all grown up, and I can make some kids happy. That would be the biggest perk of driving the Monster Mutt—just making the kids smile.

What’s the craziest thing that’s happened to you during a show?

I guess it was the craziest and the worst, my truck caught on fire in Houston. That was probably the worst experience. I dislocated my shoulder one time and broke my collarbone, too.

Do you get nervous before or during shows?

No, I guess it’s just like another day at the office. If I’m nervous about anything, it’s just about wanting the truck to stay together so I can put on a good show.

What does it feel like to ride in the Monster Mutt?

It’d be like operating a piece of heavy equipment on steroids. You’re just constantly trying to make decisions: how to maneuver the cars, when to turn, if I need to gear down. It just starts running away with you in a sense.

Was it difficult to learn how to do all that?

It pretty much comes down to you’re either going to get it or you’re not. Thinking it out isn’t going to work because nothing ever goes as planned. It takes time to get the feel of the trucks. If you get the feel of how it runs, you can put on a good show. 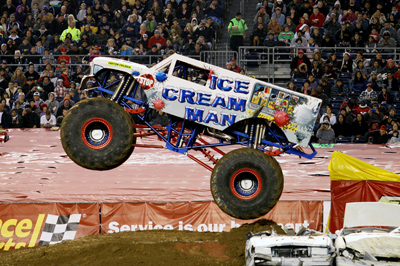 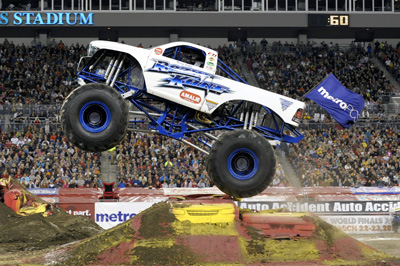