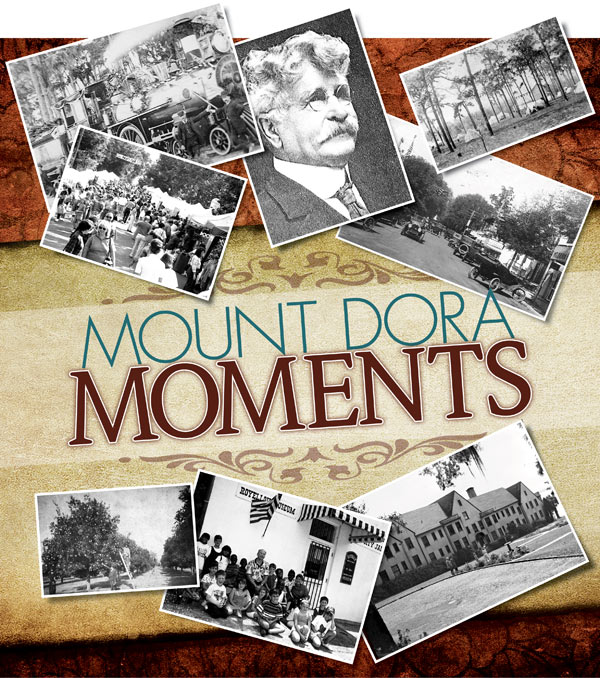 Mount Dora’s streets are abuzz this month and for good reason. This quaint, quiet town has come to life in celebration of a big milestone—the city’s 100th birthday. The real* story of Mount Dora, however, began long before its incorporation in 1910. In this piece, Lake & Sumter Style takes a look back at some of the city’s defining moments.

*An accurate portrayal of history relies on good record‑keeping and a general consensus, which isn’t always easy to achieve to say the least. But thorough research using several sources produced the following historical highlights. 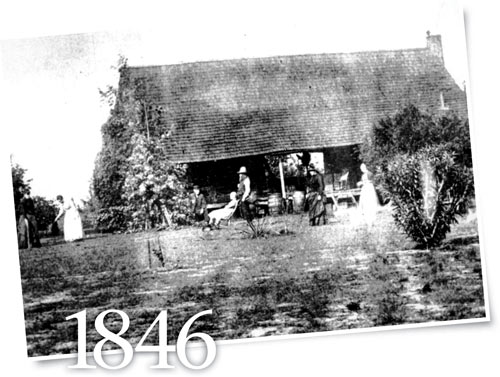 United States surveyors named Lake Dora for one of the area’s earliest settlers, Dora Ann Drawdy, because of the hospitality she showed to them while completing their work. According to reports published by the earliest Lake County historian on record, Professor William T. Kennedy, Dora Ann and James Drawdy were the first permanent settlers (home above) to what would someday become Mount Dora. They moved to the area from Georgia with their three small children, Daniel, Martha, and Mary Ann. Records show that James Drawdy was a Civil War veteran and died in Richmond, Virginia. Dora Ann went on to re-marry several times and have additional children. 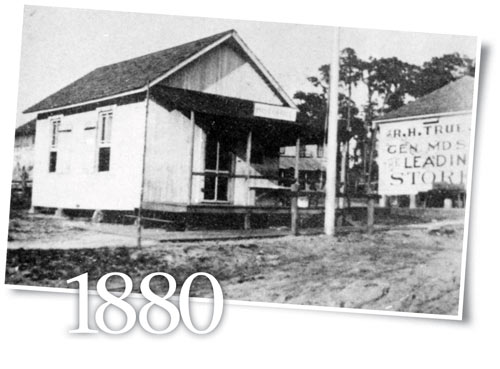 What’s In A Name?

The postmaster’s children serve as inspiration for a name change.

The town is renamed Royellou after Ross C. Tremain’s three children, Roy, Ella, and Louis. During this time the first post office (above) was also established with Mr. Tremain serving as postmaster. Even though the town would eventually change its name, the name Royellou lives on. Today the Mount Dora Historical Society sits on Royellou Lane. 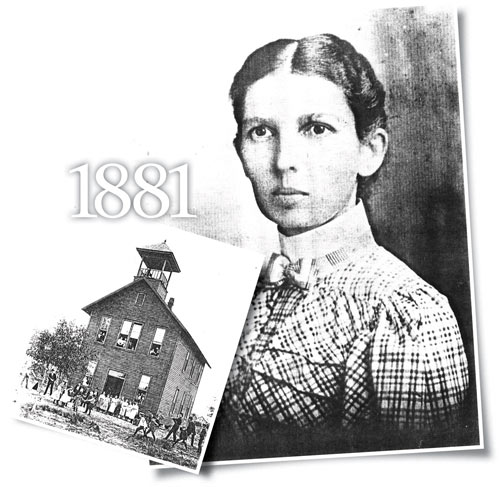 White children attended during the regular school year while African American children attended at other times. According to Through Schoolhouse Doors: A History of Lake County Schools, “the first school in Mount Dora opened in a log cabin on the north side of Lake Franklin in 1881. The 15-by-20-foot lumber building contained a table for the teacher with boards laid across blocks for the pupils’ desks.” It’s believed that Edith Gates (left) was the first teacher to educate students in the Mount Dora area.

In 1883, the town decided on a name that reflected its history. “Mount Dora” was a tip of the hat to Lake Dora (and Miss Dora Ann Drawdy) as well as the mound on which the town stood. Mount Dora is 184 feet above sea level, a veritable mountain by Florida’s standards. Here’s some perspective, though: the state’s highest point is 345 feet above sea level in the panhandle’s Walton County. That’s still the lowest high point of all 50 states. Well, we try! 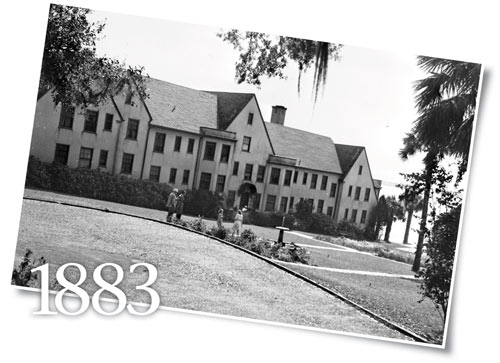 The Lap Of Luxury

Mount Dora’s first hotel features hunting for the gentleman and picnics for the ladies.

In the late 1800s, the 10-room, two-story Alexander House opened. In 1903 it became the Lakeside Inn, which is still in operation today. Famous visitors have included Thomas Edison, Henry Ford, Dwight Eisenhower, and Calvin Coolidge. According to lakesideinn.com, the first visitors to the newly constructed hotel were sports enthusiasts who arrived from the frigid north by boat. The male visitors enjoyed snake hunts and fishing while their female counterparts dined picnic style with fresh orange juice—considered a delicacy at the time. Today the hotel features 85 guest rooms, an Olympic-size pool, an award-winning restaurant, and an on-site spa.

Stop, er, start the presses! Mount Dora became newsworthy on April 23, 1886, with the publication of volume 1, number 1 of its first-ever weekly paper, the Mount Dora Voice. You won’t find one lying around these days, though. The paper closed its doors in 1916. 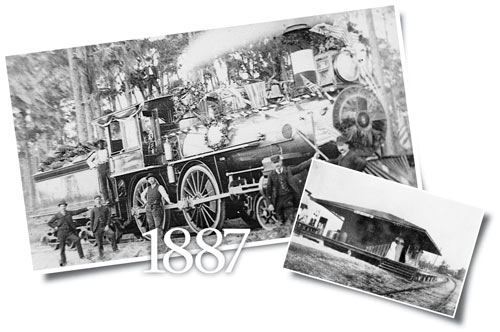 Mount Dora got a big boost with the completion of the railroad to the small town. It would take several more decades before the train station (above right) would be built; however, once completed in 1915, the station became a landmark. Today, the building serves as the headquarters for the Mount Dora Area Chamber of Commerce. 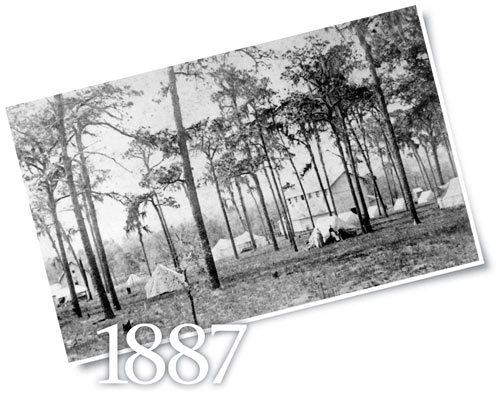 The Chautauqua campaign had people throughout the country praying, debating, and tapping their toes.

A Chautauqua was a popular social movement that began in the 1870s and continued through the 1920s. The ongoing event brought cultural entertainment to rural and pioneer towns and featured guest speakers, teachers, musicians, entertainers, and preachers. Theodore Roosevelt called it the “most American thing in America.” Mount Dora’s Chautauqua was located mainly in the Sylvan Shores area but had venues in other locations as well. Encyclopedia Britannica notes that the Chautauqua’s popularity led to the future establishment of community colleges and continuing education programs. In some areas of the country, Chautauquas continue to draw crowds even today. 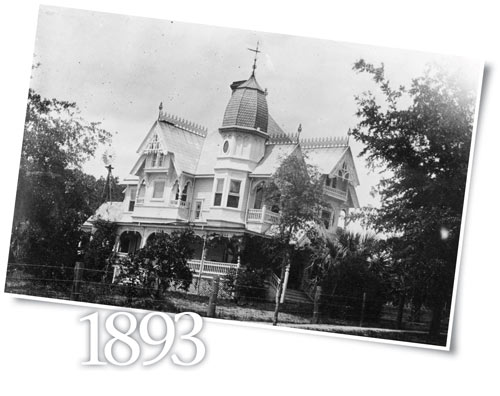 J.P. Donnelly builds his expansive Queen Anne style home in Mount Dora for himself and his wife, Annie.

Now a Florida Historic Site, the Donnelly House (above) is owned by the Mount Dora Masonic Lodge and is on the National Register of Historic Places. It features a wrap-around porch and an octagonal turret. J.P. had originally homesteaded 160 acres in 1879, but by marrying the former wife of William D. Stone, he was able to double his holdings. 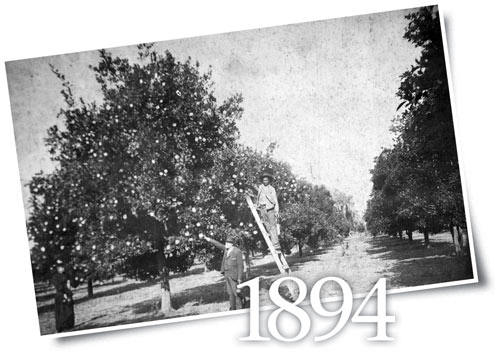 Just three years after Ross Tremain opened the first orange packing house in Mount Dora, the great freezes of 1894–95 wreaked havoc on the citrus crops. It was several more years before the produce industry fully rebounded. 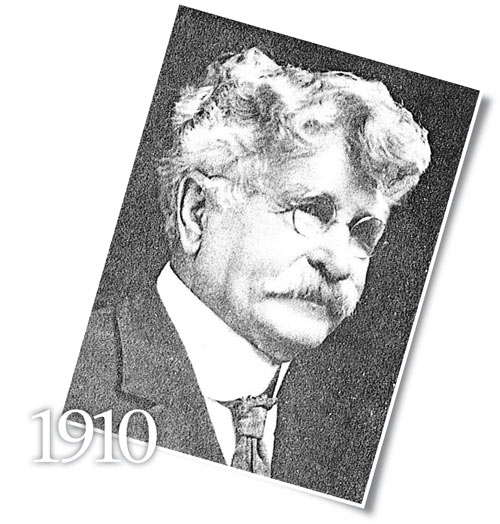 With a mayor elected, Mount Dora gets official.

With just shy of 400 residents, Mount Dora was granted a charter in 1910 and elected its first mayor, Captain John Philip Donnelly (right). The move was a timely one. By the turn of the century, the town boasted two general stores, two churches, a town hall, a drugstore, and a hardware store. 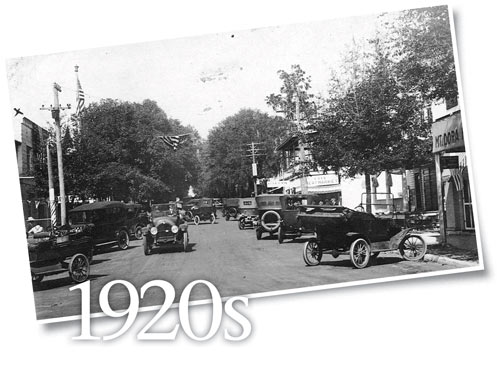 Why such rapid growth? In addition to the introduction and success of the automobile, Americans finally had the money and time to travel to Florida or other desirable locations. The 1920s saw increased wages and a variety of benefits for educated workers allowing them to invest in their futures, including the purchase of land. During this time Mount Dora’s infrastructure continued to grow at a steady pace and included the addition of streetlights, a water system, paved roads, and curbs. The town’s first public parks, Donnelly Park and Gilbert Park, were also opened. 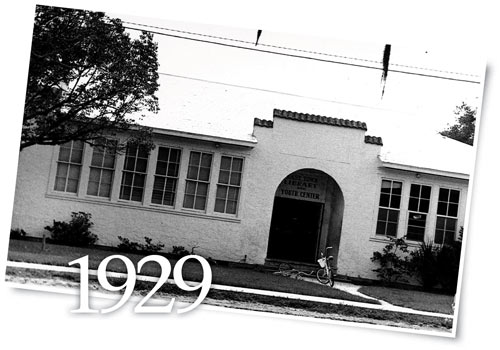 In the mid-1920s, Mount Dora churchwoman Mamie Lee Gilbert spearheaded an effort to raise money to build a school for local African-American children. Gilbert received a substantial contribution from retired Mount Dora Presbyterian minister, Rev. Duncan C. Milner. Together with the Milner donation, Gilbert raised enough money to qualify for a Rosenwald Fund grant. Philanthropist Julius Rosenwald, a partner at Sears Roebuck, had started the foundation to help build black schools in the South at the prompting of civil rights leader Booker T. Washington. Milner-Rosenwald Academy (above) opened in 1926. 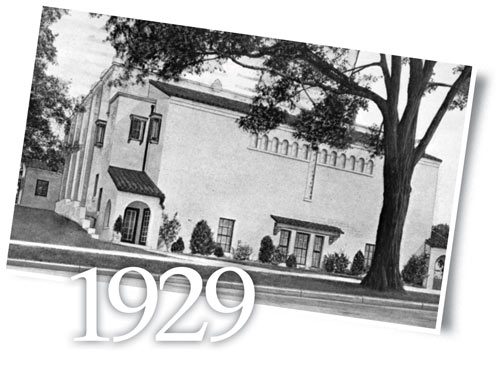 A Gift To The Community

The newly opened Mount Dora Community Building (above) featured a seat for every resident—approximately 800 at that time. It’s still in existence today and is currently being renovated to include improved seating, structural improvements, and an expanded lobby. The renovations began last summer and are expected to be completed this summer. Unfortunately, tough economic times are making it more difficult to raise the much-needed funds to complete the work. 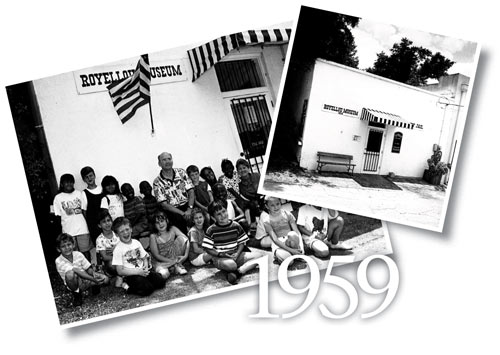 For A Past That Lasts

In the late-1950s, Mount Dora recognized the need to keep track of its colorful history, and so the Mount Dora Historical Society was established in 1959. The society is located within the Mount Dora Historical Museum, formerly known as the Royellou Museum. Today, the organization provides students as well as curious residents and visitors with detailed information about the city’s storied past, including access to photographs and artifacts. 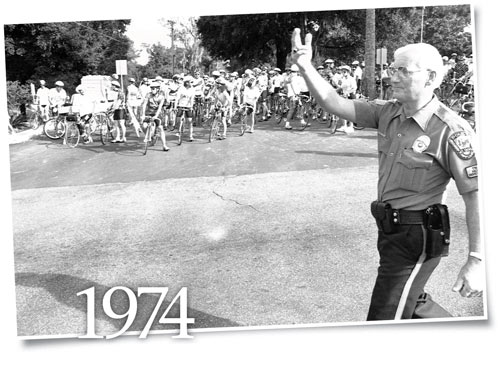 The ideal bike riding conditions in Mount Dora and the surrounding area lent itself nicely to the creation of an annual bicycle festival. Today, the Mount Dora Bicycle Festival is bigger than ever. Last year’s 35th annual ride attracted some 1,000 participants. It is the oldest and largest bicycling event in the state. 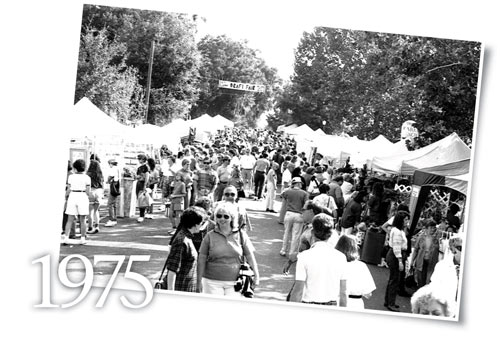 One year after the bicycle festival began, the town hosted its first art festival, which is now nationally ranked and brings nearly 300 artists from around the world to its downtown streets. In 1984, the city began another art tradition with the first-ever Mount Dora Craft Fair. This weekend-long event attracts over 250,000 to the downtown area each year and more than 350 crafters. Together, the Bicycle Festival and Craft Fair in October and the Art Festival in February continue to bring much-needed tourism dollars to the city. 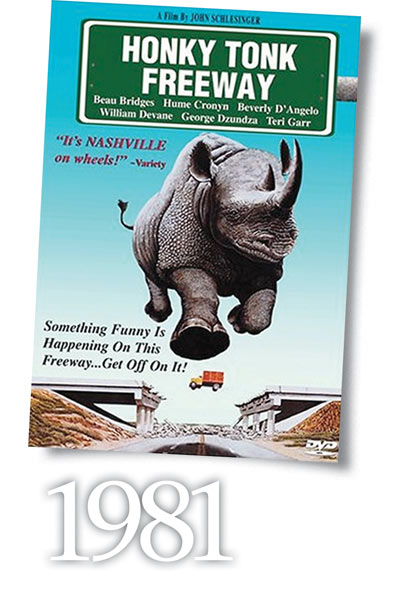 Hollywood converges on the quiet streets of Mount Dora… and paints them pink!

The movie Honky Tonk Freeway was filmed in Mount Dora. During production, many of Mount Dora’s buildings were painted pink. The film’s plot centers on the residents of Ticlaw, a fictional Florida tourist town. The residents are angered when they discover an under-construction freeway will not include an exit to their town. Sound like a blockbuster? Moviegoers at the time apparently didn’t think so. The movie grossed just shy of one million dollars—a fraction of the estimated $24 million it cost to produce it. Honky Tonk Freeway starred Jessica Tandy, Daniel Stern, Beau Bridges, Teri Garr, and Beverly D’Angelo. The feature film obviously didn’t win any awards, but it was nominated for a Razzie for worst original song: “You’re Crazy But I Like You” by Frank Musker and Dominic Bugatti. The movie is available for rental today, so check it out! 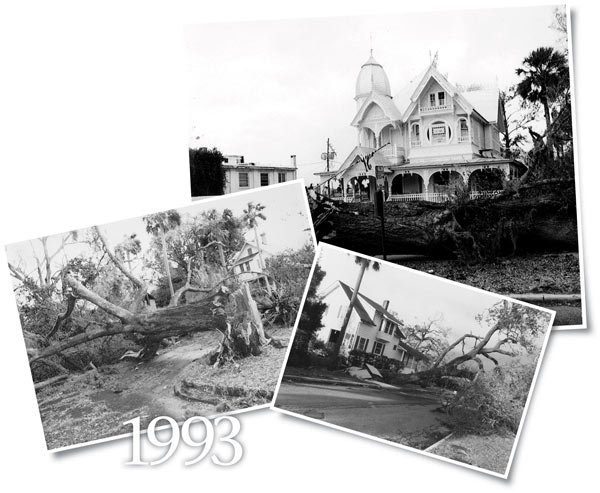 Storm of the century rips through Mount Dora.

A small, fast moving tornado tore through Mount Dora as part of Florida’s “Storm of the Century,” killing two people, including an infant. When the storm passed, 13 homes were destroyed, 80 suffered major damage, and 266 reported minor damage in Mount Dora. Throughout the state 47 people perished, including 14 from storm surge and flooding, seven from tornadoes and/or strong downbursts, and four from high winds in the aftermath of the squall line. The line of storms ushered in much colder weather and areas of the panhandle received upwards of four inches of snow following the severe weather. 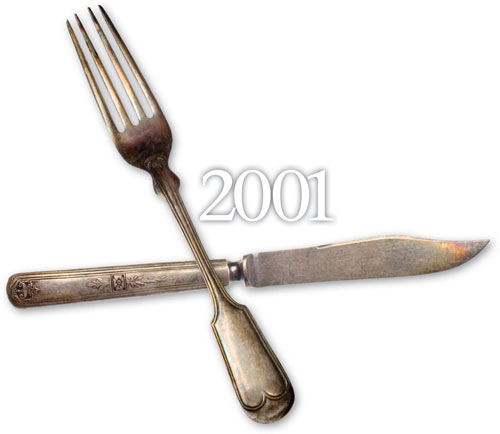 Mount Dora grabs a bite to eat with Taste event.

Food often plays a prominent role in traditions. In 2001, Mount Dora got the right idea by creating an annual event that center completely around food. Each year, Mount Dora’s top restaurants offer up their best culinary creations for sampling and judging at the Taste of Mount Dora, and residents dutifully come out to taste their fare. Winning restaurants are announced, but the real winners are those guests in attendance. 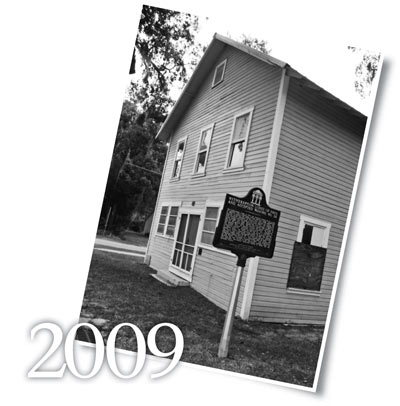 Mount Dora’s picturesque historic district is now listed in the National Register of Historic Places. In order to be eligible to be listed on the register, nominees must first meet eligibility requirements. In the months leading up to the listing, surveyors collected data on construction; building styles, features, and uses; and former owners. Also on the register is the city’s Witherspoon Lodge (above). Founded in 1898, it’s among the oldest African-American Masonic lodges in the state of Florida. The building was bought by lodge members in 1903 and they have met there ever since.

If you know of an important Mount Dora moment that didn’t make this article, send us an e-mail at comments@lakeandsumterstyle.com